Rapa Nui, the indigenous name of Easter Island, is a very peculiar place. Looking at a map, it is a tiny speck literally in the middle of nowhere, surrounded by nothing but thousands of miles of Pacific Ocean in every direction. The only way to get there is by flying five hours either from Santiago or Tahiti.

The island is famous for it’s mysterious giant stone statues, called moai. Archaeologists have documented up to 887 moai in existence here, all carved from porous volcanic rock and transported all across the the island- no easy feat! It is believed they were created as a system of prestige that had religious significance attached. With the exception of seven moai, all face inland with their backs to the sea. Also, interestingly, all of the moai were toppled sometime between the 17th and 19th centuries. There are a few theories that attempt to explain the reasoning, but the most common opinion is that they were toppled due to warring among tribes. By toppling their enemies’ moai they could destroy their morale and humiliate them. (Many of the moai have been restored to standing upright).


If you’ve ever been to Venice, you’ll understand when I say Easter Island feels very much like a living museum. There’s no one place to go on the island to experience it, there are no (well, hardly any) walls to contain it. You’re able to explore all the sites on your own once you buy a ticket- either at the airport or at the tourist office.


There are two sites that are limited to one single visit (the rest can be visited as often as you like). The first one of these we visited was Orongo. It’s a spot located on the westernmost part of the island where, post-moai era, the Rapa Nui people would gather as part of the Birdman ceremony.


This ceremony involved several men swimming out to the larger of the two islands in the background of the picture above and collecting an egg of a bird that nests there (the Sooty Tern). Whichever man was able to bring an egg back first would be the new Birdman, or leader, for the next year.

You can also see rebuilt stones huts here, replicas of the ones that were lived in during the Birdman ceremony. It’s very windy on this part of the island, so it would have been pretty miserable to live here year round!


It's also possible to see petroglyphs here, most representing the Birdman.

The second site that is a one time visit only is Rano Raraku, the quarry where moai were carved.


It’s quite an eerie feeling to see these moai descending down the mountain, or the half-finished moai remaining in their stone caverns. A stark contrast with most others on the island that are placed in a line on a platform. Also remember that the moai are like icebergs- there’s much more to the statue than what you can actually see. Most of it remains buried underground.


We took advantage of the few hikes available and got some pretty spectacular views. This picture above is on the way up to the highest point of the island, Terevaka (600m).

The island is definitely doable in two to four days if you’re willing to cram, as long as you’re lucky with weather and you don’t care about crowds- no problem. However, from what we’d read it seemed like most travelers wished they had stayed for longer. Knowing that it would probably be our first and last time going there, we opted to stay for seven nights. We definitely didn’t want to leave the island feeling like we didn’t get to do everything we wanted to do! We also factored in getting rained out half the time.

Seven nights were definitely enough, and we both left feeling ready to get back to the mainland 😜.

The island itself was very rustic, with our accommodations being very basic. We got the sense that even the fanciest, most well regarded hotel on the island would be considered at best a three-star hotel. The town of Hanga Roa (the only town on the island) is tiny, boasting what we estimated as 20-30 restaurants and cafes serving the entire island.

The whole island was connected by just a few roads, most of which were in serious disrepair, and large swaths which were dirt (or mud if it had just rained). It was odd to have cows, horses, and dogs constantly blocking the roads, roaming the island freely.

While at first this added to the feeling of remoteness, we experienced the severe downside of not having internet available when it was POURING rain outside, and we were trapped in our cabana with little to do. We did manage to finish up The Lord of the Rings Extended Trilogy.

The food on the island was exceptionally expensive, which made sense given that most food gets shipped in from mainland Chile, but it made going out to eat a rare and costly option. We opted to buy basic groceries and cook for ourselves as much as possible. However, the local tuna and freshly made fruit juices were absolutely amazing. 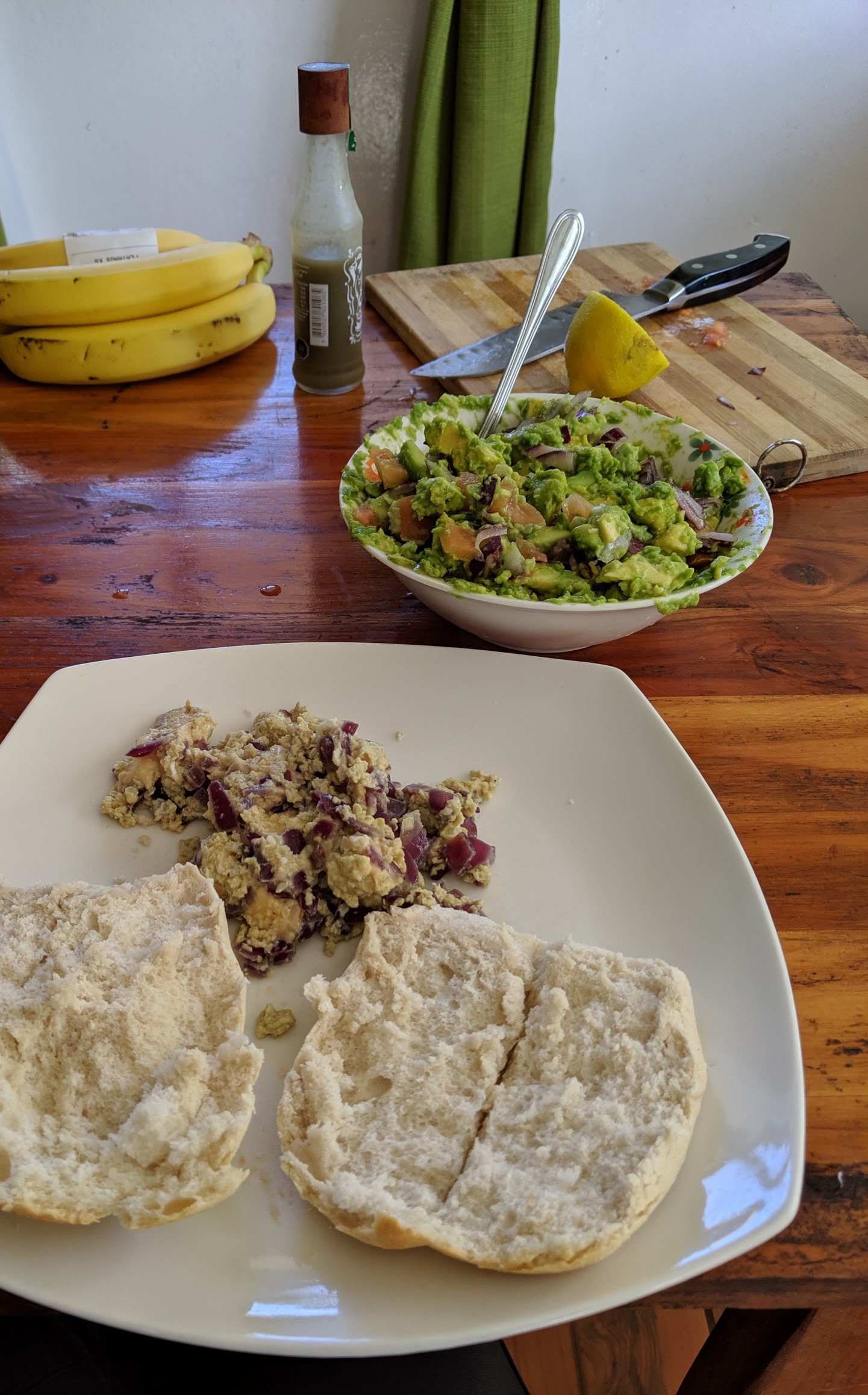 We weren’t entirely sure what to expect going to Easter Island, but the experience ended up being very unique. One shouldn’t expect a tropical vacation like someone might have in Hawaii or Tahiti, as it’s a very remote and underdeveloped place. However, the feeling of remoteness is unparalleled, the moai are impressive, and the views from the peaks of the volcanoes are spectacular. If you find yourself going to Chile, it’s certainly worth making the trip to Easter Island.

One final point: the preservation efforts for the moai are highly limited in scope, and they’re slowly fading away. We would recommend getting there ASAP before they’re gone.

As cool as Easter Island was, after seven nights there I definitely feel like we’ve exhausted the things to do and see on the island. Maybe if it was easier/cheaper to visit I might consider a future return, but the remoteness is a key component of what makes it cool and unique to begin with. Given that, I don’t see much reason to make the long trek out again just to see the same stuff.

We planned on spending slightly too much time on Easter Island on purpose. We definitely exhausted all the sights. It was cool to see but I don’t need to go back.

Conclusion: [Once Was Enough] (https://hotsauceandcoffee.com/tags/once-was-enough-dwntgb/)