We left Arezzo by train at 8:30 AM to Rome, dropped off our bags, explored Rome all day (by walking over 18 miles), then hopped on the night train bound for Sicily at 11:00 PM. Yes, you read that right: you can take a train to the ISLAND of Sicily. There are no bridges from the mainland. The train gets taken apart, car by car, and loaded onto a ferry for a short 50 minute boat ride, to then be reassembled onto the other side. We honestly thought this was a joke when we first heard about it, but we can confirm, this is in fact how it works.

The night train sounds like a great idea: why waste a day traveling when you can travel asleep? However, it’s only economical if you are a group of four people who want to share a cabin together. Otherwise, for a private two person room like we choose, it was more expensive than a hotel room 😱 (our Eurail passes didn’t help us here). Sure, I suppose we could have bunked with two strangers, but that wasn’t a very appealing option for either of us. We’re budget travelers, but I guess not quite THAT budget… 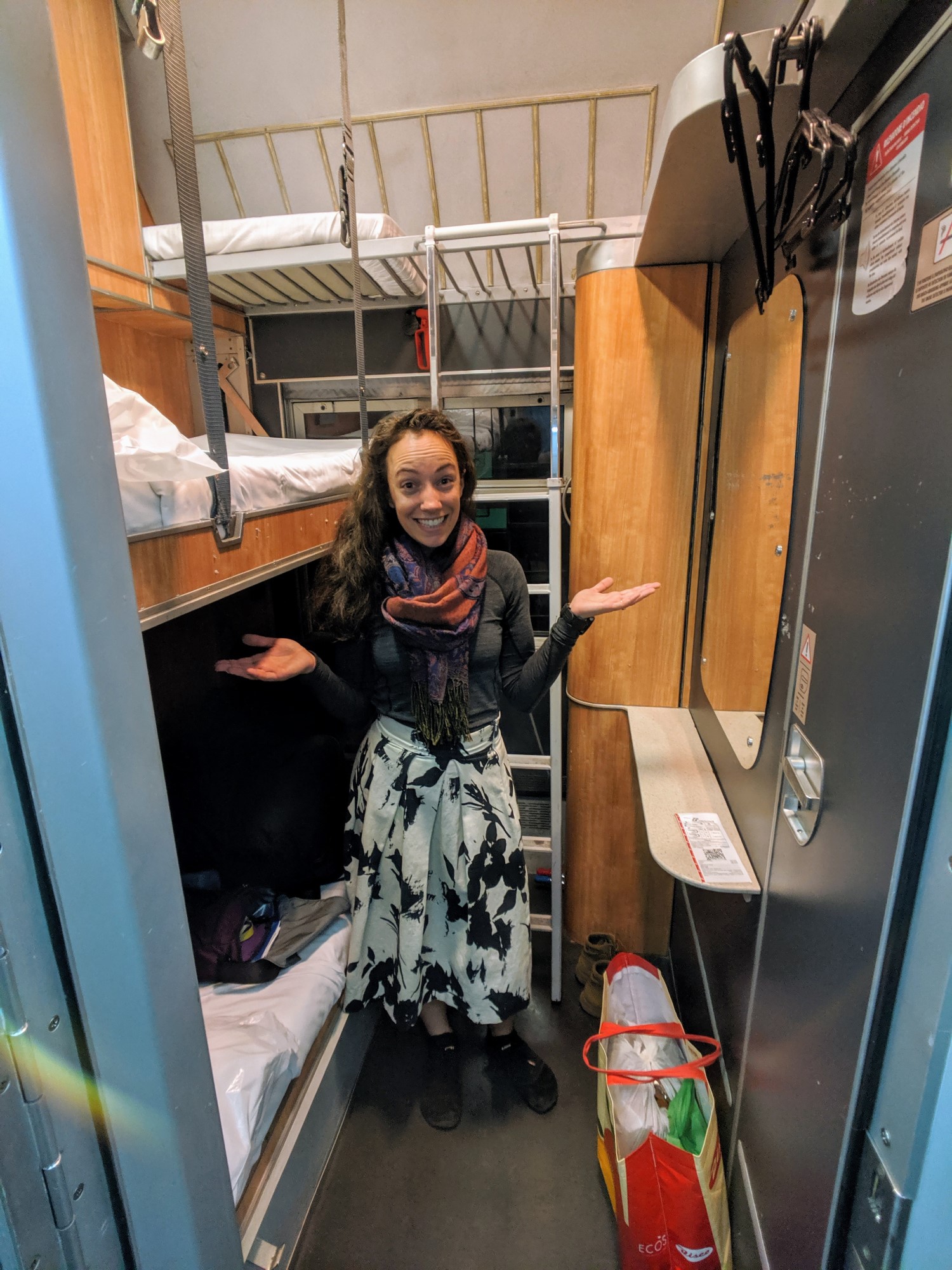 And what an experience it was, even just the two of us! It was close quarters, but the beds were surprisingly pretty comfortable. Neither of us slept very well, something about being jiggled along at high speeds with stops and starts along the way… Or maybe it was just the excitement? We thought certainly we would be dead asleep after racking up over a half-marathon’s worth of walking in Rome.

We finally arrived around 9:30 AM to Taormina, Sicily. We grabbed some arancini (fried rice balls), checked into our Airbnb, and proceeded to catch up on sleep for about three hours- it was badly needed rest.

Once we had slept a bit (and consumed coffee of course), we both felt human again and were ready to explore our new city.

I was hesitant to visit Taormina- on one hand my in-laws had highly recommended it, but on the other I had heard that it was “built for tourists with deep pockets.” We found it to be a beautiful place, built vertically along a mountainside overlooking the clear aquamarine water of Ionian Sea. Very clean, very safe, and thankfully, not terribly touristy. 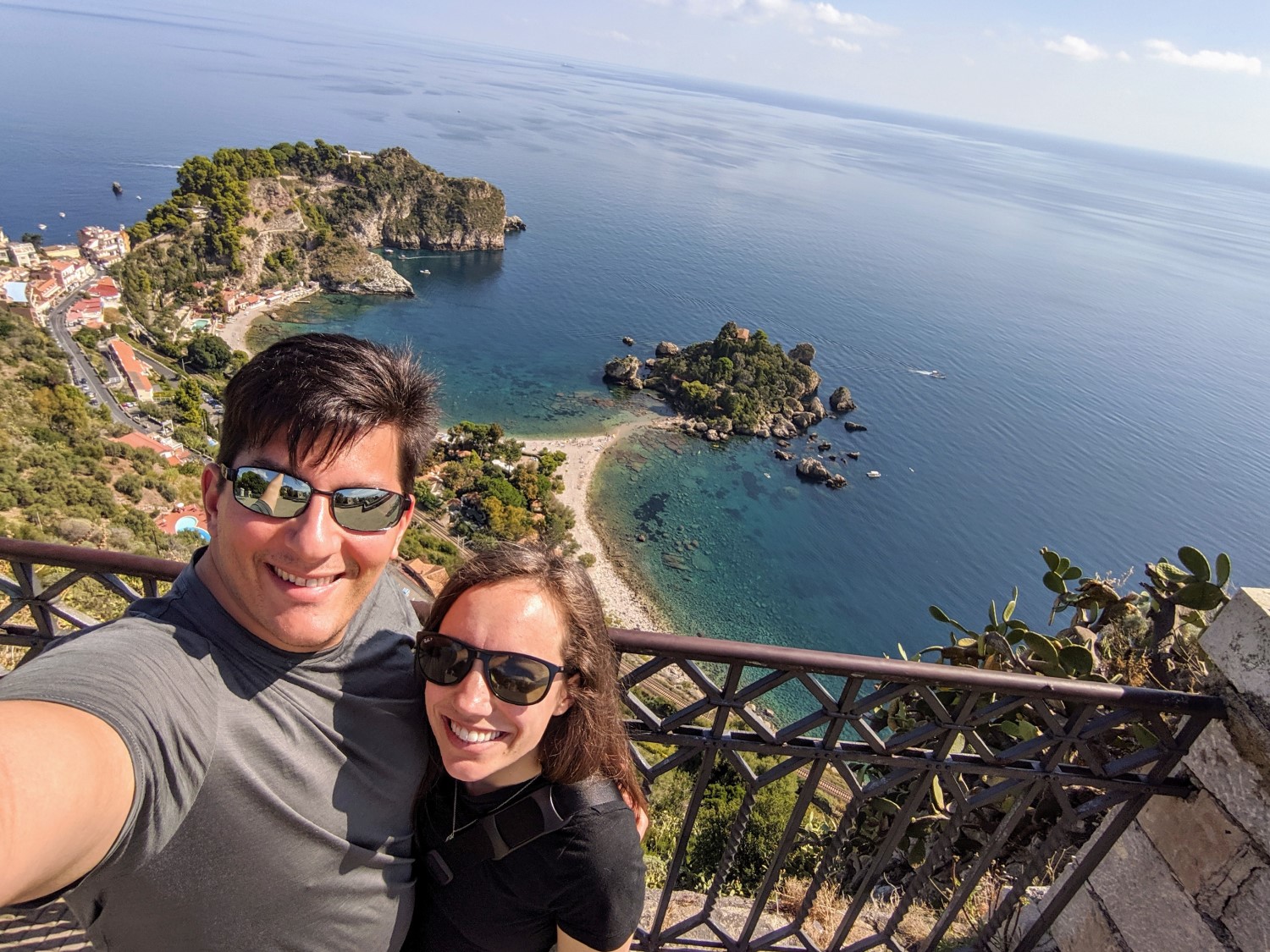 Sicily is full of delicous foods. Cannoli, arancini, granita… we devoured all these things in Taormina. The granita was especially delicious at Bam Bar, where my order was almond granita (with whipped cream, of course) and a brioche bun. Shockingly, despite seeming like an extravagant dessert, it’s actually the typical breakfast of choice in Sicily. 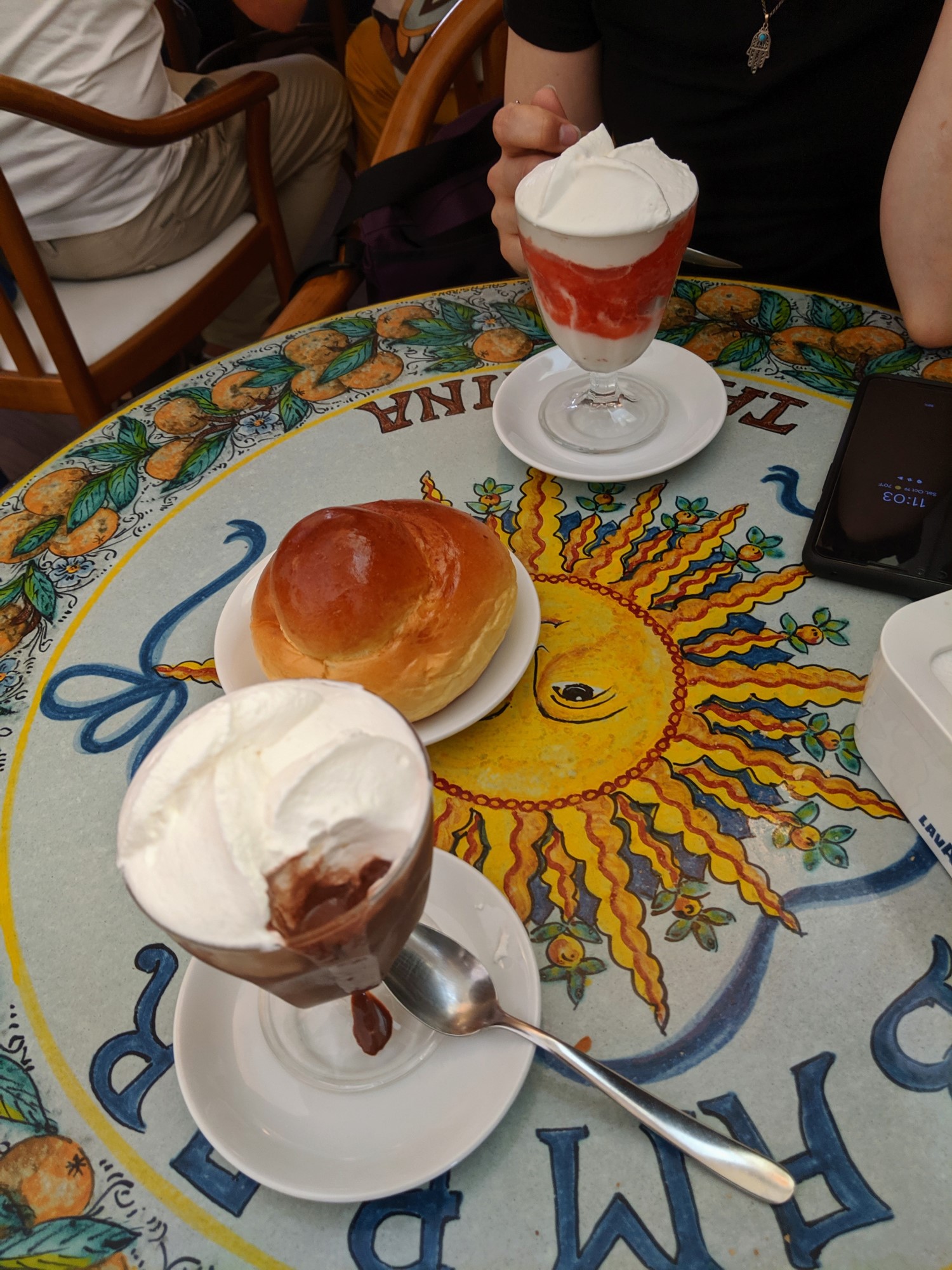 Another local delicacy was mandarinetto. I was familiar with limoncello before travelling here, but I have to say mandarinetto is the superior product. It’s just a tad sweeter and smoother, which made it more appealing for us.

Luckily, as during the rest of our trip, we had tremendous weather and even got a chance to swim in the ocean (in late October)! The water was full of colorful fish that weren’t afraid of humans. The beach was rocky, which I hear is typical of European beaches, but it didn’t stop people from enjoying the water. 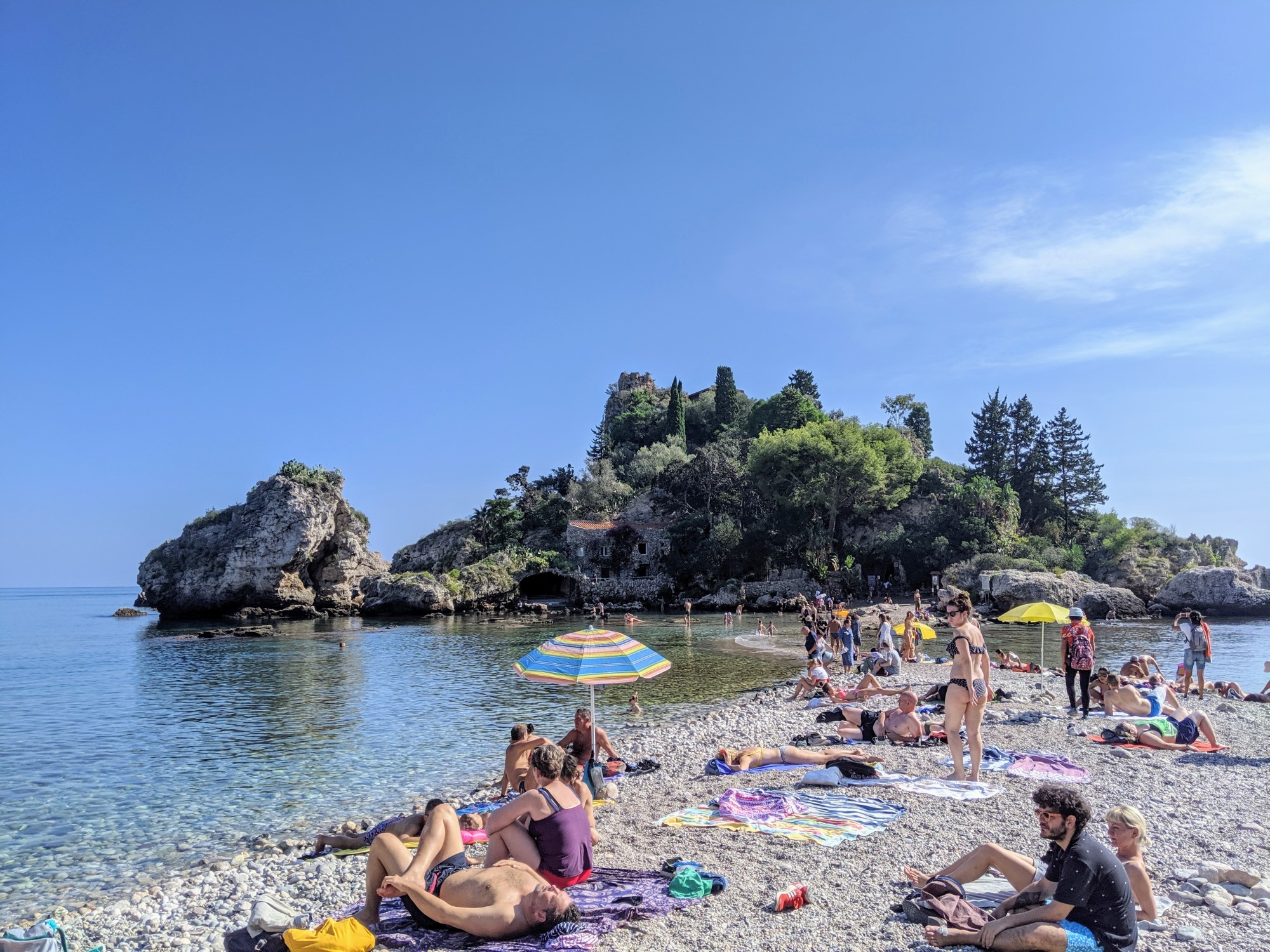 Taormina is home to an ancient amphitheater with a phenomenal view. Someone definitely knew what they were doing when they decided to build on this spot. Can you belive this is from the third century BCE? There continue to be events and concerts held here, which would be worth consideration if you find yourself in Taormina. Here’s a picture we took at the amphitheater with Mount Etna in the background: 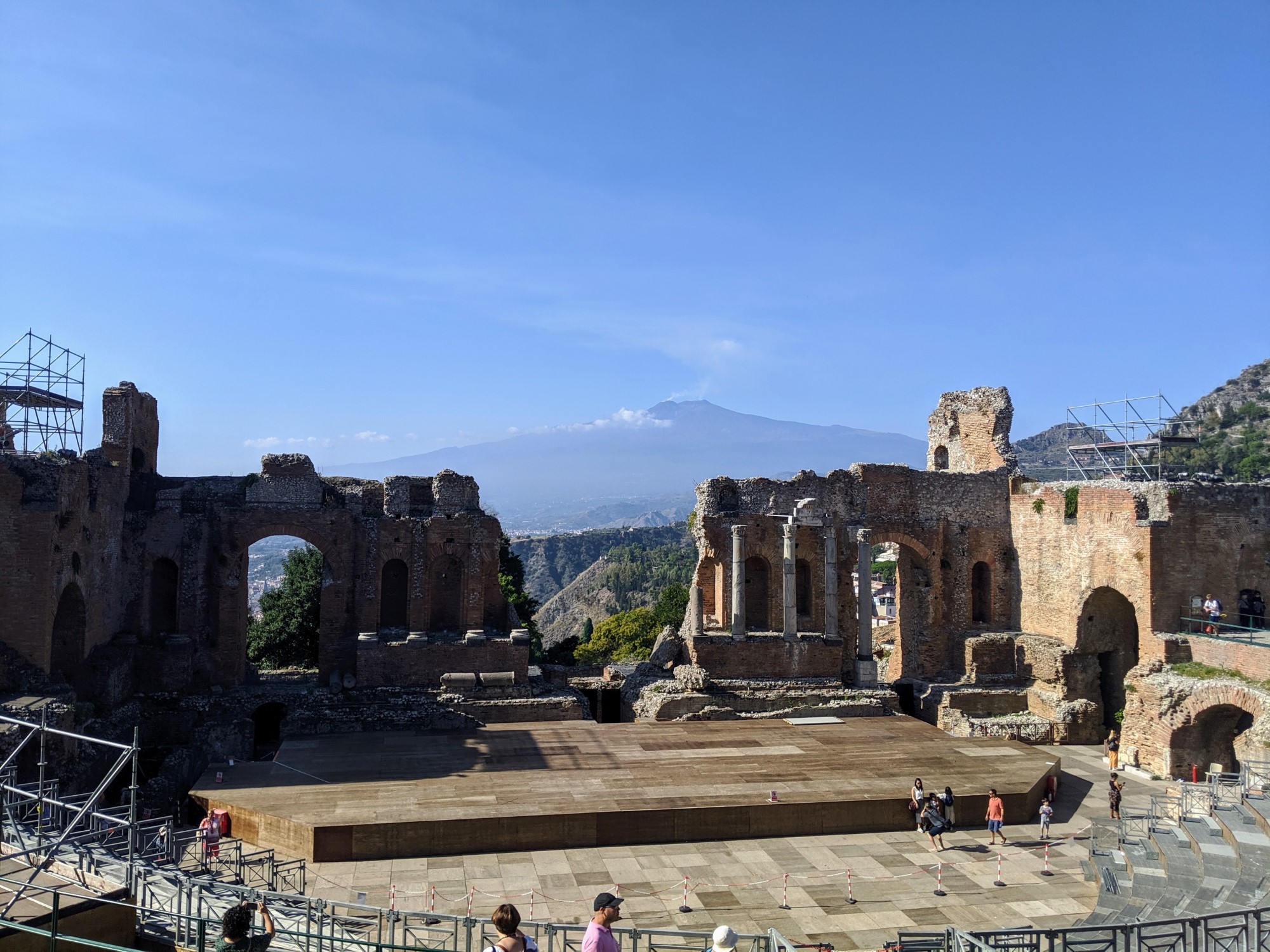 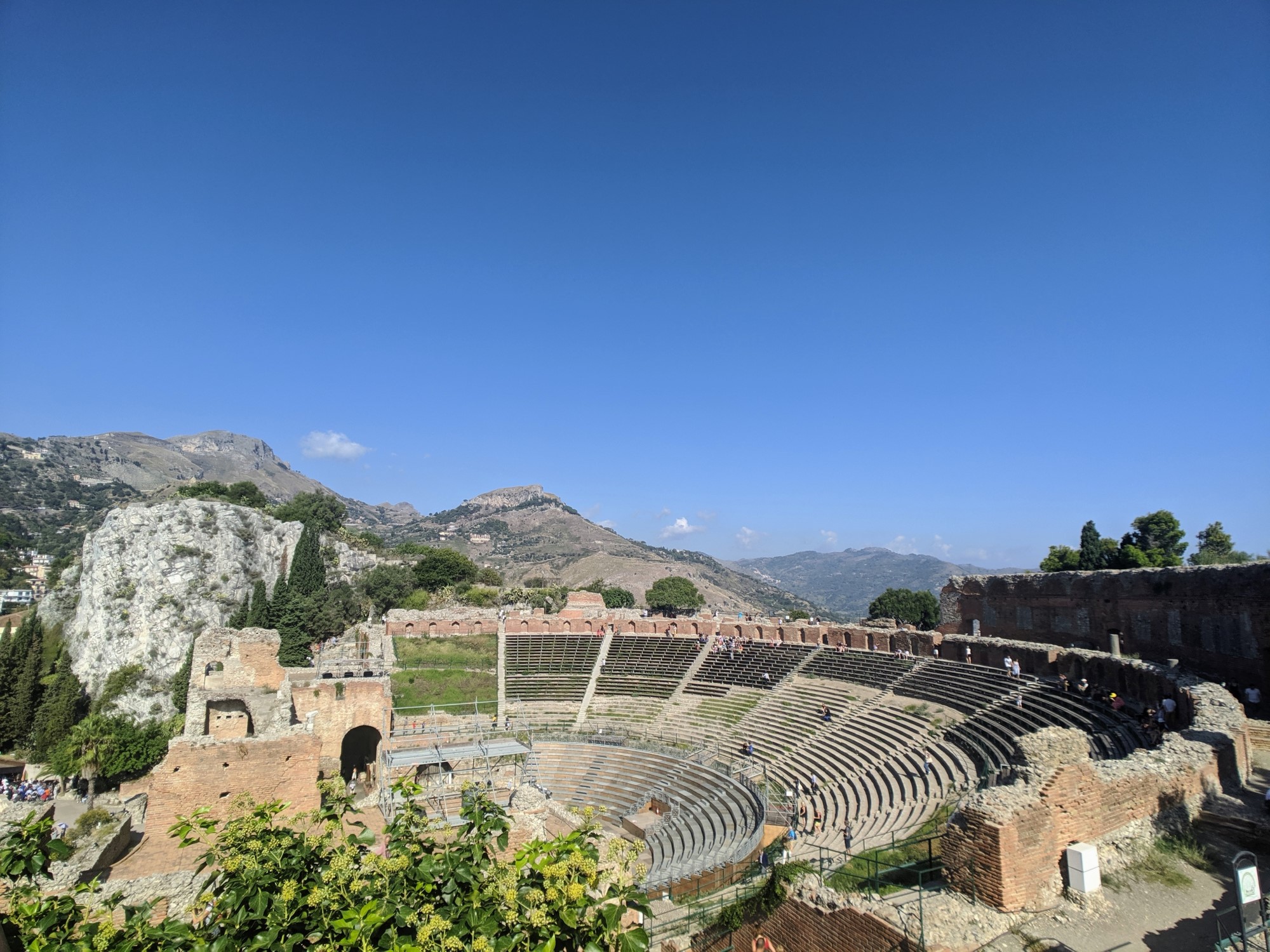 After three days, we were ready to explore somewhere new. We simply hopped onto the train and traveled about two hours south, to Siracusa. 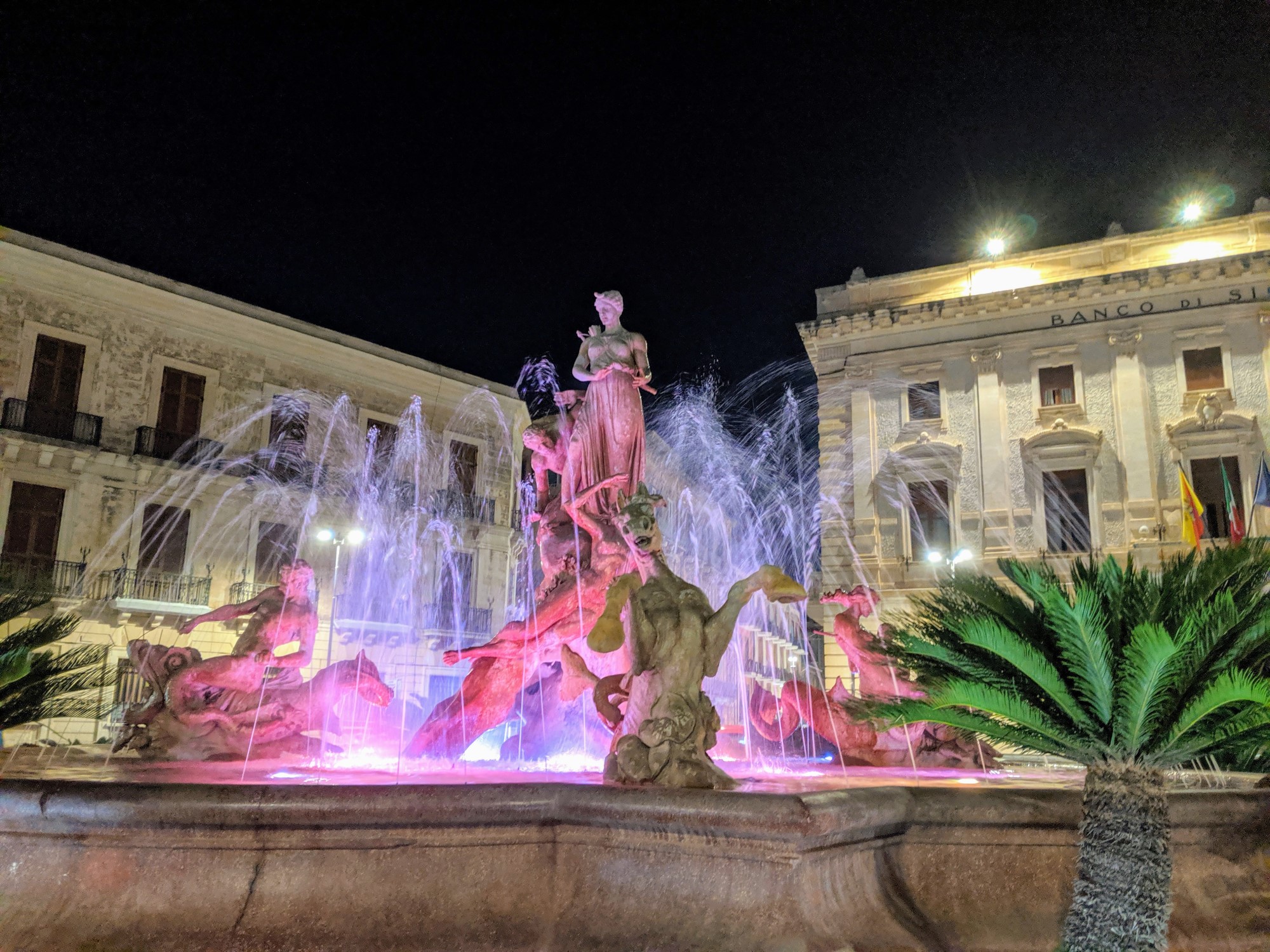 We found a nice place on the island of Ortigia, where most of the attractions of the area seemed to be. Ortigia is made up of narrow streets with old buildings in various levels of renovation and disrepair. There are highly detailed, decorative balconies on almost every building which beg for your attention. 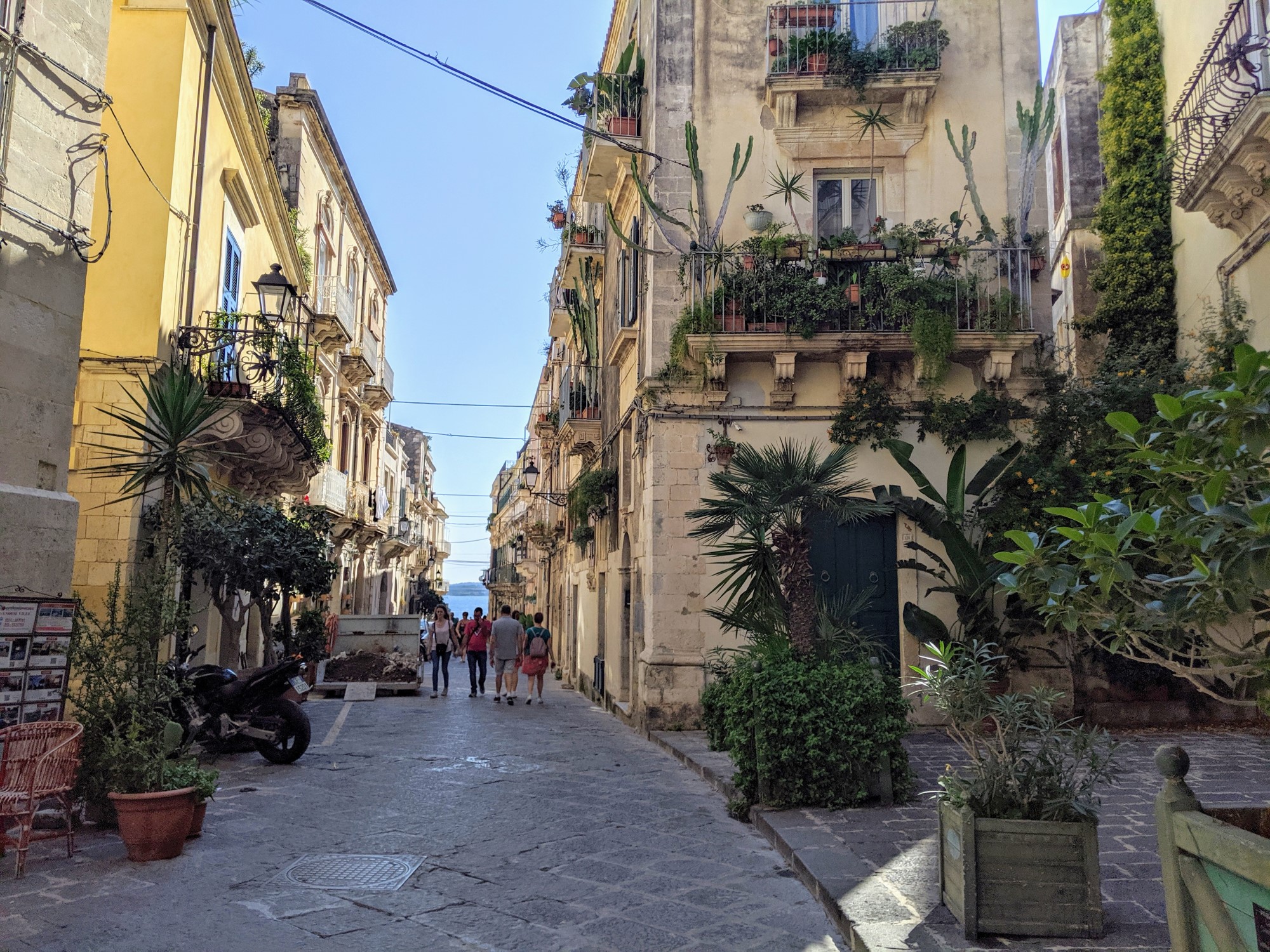 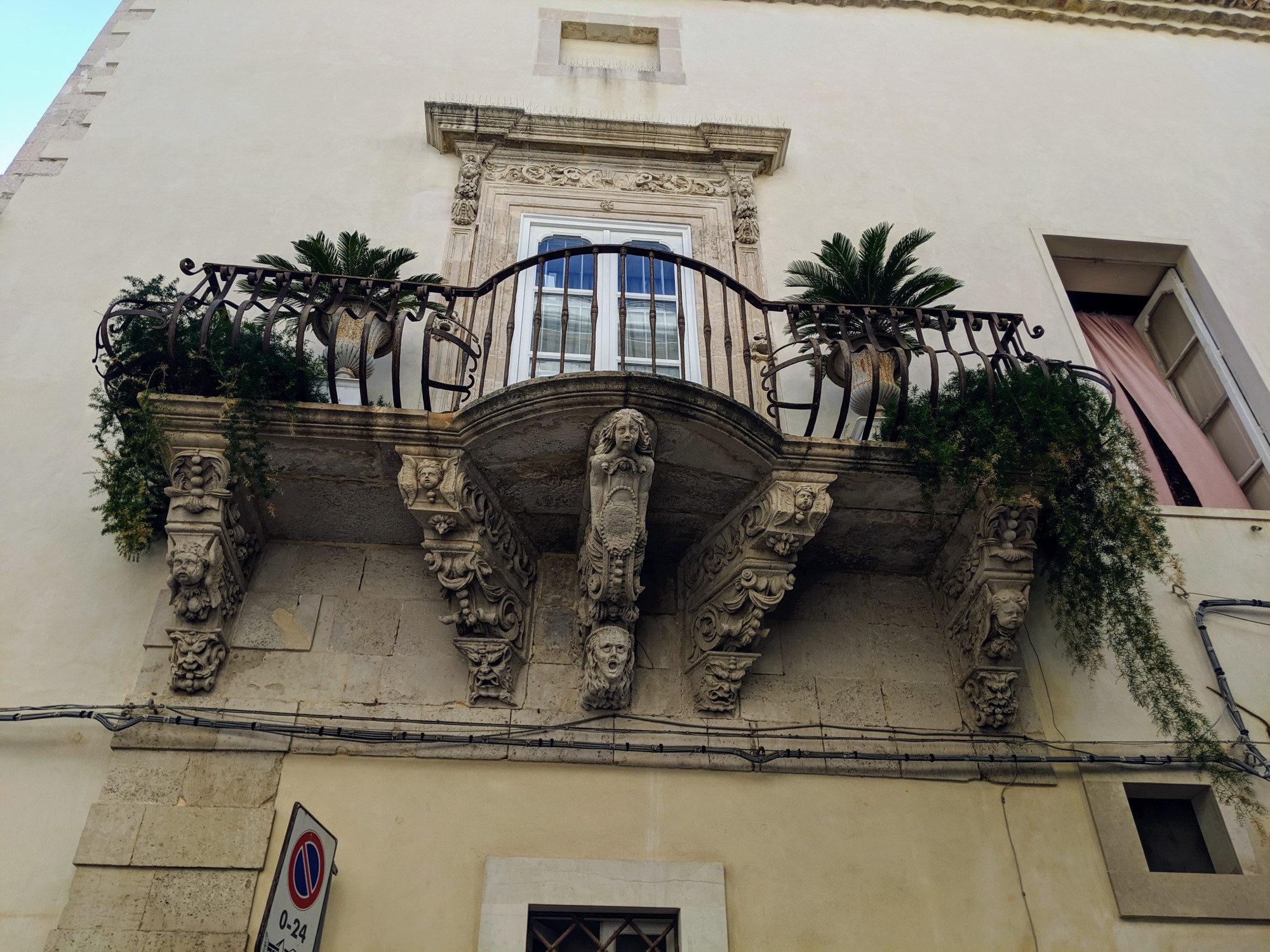 It's easy to feel almost as if you've stepped back in time, especially when you stumble upon the [Temple of Apollo](https://en.wikipedia.org/wiki/Temple_of_Apollo_(Syracuse)), which dates back to the 6th century BCE. 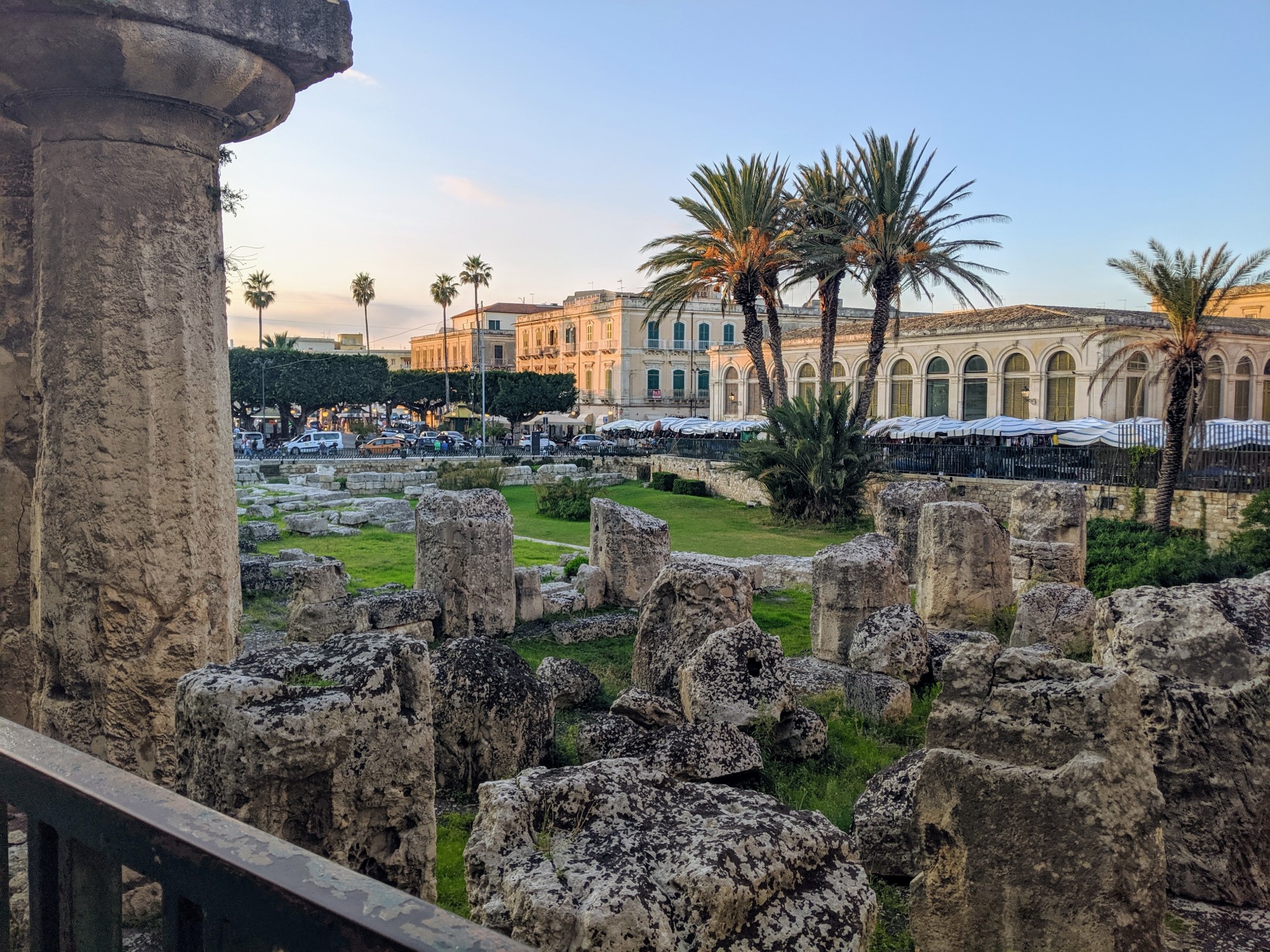 There was a mikvah discovered here recently, a remanent from Siracusa's 15th century Jewish community. No pictures were allowed, so I've linked you [here](http://www.bestofsicily.com/mag/art421.htm) to an article with pictures and history.

We also tried the Siracusa Hop-On-Hop-Off Bus Tour. The audio guide was basically nonfunctional (why does this seem to be the case in every city?) but it was cheap enough (5 Euro) to get driven around for an hour. Renting a car was highly recommended for Sicily, but we’d had a hard enough time dealing with a car in Scotland and only opted to stick to trains in Italy.

On one hand, the trains are somewhat limiting in terms of where you can go. On the other hand, drivers in southern Italy are notoriously insane and traffic laws appear to be nothing more than vaguely suggested. We witnessed this on the Hop-On-Hop-Off bus; another Sicilian driver got fed up with our bus driver and they stopped their vehicles and shared (shouted?) some words. The other driver sped off, but some older men sitting outside at a cafe also started sharing words with our bus driver, who continued yelling animatedly. It felt like a very Italian experience 😋

Too soon it was time to move on from Sicily and start heading back north. I just wish I could have taken all the granita with me…

While I don’t necessarily feel like I need to get back to Taormina or Siracusa, they were just a taste of what Sicily has to offer. I would describe it as the taste of granita 😛, and I need to go back for more.

Sicily is definitely high on our return trip list. I think it would be super easy to spend a month or two exploring with a car.

Conclusion: [Take Us Back] (https://hotsauceandcoffee.com/tags/take-us-back-dwntgb/)