We took our second (and mercifully last) night train from Siracusa to Salerno- ending up with not much more sleep than our first time, but thankfully there was running water and electricity this time around.

Once in Salerno, we boarded the ferry to Amalfi. We spent the better part of the day exploring the town of Amalfi, with a brief visit to Atrani- a much smaller and more relaxed version of Amalfi.

Amalfi itself, while beautiful, was incredibly touristy. It felt like everything there was quite overpriced, and the sheer amount of tourists crowding the streets got tiresome after awhile. Thankfully we had a bit of a respite in Atrani, and enjoyed some fantastic views taking the path connecting the two towns over the cliffs. 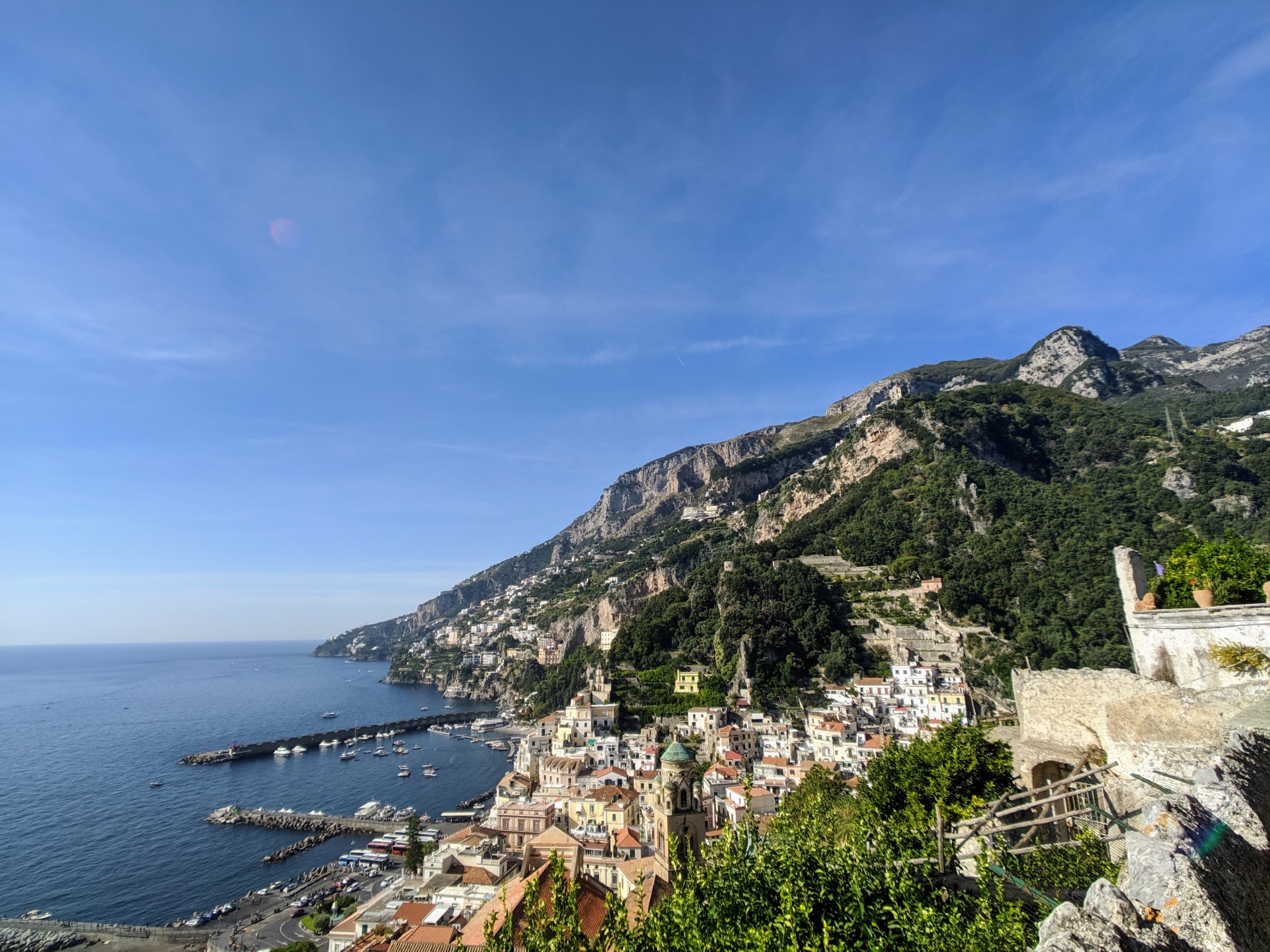 Towards the end of the day, our amazing Airbnb host offered to drive us to the apartment up the hill in Agerola. This was a far superior sounding plan than taking the bus on these windy roads! 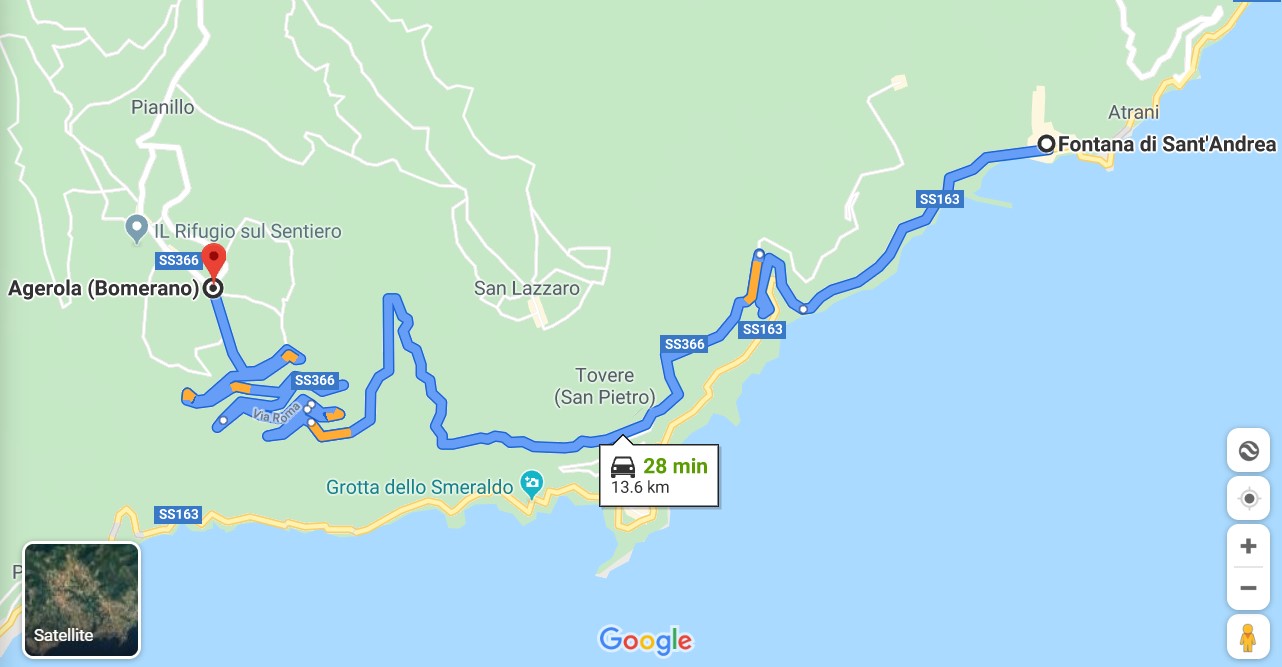 The towns that make up the Amalfi coast are mostly built up on cliff sides, which means to get from one town to another via car/bus you end up having to take hundreds of hairpin turns. Alternatively, you could walk, but you end up needing to take a million and one stairs. This part of Italy is truly magical in its beauty but is pure sufferring for those who are prone to car-sickness or aren't particularly athletic. 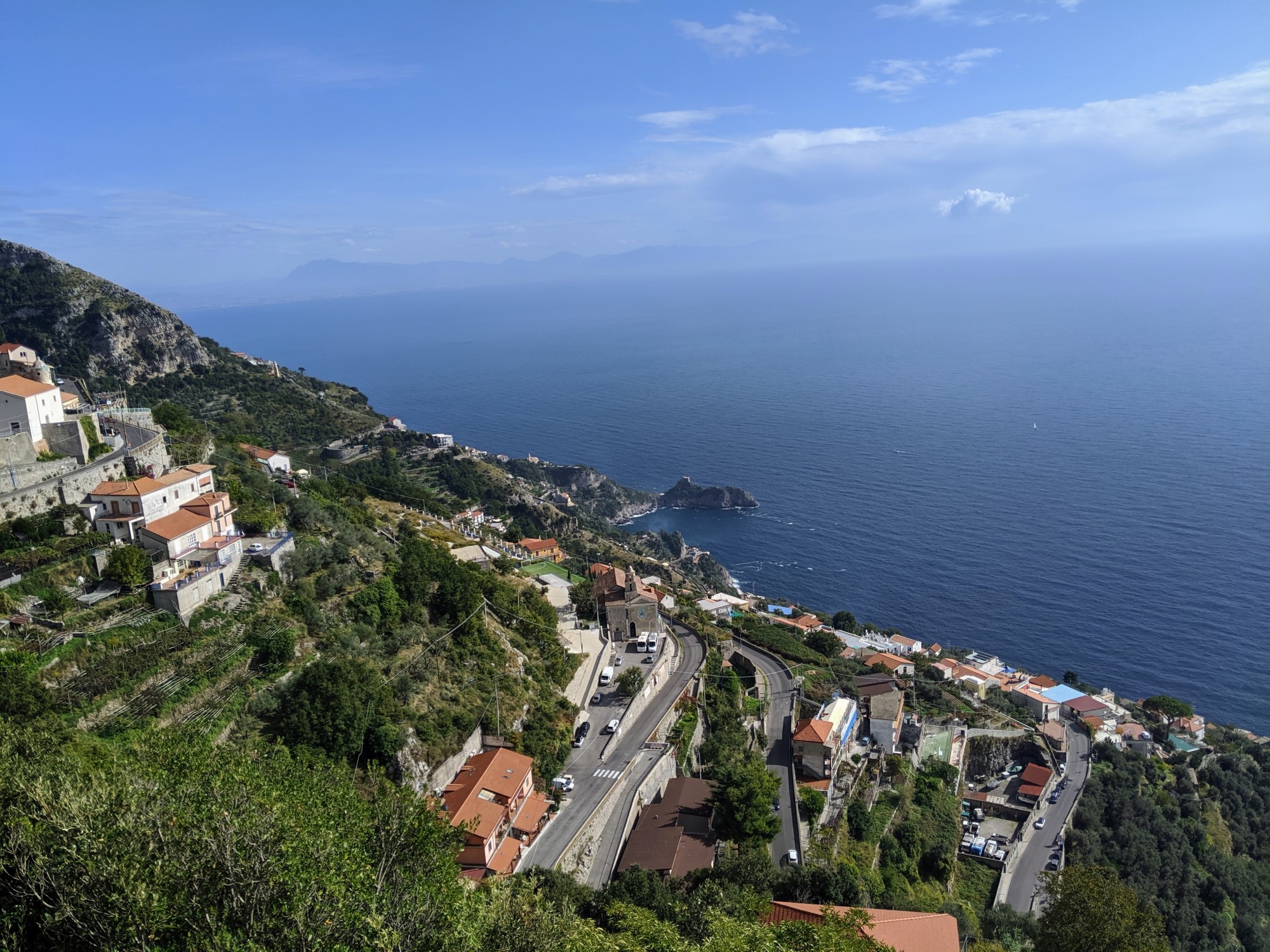 We opted to stay in Agerola for the first few days in order to be close to the start of the Sentiero Degli Dei, or Path of the Gods. 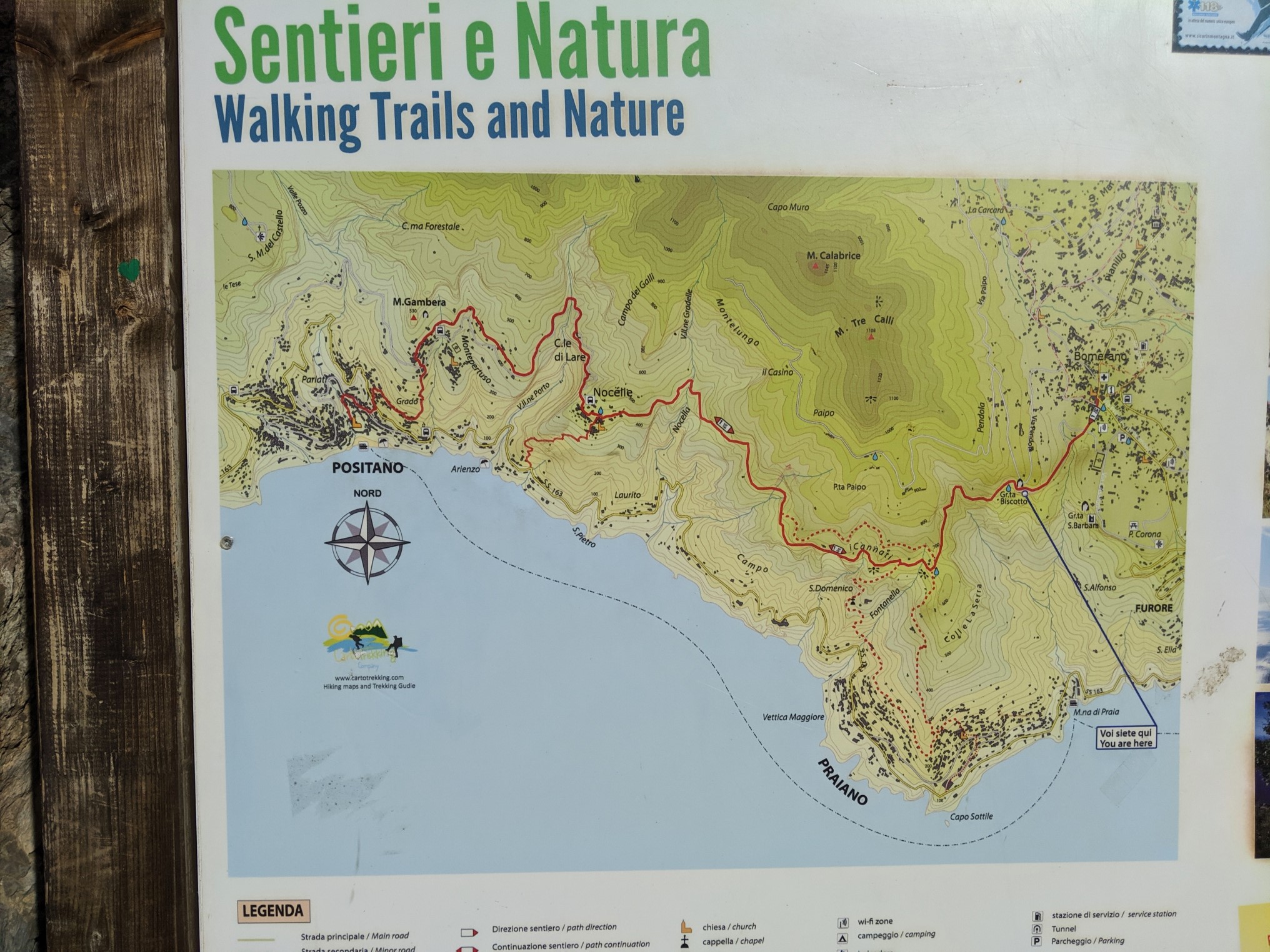 This is quite a popular hiking trail and it was easy to see why- almost the entire way has beautiful views of cliffsides, ocean, and blue sky. 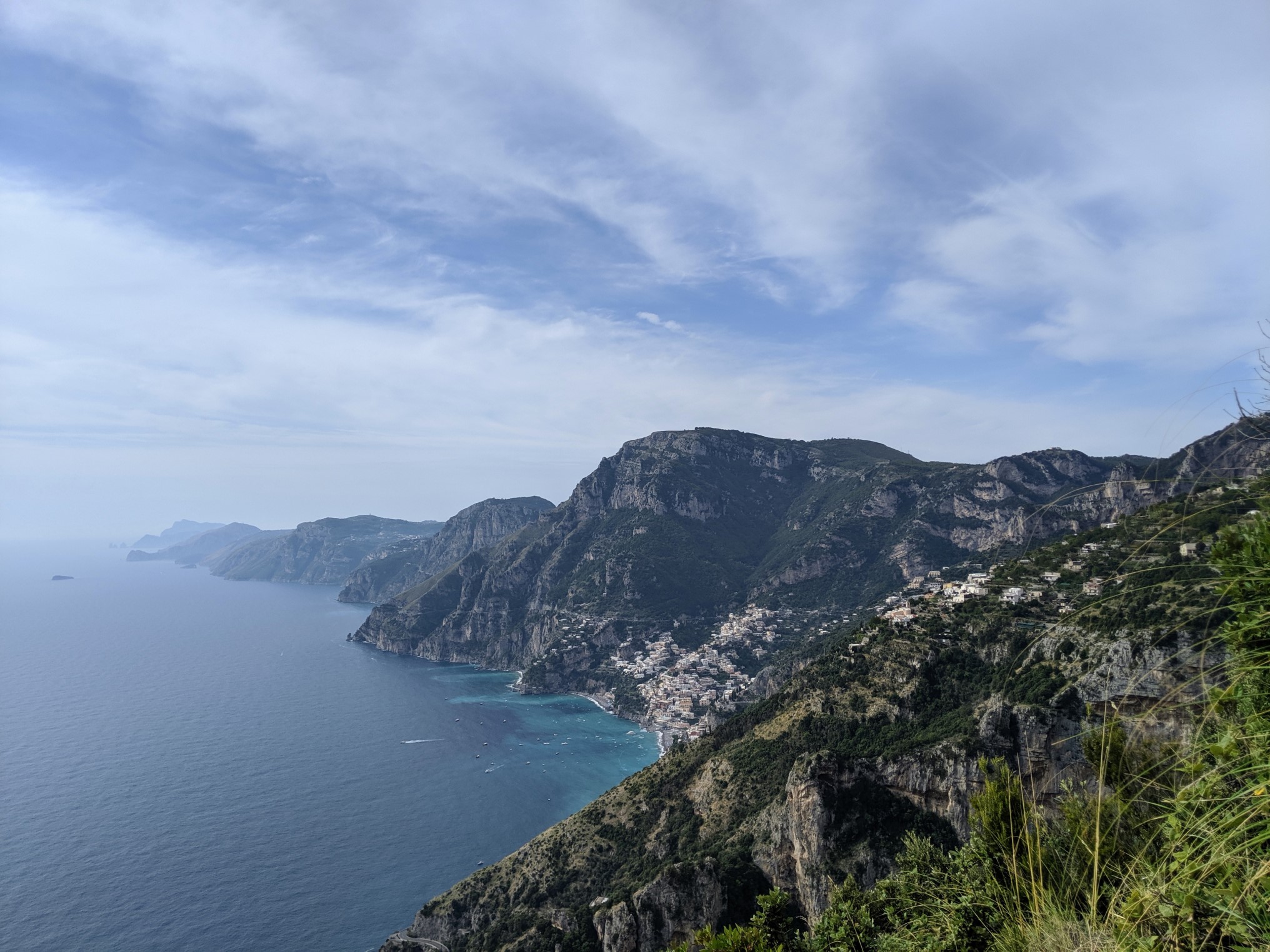 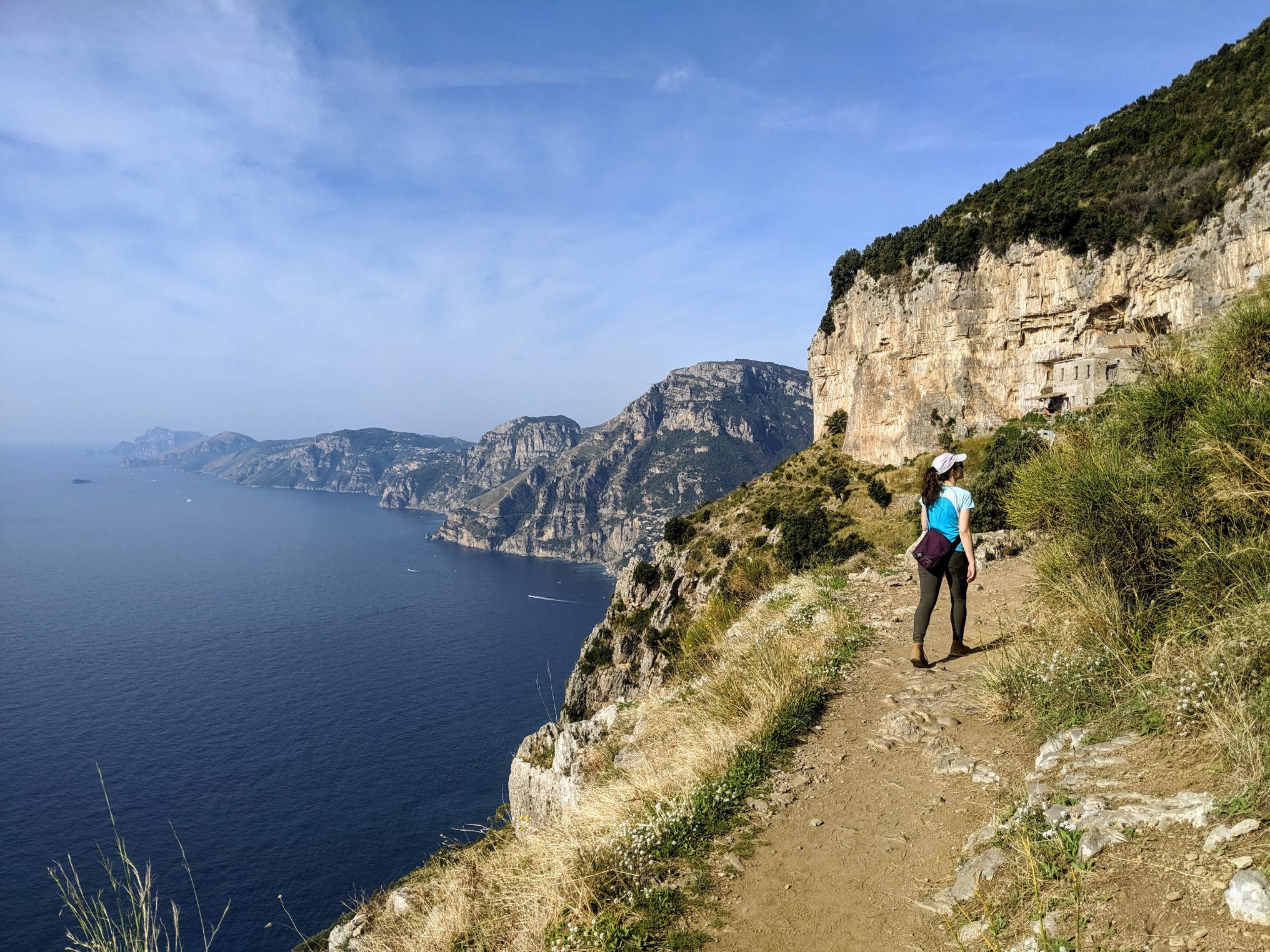 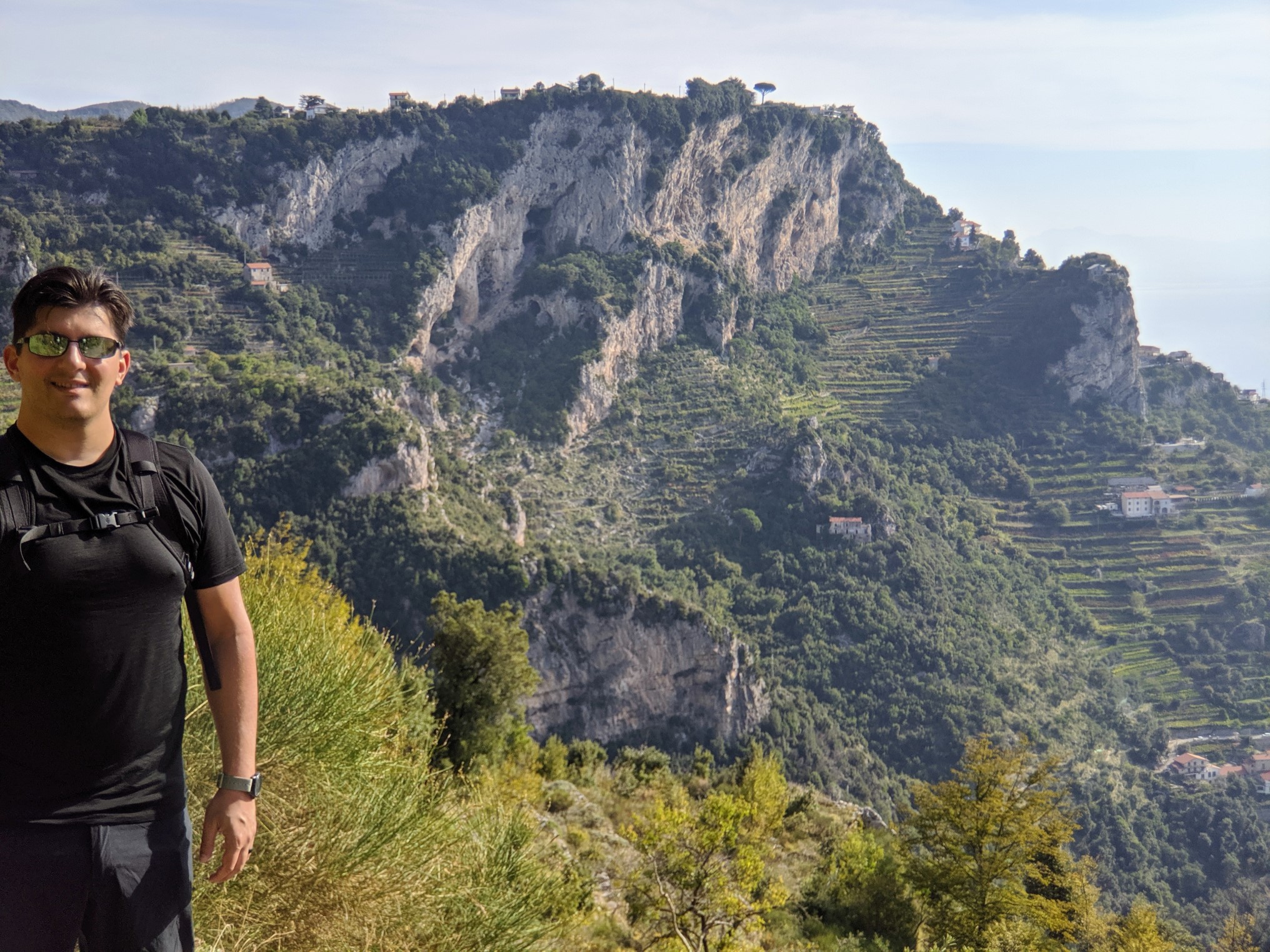 We bought caprese sandwiches from a market in the town center before leaving, as the soft cheese (fior di latte) here is famous. It gets made each night and is ready to eat in the morning. The market assembled the simple sandwiches for us- fresh bread, sliced tomato, fior di latte, and an olive oil drizzle.. very simple but incredibly delicious!! These were consumed overlooking Positano. 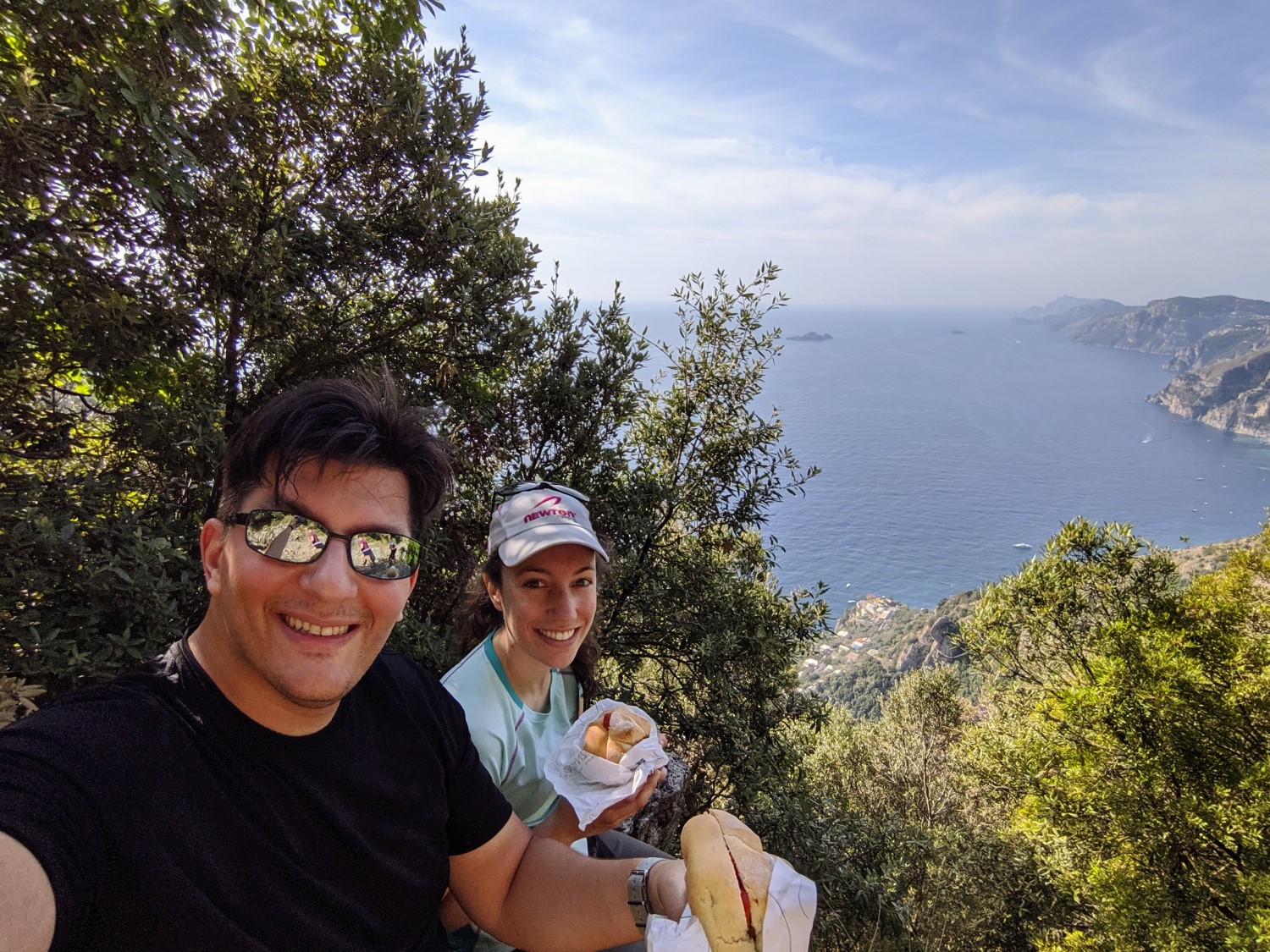 Along the way, there are many lemon groves terraced into the land- after passing through so many lemons, we of course opted to enjoy some lemon granita once we reached the end 😊. It was a nice, cold treat, well deserved at the end of the trail. (Note- the granitas found in Amalfi are basically just lemon slushies, and are therefore quite different from Sicilian granitas). 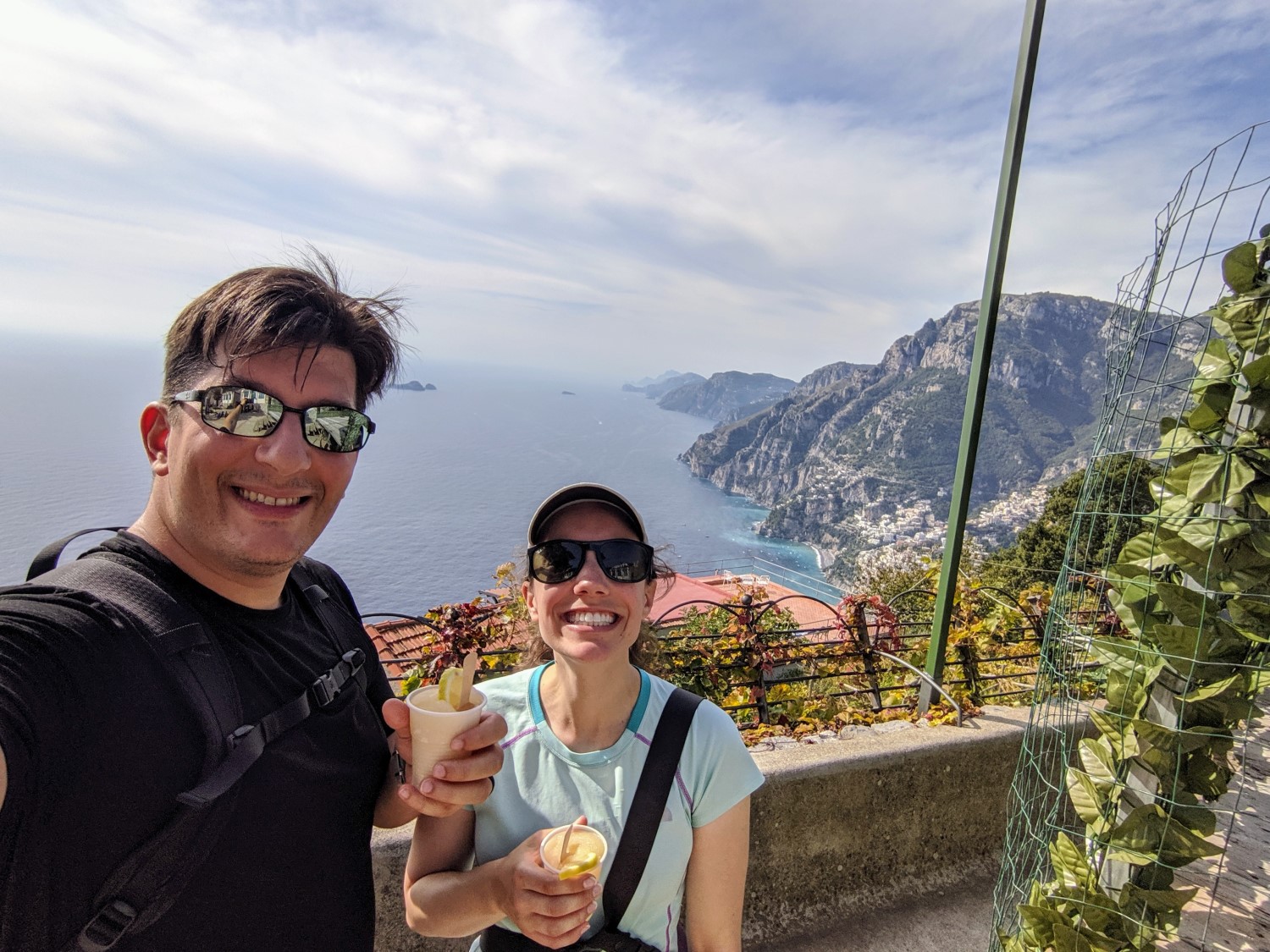 The trail is a point-to-point which takes you from Agerola to Nocelle. It took us about two hours one way. Once in Nocelle, you can take a shuttle or hike down to Positano. Ultimately though, we opted just to turn around and hike right back after enjoying our granita. We had started around 10:00 AM and it was relatively busy with other hikers, though it ended up being less busy on the hike back to Agerola.

The next day, we opted to check out another hiking trail, Sentiero Pennina, that originated at the same starting point as the Path of the Gods. 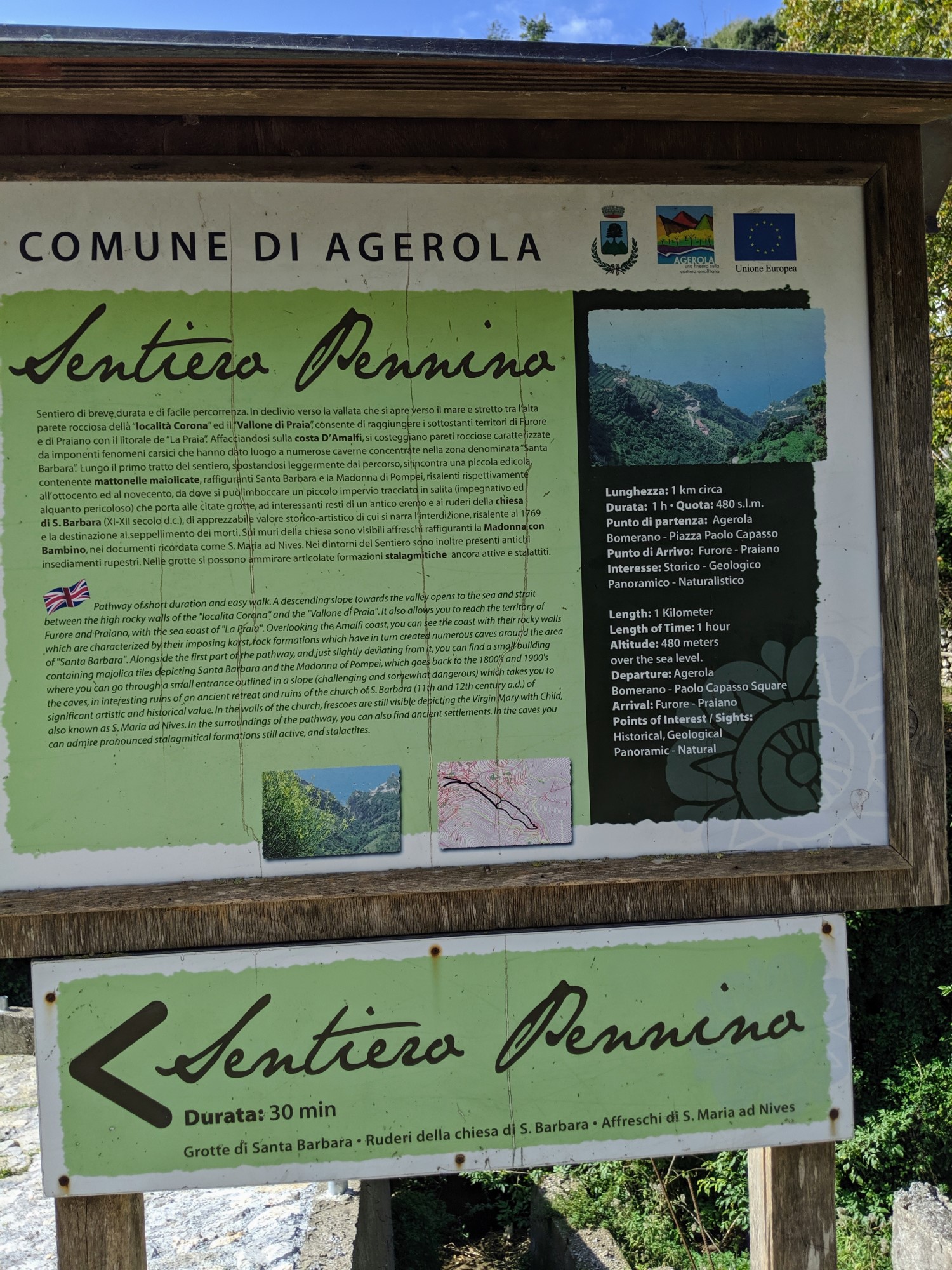 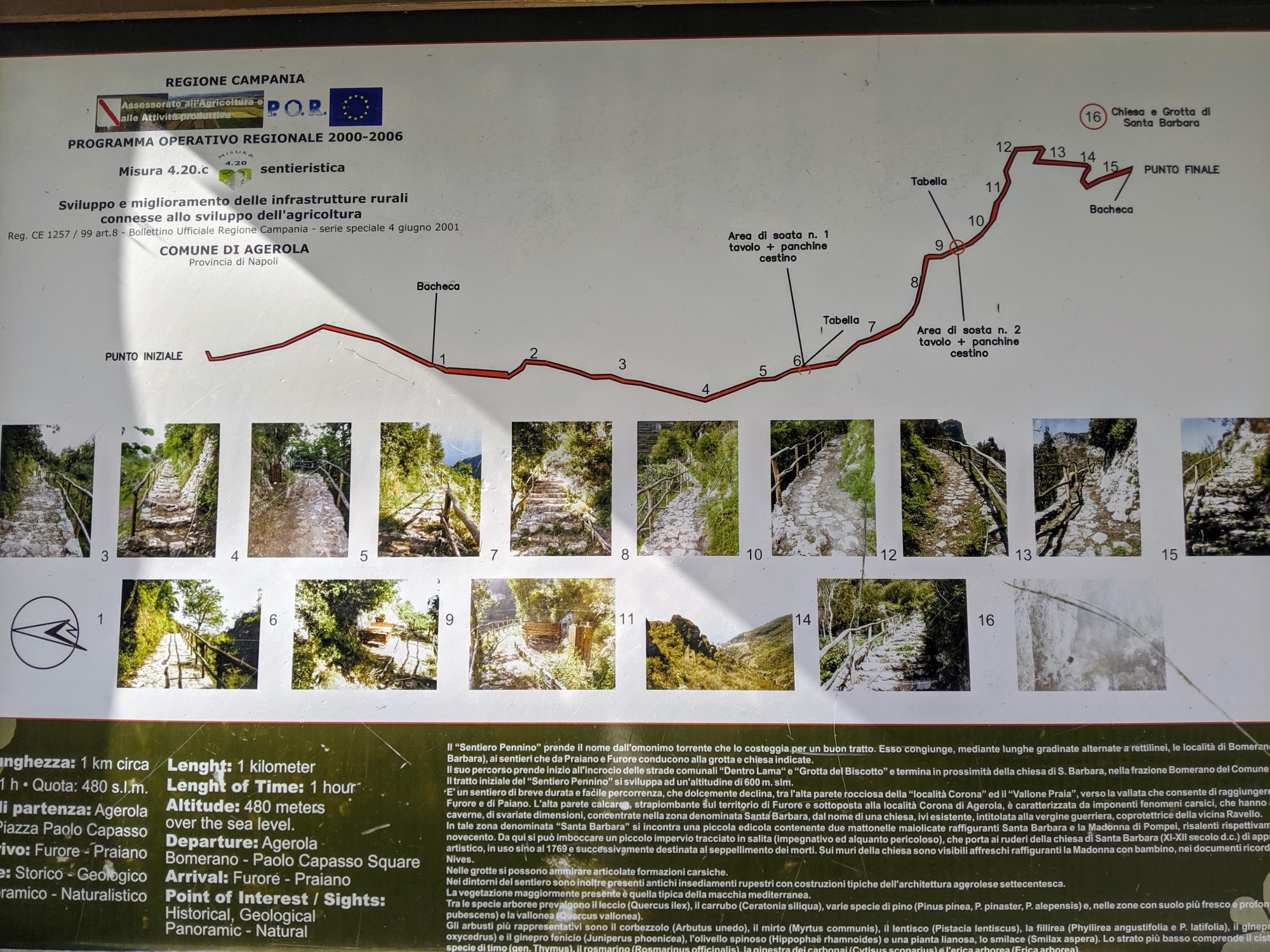 We were the only ones around on this one except for one loose goat that wasn’t too keen on us interrupting his snack. This path was pretty overgrown and marked only by “HOKA ONE ONE” ribbons that were few and far between. 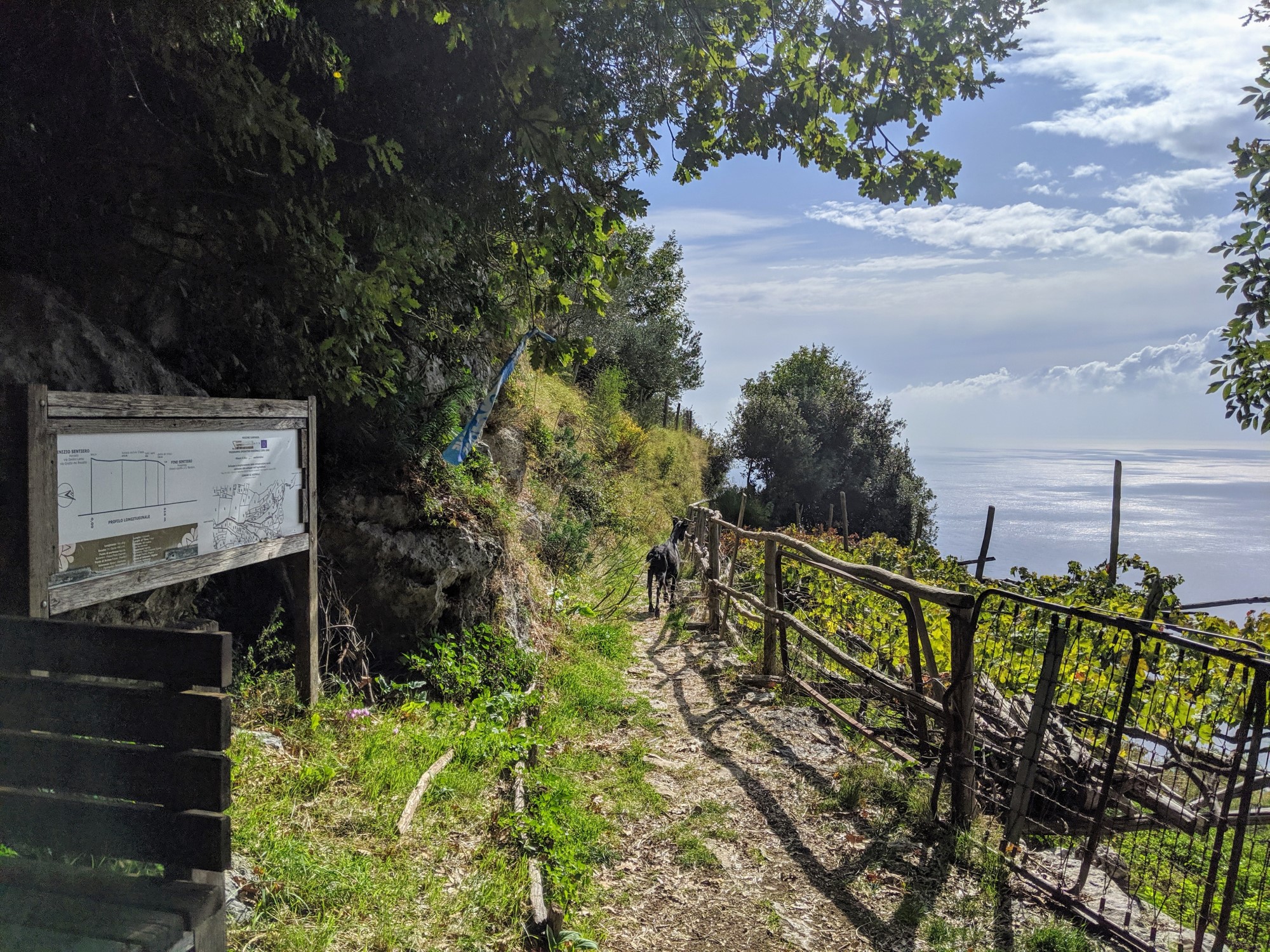 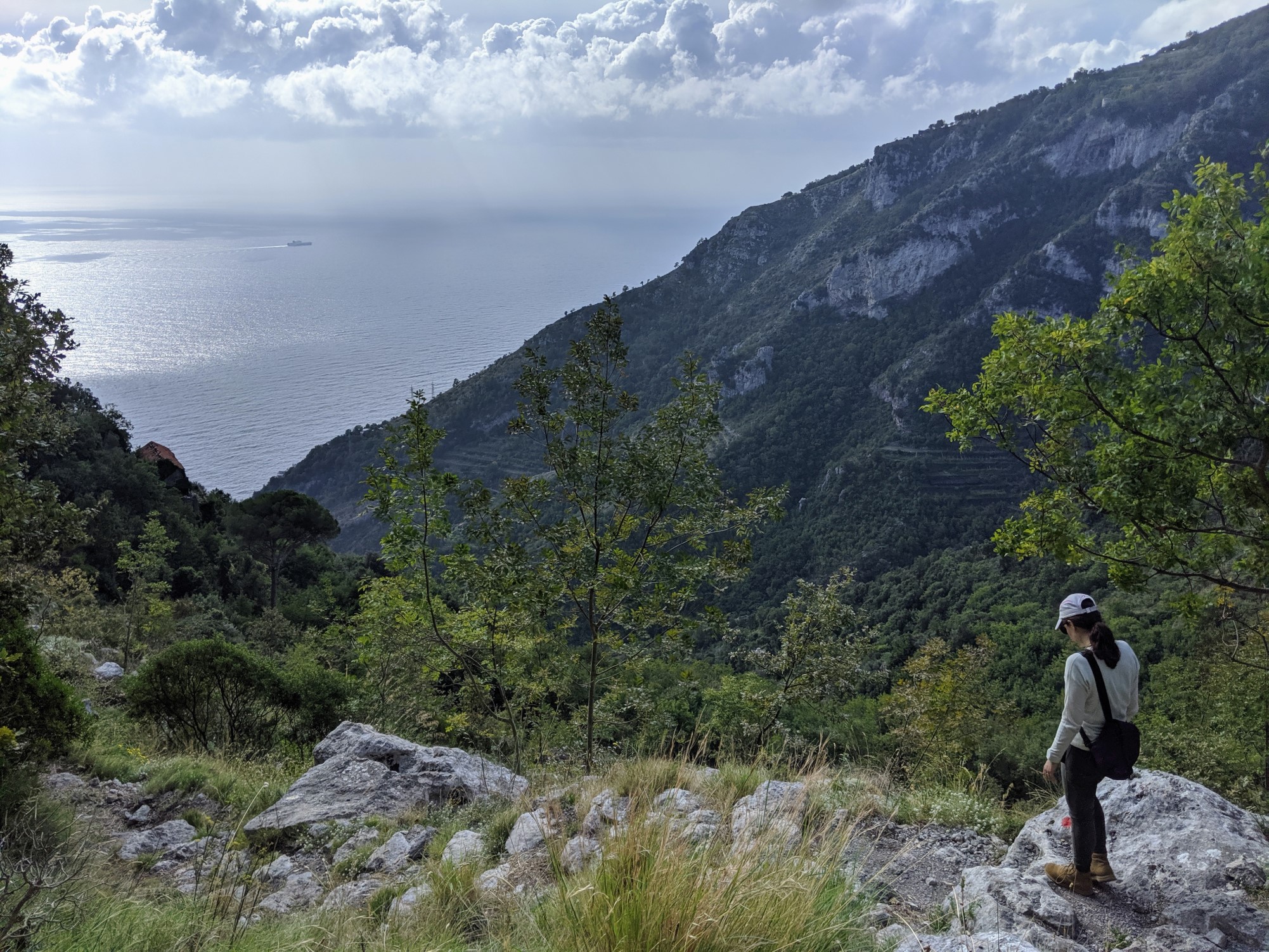 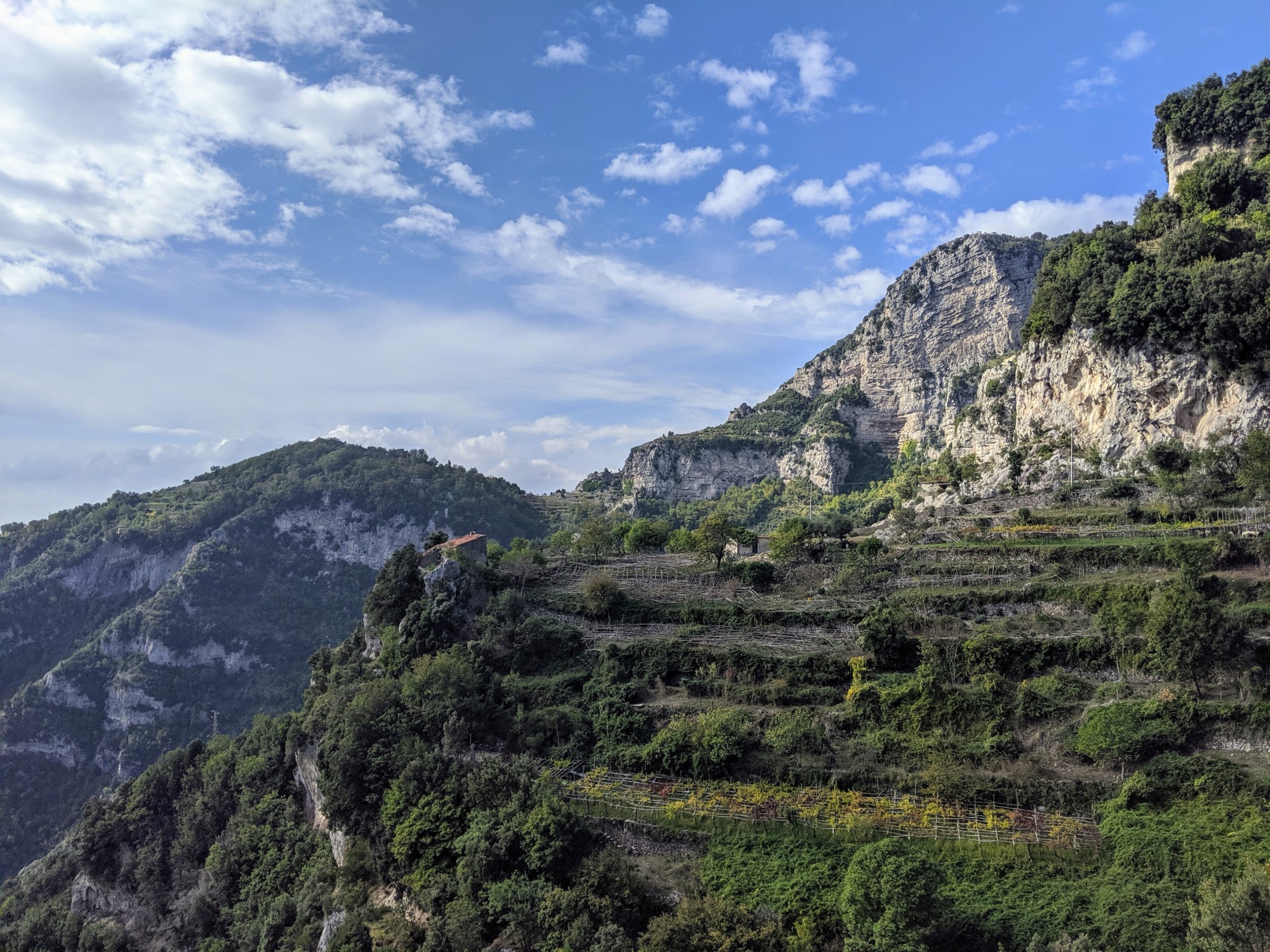 The views were beautiful and it was wonderful not to have to share it with anyone. This trail dropped us off down the hill so we chose to take the road/stairs back. It got a little hairy in places, as the road is narrow (with no shoulder) and people seem all too comfortable to take the hairpin turns at high speed. Even when we had the relative safety of taking the stairs, many sets of stairs were completely overgrown with vegetation. Also, the walk back up was quite exhausting, as it was just steep uphill all the way home. 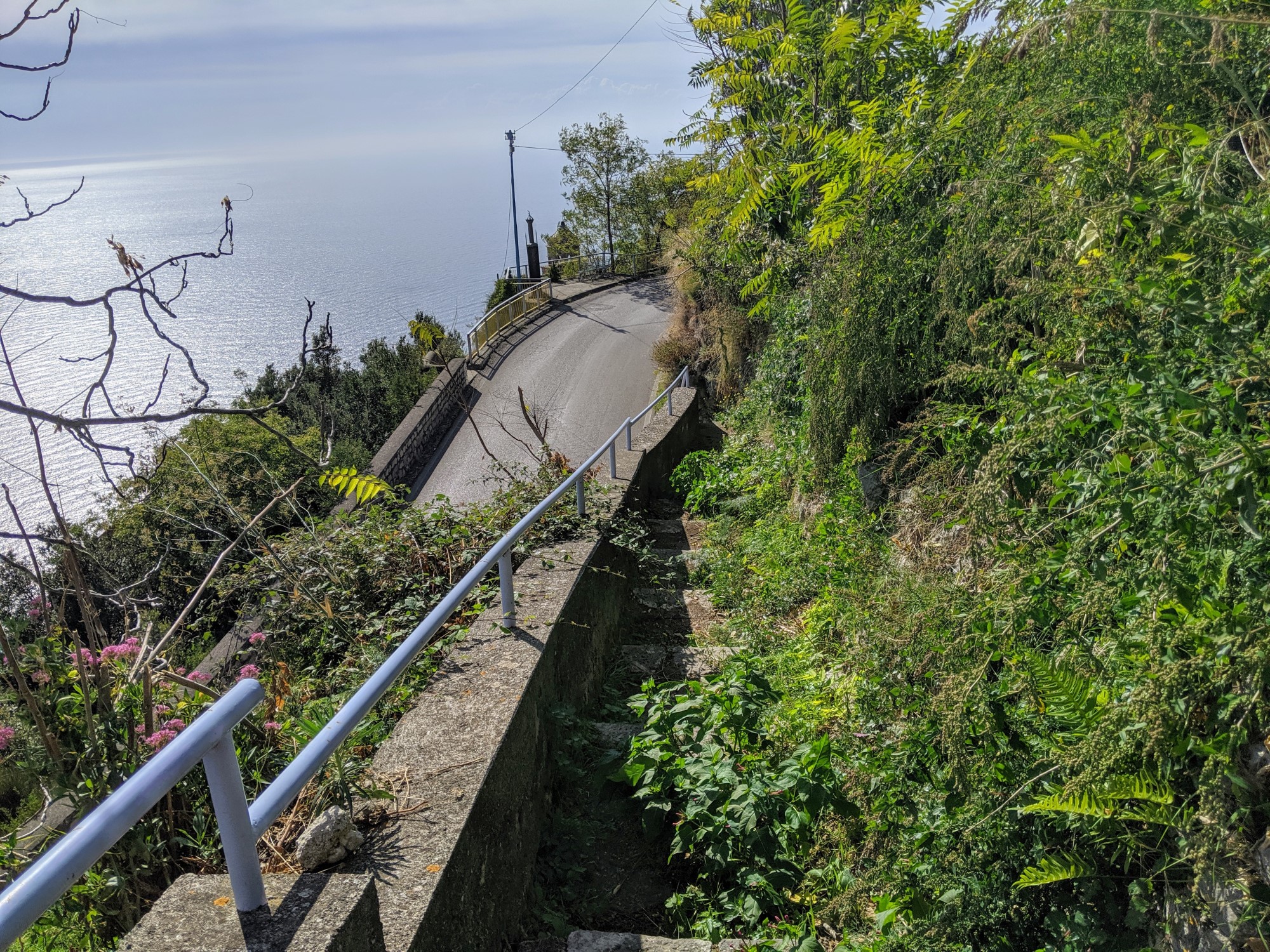 We would have stopped for some well deserved gelato on our way back to the apartment, but we were running late for our next activity…

That same afternoon, we took a cooking class that was definitely a highlight of our trip so far. We learned how to make tiramisu, ravioli, and fettuccine and got to consume it all at the end. We were joined by couples from Israel, Canada, and the Boston-area, and luckily our group really vibed well. I think the class was supposed to only last three hours but before we knew it, five hours had passed by. It was so much fun hanging out with other couples, making fresh and delicious food, and drinking the bottomless beer, wine, and homemade limoncello. 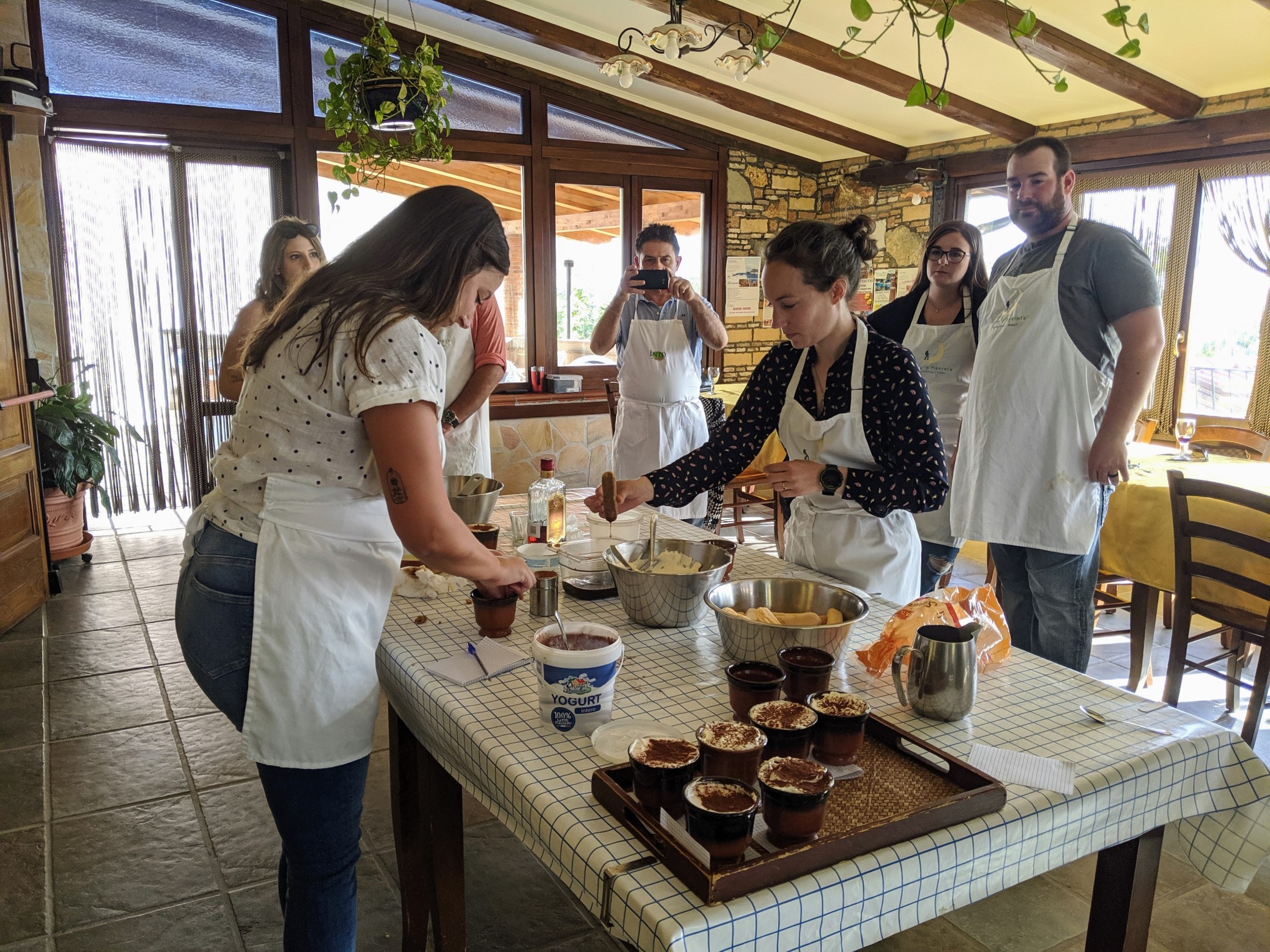 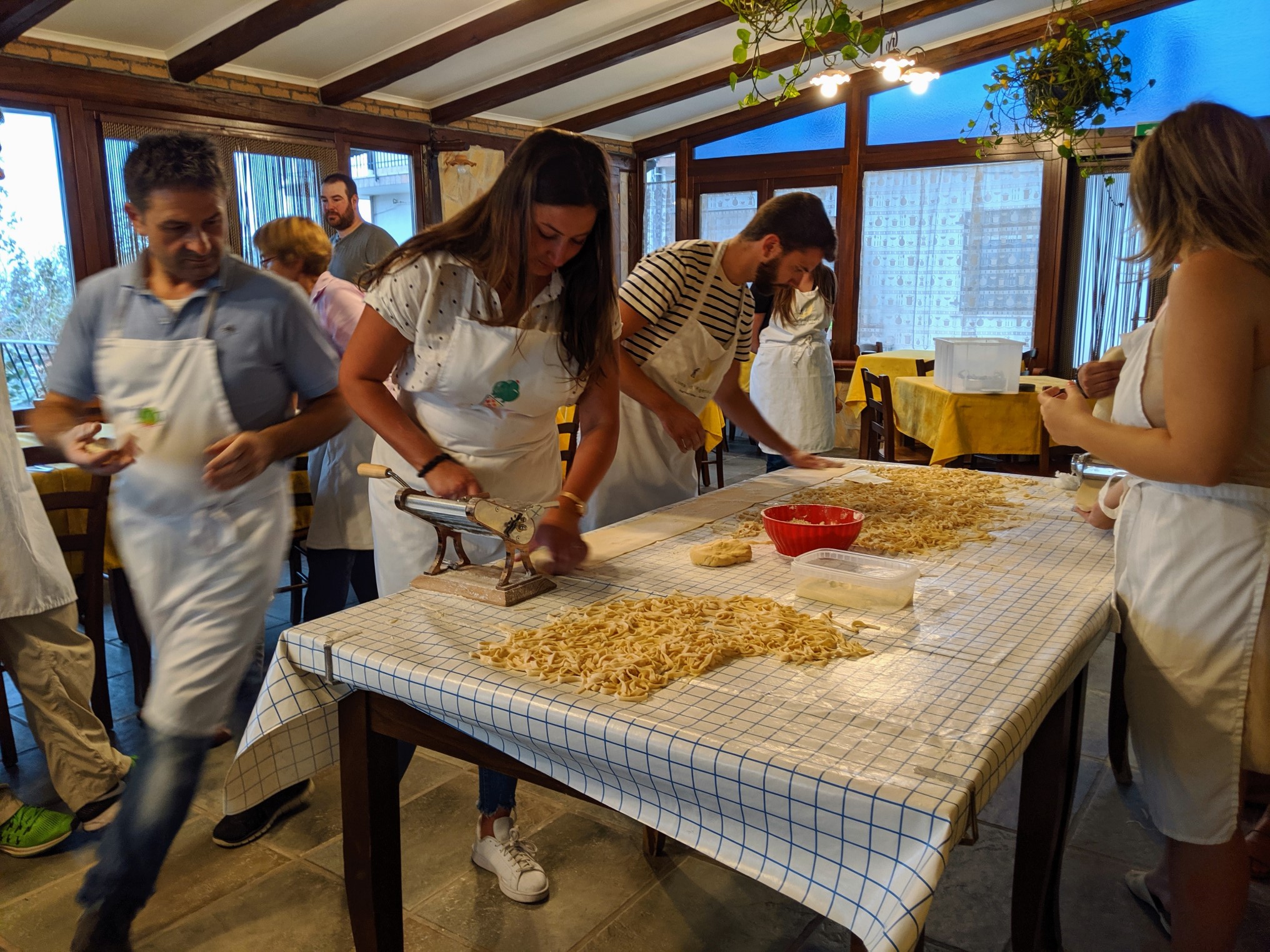 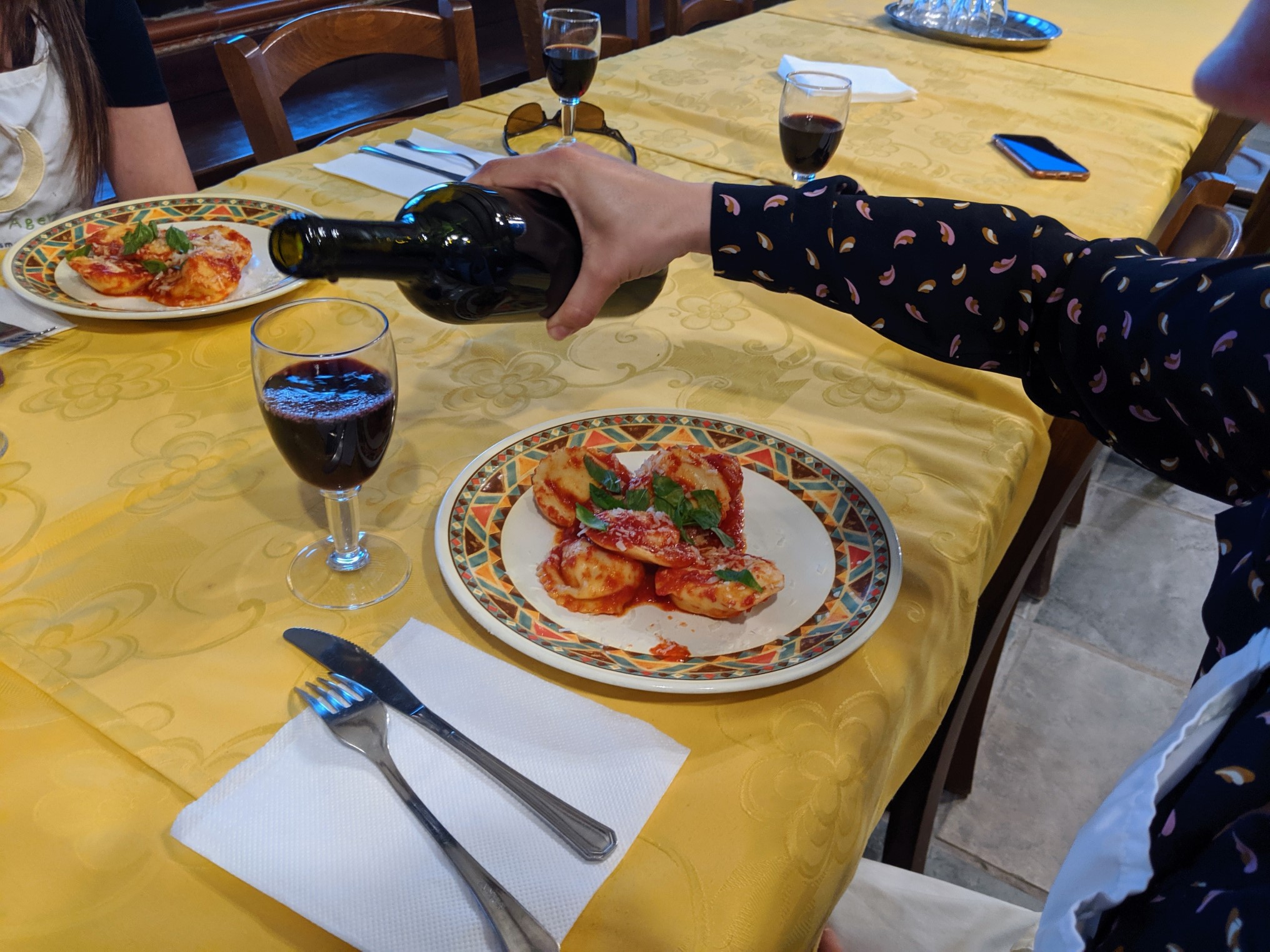 The second half of our Amalfi Coast stay was in the small beachside town of Maiori. The towns of Amalfi and Positano are the most well known in the area. We got to explore Amalfi on our first day in the area, and Positano we admired from a distance when we hiked to Nocelle. Amalfi was uncomfortably touristy (and expensive) as mentioned earlier, and we figured Positano would be the same. Also, our only real opportunity to explore Positano was after we finished hiking the Path of the Gods and we didn’t want to take the 1,000 steps to the bottom of the hill or figure out the shuttle schedule, and end up having to take a miserable bus back to Agerola. (Have you been before? Did we make a mistake in not going??)

I digress… Maiori was super chill and quiet and we felt like the only English speakers around. Our Airbnb had an ocean view and I particuarly enjoyed sitting on the balcony to enjoy the sunset (Ryan finds things like this boring after a couple of minutes…🤣). 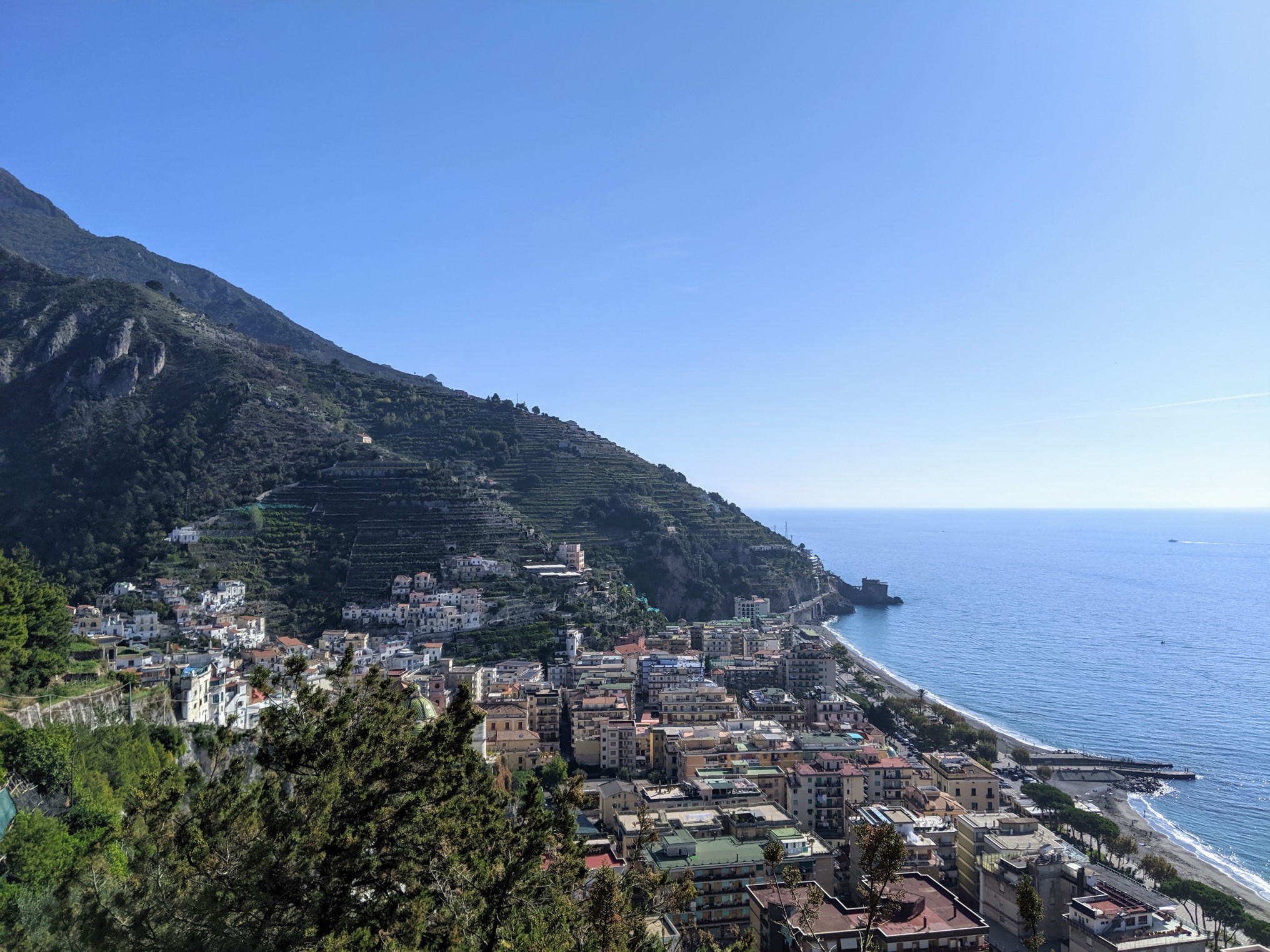 We decided the next day to get some exercise by taking the Path of the Lemons from Maiori to neighboring Minori, and then by hiking all the way to Ravello! We definitely didn't think this plan through, because stairs are really tiring. We were already exhausted after the Path of the Lemons- at which point we were faced with the hike up to Ravello. It ended up being two full hours of nothing but stairs up. Our legs hated us but the views were fantastic! 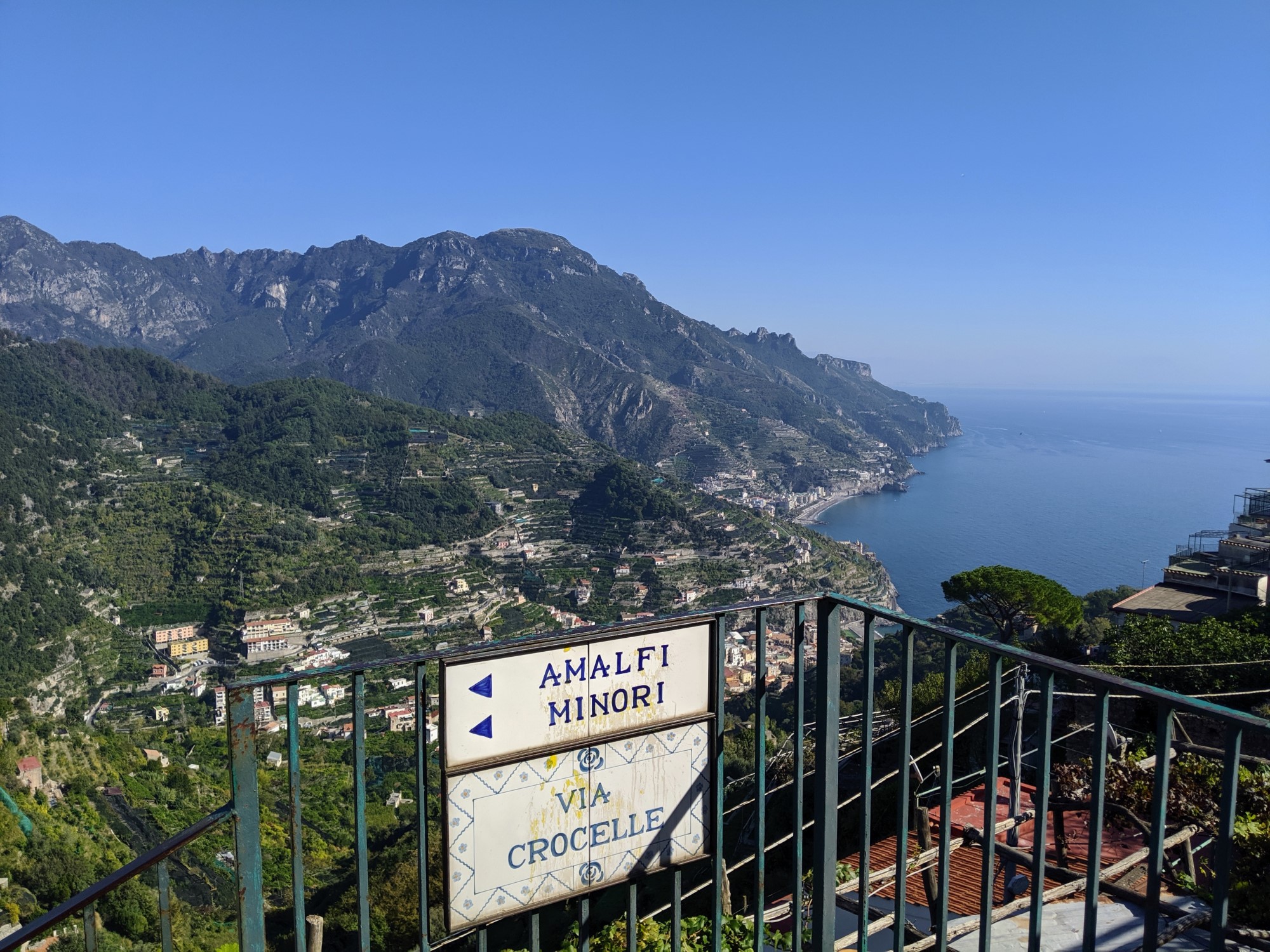 The Path of the Lemons, or Sentiero Dei Limoni, was a relatively easy, scenic, and quiet hike between Maiori and Minori. The second part, the hike up to Ravello, was mostly shaded stairs. we didn't have any energy to explore Ravello once we arrived to the top. Did I mention we hadn't eaten breakfast? We made a beeline to a well-reviewed pizza restaurant and refueled on, what else, pizza and beer. Afterwards we dragged ourselves out of our chairs, found gelato, and briefly wandered the flatter parts of Ravello before heading back downhill. 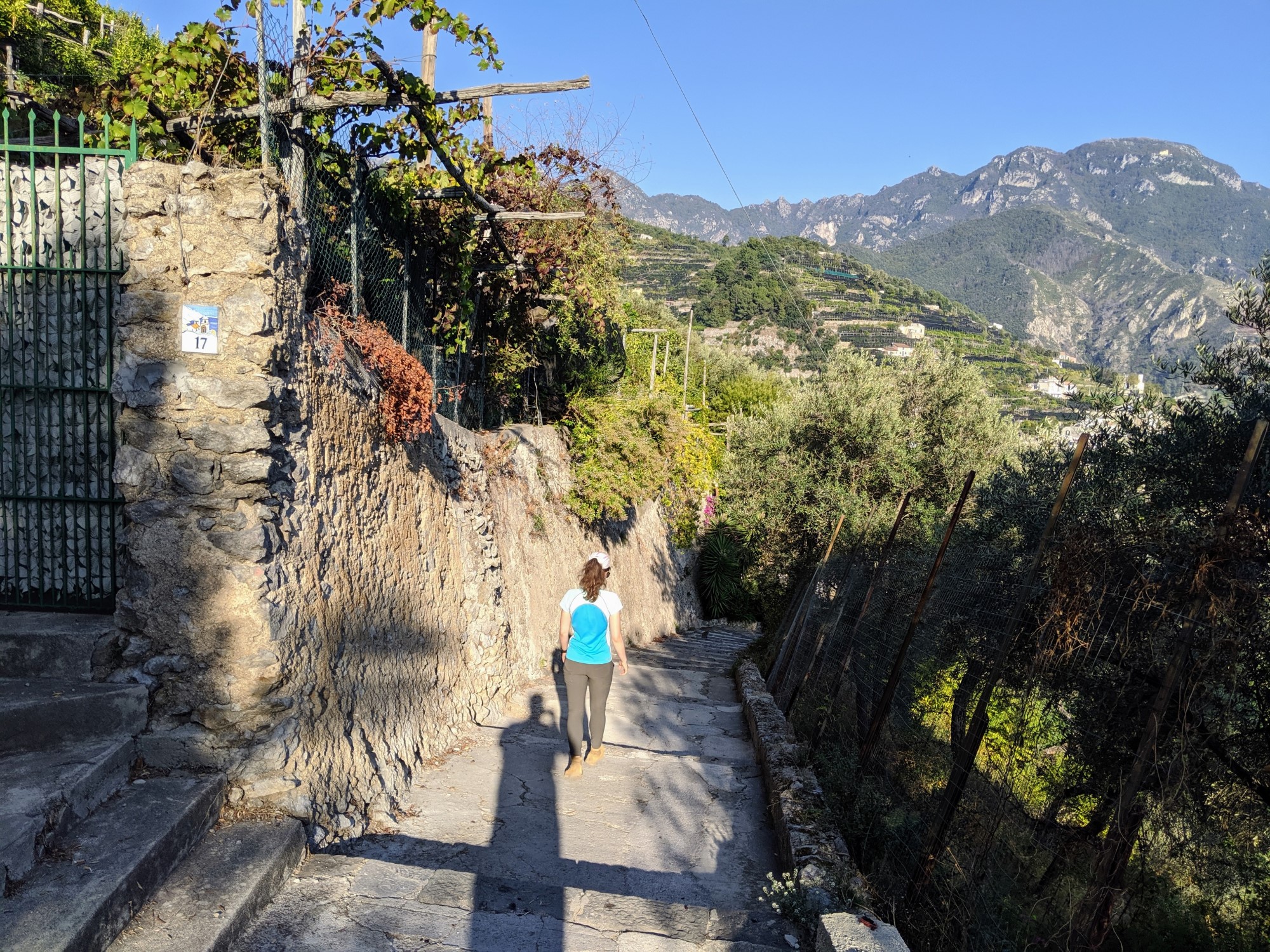 Below, Ryan illustrates where we started our hike in Maiori, from the overlook in Ravello: 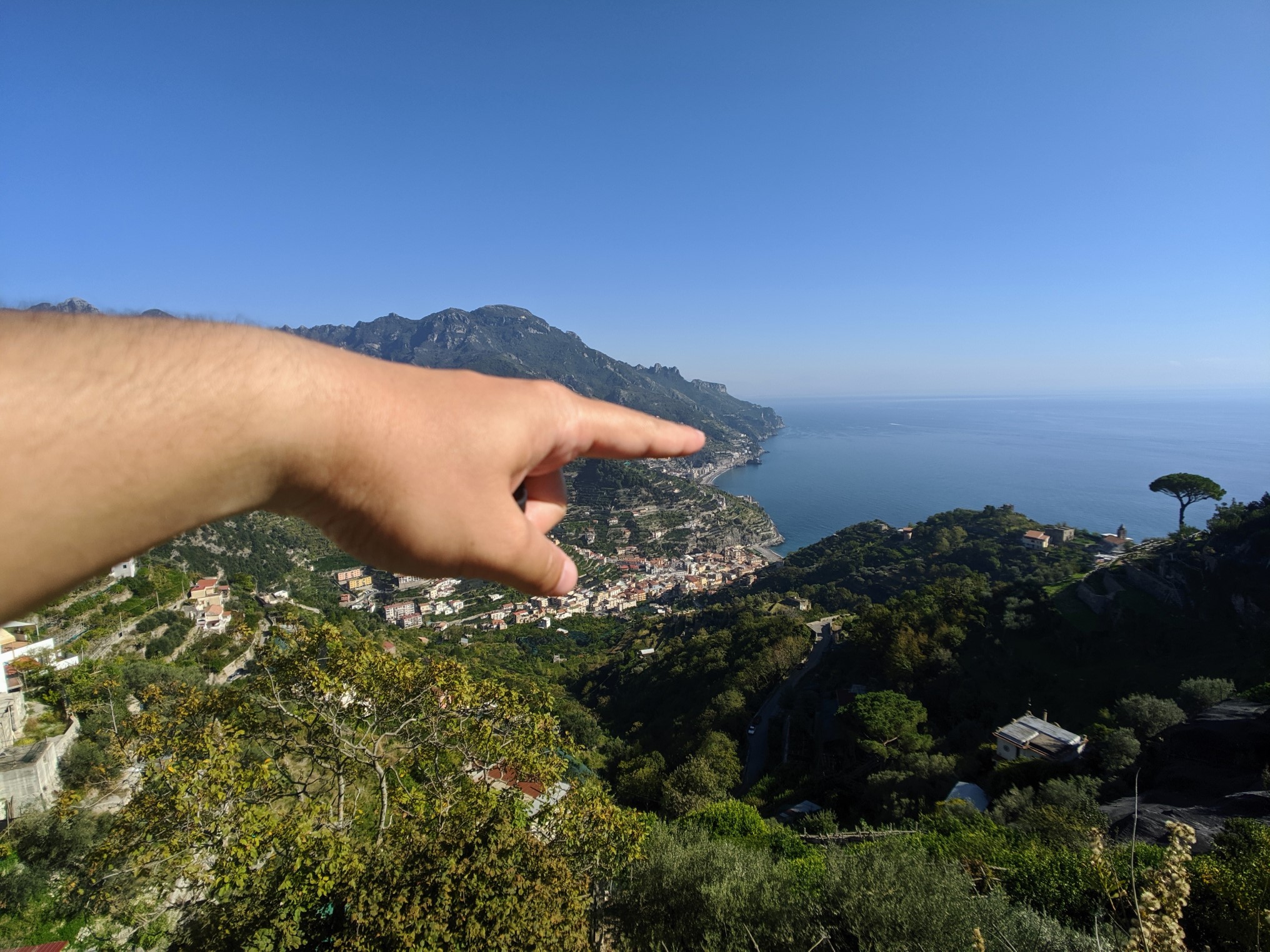 Once we made it back to Maiori with jelly for legs that afternoon, we took a well-deserved swim in the ocean. The water was still pretty warm considering it was late October! We easily could have spent an extra week here relaxing, but the next day it was time for us to continue our journey north. 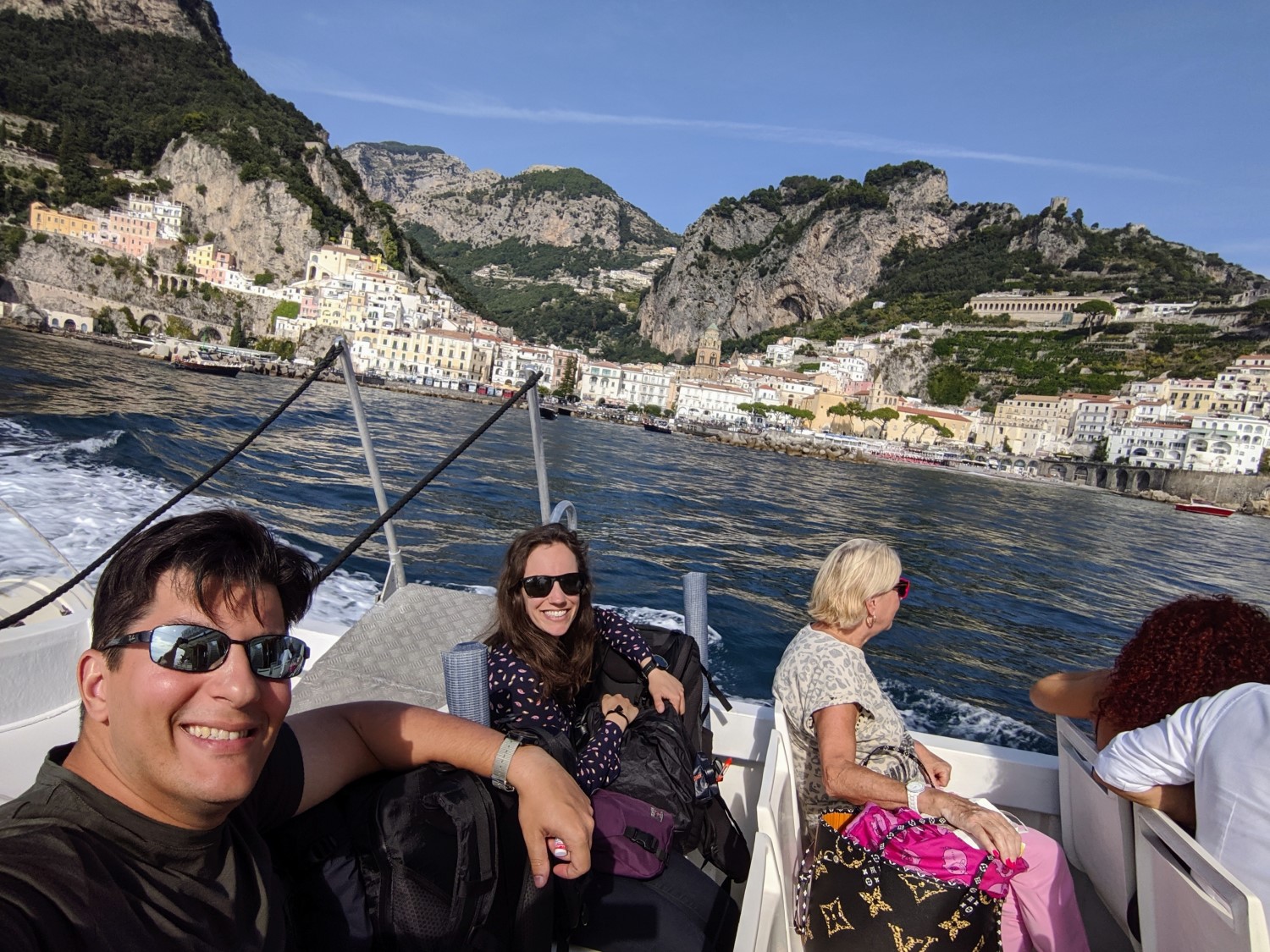 Yes, definitely. I don’t know that I have any urgency to revisit the places in the Amalfi Coast that we’ve already been (though I wouldn’t complain about ending up there again). However, we really only explored the eastern side of the Amalfi Coast, and there’s a lot to see and do on the western half as well.

Absolutely! I really wanted to visit Pompeii, Capri, Sorrento, Gragnano, Naples, but we ran out of time!