The day prior to us leaving the Amalfi Coast was the final day the ferry to Salerno would be operating earlier than 10:00 AM. This was very unfortunate for us because it meant we’d have to take a bus to Salerno in order to catch our 10:00 AM train.

Up to this point, we had managed to avoid taking the bus during our time in Amalfi, save one reasonably unpleasant experience. We were hoping to avoid taking another bus at all costs- all the winding up and down the hillsides, through hairpin turns and narrow lanes between buildings, and of course the inevitable reversing back up the road to allow for another bus to get by… all while you may or may not have a seat on the bus due to the large crowds.

Earlier in the week, our short bus ride down from Agerola to Amalfi to catch the ferry to Maiori left us both feeling green. With that in mind, it should be apparent why we really should have reconsidered taking the hour long bus ride from Maiori to Salerno despite having few other options…

We got on with our backpacks and it was nearly standing room only. There were a couple scattered seats in the back of the bus, but they were impossible for us to reach- not to mention there was no overhead storage for our bags. We reached the middle of the bus (of course it had immediately started moving), where there was an additional door with steps, which gave us room to stand with backpacks along with one other woman. For the first five minutes we fought gravity as the driver tossed the bus about the curvy road at frightening speeds. Our backpacks were not (and are not) terribly heavy, but it was definitely enough to throw us off balance. At this point, a gentleman felt bad enough for me that he moved from the aisle to the available window seat, giving me a respite from gravitational forces as I sat with my bag taking up my entire lap. This gave room for Ryan to remove his bag and place it on the floor, making it slightly easier for him to hold on through the twists and turns, though he was already pouring sweat as a result of the heat, motion sickness, and exertion required to stay upright. At this point, we were only ten minutes into the ride.

We made a few stops picking people up and suddenly the aisle was crowded with locals. Ryan also had to share the tiny doorwell space with far more people than could be considered safe. Luckily there were other tourists with luggage getting on and we noticed they were able to put bags under the bus, so Ryan hopped out briefly and added his bag there to free up additional space. There were several older Italian ladies who, under normal circumstance, I would have given my seat to except for the fact that there was no room for my bag except for my lap. There was no way I would have been able to hand it off to Ryan for under the bus storage at this point. Surprisingly, no one else offered them a seat. Some remained standing in the aisle and some ended up sitting on the stairs around Ryan.

As our journey continued, it became ever more miserable than we thought possible. The turns were so intense even sitting you had to brace yourself. The poor people standing in the aisle (and the older ladies in small heels) had to white-knuckle the seats to keep from falling into others. Of course, the additonal people in the aisle made it impossible to see out the front windshield, drastically decreasing Ryan’s and my motion sickness tolerance. This left us both feeling incredibly nauseated. We continued on like this, praying not to be ill all over other people, until the bus eventually arrived in Salerno.

However, I don’t mean we arrived at our stop at the train station in Salerno, but rather the very first available stop in Salerno over a mile from our destination. We pushed past people to get off and into the fresh air. Neither of us could have lasted one additional minute on the bus without disaster. Neither of us hurled, but it took a us a very long time to start feeling better. Ryan categorizes it as easily the worst experience of our trip thus far, as it qualified as torture. In retrospect, we should have shelled out for a taxi- no matter the price, it would have been worth it.

Thankfully we made it to our train in time and began our journey to the Italian Riviera. 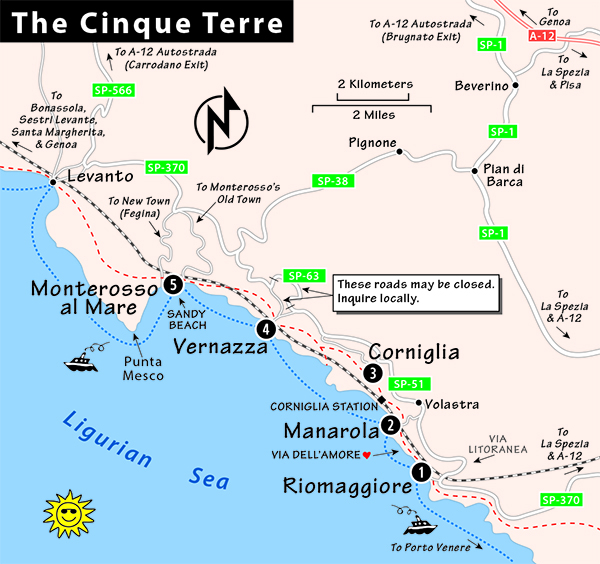 Our destination was Cinque Terre, the mystical coast of Italy that has become widely popular in recent years. Cinque Terre is a national park made up of five towns (cinque means five in Italian) along the west coast of Italy, bordering the Ligurian sea. It’s not really possible to drive to any of the towns, but there is a train line that with stops at each city along the entire coast. The other popular option to get around is by hiking from city to city.

We opted to get a place just south of Cinque Terre, in La Spezia. Despite it not being one of the Cinque Terre towns, it’s much cheaper to stay in, provided us with far more food options, and is just a a 10 minute ride from Cinque Terre. We would recommend this to anyone else visiting the area- unless you’re planning on getting accommodations with a view in one of the towns, there’s no point in paying the heavy premiums to stay in Cinque Terre proper. 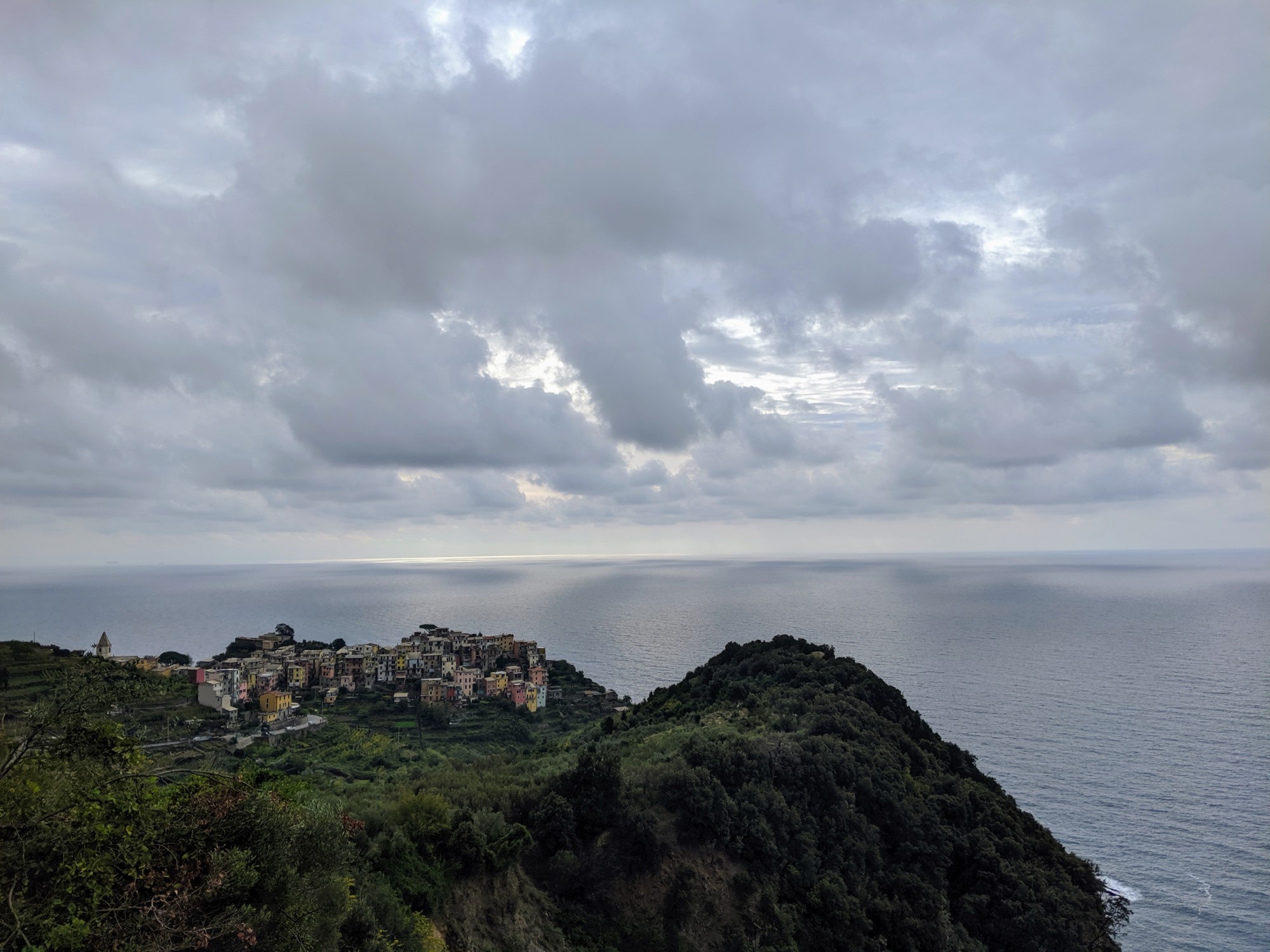 There are many similarities between Cinque Terre and the Amalfi Coast. Both contain seaside villages built up on hillsides with breathtaking views and are full of tourists. However, Amalfi is a much bigger region which makes it easier to escape the crowds. Amalfi also has much more of a citrus-y, southern Italian vibe, contrasted with Cinque Terre’s more northern, soft, pastel fishing villages. We gave ourselves more time in Amalfi and I would say that it’s possible to “see” Cinque Terre in a day. That being said, I’m glad we got the chance to see both! (Pro-tip: we also looked up the cruise ship schedule to make sure we visited when there weren’t any big ships docking). 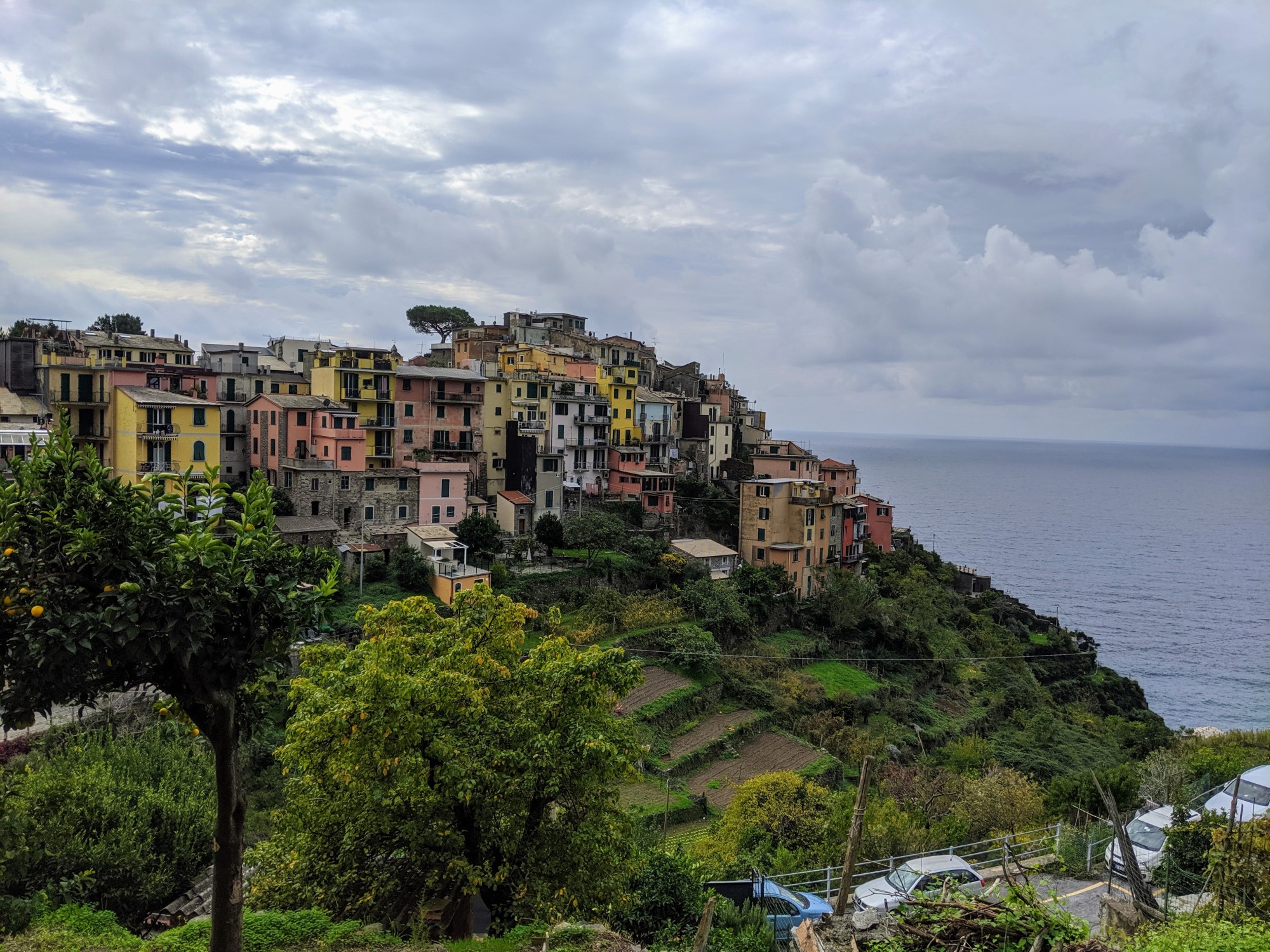 There was plenty of rain in the forecast, but a slight window of sunshine allowed us to jump on the train our first morning and head to Cinque Terre. We didn’t have a solid plan, we just wanted to explore and hike if possible. We opted to get off the train at Corniglia (I had read the crowds are smaller there due to the town being a few hundred stairs up from the train station). Corniglia was very charming but it was apparent there would be a large contingent of tourists that’d soon be swarming the town. We got a quick coffee and bite to eat, then headed to the start of the northbound hiking trail- to the next town of Vernazza. 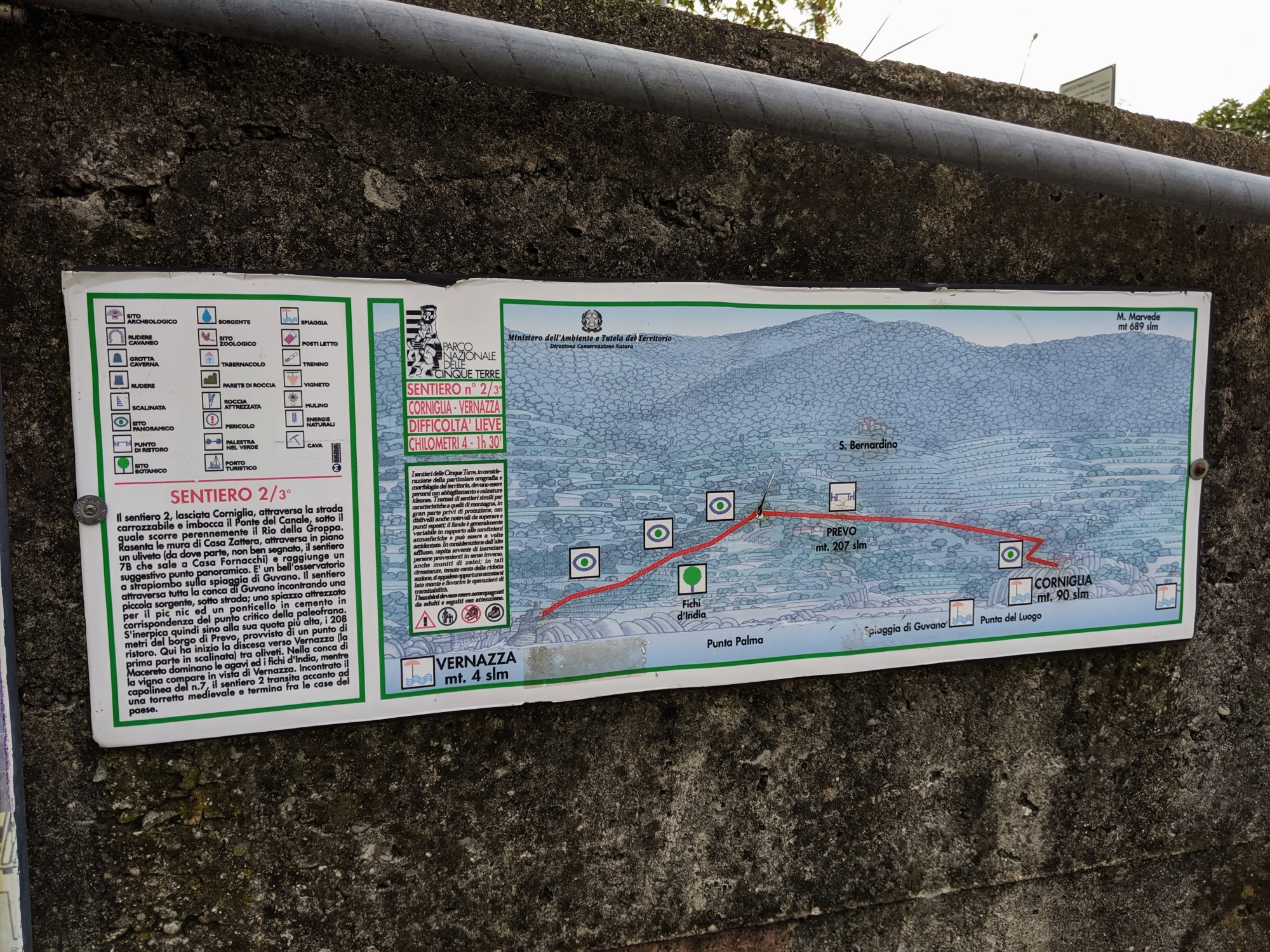 Hiking requires the purchase of a ticket (I believe it was 7 Euro per person) at the trail head. It wasn’t super crowded, and ended up being quite a nice trail with plenty of greenery. The advantage of starting the hike in Corniglia is that the trail goes mostly downhill to Vernazza. 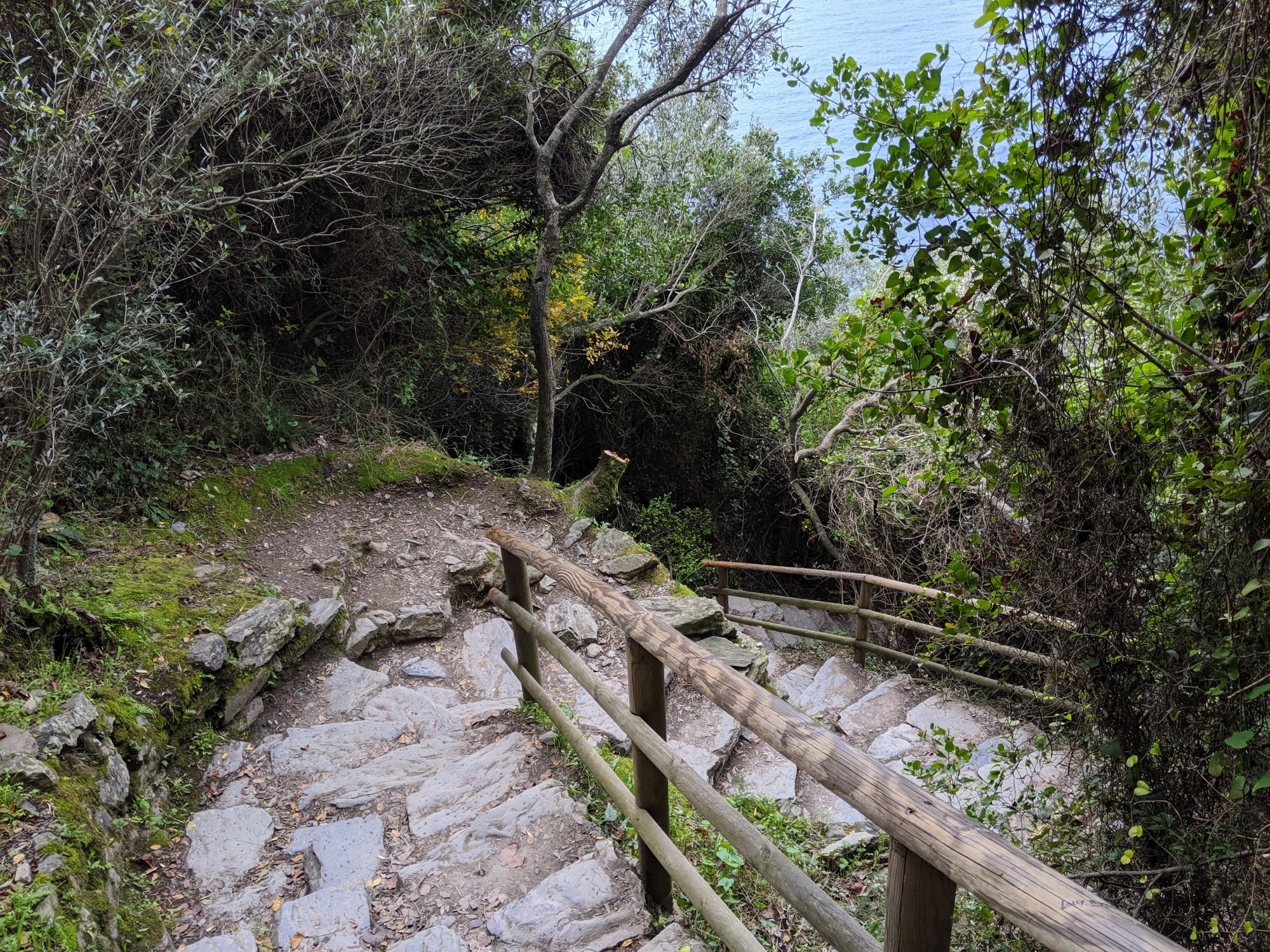 We were grateful of our choice as we passed people coming in the opposite direction; watching them pouring sweat as they climbed the endless sets of stairs. The trail led us to the quinessential Instagram shot of Vernazza 😜 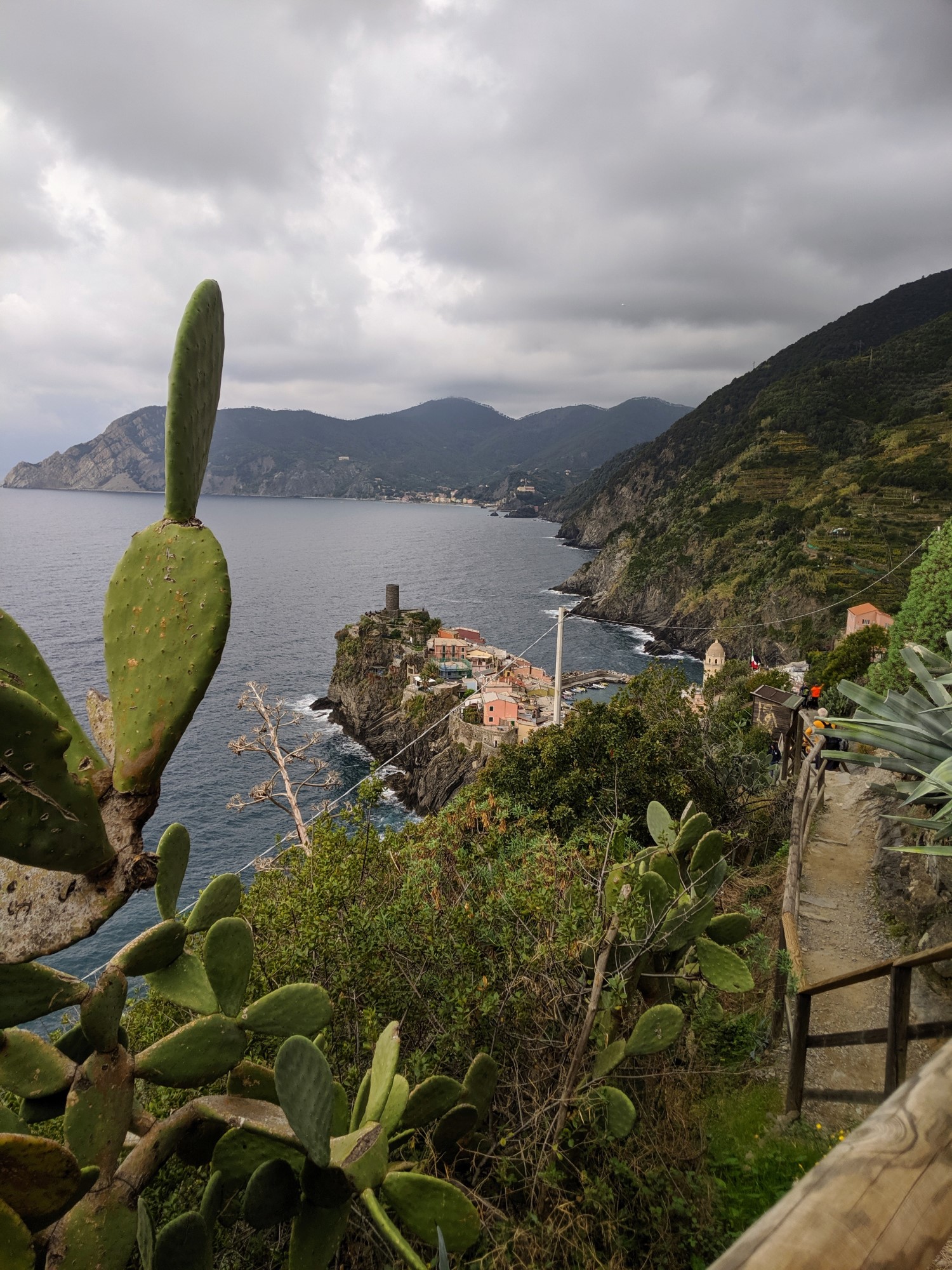 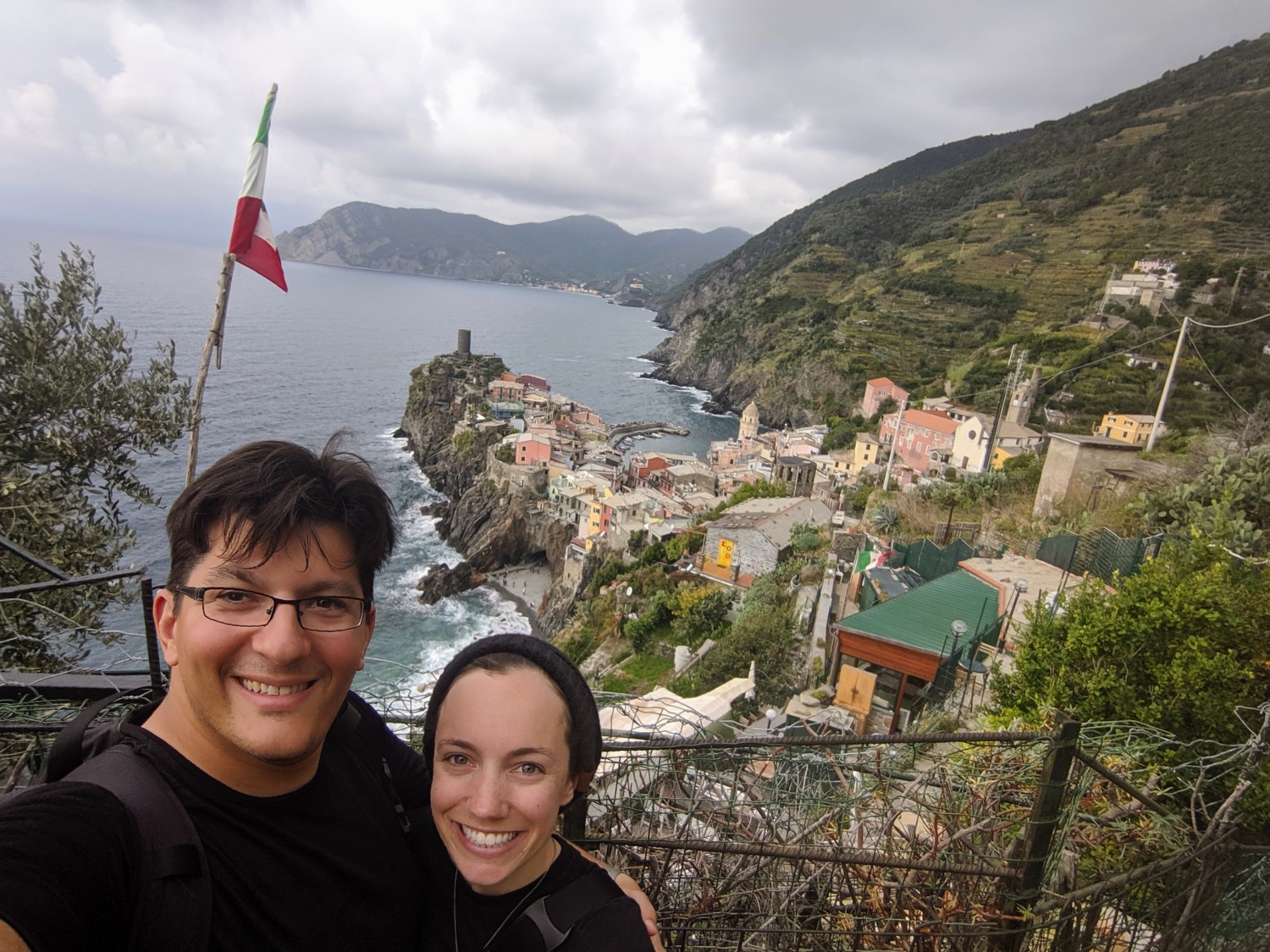 Vernazza was cute and charming, but unfortunately the rain started to pick up not long after we arrived. We had just enough time to explore the small castle there, but the first few drops of rain quickly became a torrential downpour and we opted to head home. 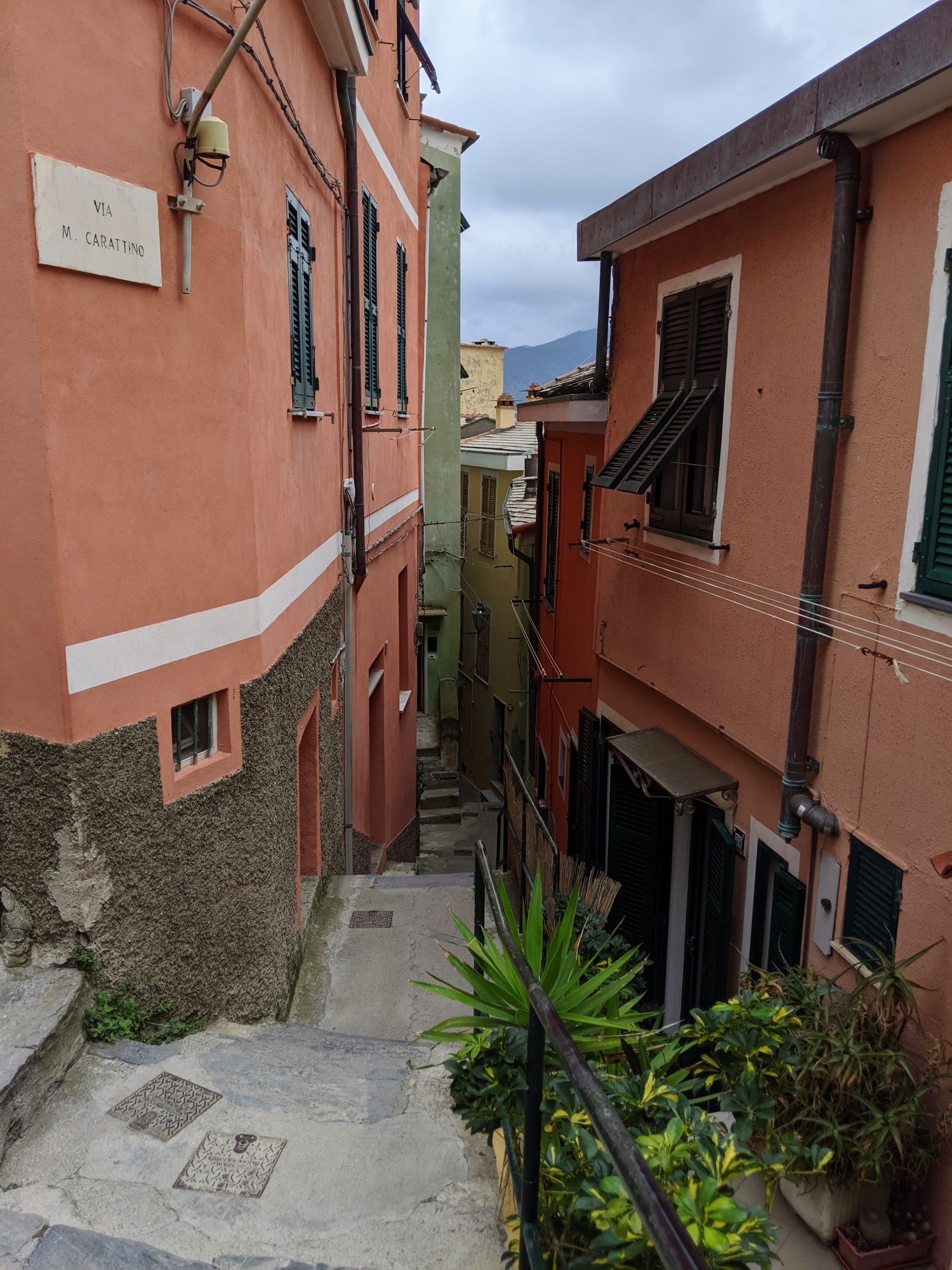 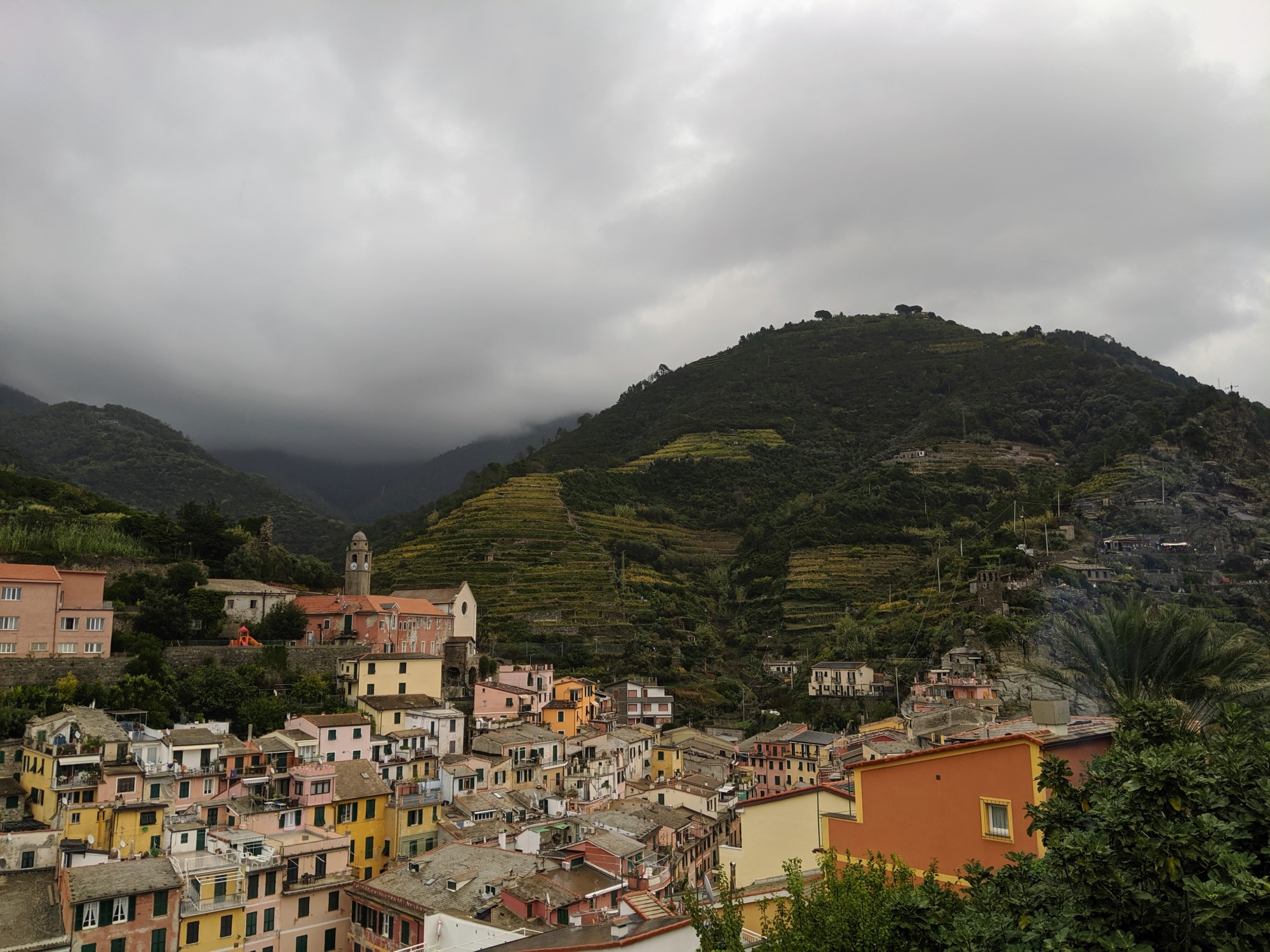 The following day we headed to the city of Genoa, but not before buying the best focaccia in the world in La Spezia at Panificio Triangoleria Rizzoli, which was an incredible recommendation by our Airbnb host. Thankfully our Italian had improved after spending almost a month in Italy- we had to make our order fully in Italian, as there was absolutely no English spoken at the shop.

Along our the way to Genoa, we opted to make a last minute stop in Moneglia for pizza for lunch. We had heard that it is often referred to as the ‘sixth’ town of Cinque Terre due to its beauty and scenery, but it’s not nearly as well known, meaning fewer crowds.

We arrived to find a very quiet town- a little too quiet for our liking. We found the pizza spot easily, but of course it was closed! We ended up at a wine shop that sold delicious, inexpensive wine by the liter and hung out for a bit tasting wines, olive oils, and limoncellos before the owner had to close for lunch (still a common occurrence throughout Italy). We bought a liter of red wine and brought it (and our remaining focaccia) to a bench overlooking the beach with an hour-ish to kill before our train to Genoa. It wasn’t exactly how we thought our day would turn out, but we still had an enjoyable time. 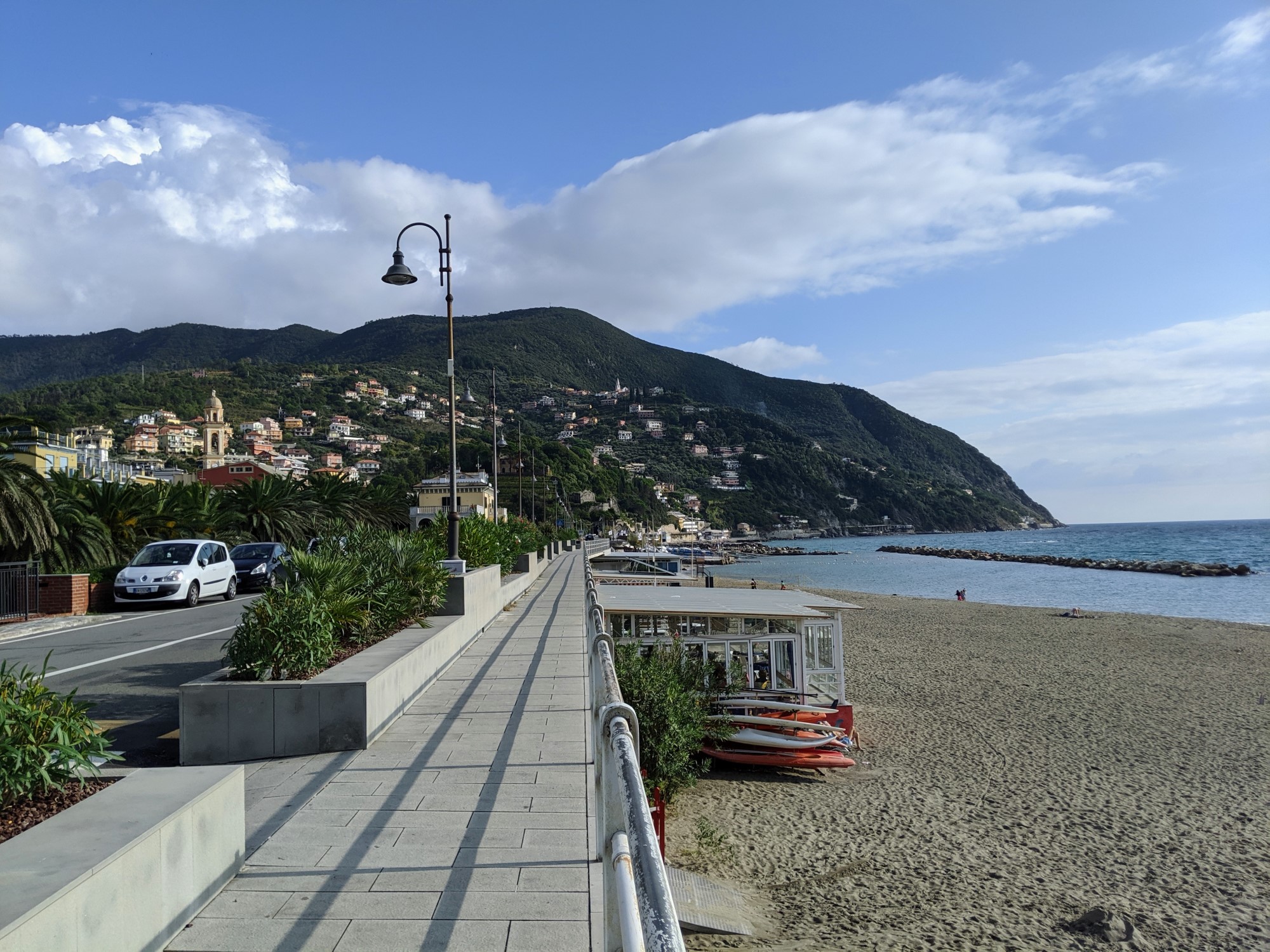 We also came across the scariest toilets in Europe: the dreaded squatty potty! 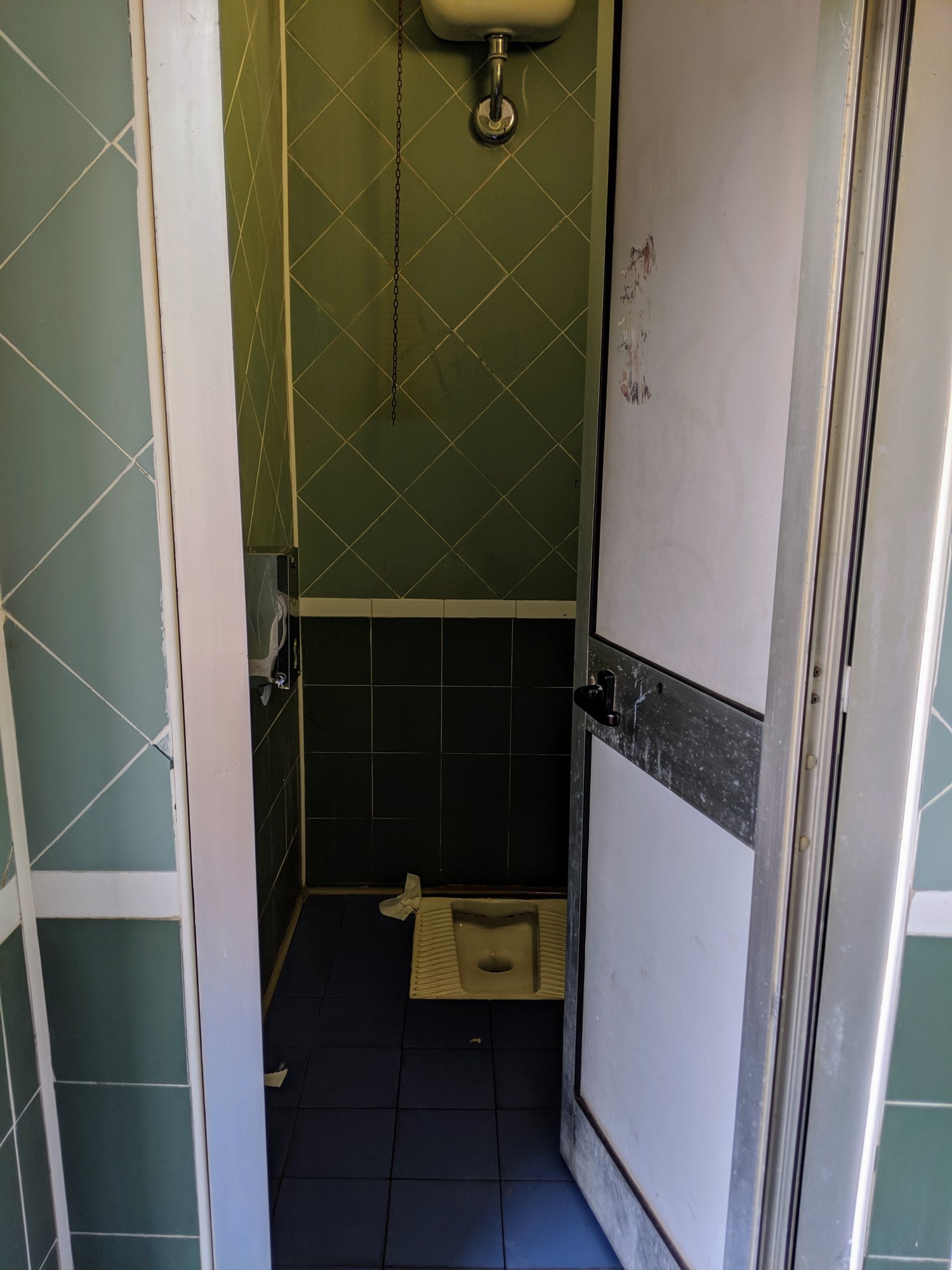 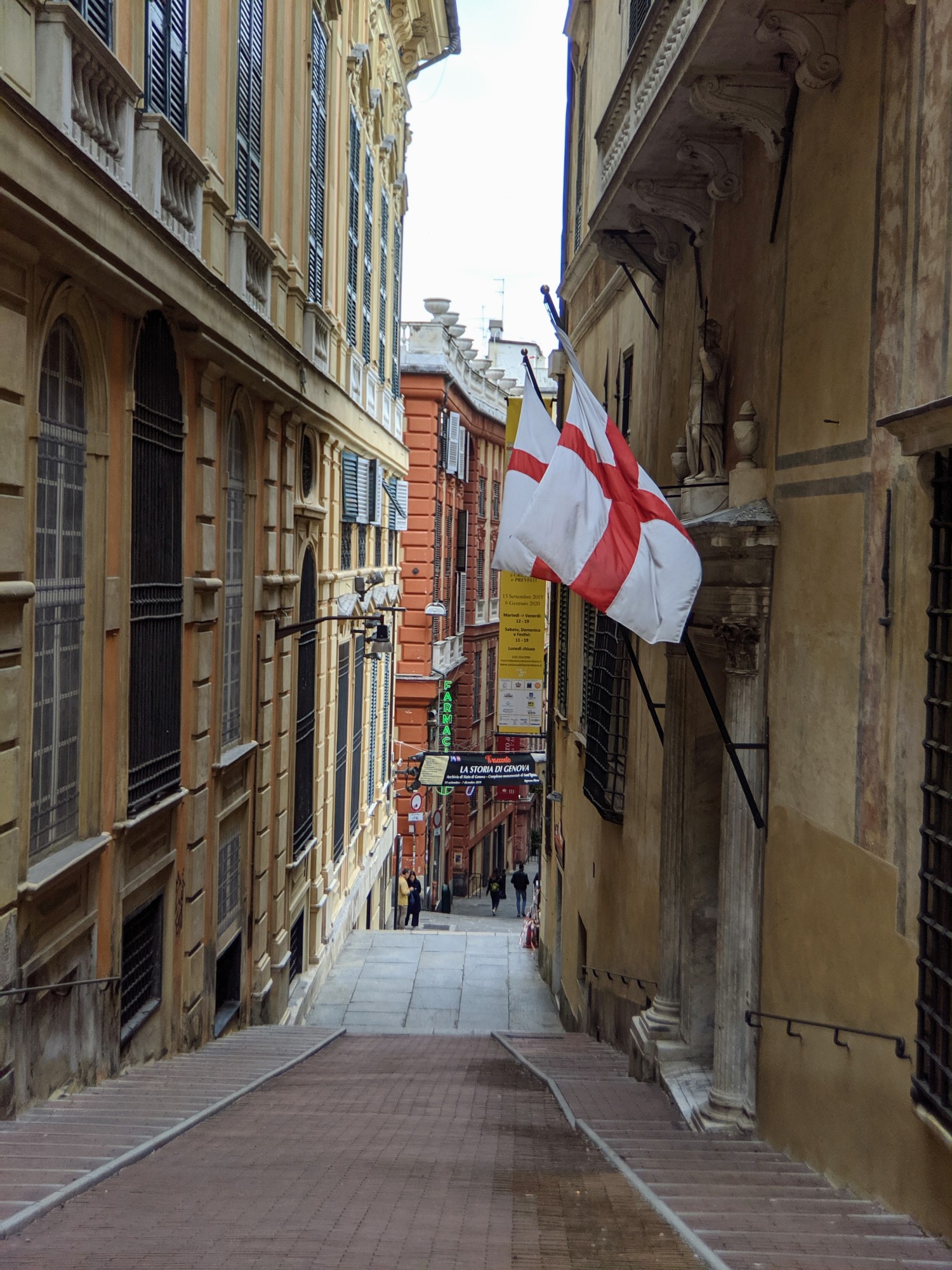 Genoa is an interesting port city with a medieval labyrinthine city center that's far too easy to get lost in. Much of the city feels grungy, grey, and cold. Everything about it felt to be in stark contrast to the other Italian cities we've visited. WE LOVED IT! 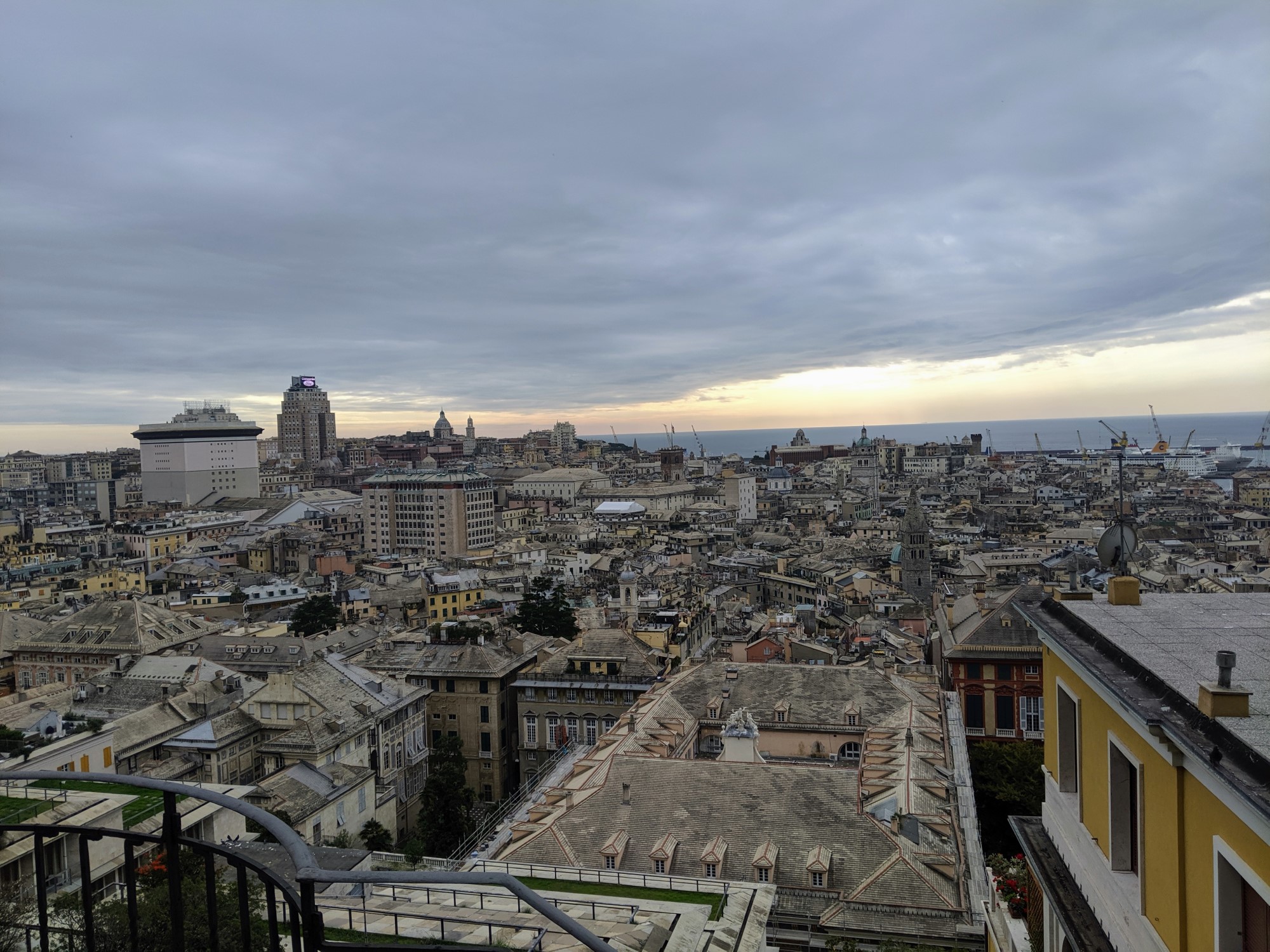 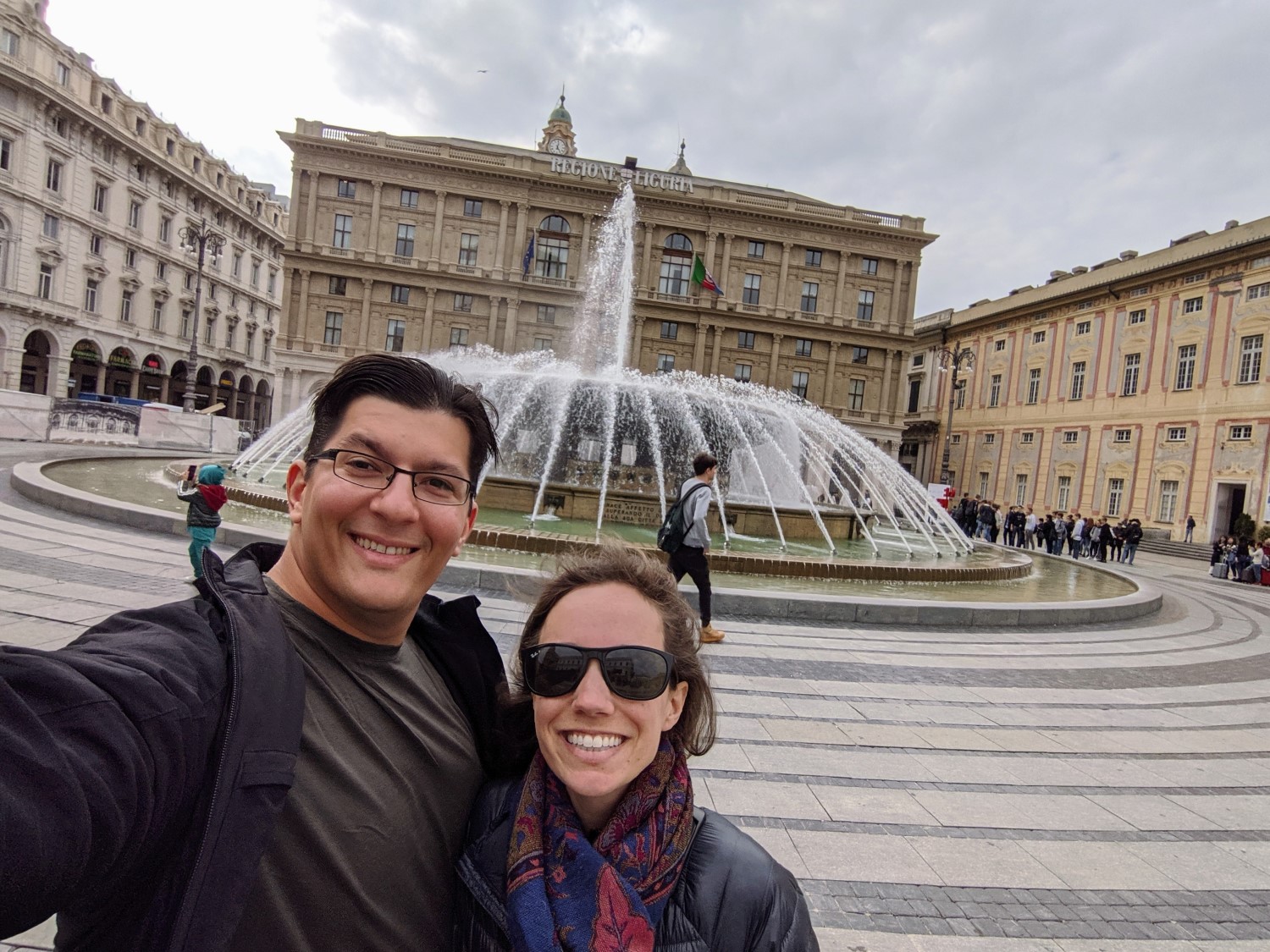 Unlike Rome or Florence, which often feel Disneyland-esque, Genoa felt authentic and raw. There were still plenty of tourists but not to the degree that it felt suffocating, as it often did in other parts of Italy. We were slightly hesitant at first, because Genoa has a reputation for being unsafe, dirty, and full of prostitutes, but this wasn't our experience at all. 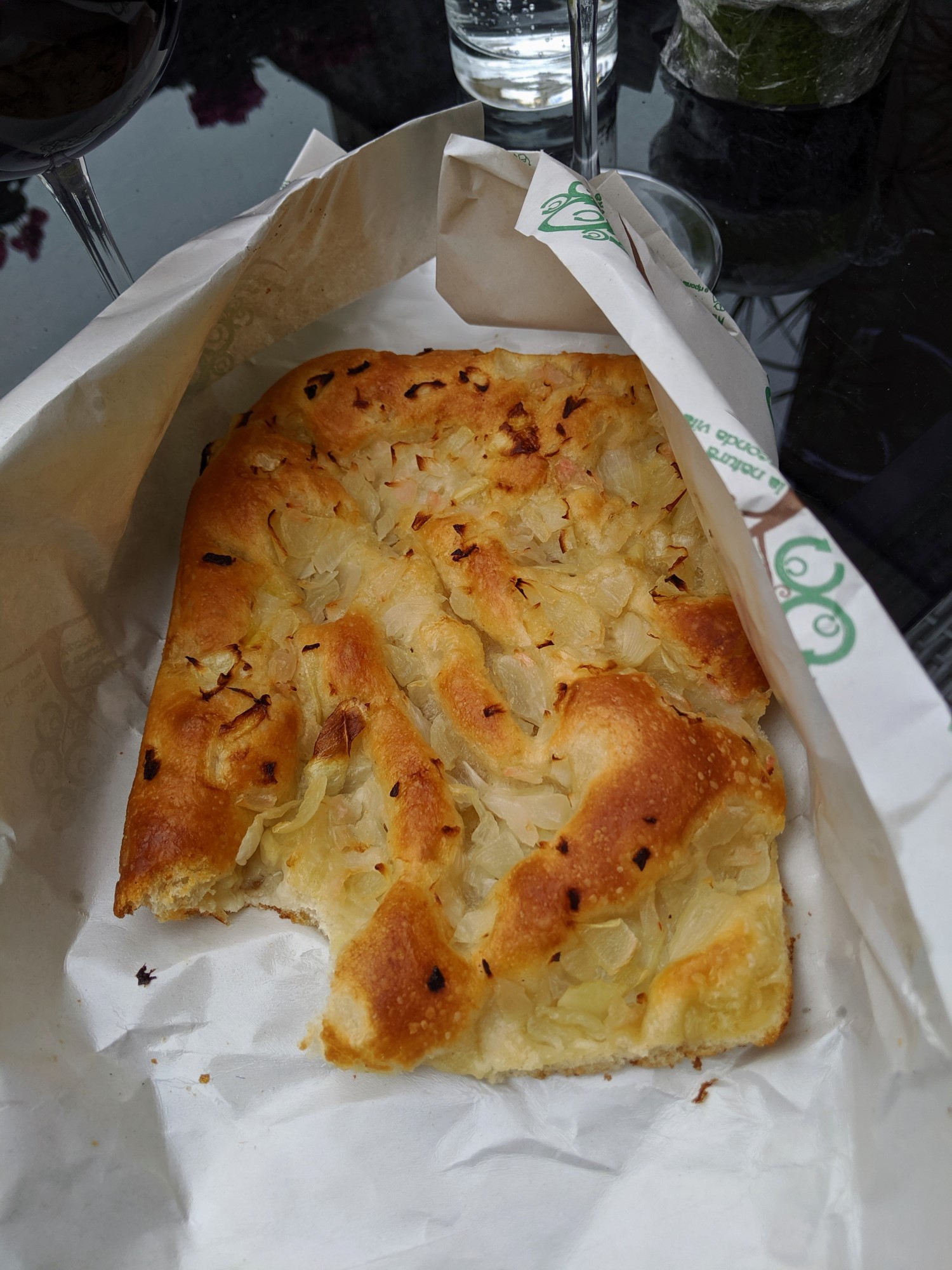 We found more fabulous focaccia and AMAZING pesto! We've never had better pesto before or since. We opted to back multiple times to the same place and even took some with us when leaving Genoa. I would have gladly consumed it with nothing but a spoon. 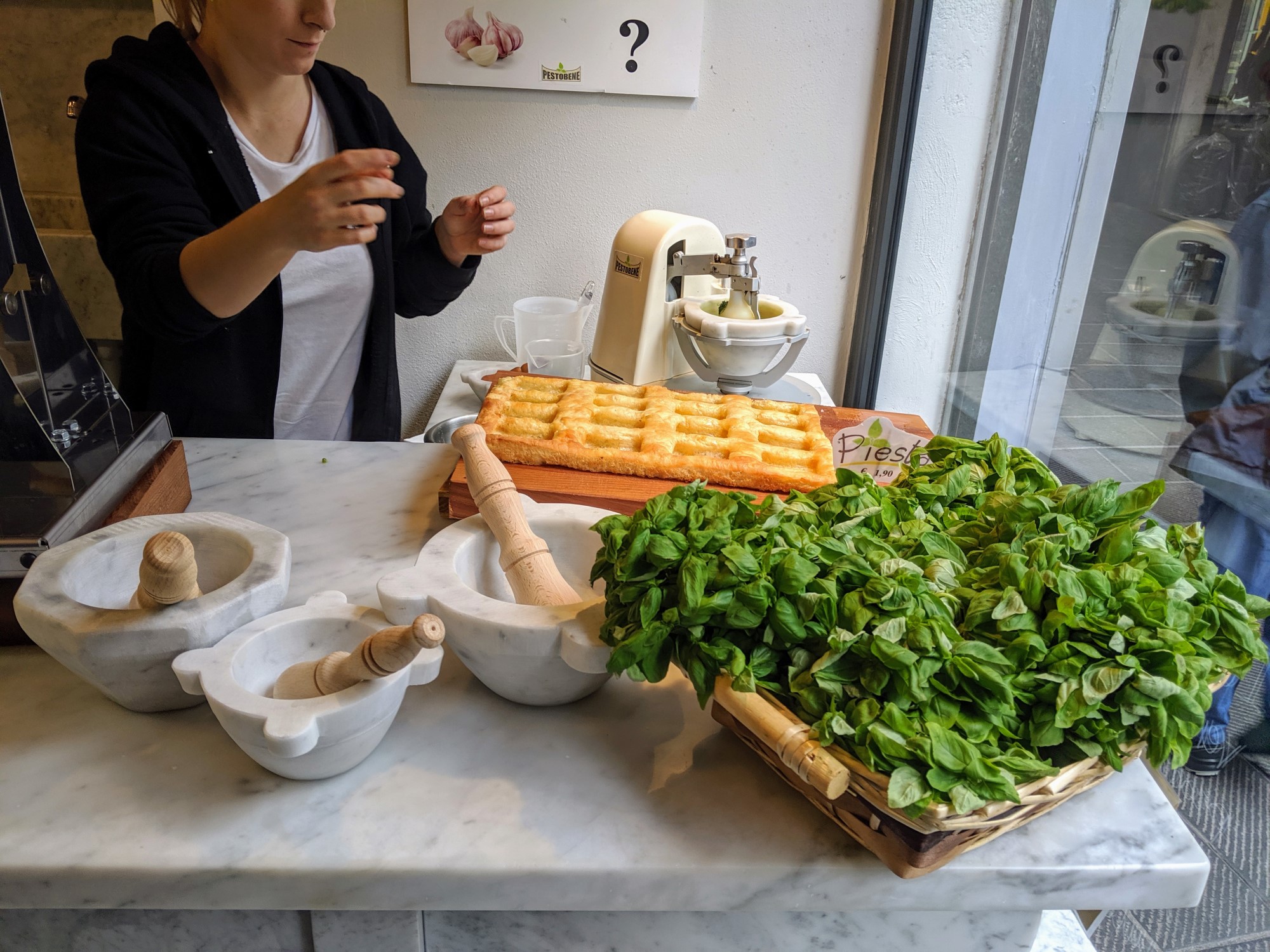 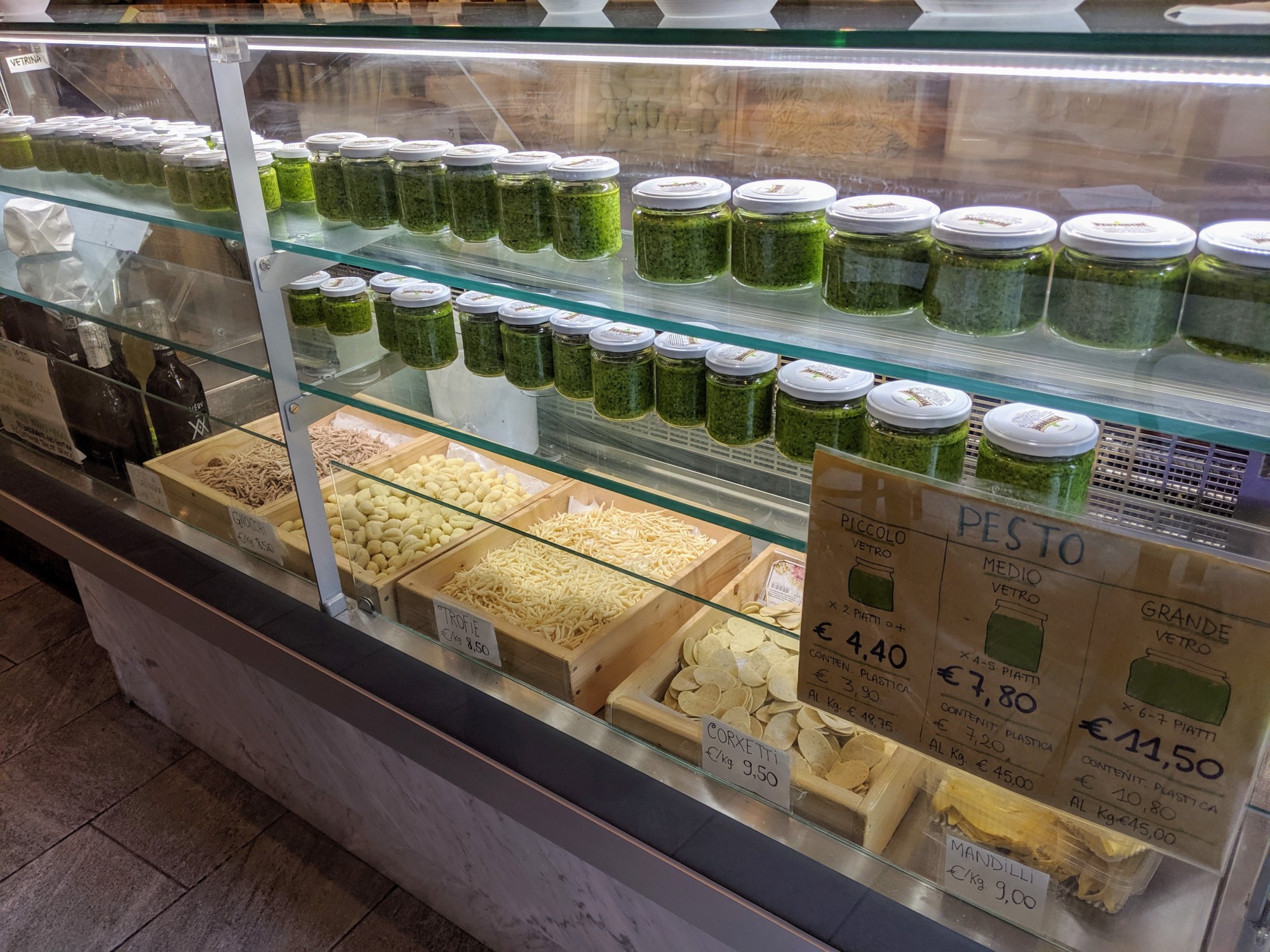 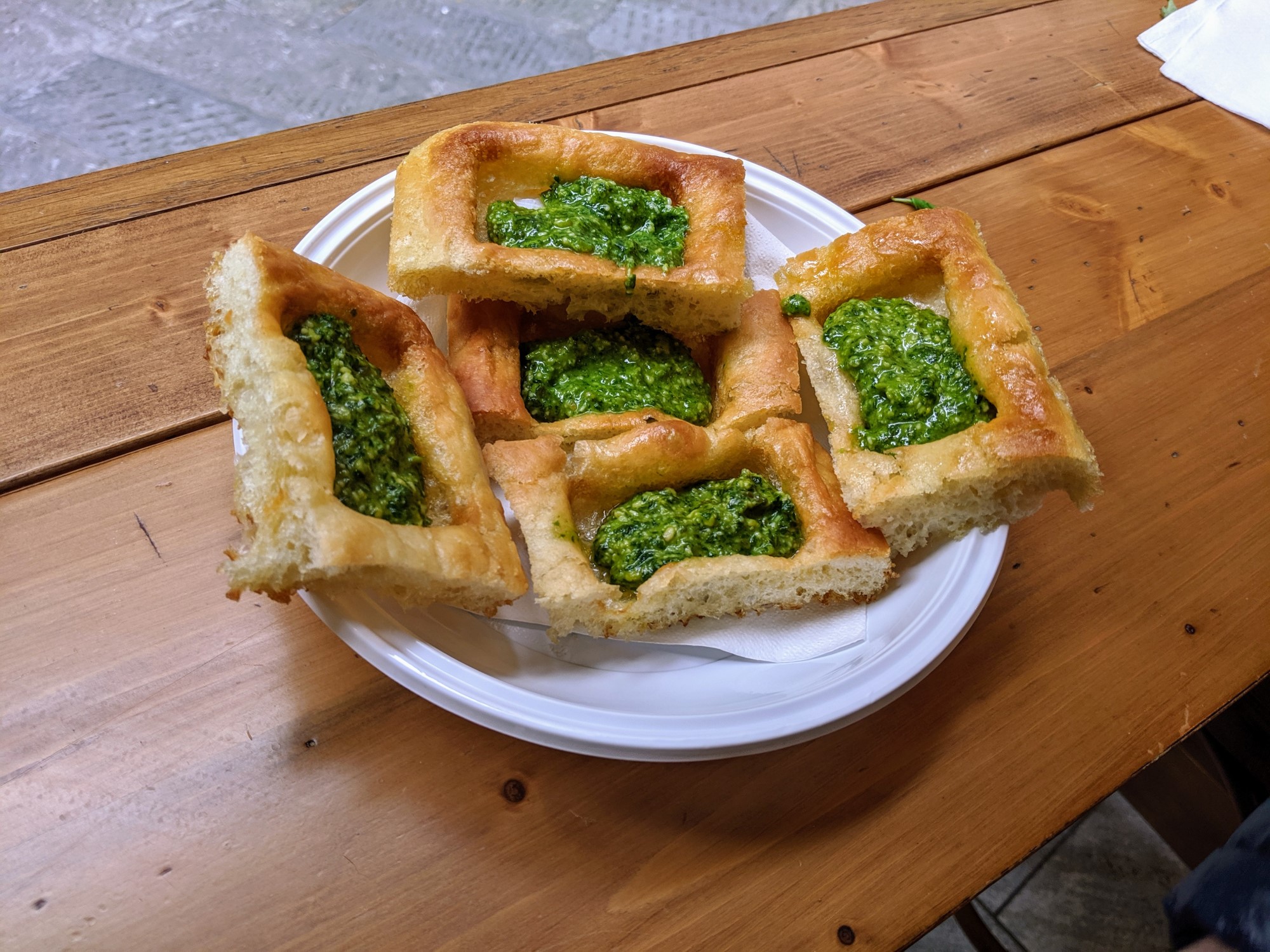 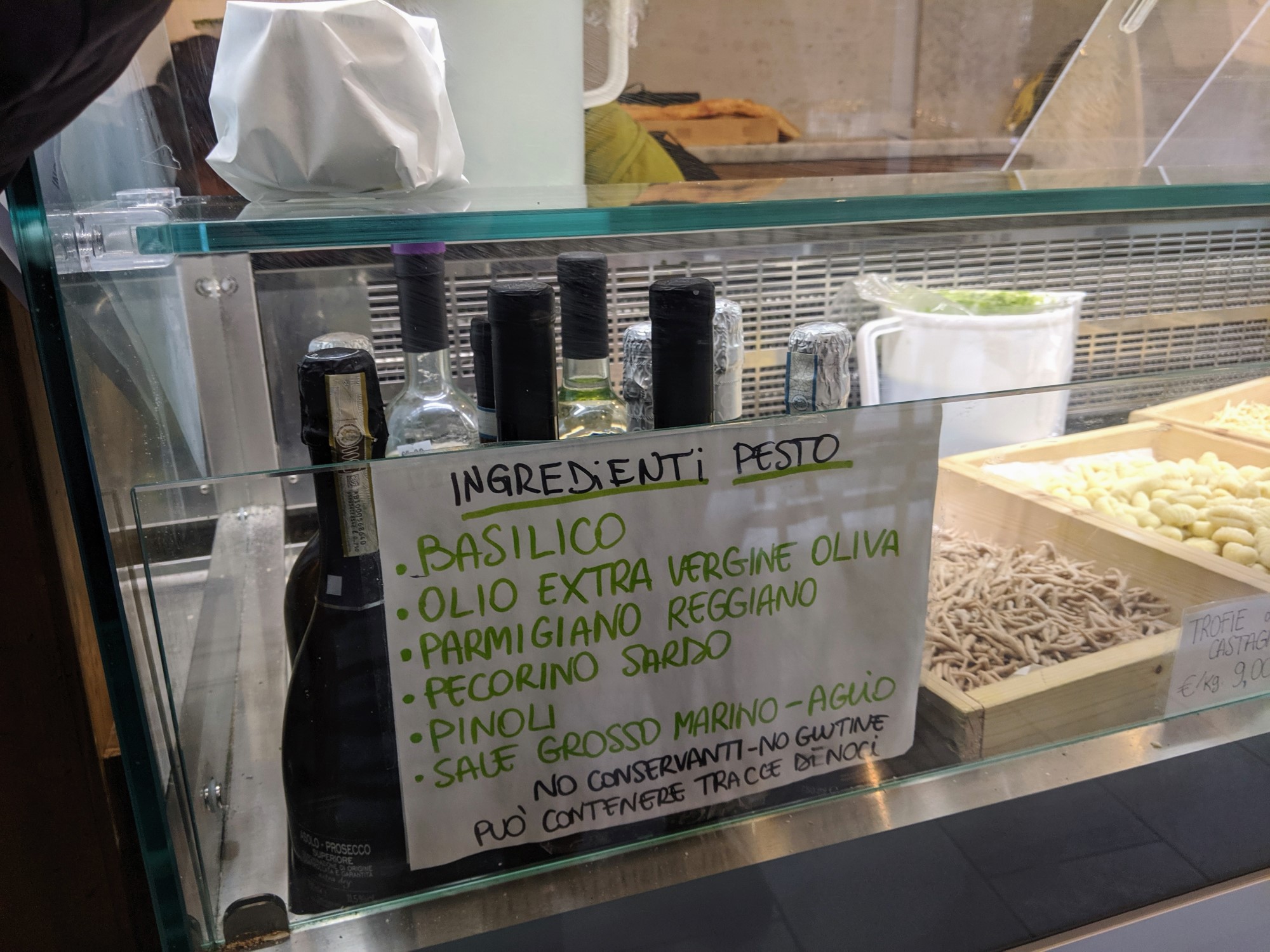 Our other great food find was panera, which is a coffee-flavored whipped cream you eat like gelato, that appeared to be unique to the region.

Besides eating, we walked to the port, took the public transport elevator to the top of the hill, and walked past Christopher Columbus’ house. One afternoon we made good use of our terrace, our remaining wine from Moneglia, and our focaccia and pesto 😎.

As this was our final stop in Italy, we made sure to get as much gelato as we could.

Genoa feels like a city to spend a long time in, and the surrounding area has much left to explore. Also, due to inclement weather we really only got a taste of Cinque Terre, meaning we need to go back for more. Speaking of taste… focaccia please.

Seriously, I would go back only for the focaccia and pesto.