After spending over a month in Italy, it was finally time to go. We boarded the train from Genoa and started making our way along the coast into France- specifically the French Riviera.

We arrived in Nice in the late afternoon and checked into our new Airbnb a block away from the train station. Unfortunately it was raining as we arrived, and continued to do so for the remainder of the day. We opted to brave the rain and headed to a grocery store to pick up some food and necessities before heading back and calling it a day. 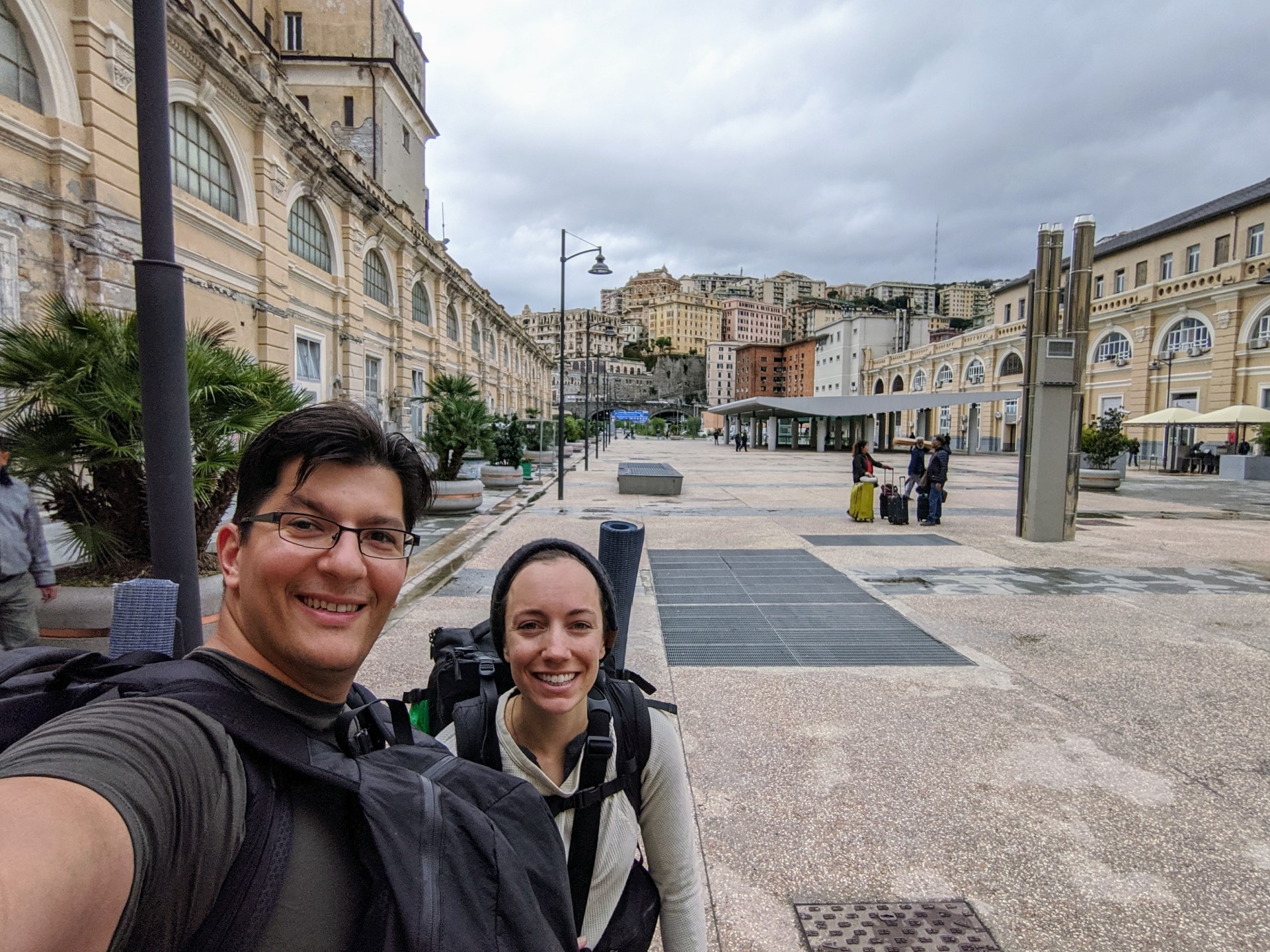 The next morning the weather had cleared up and we took advantage by heading to the boardwalk. We spent much of the day walking along the beach in sunny but brisk weather- the ocean was still churning heavily as a result of the previous night’s storm. 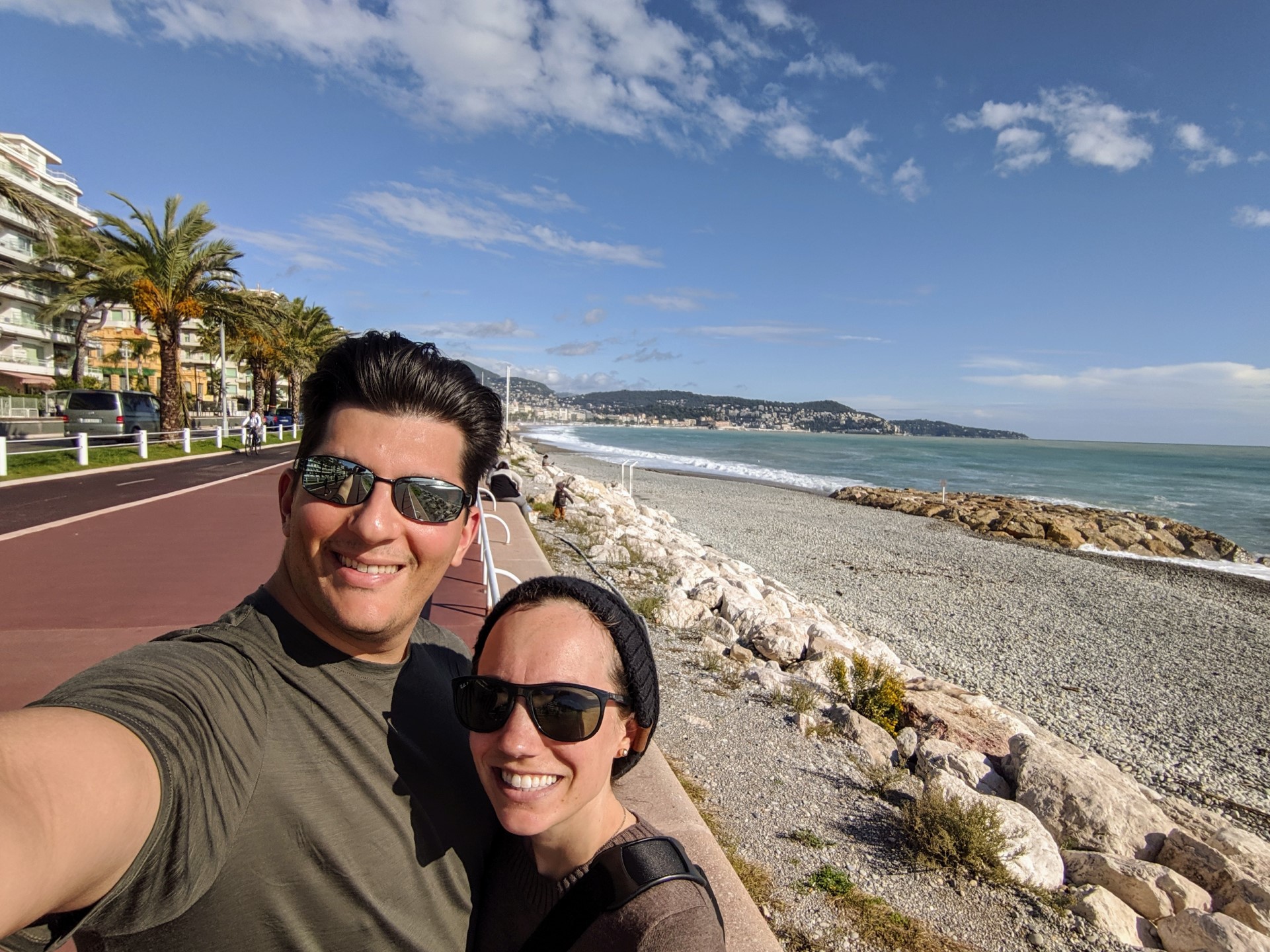 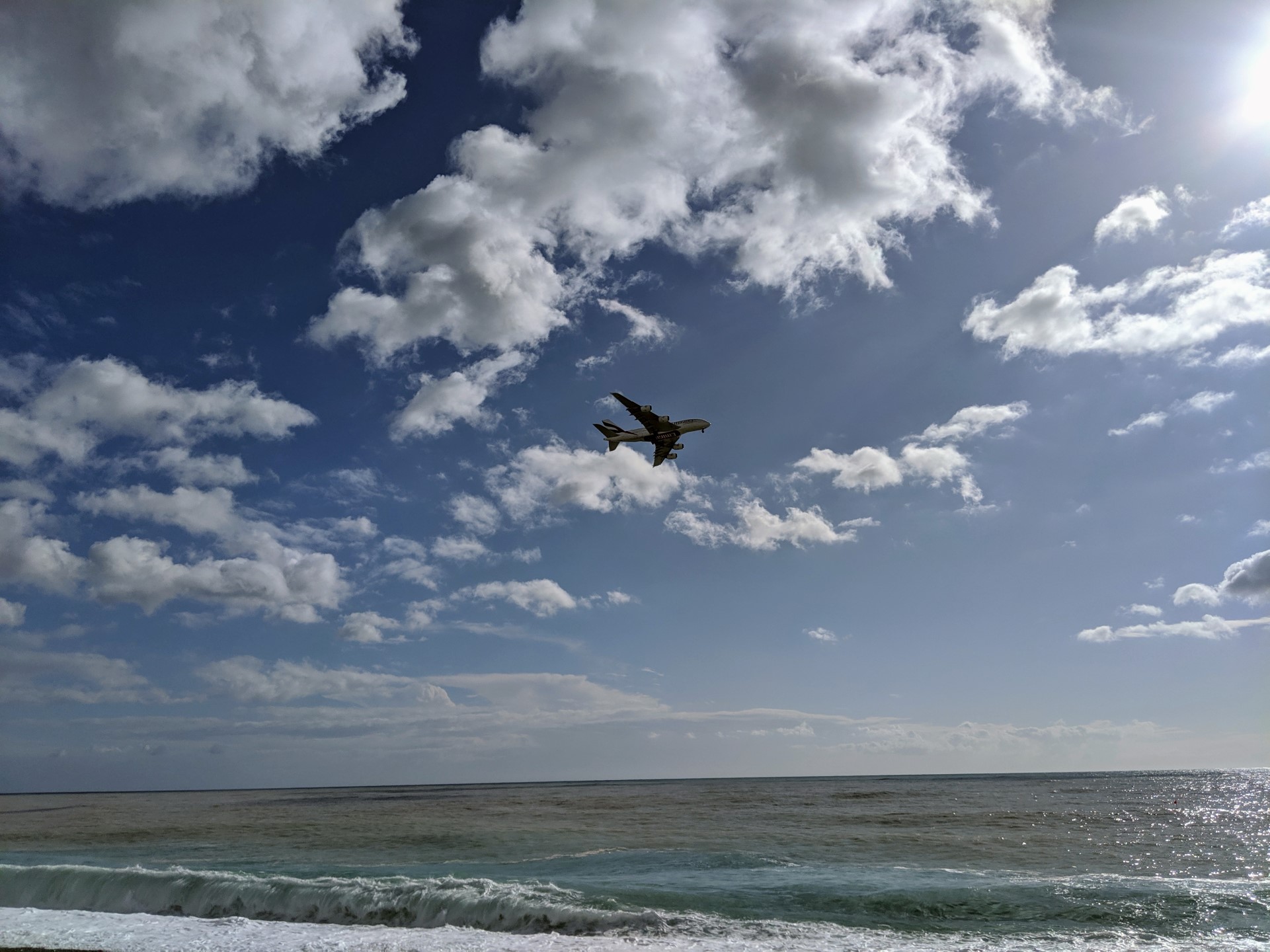 As we walked along the Promenade des Anglais, we noticed the abundance of bollards lining the walkway. It was a stark reminder of the terrorist attack that killed over 80 people using a truck to murder people as they were celebrating Bastille Day on the boardwalk in 2016. Eventually we made it to Jardin de la Légion d’Honneur where there’s a memorial for the victims of the attack. It was a sobering experience, and reminded us of the difficulties France (and much of Europe) are facing regarding the looming threat of radical Islamic terrorism. 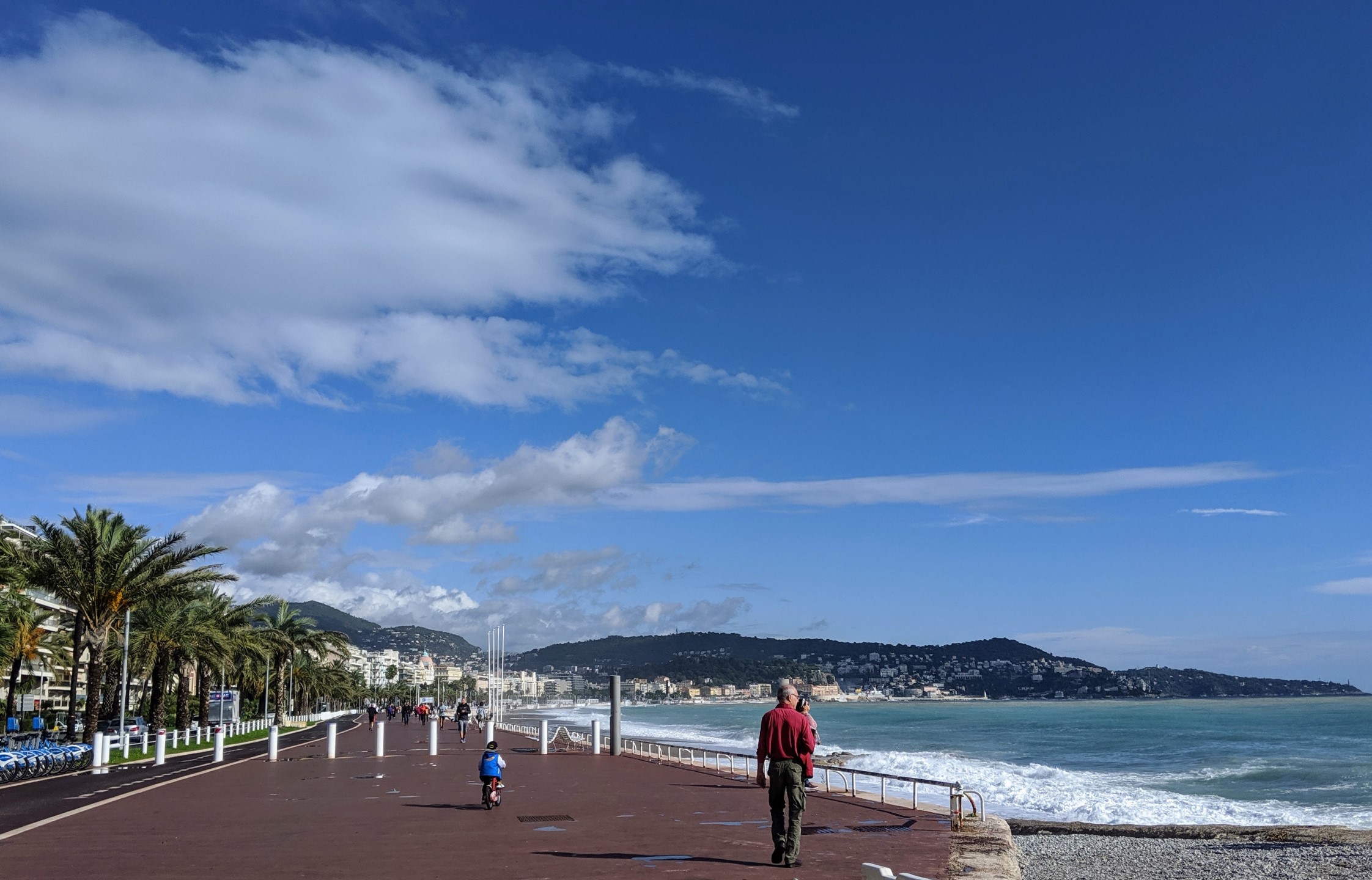 We continued walking along the promenade for awhile and eventually we finally built up an appretite. We found a small cafe/bakery that specialized in cookies, but also offered sandwiches thankfully- as we were quite hungry (though we still enjoyed some cookies of course). After eating we spent a bit more time exploring the city, then headed back for me to be able to do some work.

There are primarily three activities to be found in Nice- spending time at the beach, going to the museums, and exploring the French Riviera. As we had already done the first, it was between the second and third options for the next day.

The following day had fantastic weather and we were determined to do some more sightseeing, so after Mollie went for a run along the beautiful Nice boardwalk, we hopped on the train and took a short ride to the country of Monaco.

I wasn’t quite sure what to expect going to Monaco. The only things I’ve seen located in Monaco have been James Bonds films and the Monaco Grand Prix. The people I know who have been talk about the sheer wealth and how nice the country/city are.

Arriving in Monaco it was very apparent this was no typical train station. The entire station and platform were located indoors, and everything was visibly upscale and quite clean- substantially cleaner than any of the French or Italian train stations.

We spent most of our day in Monaco just walking around. We walked around the port area, found some food, and headed up to the palace. As a place, it is quite nice- beautiful scenery, clean, nice buildings, etc. The country is considered the wealthiest in the world per capita, with over 30% of its residents being millionaires. Despite this, apparently it is far easier to relocate there than one might expect. 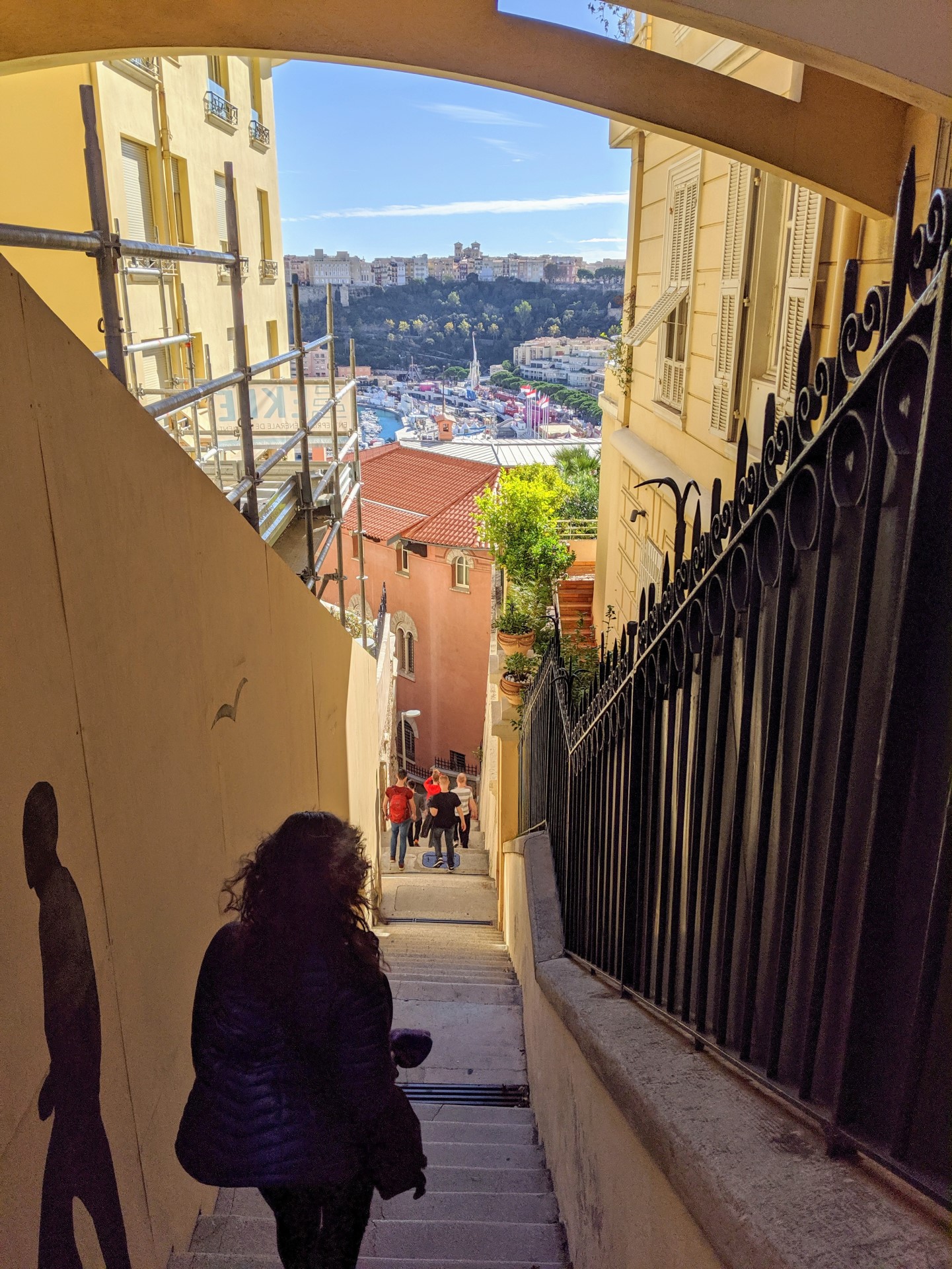 However, despite the appealing qualities of Monaco, it ended up feeling somewhat underwhelming. Something about it felt a little boring and a little sterile. Despite being a playground for the wealthy, it didn’t quite feel like a real city. Presumably being exceptionally wealthy is a requirement to truly enjoy Monaco, as there isn’t so much to do while on a budget. Unless there’s some sort of event going on, Monaco can be explored in about a single day. 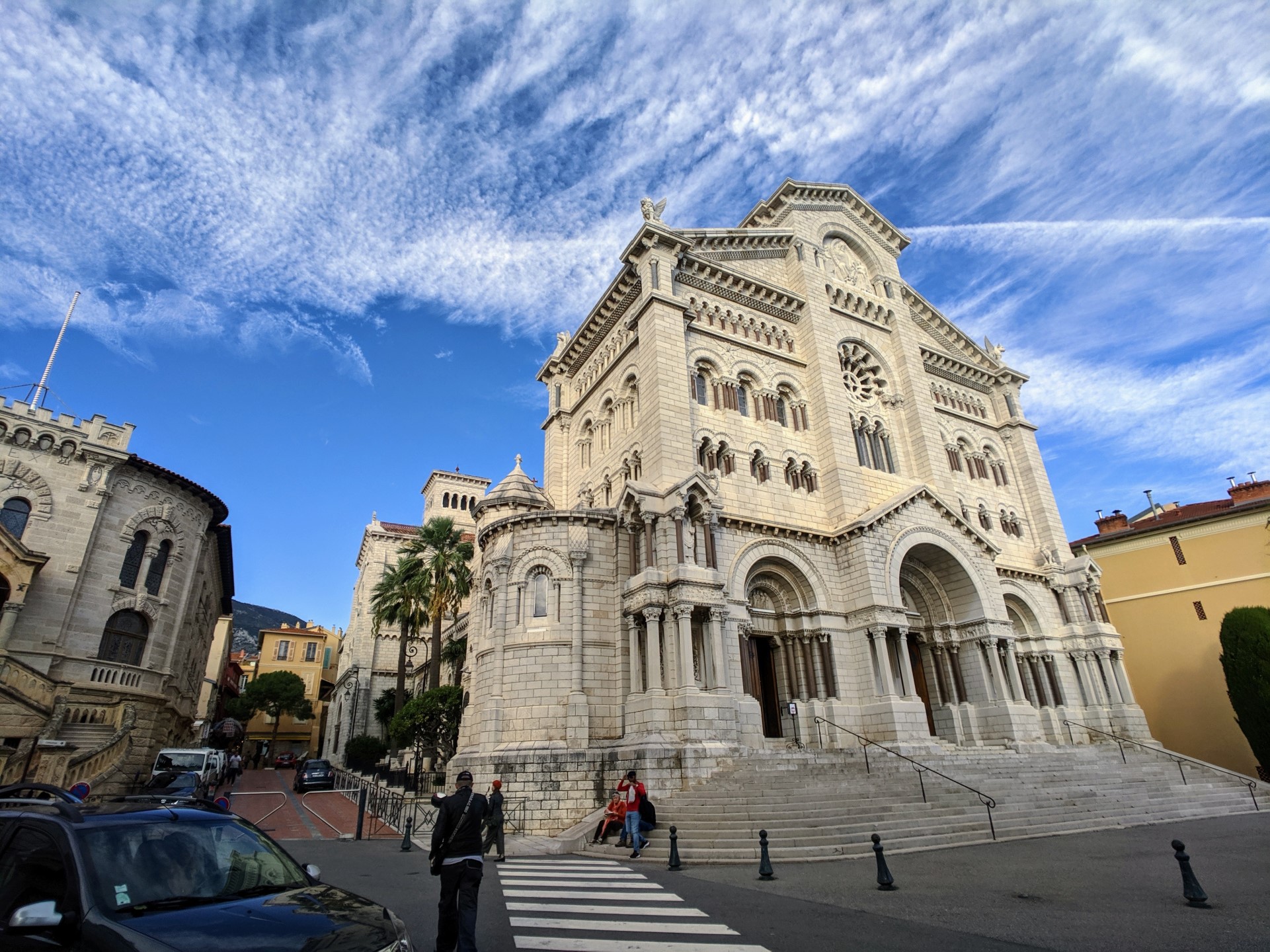 That being said, we did get some fantastic views from the palace. 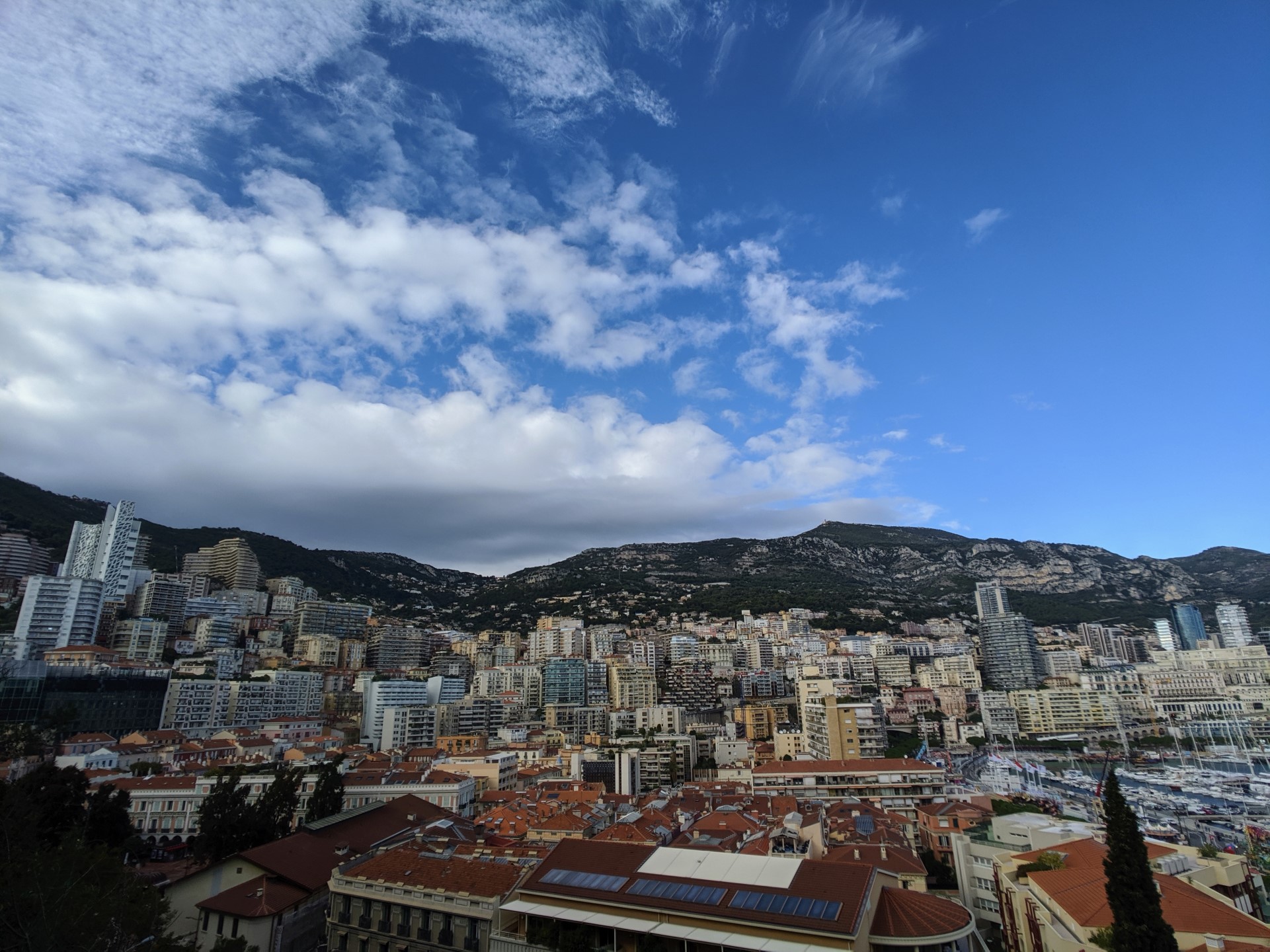 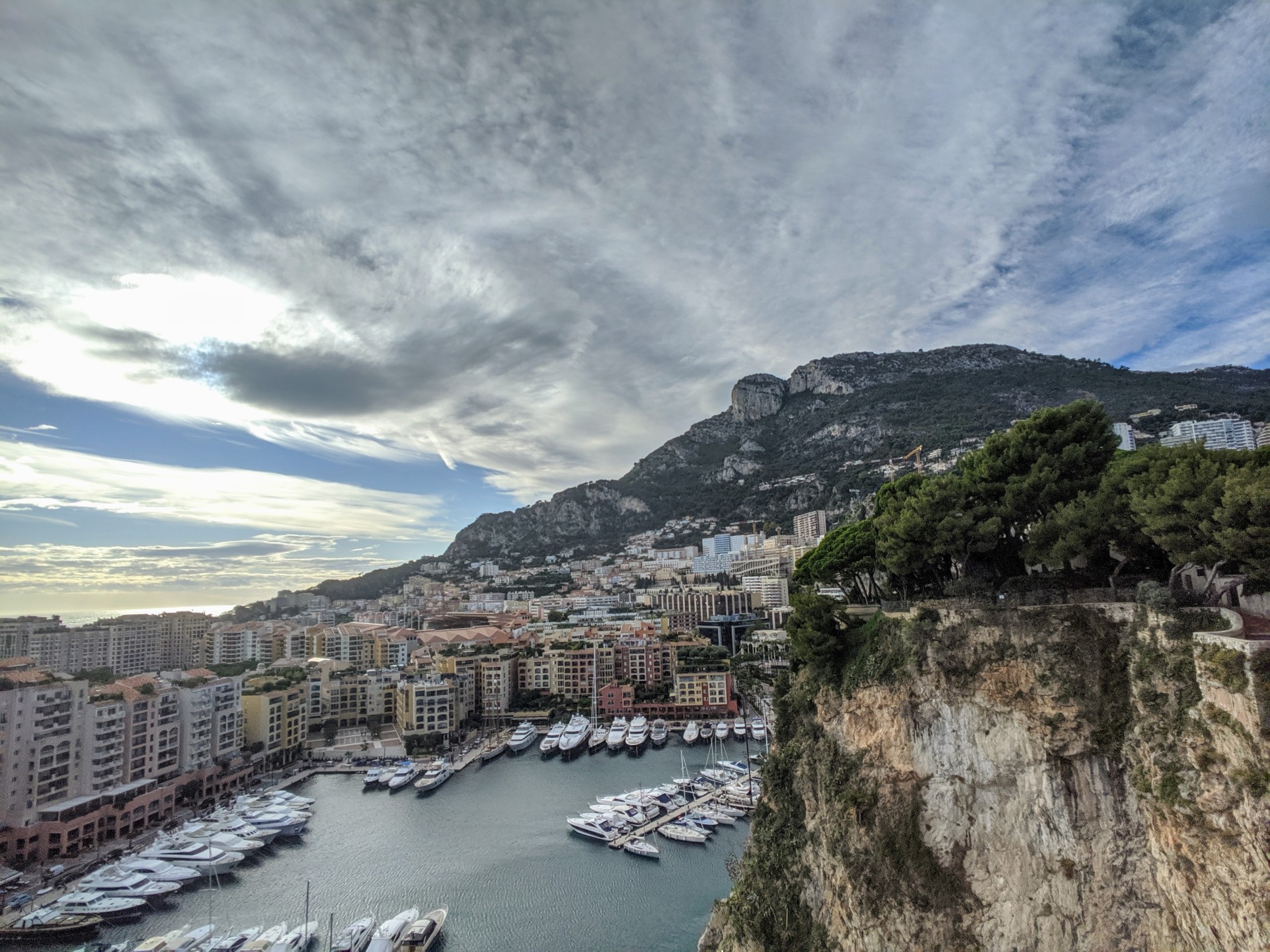 After feeling like we’d exhausted our interest in Monaco, we took the 20 minute train ride back to Nice.

The next day we decided to walk to Old Nice and climb the stairs to the Great Panorama Nice and Castle Hill park. The views were simply stunning- we spent quite a bit of time appreciating the scene of Nice’s coastal buildings and boardwalk set against the aquamarine waters of the French Riviera. 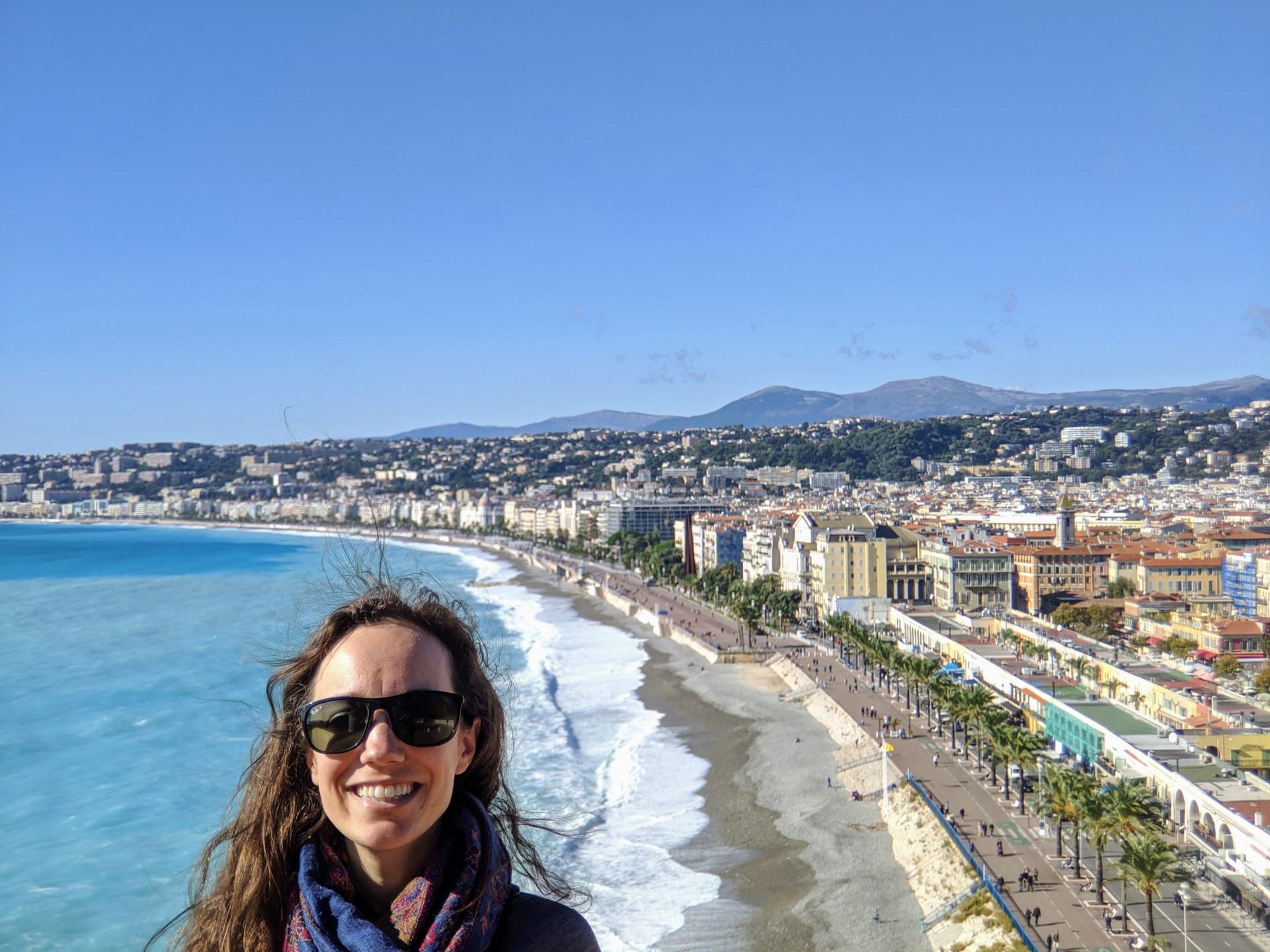 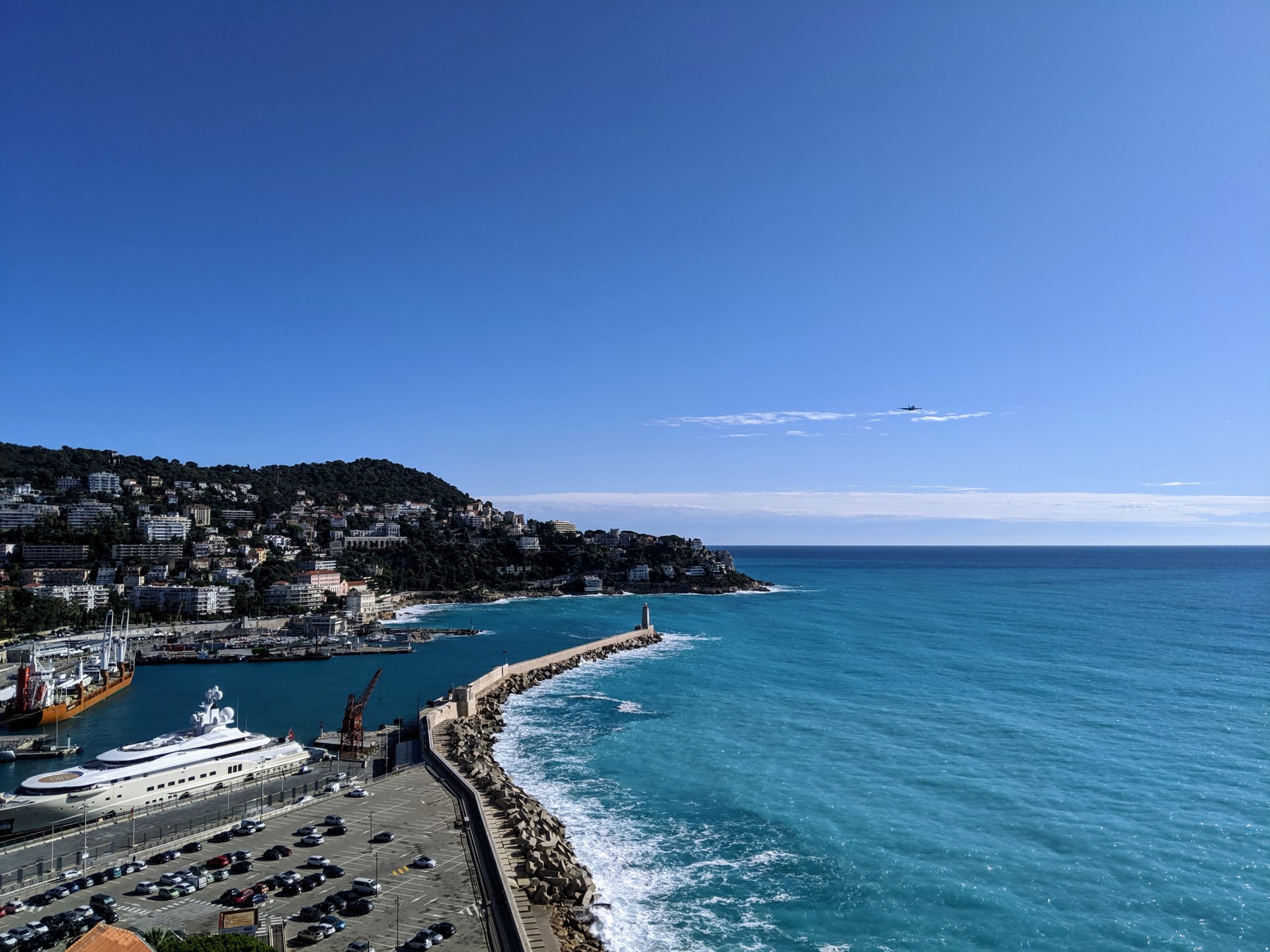 Before long, we realized we had to get going as it was our final day in Nice. Unfortunately we ran out of time to visit the museums, but we had no regrets as we’d thoroughly enjoyed our relaxing and scenic time in the French Riviera. 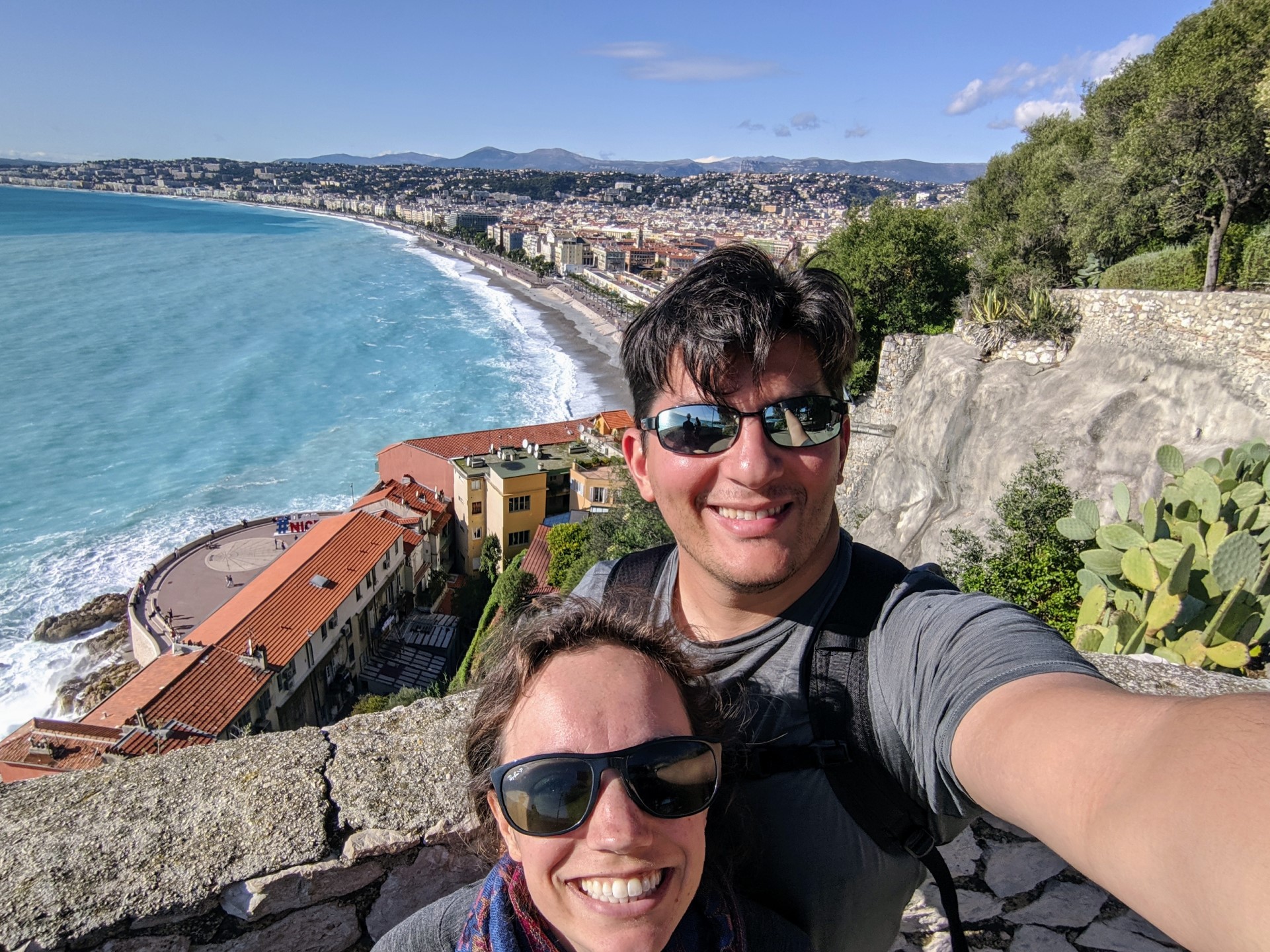 We found some fantastic Vietnamese food which left us kicking ourselves for not thinking of that idea sooner. We could have been eating great Vietnamese food our entire time in France had we taken a moment to realize that as a former French colony, there had probably been plenty of emigration from Vietnam to France.

We boarded the train in the late afternoon and began our journey to Marseille, where we’d be staying at a hotel by the airport in order to catch our flight to Portugal early the next morning.

The French Riviera is beautiful, but the truth is that we can find great beaches (with better sand) back home. I feel like I got a pretty good sense of the place, and while I wouldn’t mind going back, I don’t have any pressing need to do so.

Despite the water being incredibly beautiful, the beach in Nice wasn’t anything that would bring me back from Southern California. I think if we do make it back to the area it would be to explore Provence.

Conclusion: Once Was Enough