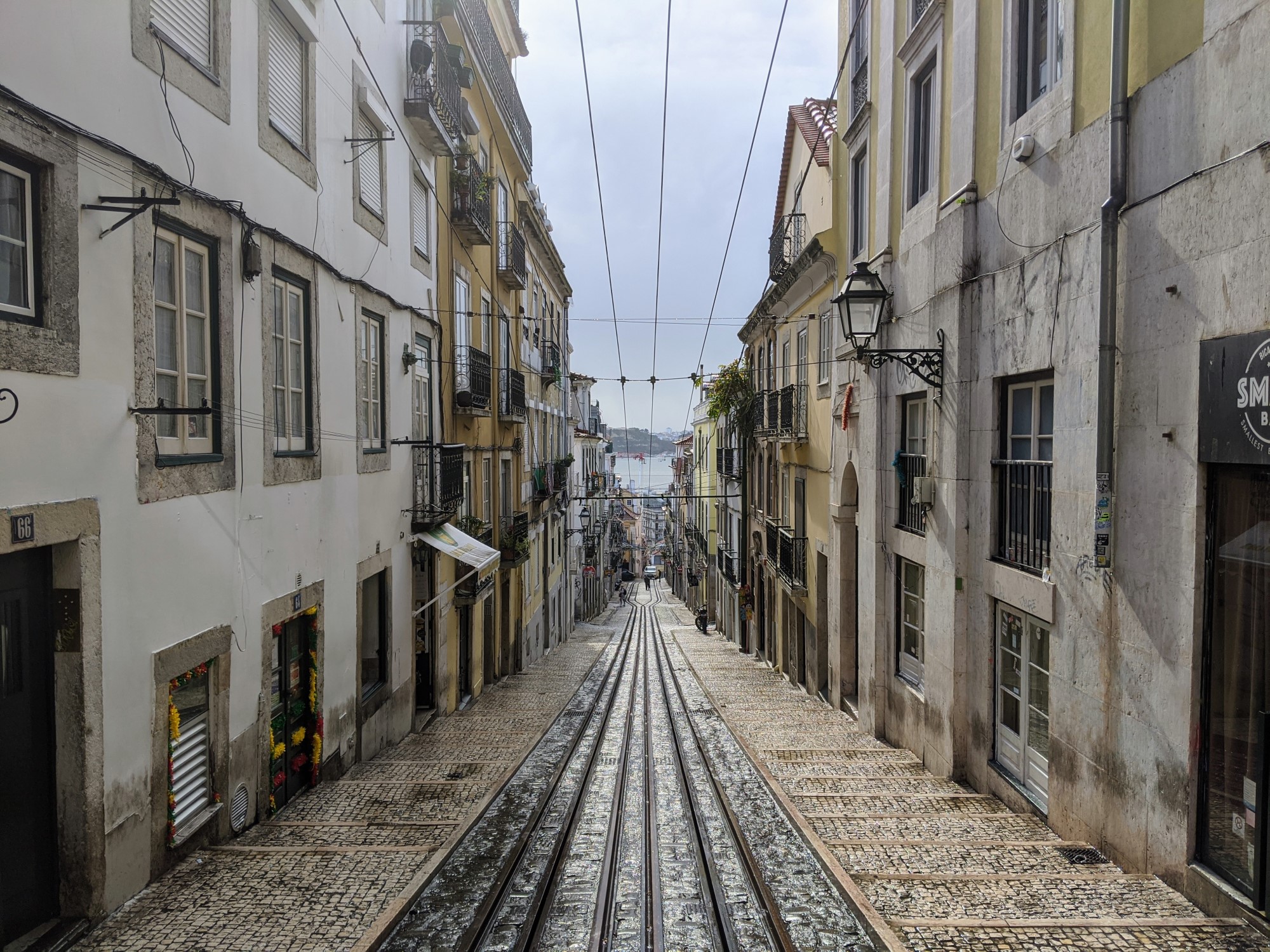 Rather than risking another unpleasant night train all the way from France to Portugal, we opted to take a cheap RyanAir flight from Marseilles to Lisbon. After grabbing a bite to eat and settling in at our Airbnb, we busted out the Rick Steves Europe app, and began the audio tour for Lisbon. It began at the enormous Praça do Comércio... 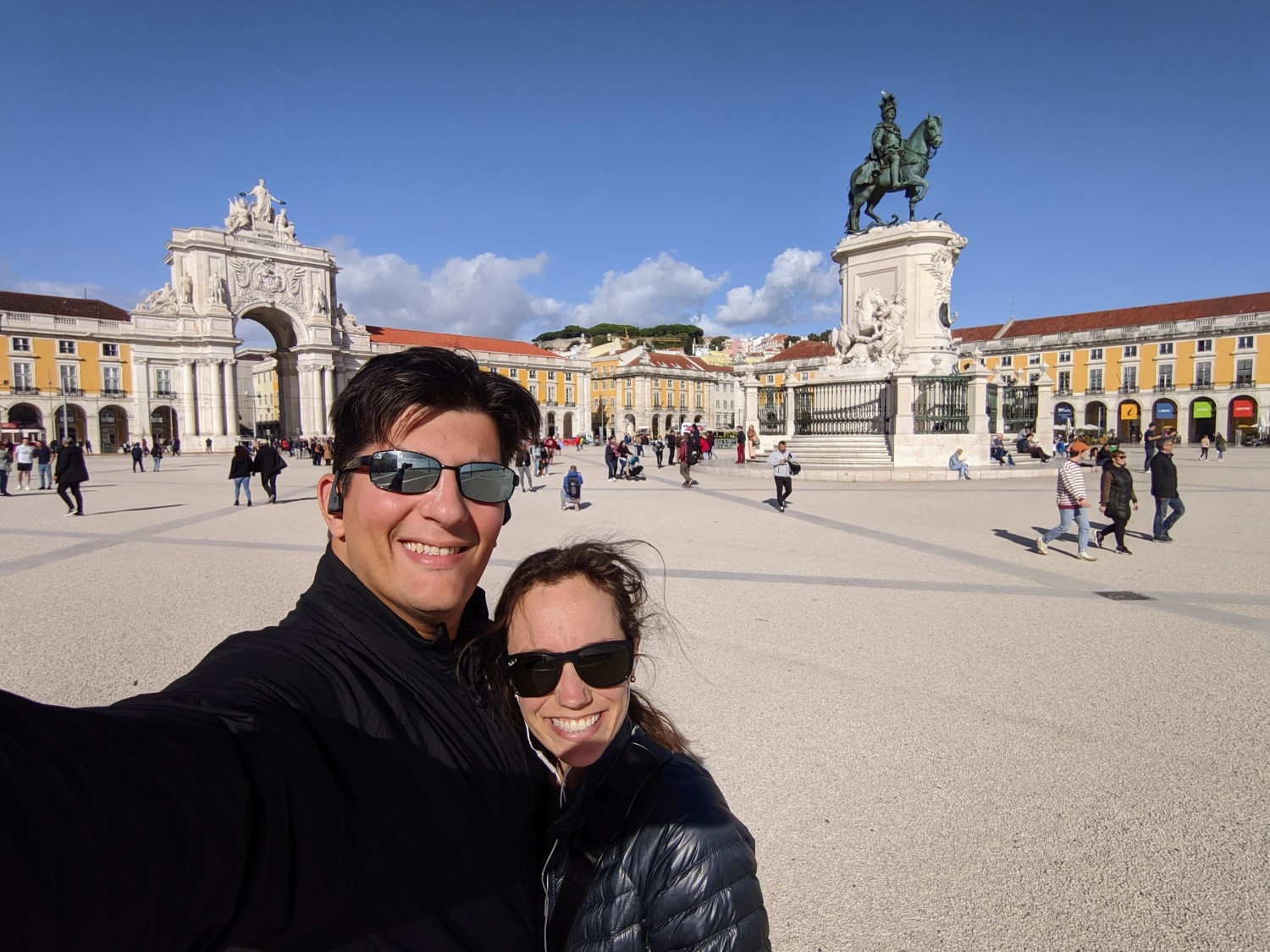 ...and continued along a scenic pedestrian path through the middle of the city. It was love at first sight! We admired the beautiful black and white paving stones set up in unique patterns and colorful tiles covering many buildings. 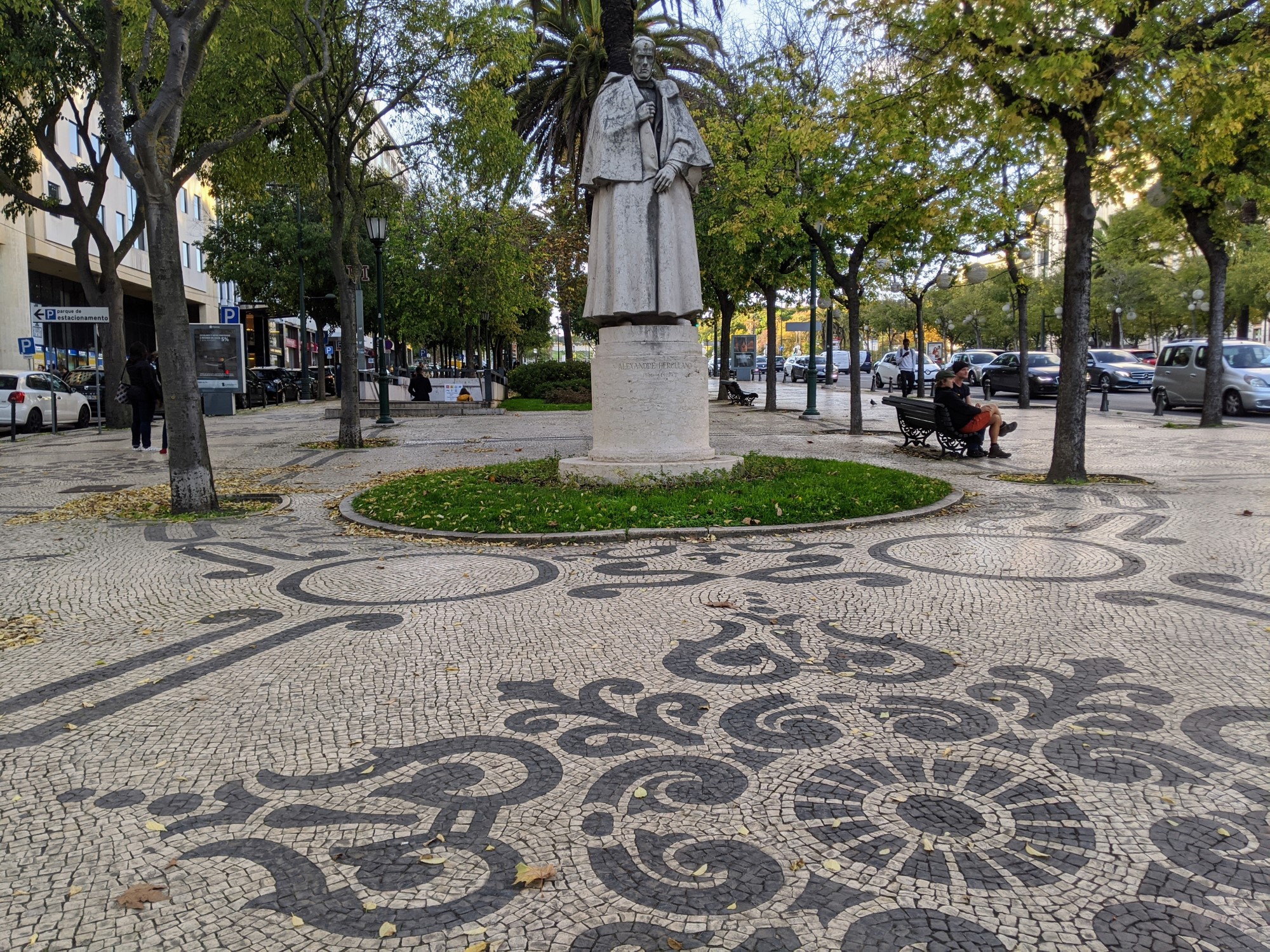 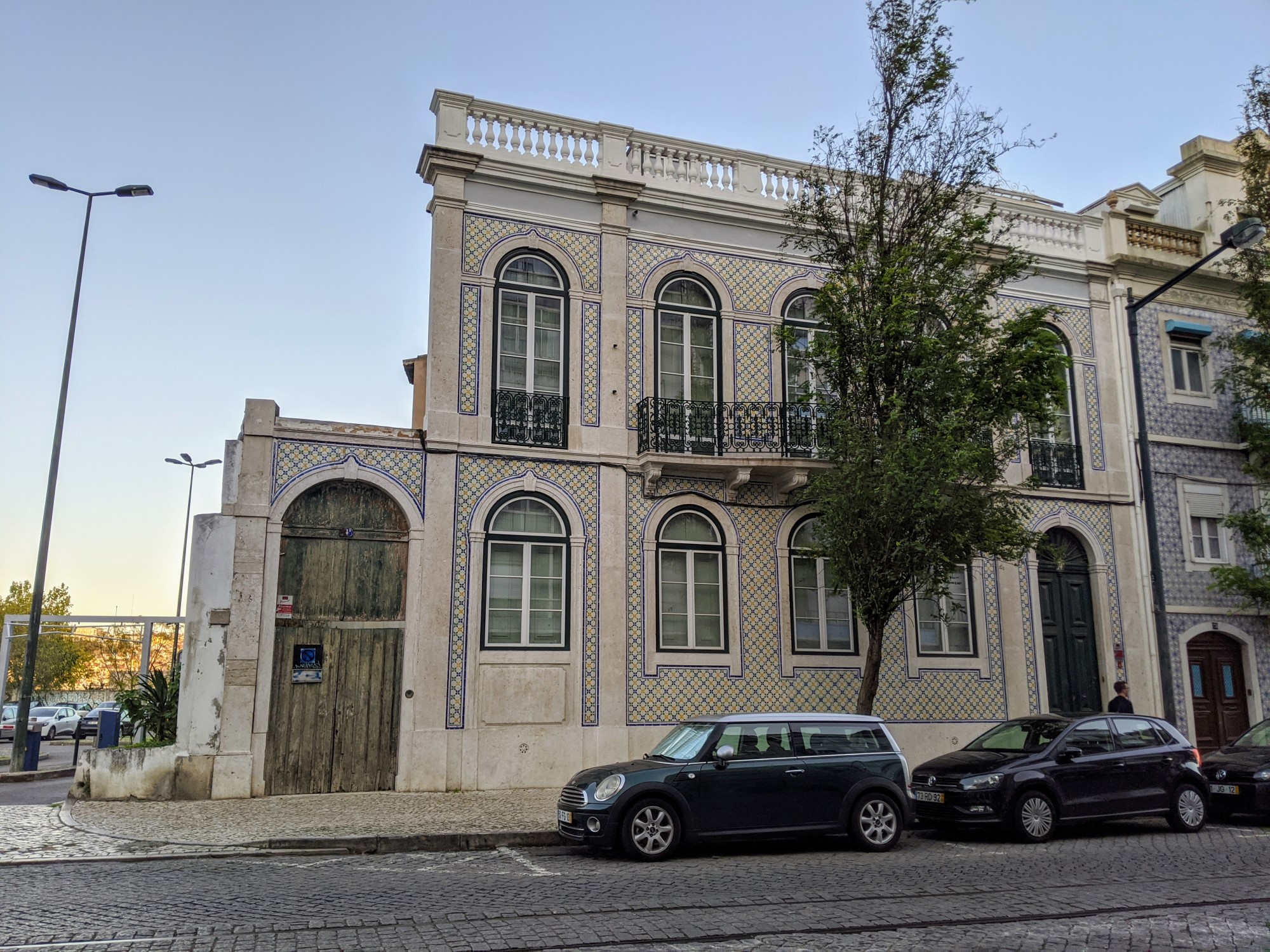 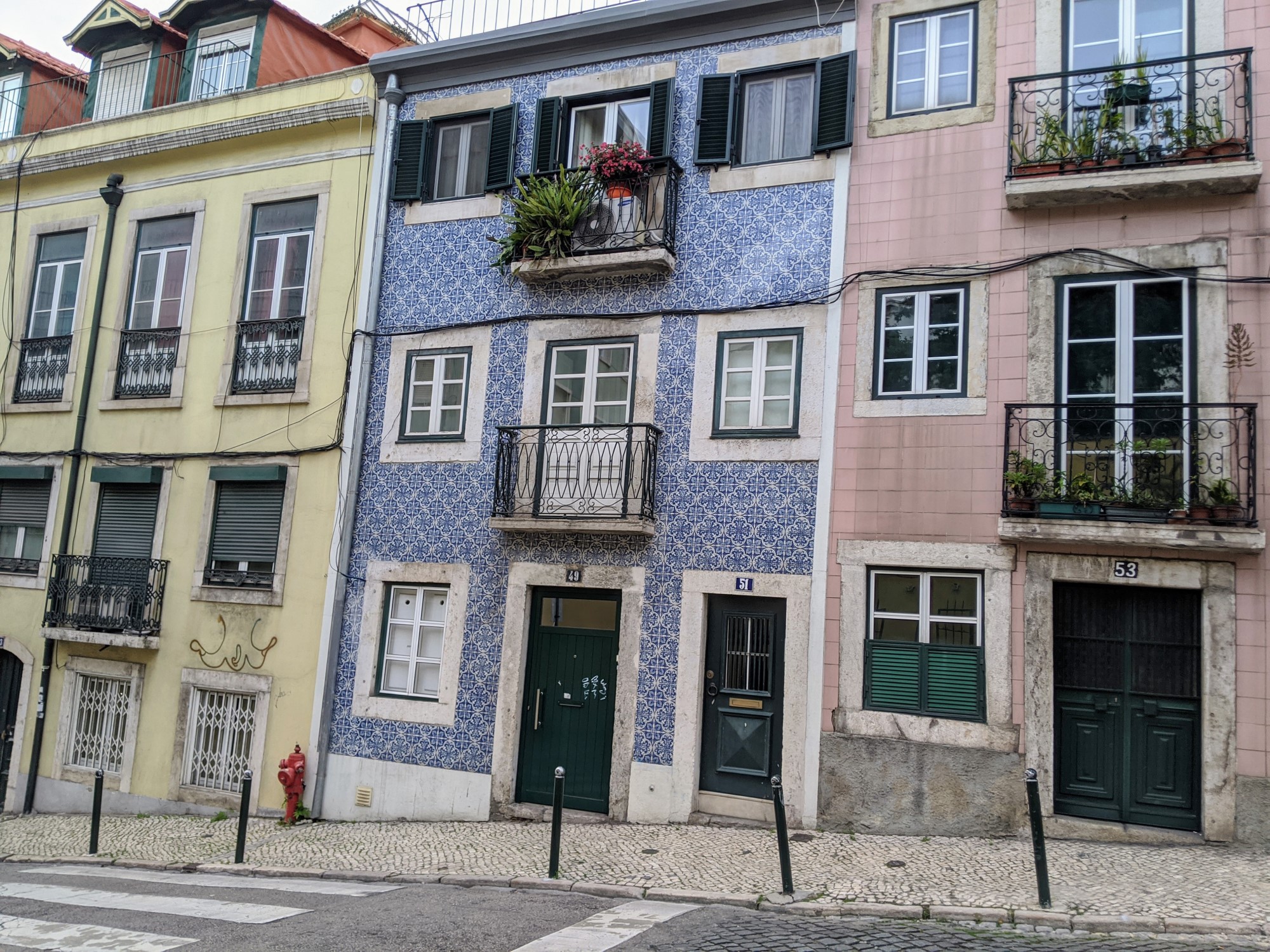 We also came upon the memorial to the victims of the Inquisition that sadly did not appear to be well maintained. Unfortunately I didn't take the best picture of it, but you can see there are three burns on the memorial. We were also shocked that a tour guide next to us kept resting her foot on the memorial as she explained the Inquisition to her group. On a separate note, it felt strange as Jews to be in a city with such a violent anti-Jewish history and almost all traces of its Jewish history erased. 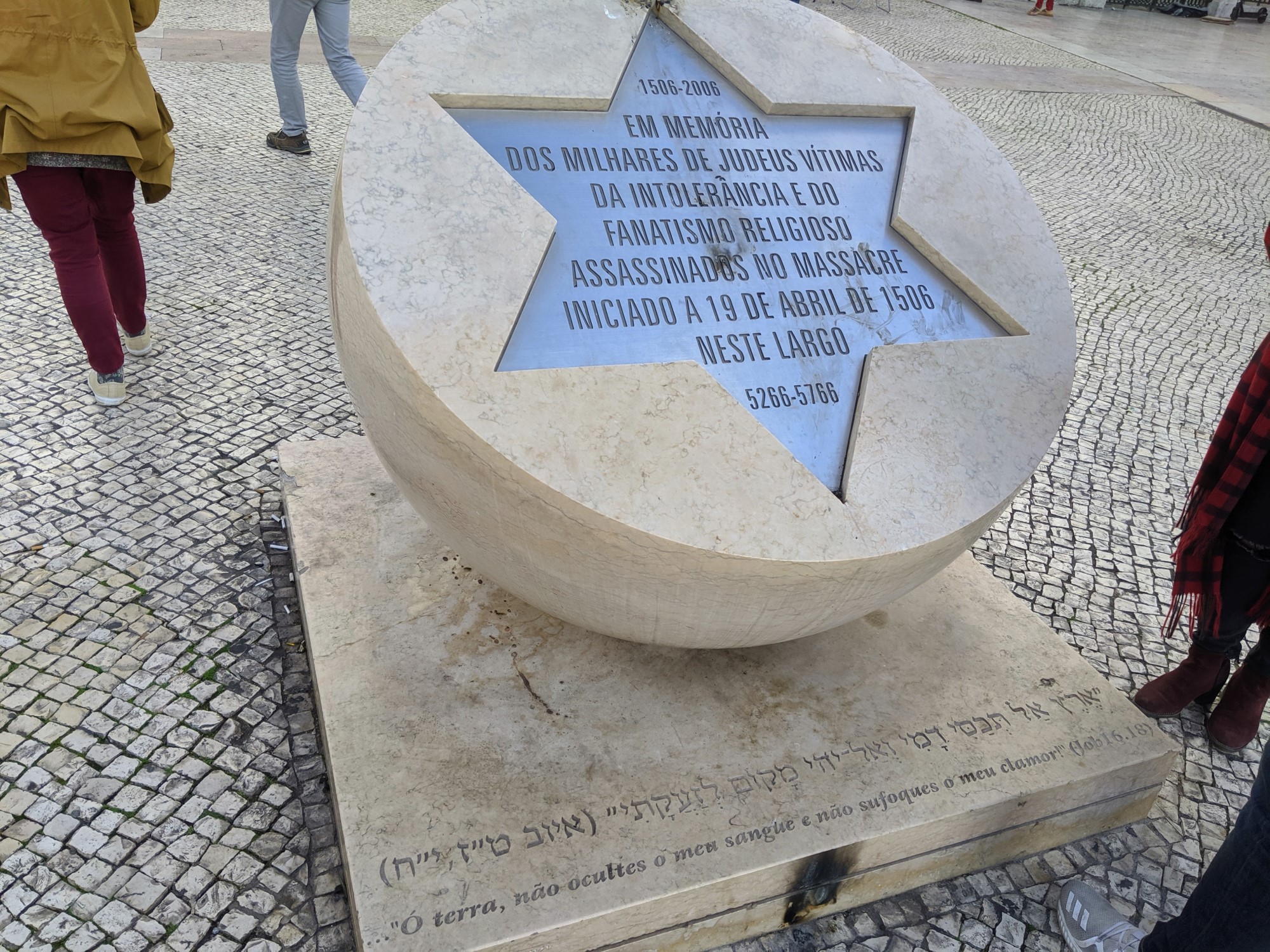 The Rick Steves tour also brought us to the Rossio subway station built with an eye-catching architectural style that we learned is referred to as Neo-Manueline. The empty space between the doors was for a 126 year-old statue that was destroyed by a student who climbed up to take a picture with it in 2016. 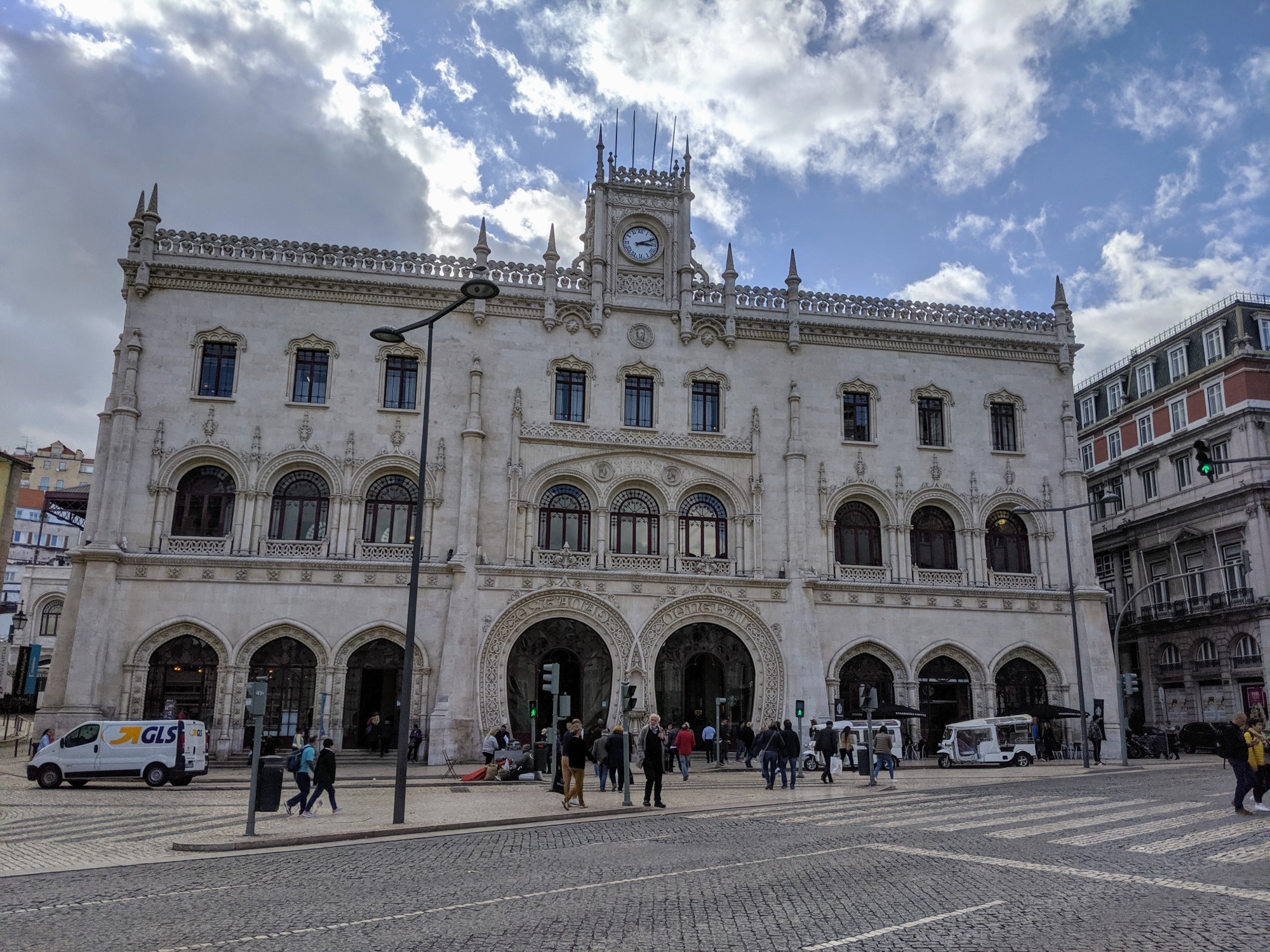 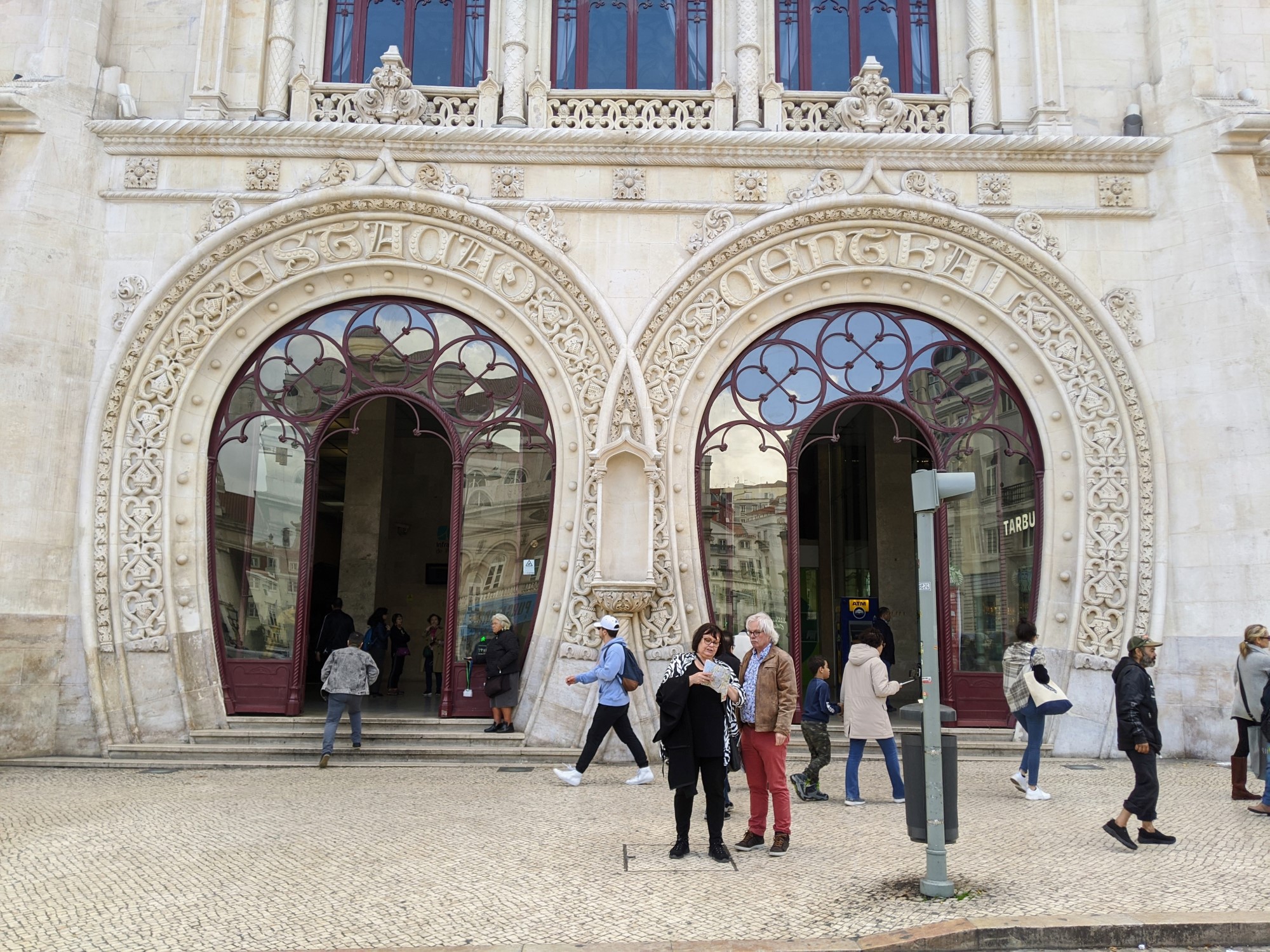 There is almost no evidence of the earthquake in 1755 that destroyed the city, except at the Convento do Carmo. Here they didn’t rebuild but rather left the convent nearly untouched. 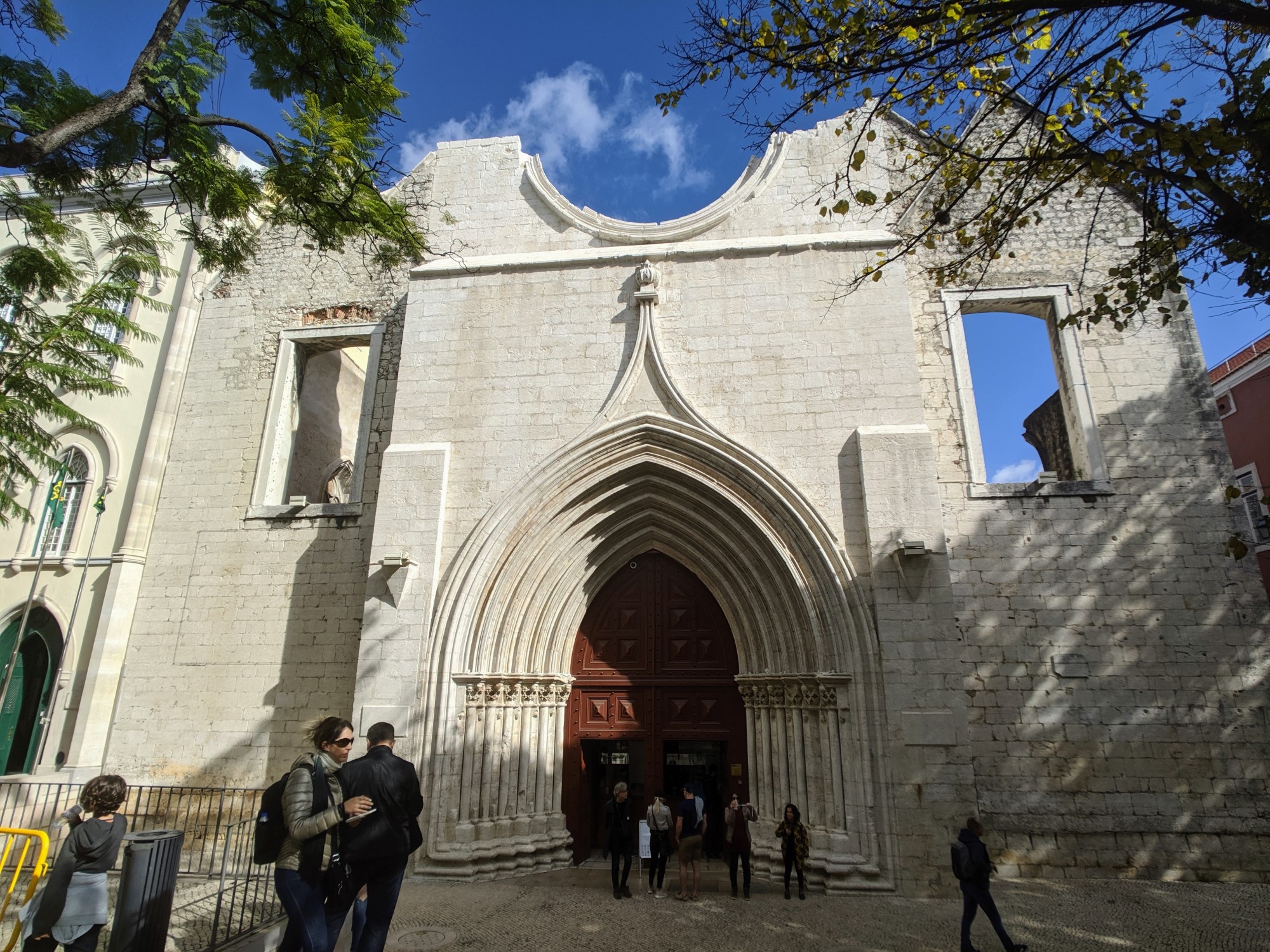 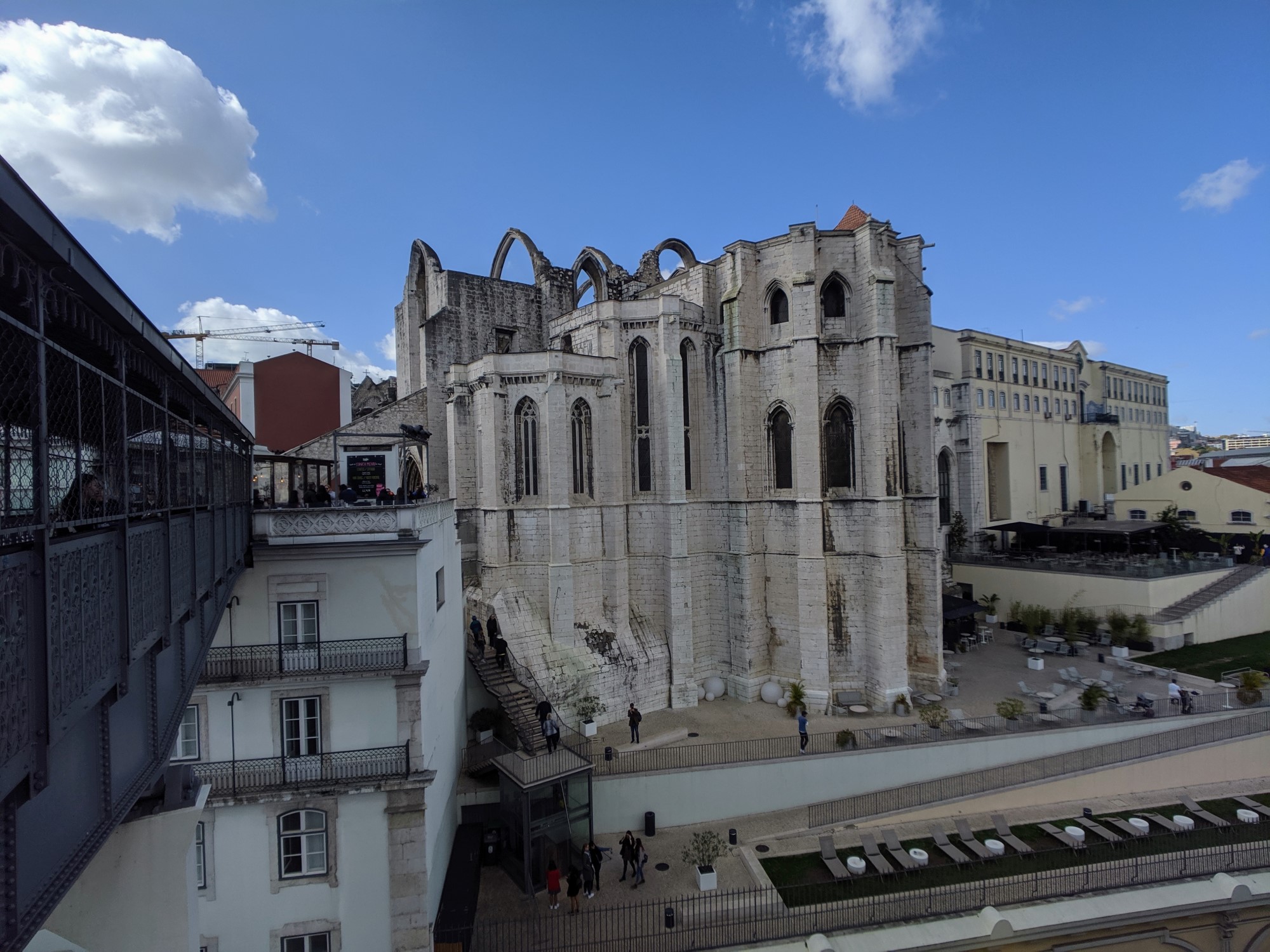 Today it’s possible to enter with a small fee, but the destruction is notable even from the outside. This earthquake had a magnitude of 8.5-9.0 and occurred the morning of All Saints Day. Those that survived the earthquake were then left to contend with horrific fires caused by the plethora of holy day candles knocked about as the earth shook. While dealing with said fires, the city was then hit by a 20-foot tsunami caused by the earthquake. I read somewhere that the survivors fled the city thinking that the world had ended. Due to this tragedy, Lisbon had the unique opportunity to rebuild from scratch, in contrast to many other large, aged European cities that have been forced to retrofit in order to stay modern over the centuries. 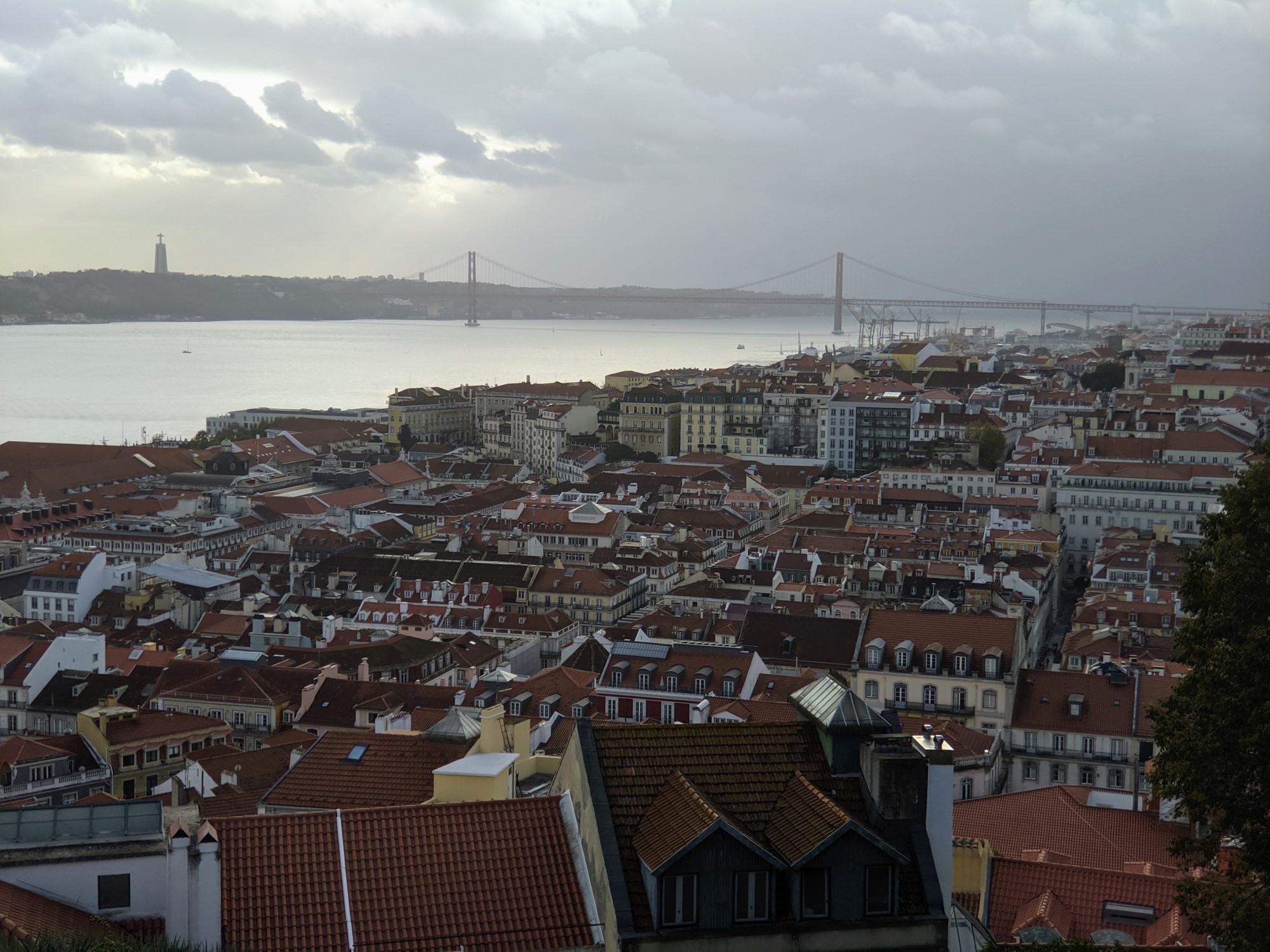 We were able to find several great vistas of the city to enjoy the view. Later on we visited the 11th century Moorish Castle of San Jorge, which was surprisingly accessible- There were very few guard rails or even railings for stairs. As Americans, we are always surprised to find a lack of safety/accessibility equipment installed abroad. 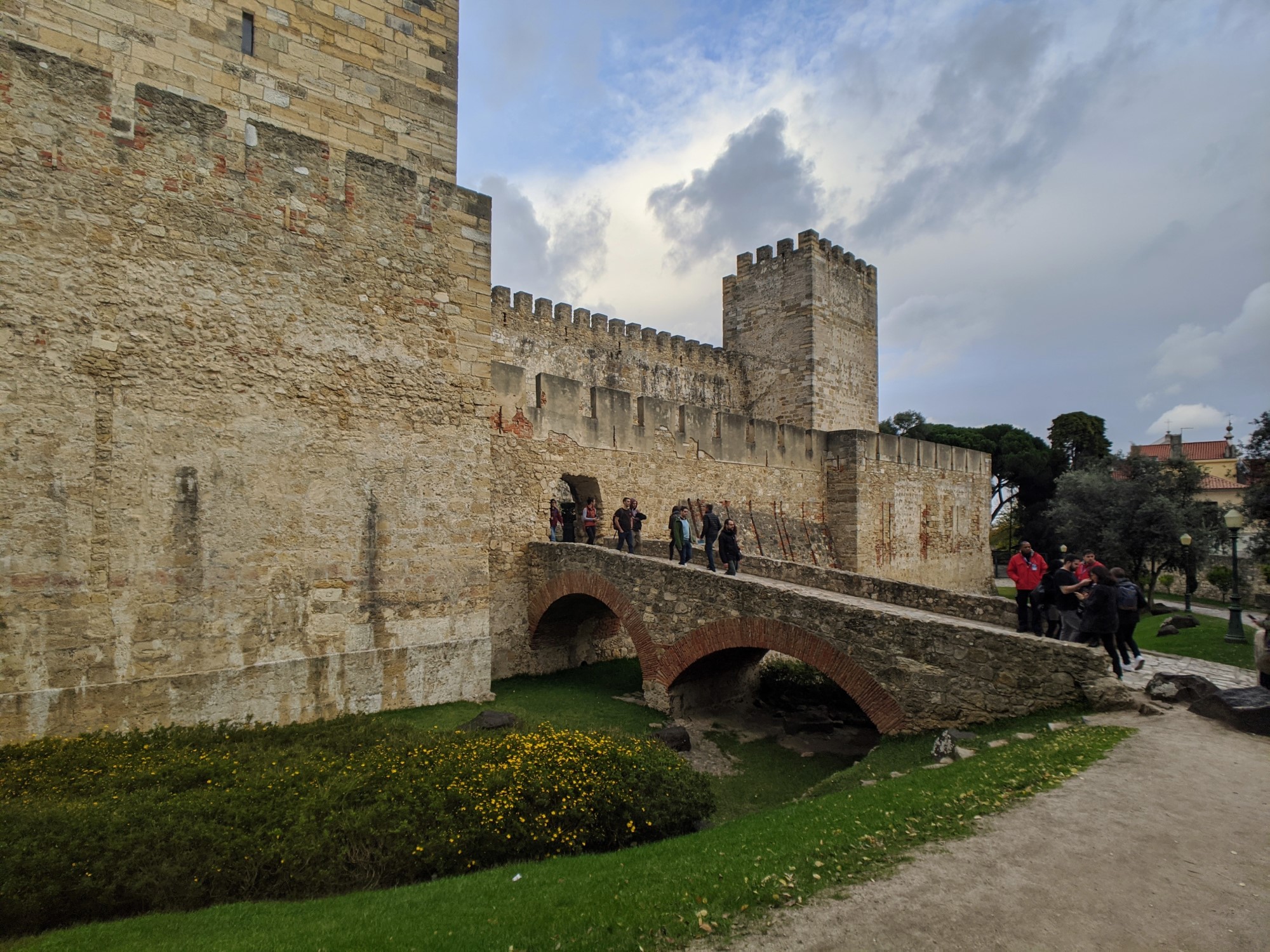 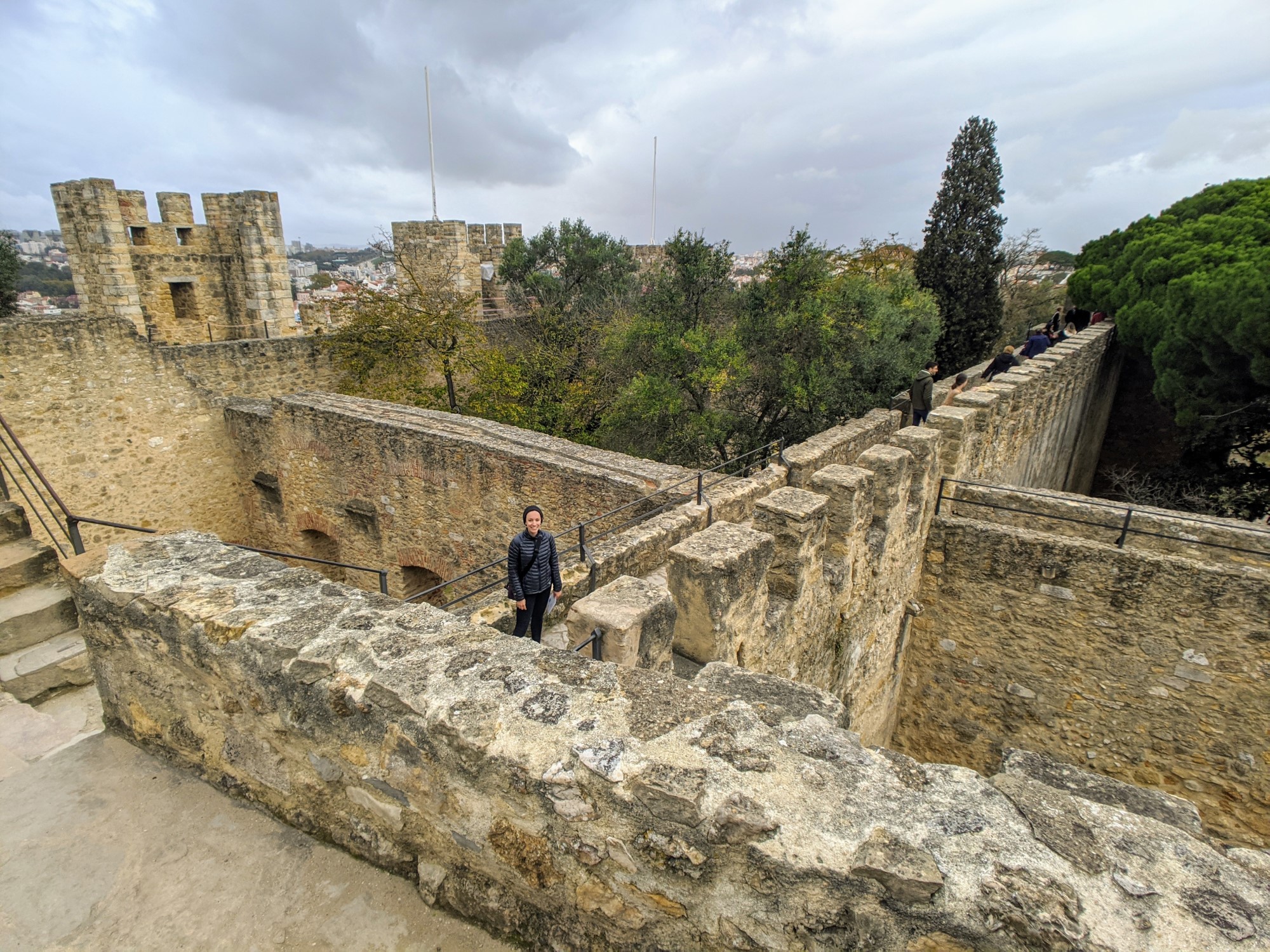 At this point the sunset was fast approaching along with wind and rain clouds, so we headed back to the Airbnb to regroup.

The next day we took a train to Sintra, a hilltop town home to several castles, gardens, and palaces. This area was where the Portugese royal family spent time outside of Lisbon, and therefore attracted wealthy families who were (or wanted to be) close to royalty. We only had time to spend one day here, so we chose to visit the Pena Palace. The vibrant, contrasting colors helped to brighten up our otherwise cloudy/rainy day. 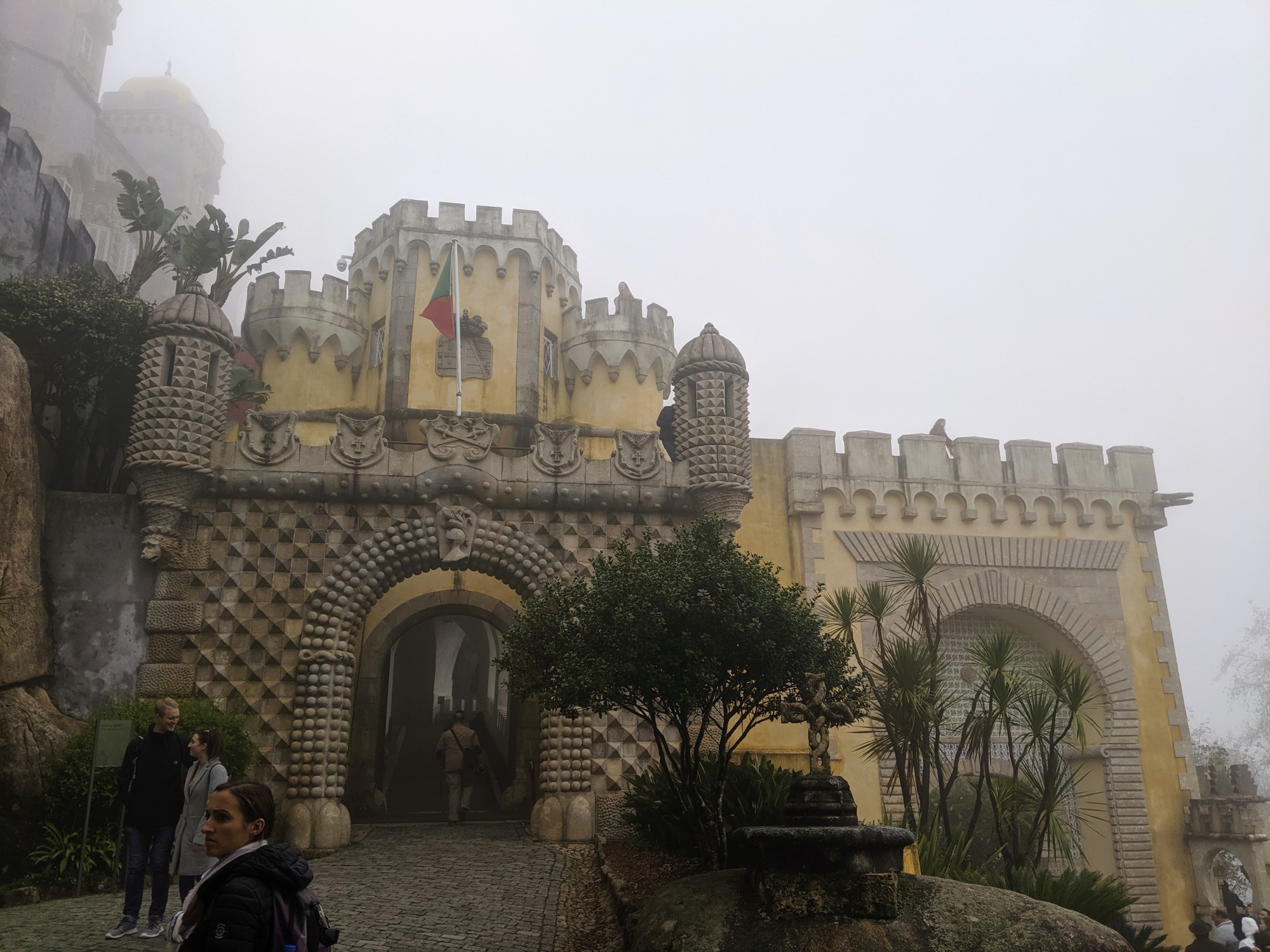 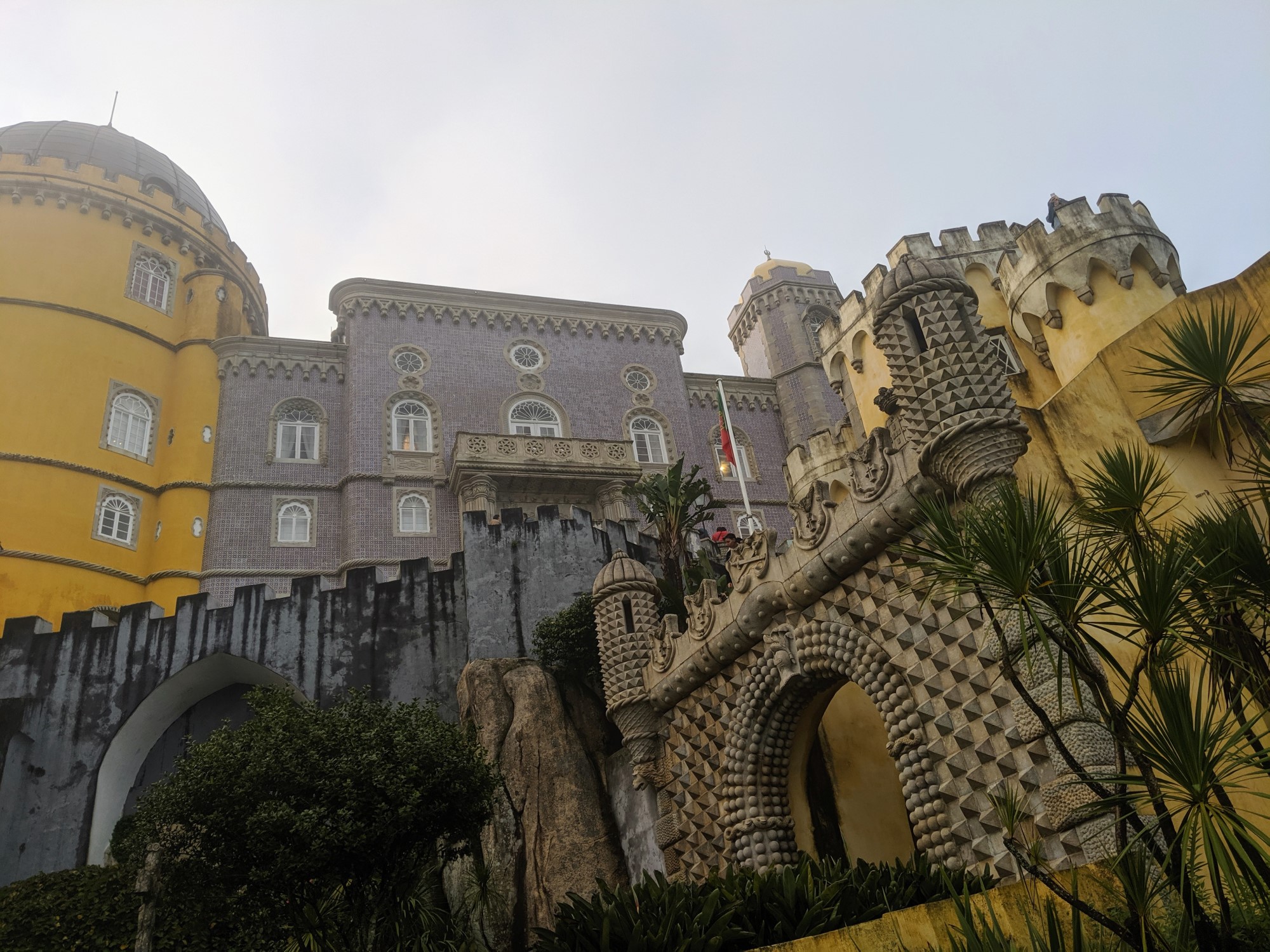 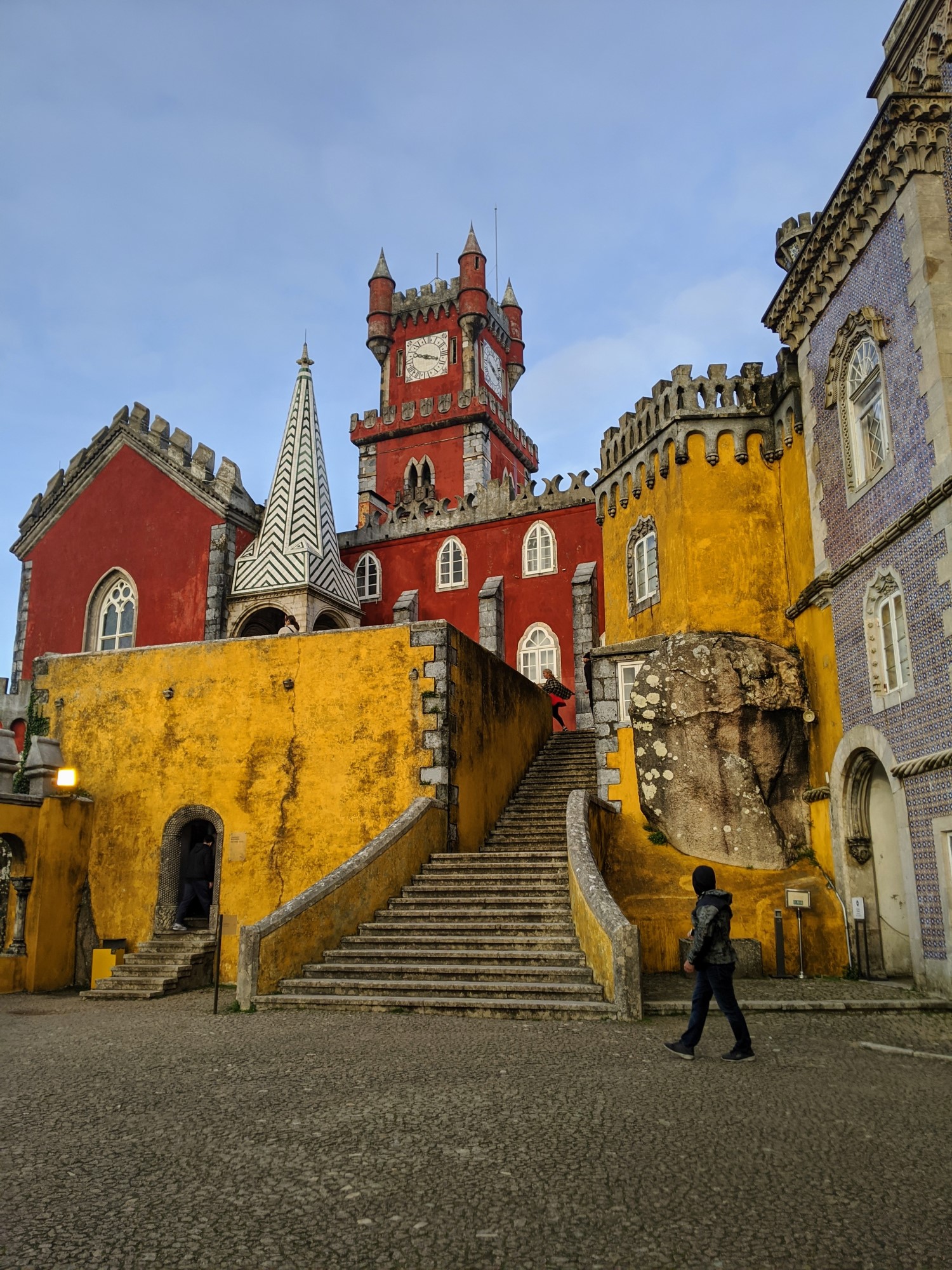 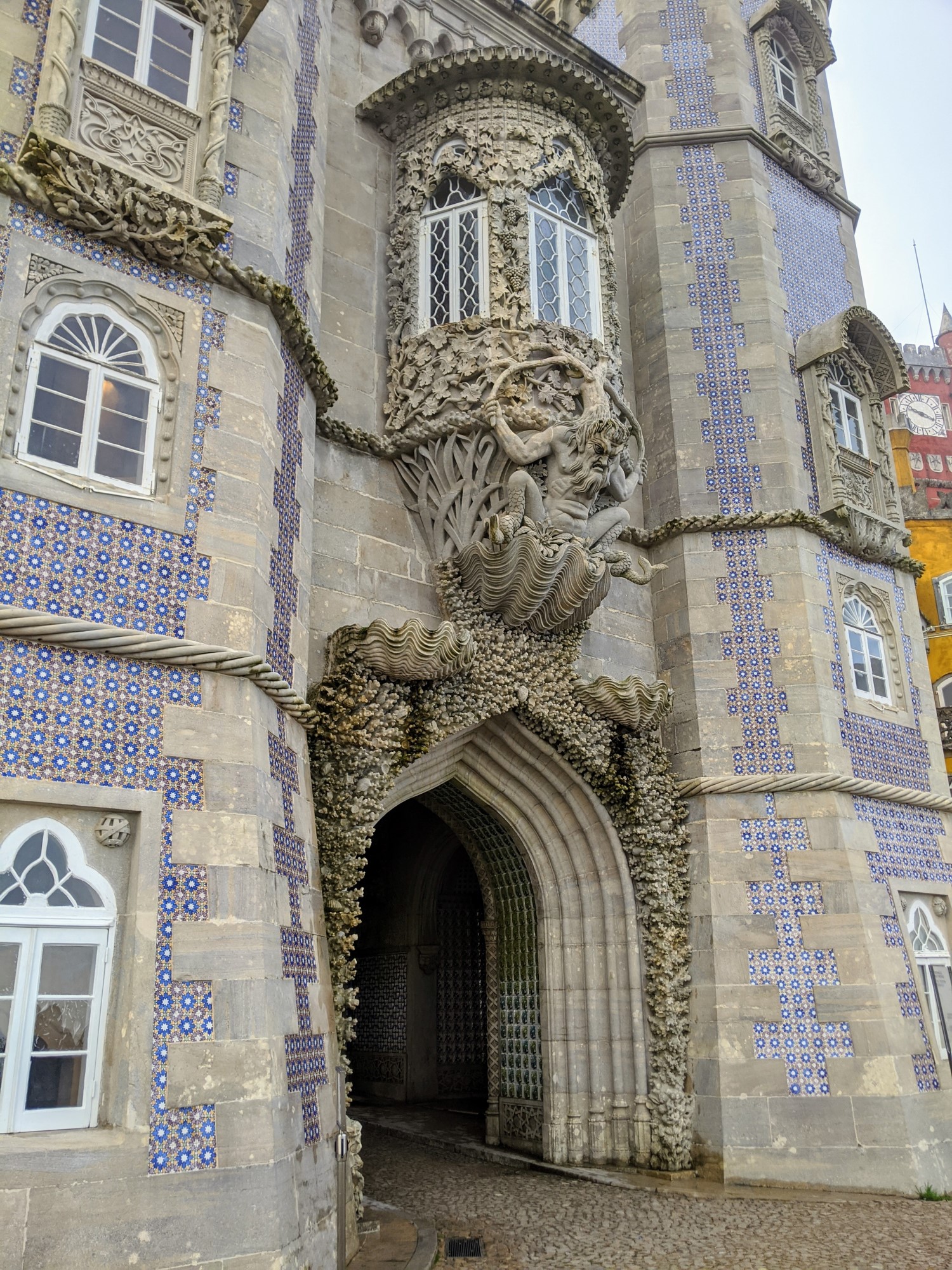 The level of detail was astounding and we loved seeing the different styles of the exterior. We wished we had more time to explore this area, as it was full of nature parks and other interesting sites. We caught a glimpse of the Sintra National Palace as we descended the hill back to the train. 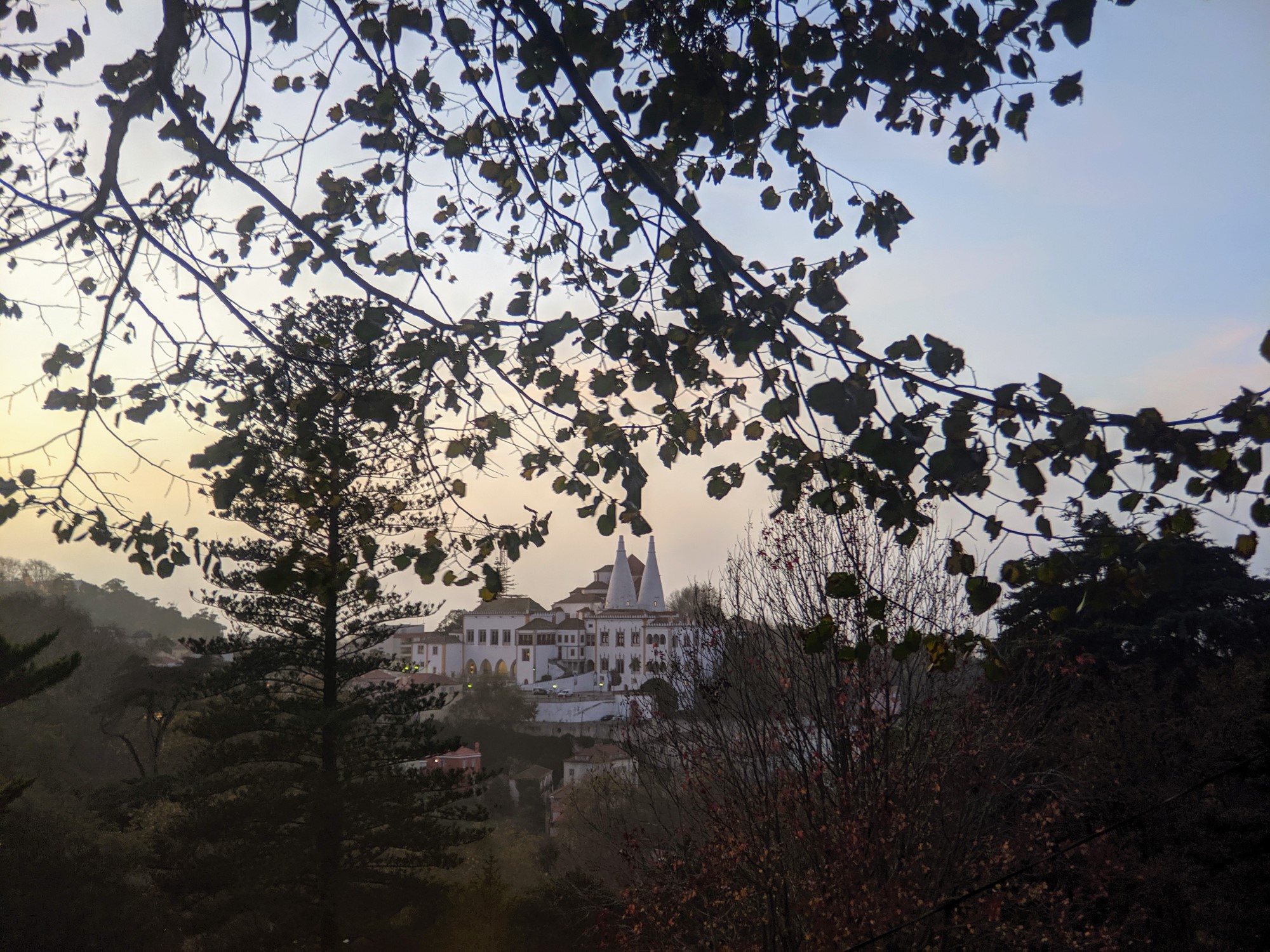 On our last day in Lisbon, we walked to the area called Belem, about 45 minutes west of central Lisbon. The walk took us past the Ponte 25 de Abril (which to us seemed to be the Portugese equivalent of the Golden Gate Bridge) and the Museum of Art, Architecture, and Technology- also known as MAAT. Walking by MAAT was an interesting experience as the building is designed to echo the sound of the river, so that as you go by you can hear the waves in stereo above you. It was a really cool effect that we stumbled upon by chance. 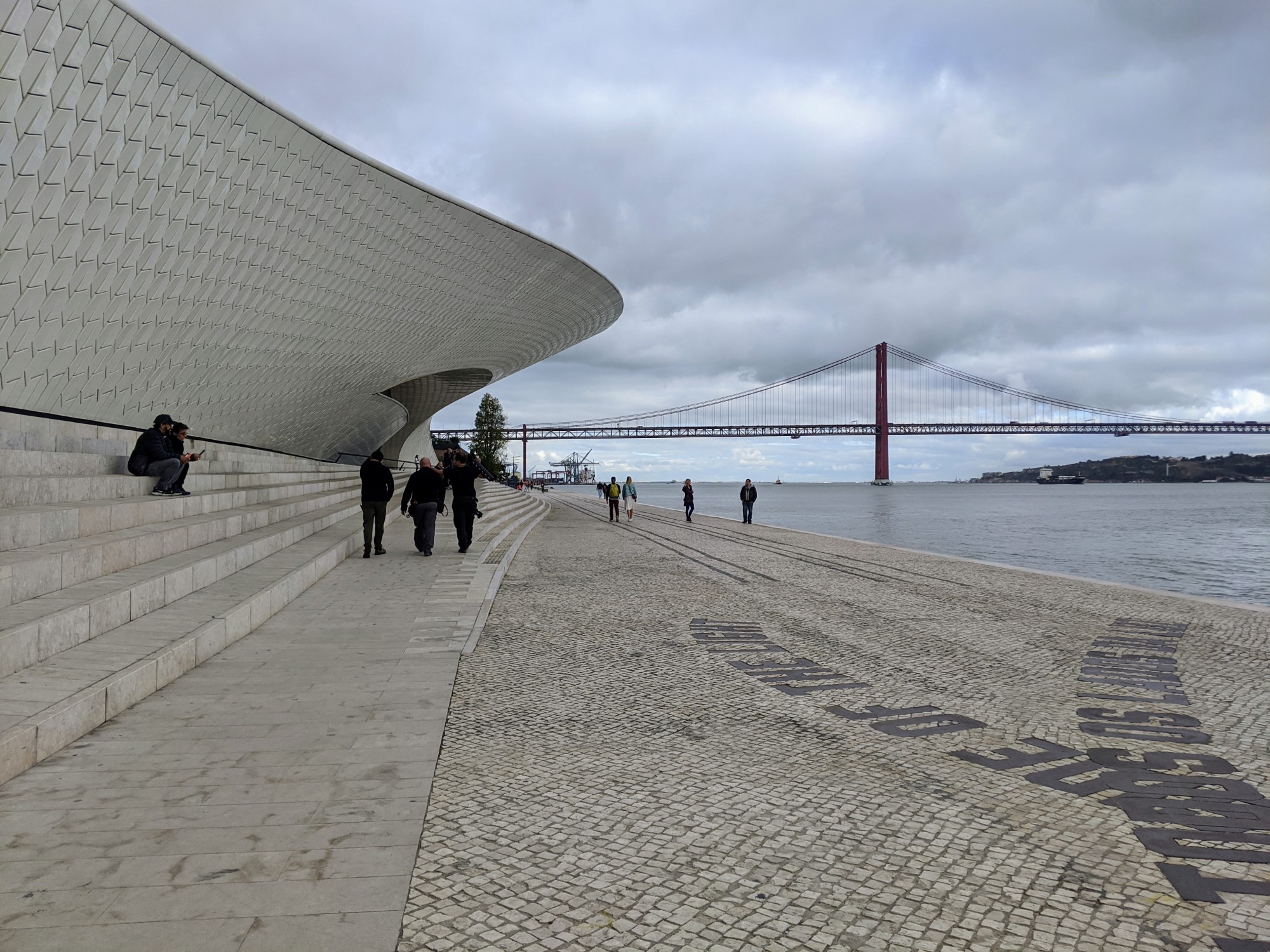 Continuing on our walk, we found the gigantic Monument of Discoveries. This is a beautiful, highly symbolic tribute to Portugal’s Age of Discovery in the 15th and 16th centuries. 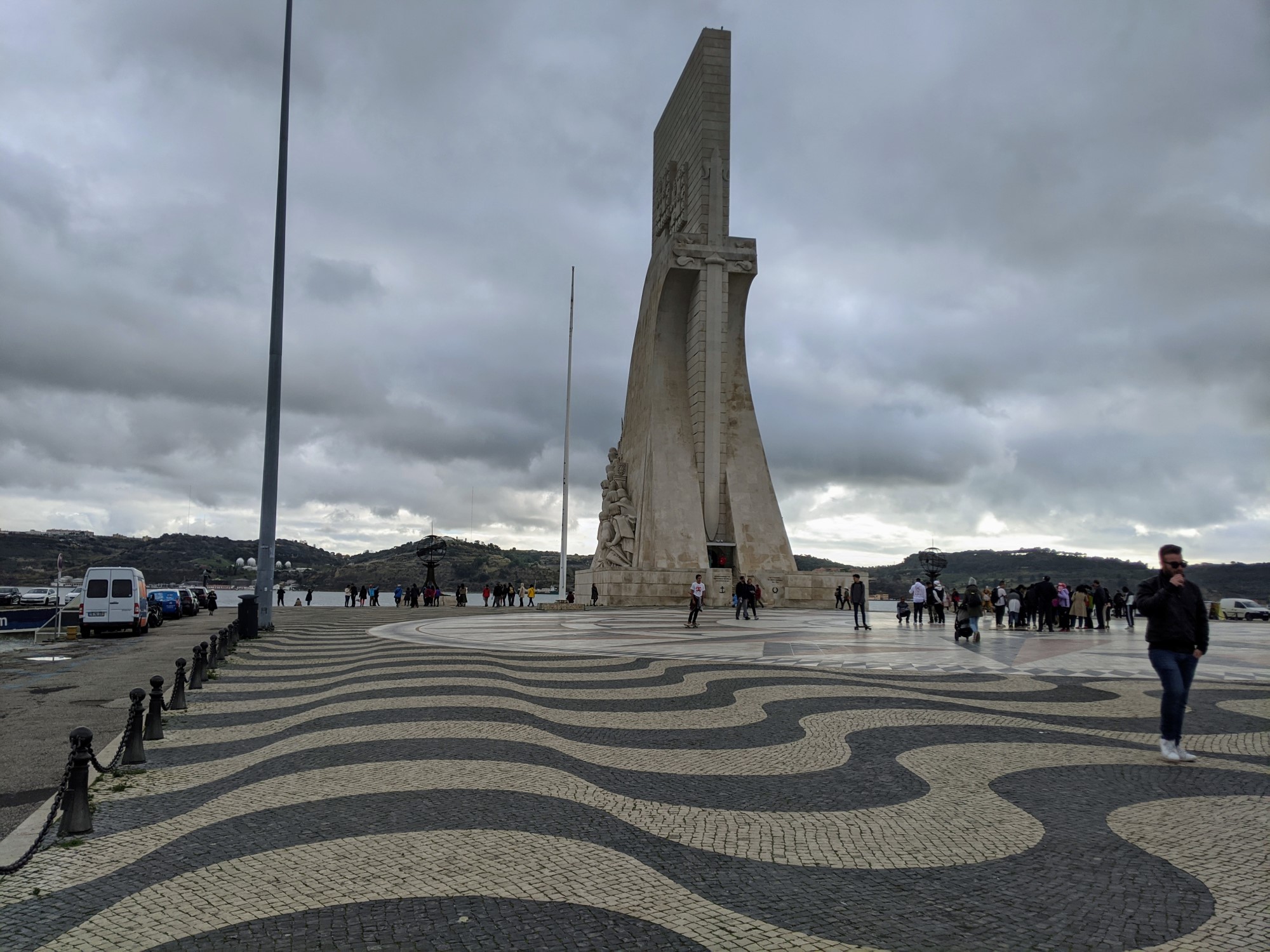 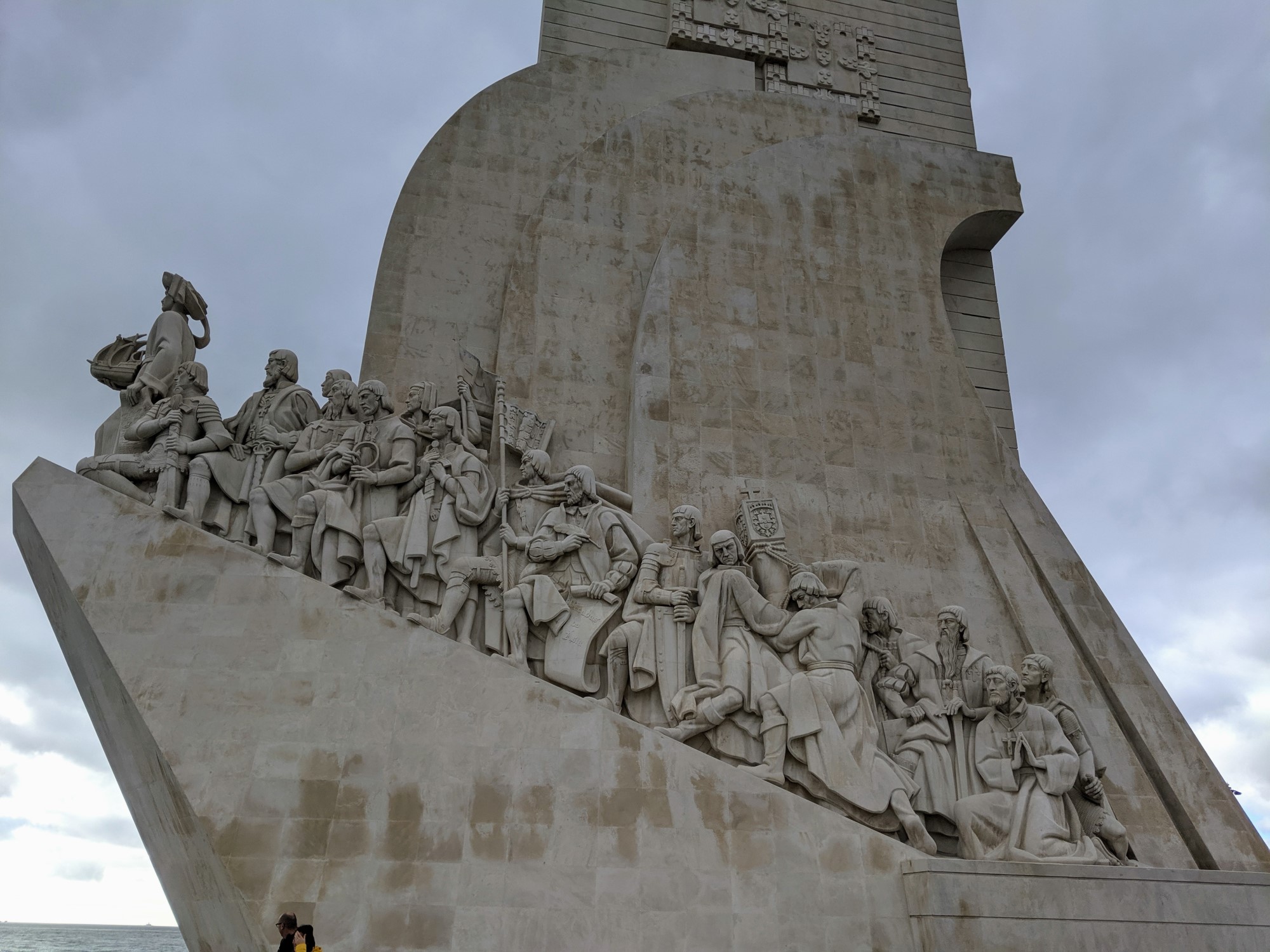 Last but not least, we finished our walk at Belem Tower. The Belem Tower was a military fortification built in the early 1500s. It is possible to enter, with a fee, but we opted to just enjoy it from the outside. 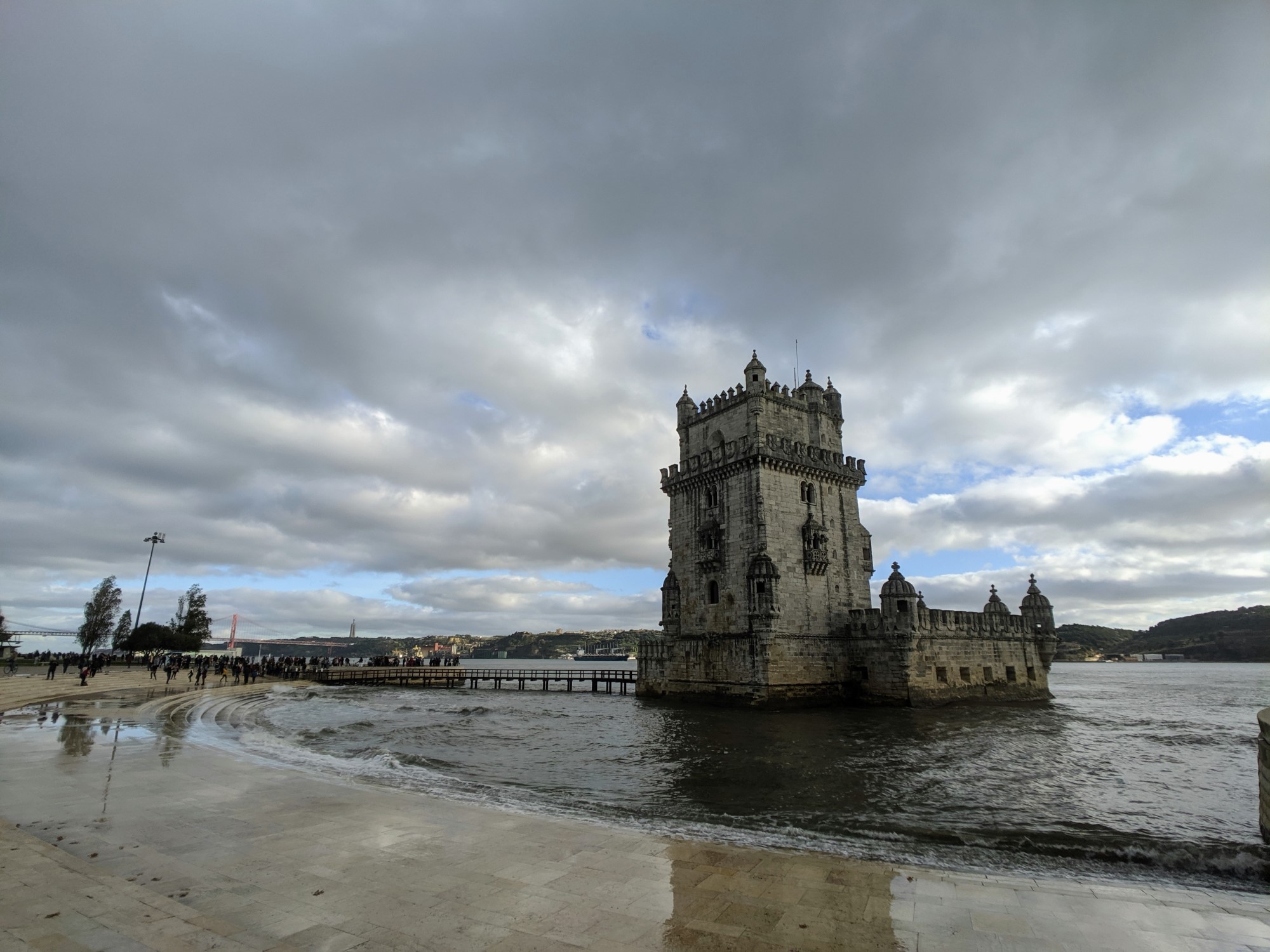 After a long day of walking, we caught a taxi back to the city. We made it just in time to catch the sunset over Lisbon (you can see the San Jorge Castle on the far hill). 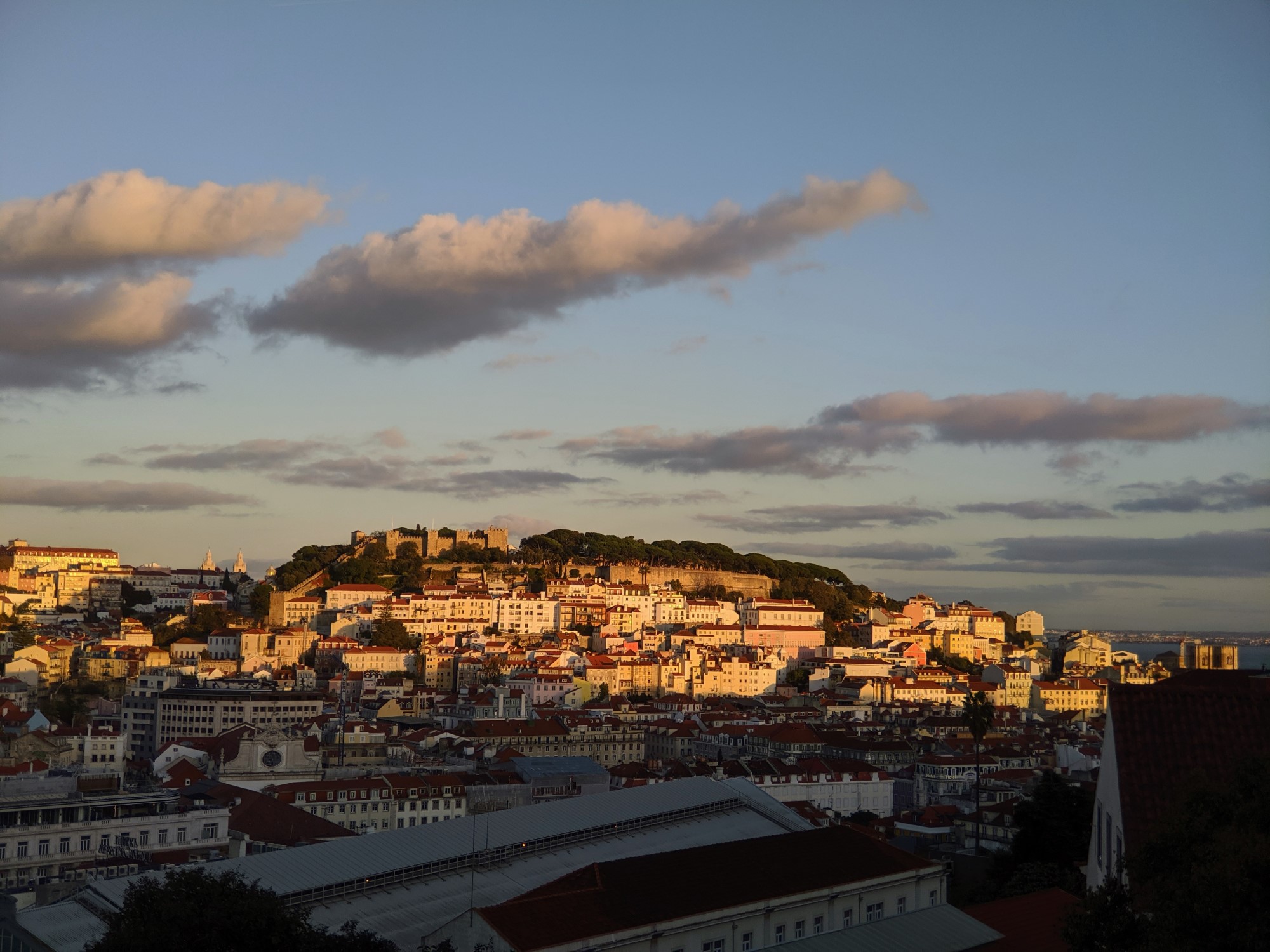 Lisbon surprised us. We honestly didn’t think we would enjoy it as much as we did. The city was interesting and reminded us a bit of San Francisco; having a history of devestating earthquakes, built upon steep hills, with still-functioning historic street cars.

We couldn’t eat much of the local food (pork, shellfish) but there was definitely a foodie scene for those who don’t share our dietary restrictions. The one local food we were able to enjoy was the pastel de nata, mini custard-tarts that were sweet, creamy, and bite-sized.

After zipping around Europe, through many different languages, it was a relief to land in a country where most everyone speaks English as a second language and no one appears to have a bias against non-Portugese speakers. We figured people would rather have Ryan speak in Spanish (as Spanish and Portugese are similar enough to enable understanding between the two) but suprisingly when he offered, “English or Spanish?” the other person 100% of the time opted for English. We actually met a lovely, young Italian woman working at a cafe who, in her words, had minimal interest in speaking or learning Portugese despite having lived there for four years. I don’t think this would be a successful strategy in any country other than Portugal.

We had almost skipped out on Portugal entirely to focus our time in Spain, but we’re so glad it stayed on the itinerary! We look forward to exploring more of Portugal in the future, and we strongly recommend this wonderful country to those looking for more of an “off the beaten path” European adventure.

Luckily for us, we weren’t leaving Portugal just yet! After one week in Lisbon we headed north to the city of Porto.

Lisbon surprised me and ended up one of my favorite cities in Europe. There’s so much to see and do there, but even if all you’re doing is hanging out and enjoying the city, you don’t want to leave. Of course there are plenty of day trips to be taken in the surrounding area and I would love to go back and see more. Portugal as a whole has earned its place high on my list of European destinations.

Lisbon and Sintra were beautiful and we enjoyed our week here, but I don’t feel the need to come back anytime soon. (Spoiler alert: I liked Porto better 😶)

Conclusion: Depends Who You Ask