The Atacama desert is one of the driest places on Earth, second only to Antarctica. It also exists at an extremely high elevation (which is part of the reason for the minimal moisture).

San Pedro de Atacama was suggested as one of the top places to visit in Chile. As with much of our trip, we didn’t have much of a plan once we arrived. We found a quaint Airbnb the week before we were set to arrive.

The town itself looked like what you’d expect an old timey Mexican town to look like in a movie; lots of adobe and mud construction, dirt roads, etc.

Unfortunately the only picture I took in town was of us waiting in line for gas. That station is the only gas station in over 100 miles, which for some unfathomable reason is in the dead center of town, down what is effectively a one way road. The line pictured below was around 10 AM (we had about 7 cars ahead of us). We had attempted to get fuel the night before, but I estimate it would have taken close to an hour and a half, as the line spiraled out from the center of town. 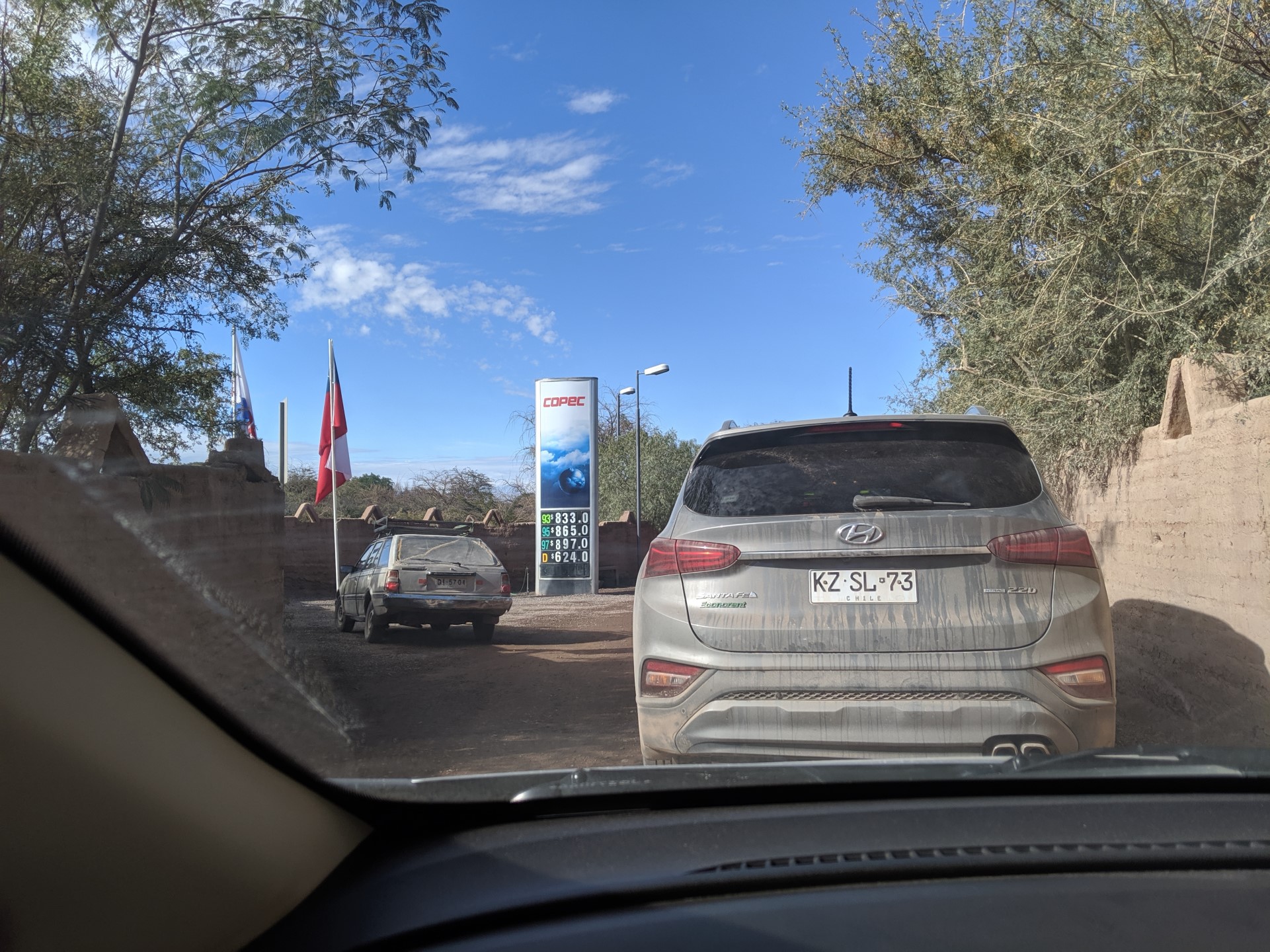 We got some great recommendations from our Airbnb host for things to do, though it quickly became clear that we hadn’t given ourselves enough time in Atacama. You could easily spend a week there exploring the various sites in the desert, all of which are unique and vastly different from each other.

San Pedro de Atacama is at an elevation of about 8000 feet, and almost immediately I started to feel the effects. My head started hurting not long after we arrived and I had to resort to an ibuprofen. Unfortunately, pretty much all the sites we wanted to go to were at higher elevations than that.

We asked our Airbnb host what she recommended we do, and she helpfully provided a map and a series of suggestions tailored to our length of stay there (thankfully she had majored in ecotourism).

Our first full day there we opted to drive south along route 23, and just about reached the border crossing with Argentina. Along the way we stopped at Laguna Salar de Talar and Laguna Tuyajto before heading back up to Laguna Chaxa. 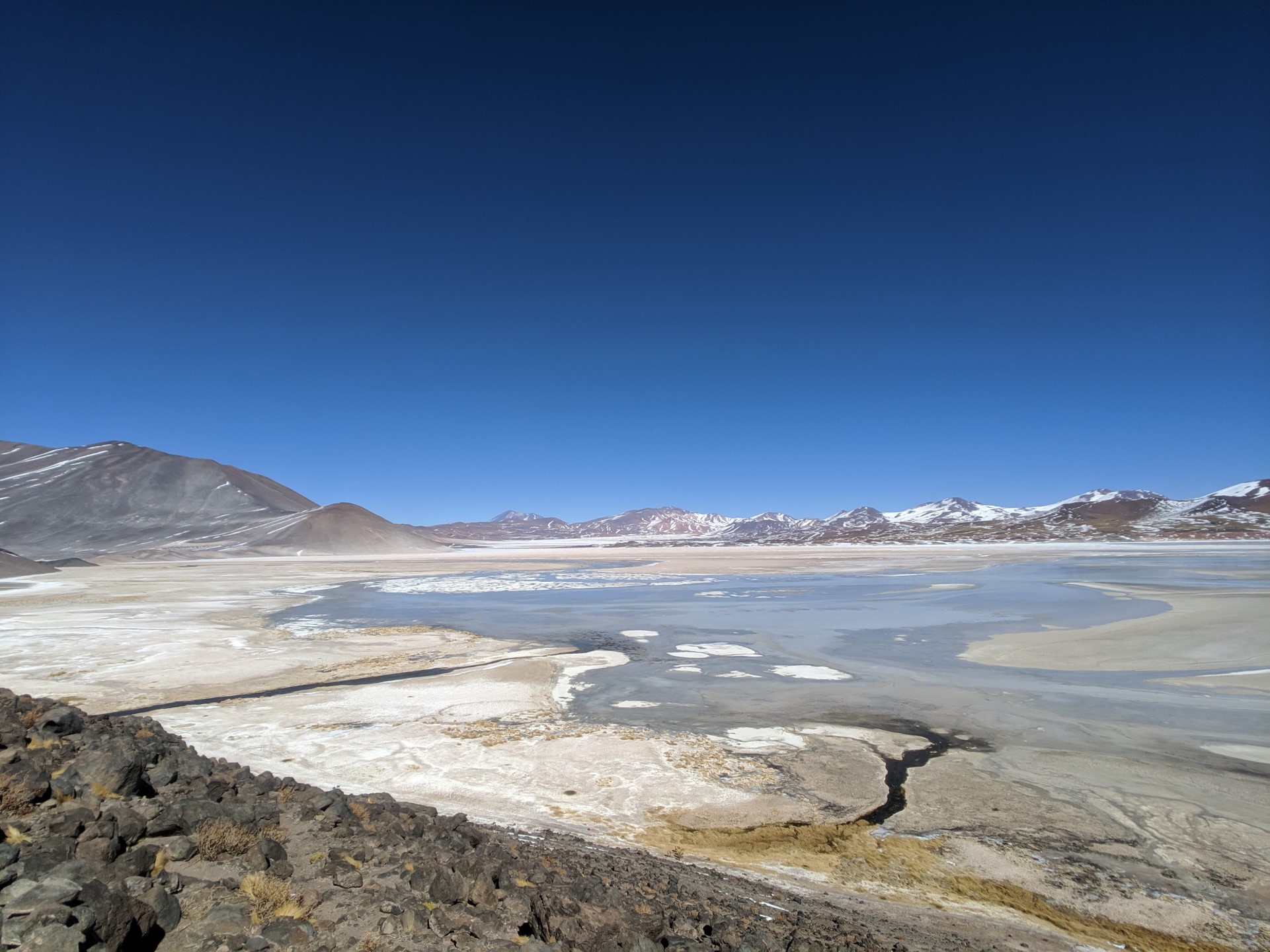 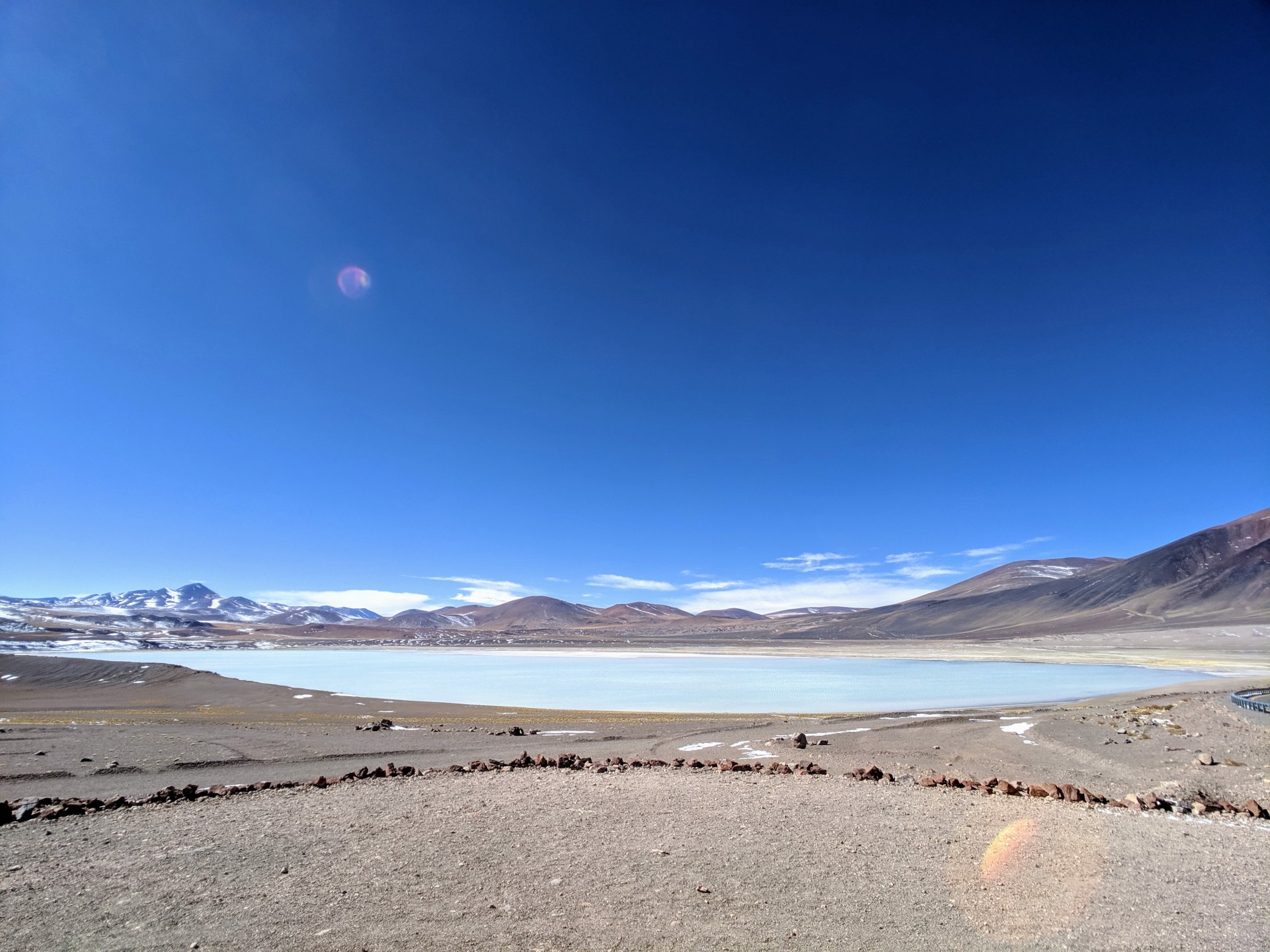 At this point we were reaching elevations close to 15,000 feet, which was a mildly unpleasant experience. We’d both taken ibuprofen in anticipation of the increased elevation, but despite that we still were both sporting mild headaches. The moment we stepped out of the car, simply taking a few steps left us out of breath. The sun was strong enough that I asked Mollie to give me my sunglasses so I could swap them out with my regular glasses… except I was already wearing my sunglasses. The winds were strong and freezing, so we were extremely cold except when the wind would stop for a few seconds, at which point we’d be extremely hot as a result of the strong sun. That being said, the views were spectacular.

We made it to Laguna Chaxa in time for sunset, and got to watch the flamingos hanging out in salty lagoon (saltier than the Dead Sea!) 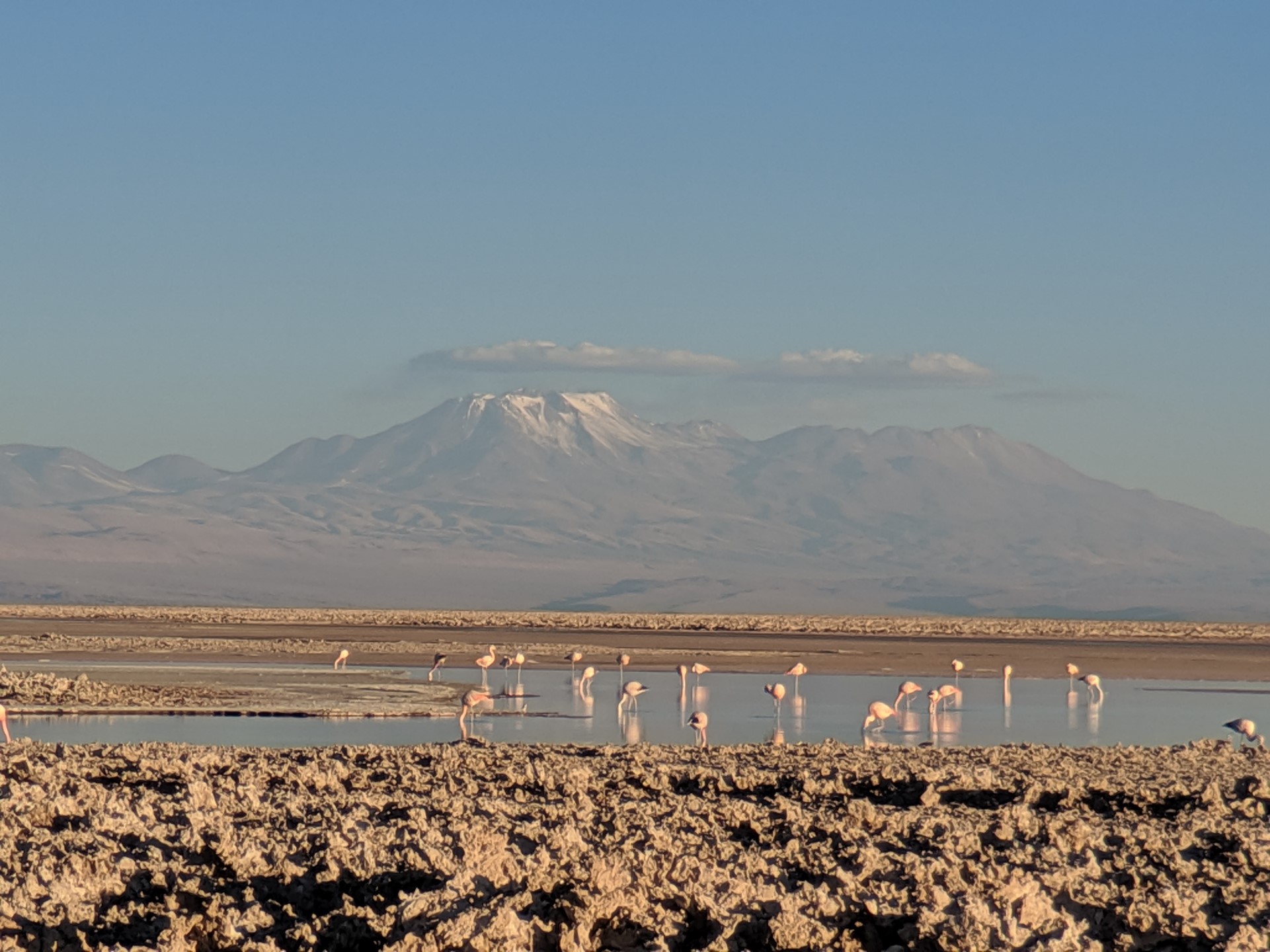 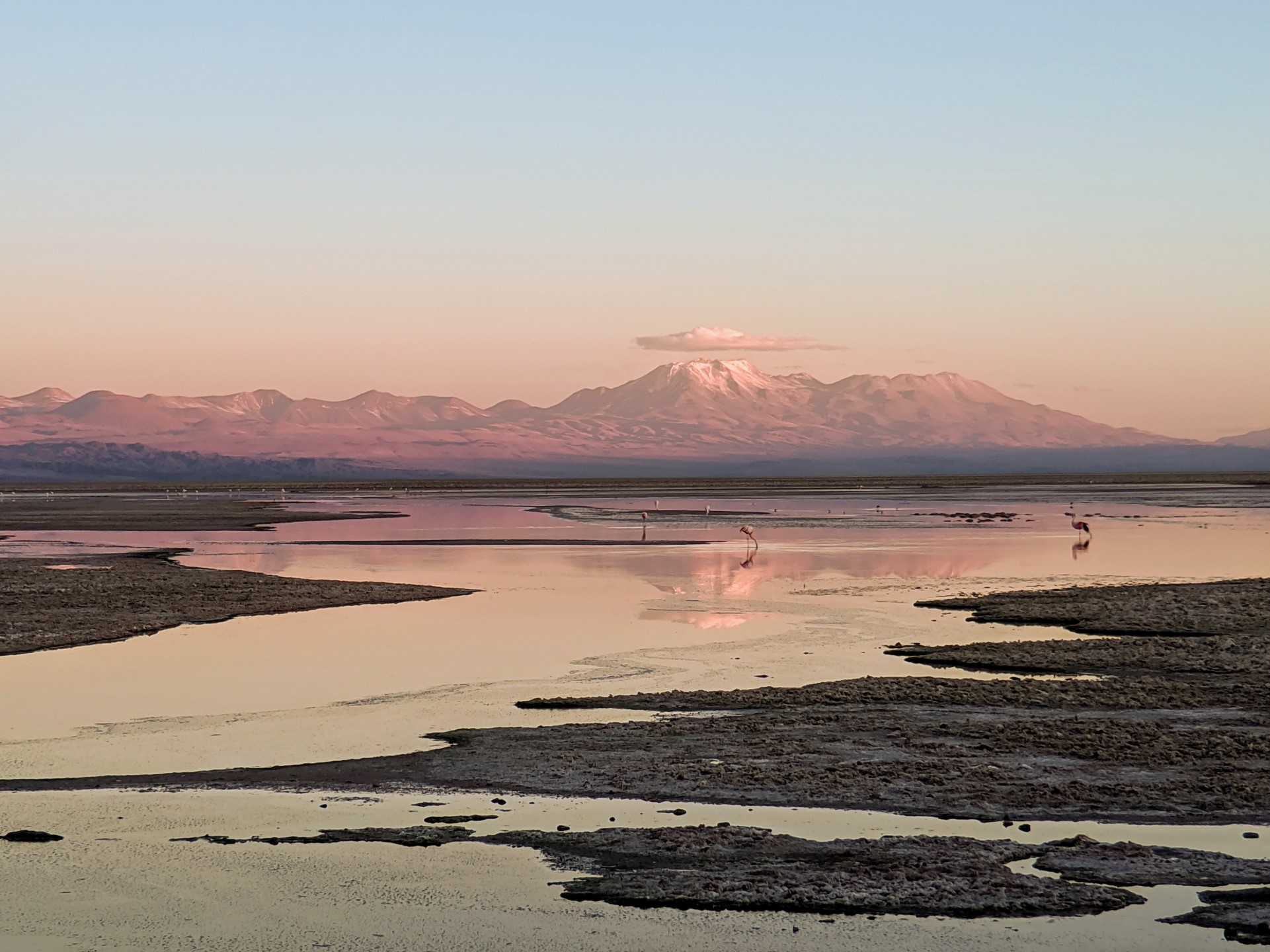 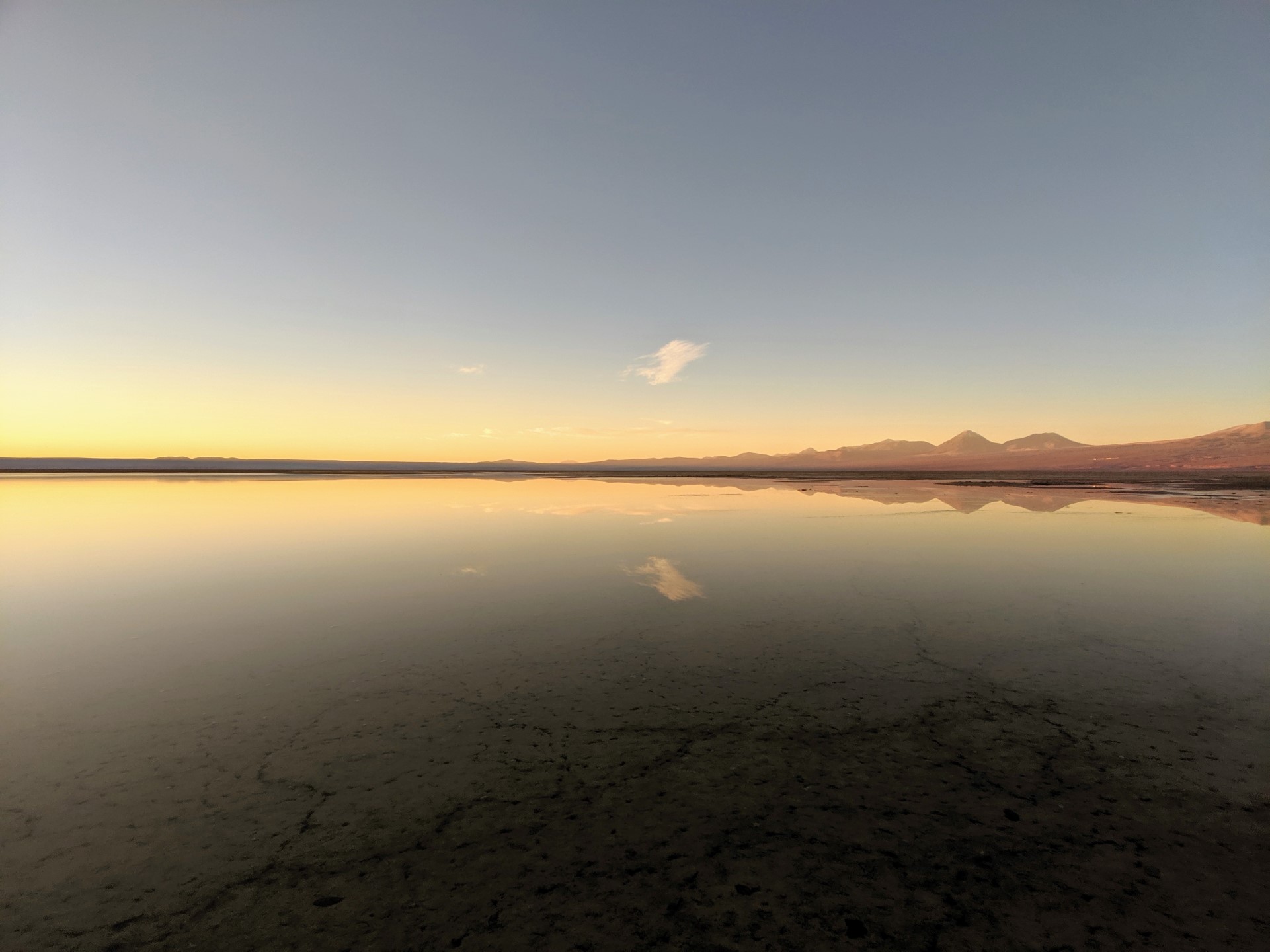 The next day we opted to spend the majority of the day in Valle de la Luna (Valley of the Moon), one of the driest spots on Earth. It has a very unique landscape that’s highly reminiscent of the moon. Pretty much nothing lives in that valley, not even insects. It was surprisingly cool due to the wind, but as a result we were constantly getting whipped in the face by high speed sand and dust which was unpleasant. 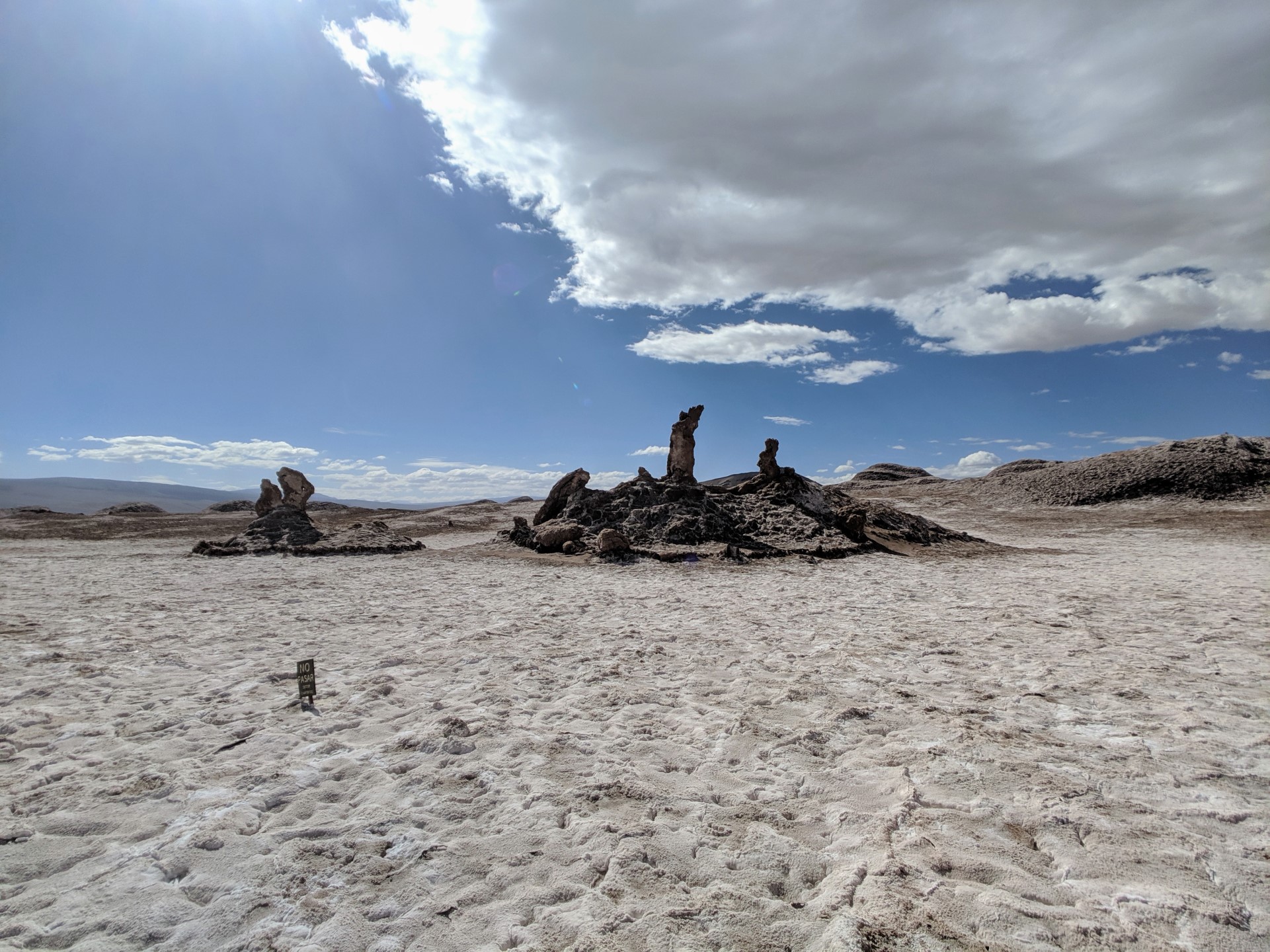 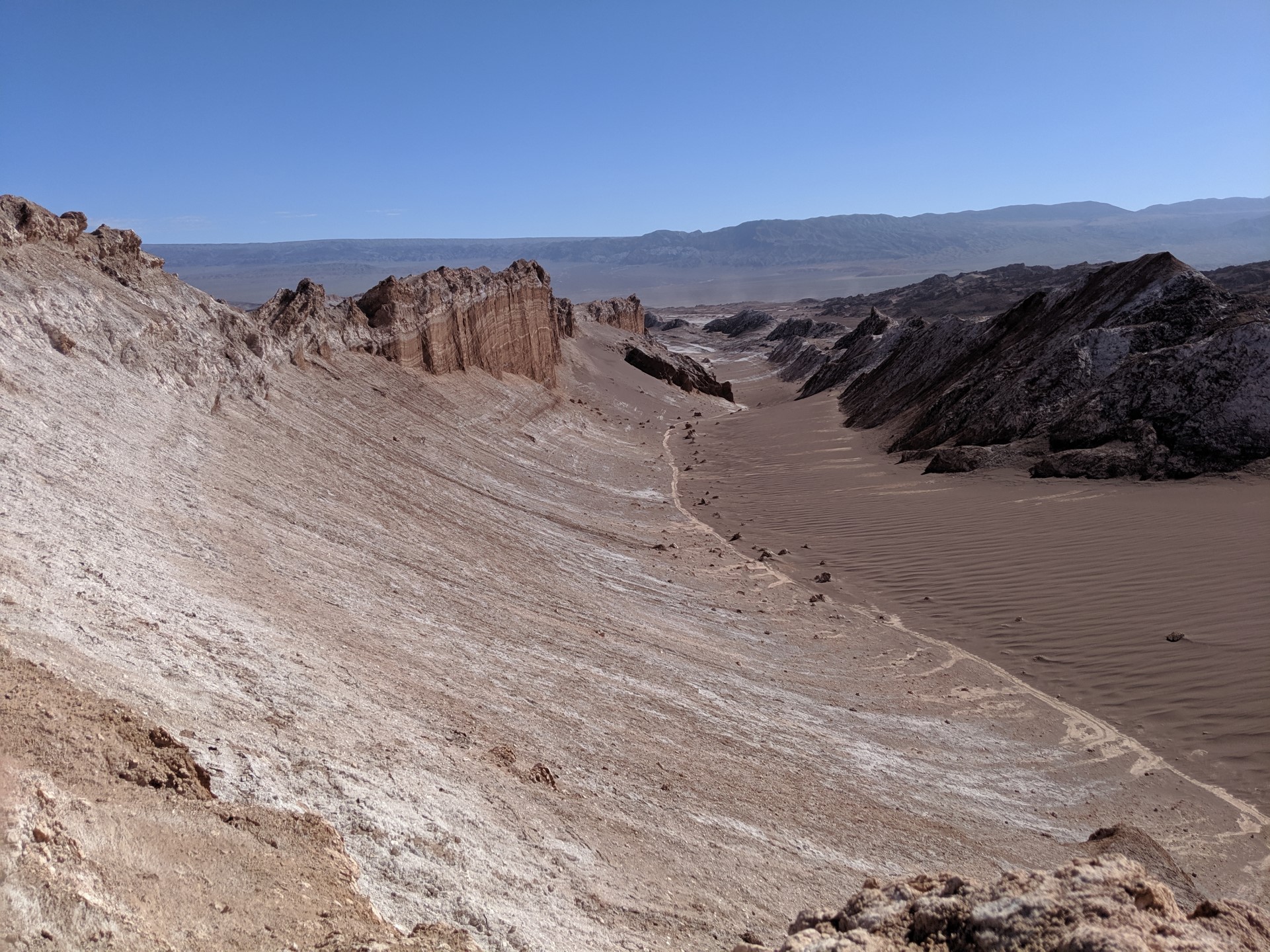 That afternoon we were told we could get great shots of the Valley of the Moon at sunset at an overlook point. The pictures were great, but it was incredibly crowded and the sun did a better job of painting the hills across from it than actually having a particularly interesting sunset. 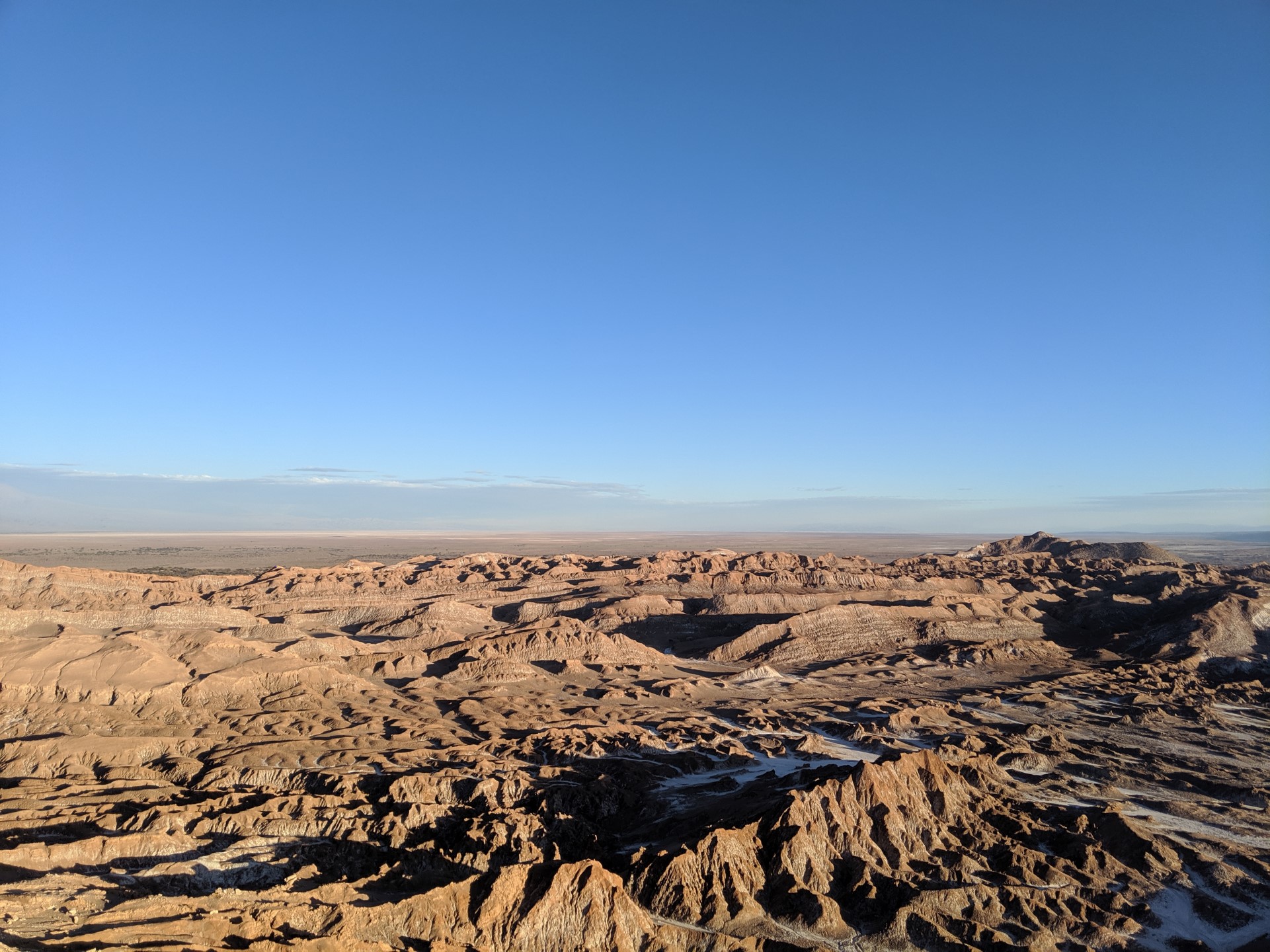 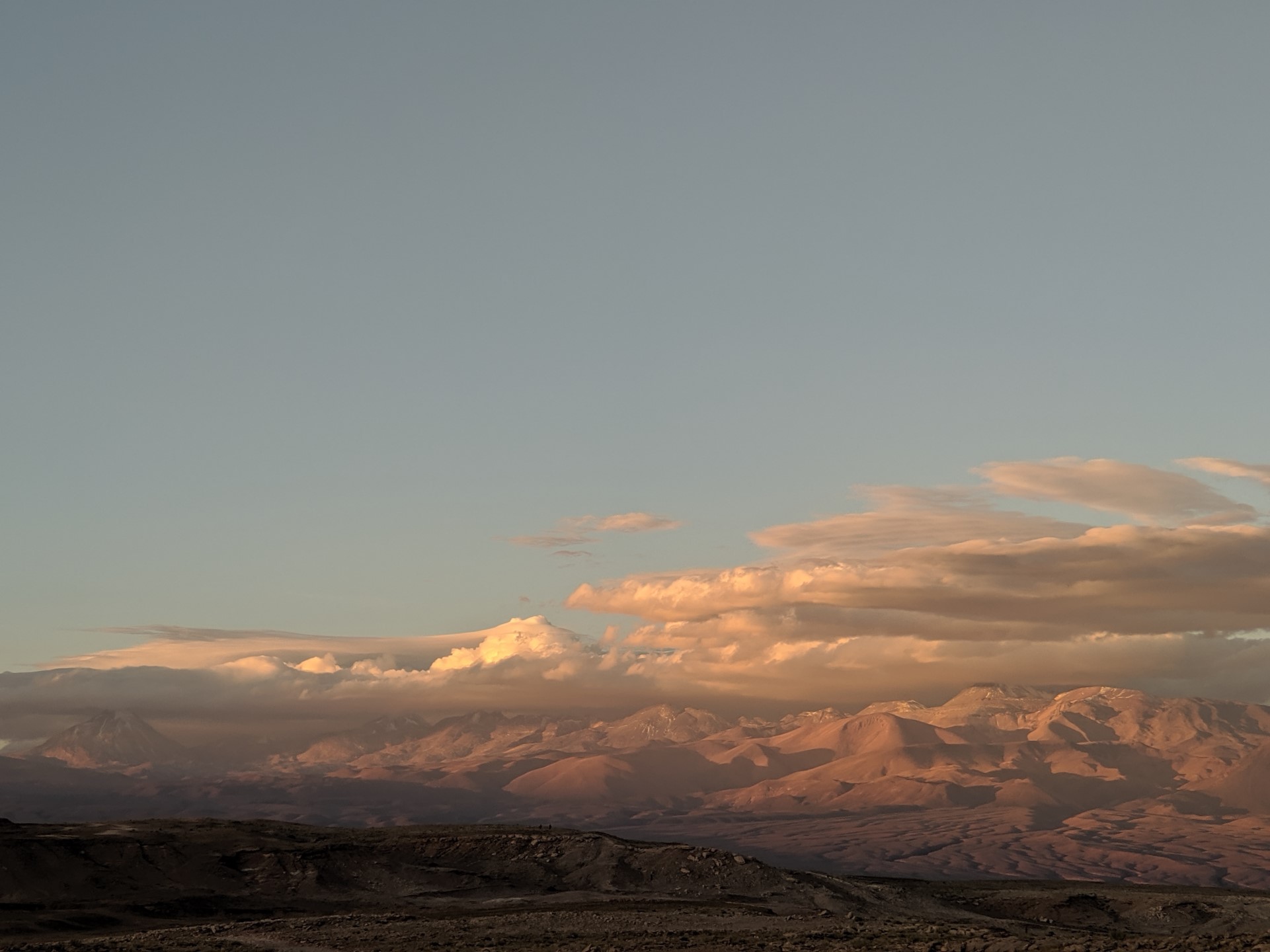 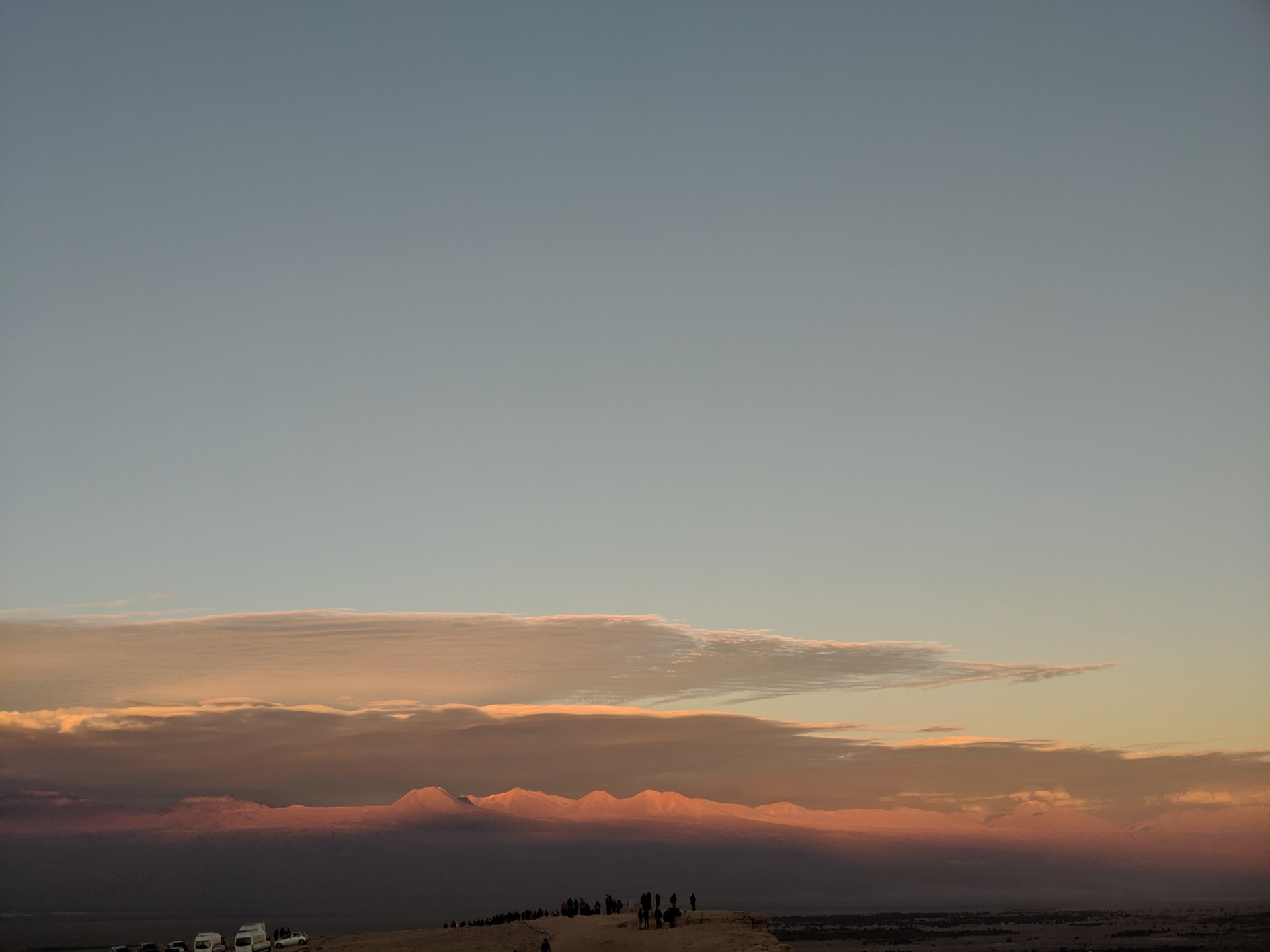 There were plenty more activities to do and sights to see in the Atacama desert that we missed out on and will have to take advantage of upon a future return. We did take advantage of the clear skies that night to do some amateur stargazing with some incredible views, though neither of our phones were capable of capturing the clarity of the stars, planets, and Milky Way.

San Pedro de Atacama was easily one of the highlights of our trip thus far, and it’s absolutely worth the trip. However, if you’re planning a trip there be sure to prepare for the high elevation (some excursions take you to 19,000 feet). Also, give yourself plenty of time to check out the wide array of landscapes!

I wish we’d opted to spend more time here. Three nights was just not enough. The scenery is varied and absolutely incredible, and there’s a ton to see and do. Like with Patagonia, I definitely feel the need to go back and explore some more.

A Must Do: Night sky tour. We didn’t really know what to expect here when we booked tickets so we thought the three nights would be enough. But there are many attractions 2-3 hours away. We didn’t get to do everything we wanted to do. Plus you need one day upon arrival to acclimate to the elevation. So we forged ahead anyways and ended up with mild altitude sickness 🤢.