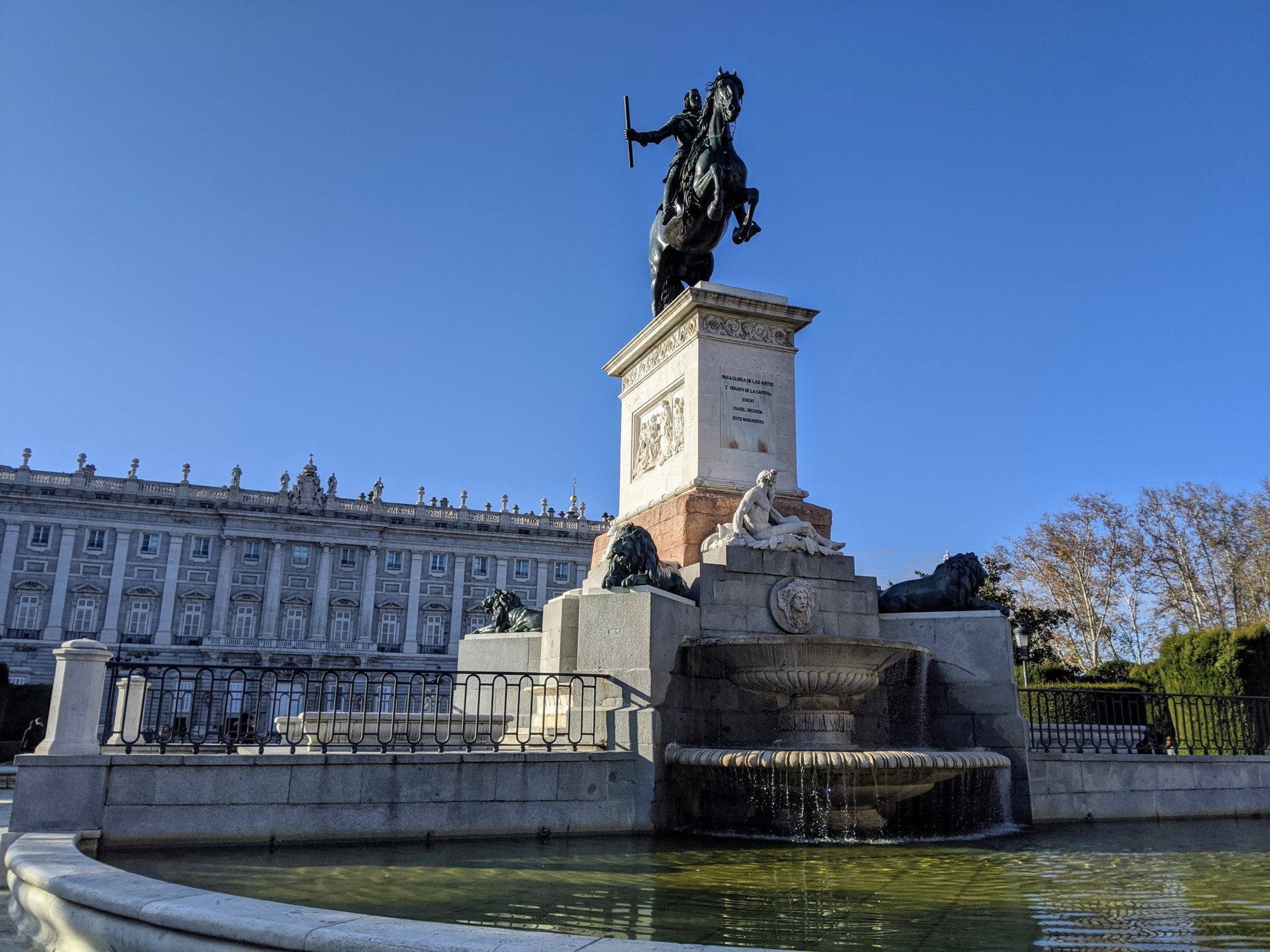 Spain’s capital city, Madrid, sits at an elevation of 2,188 feet. Compared with Barcelona’s near sea-level, it makes for quite a difference especially when considering weather and temperature in December. We left Barcelona in the mid 60s (F) and arrived to an average of ten degrees cooler in Madrid. During the daytime, the weather was cool but tolerable but once the sun set, the wind picked up and the winter chill crept in.

We took the AVE high speed train between the two cities that took only three hours despite being a journey of over 300 miles. Have I mentioned how amazing the trains in Spain are?

The architecture in Barcelona was whimsical and magical while in Madrid we found things to be much more stately and refined. Also, Madrid is much quieter than one would expect from a capital city- thanks to the brilliant idea to put the highways underground.

Though flamenco is from the Andulasia region (where Seville is), we opted to see a show in Madrid because my mother would have killed me if I brought her to Spain without going to see flamenco. I diligently researched the best option, preferring something that wouldn’t have dinner included (seems like a great way to get mediocre everything…) or be too touristy. I found Essential Flamenco which exceeded all expectations; very reasonably priced, intimate show, and no food served. There were maybe 20 people in the audience in a beautiful brick basement, with acoustic music, fantastic singing, and absolutely stunning dancers. We could not have asked for a better experience! Even the men in our group (who are not fans of dance) enjoyed themselves. 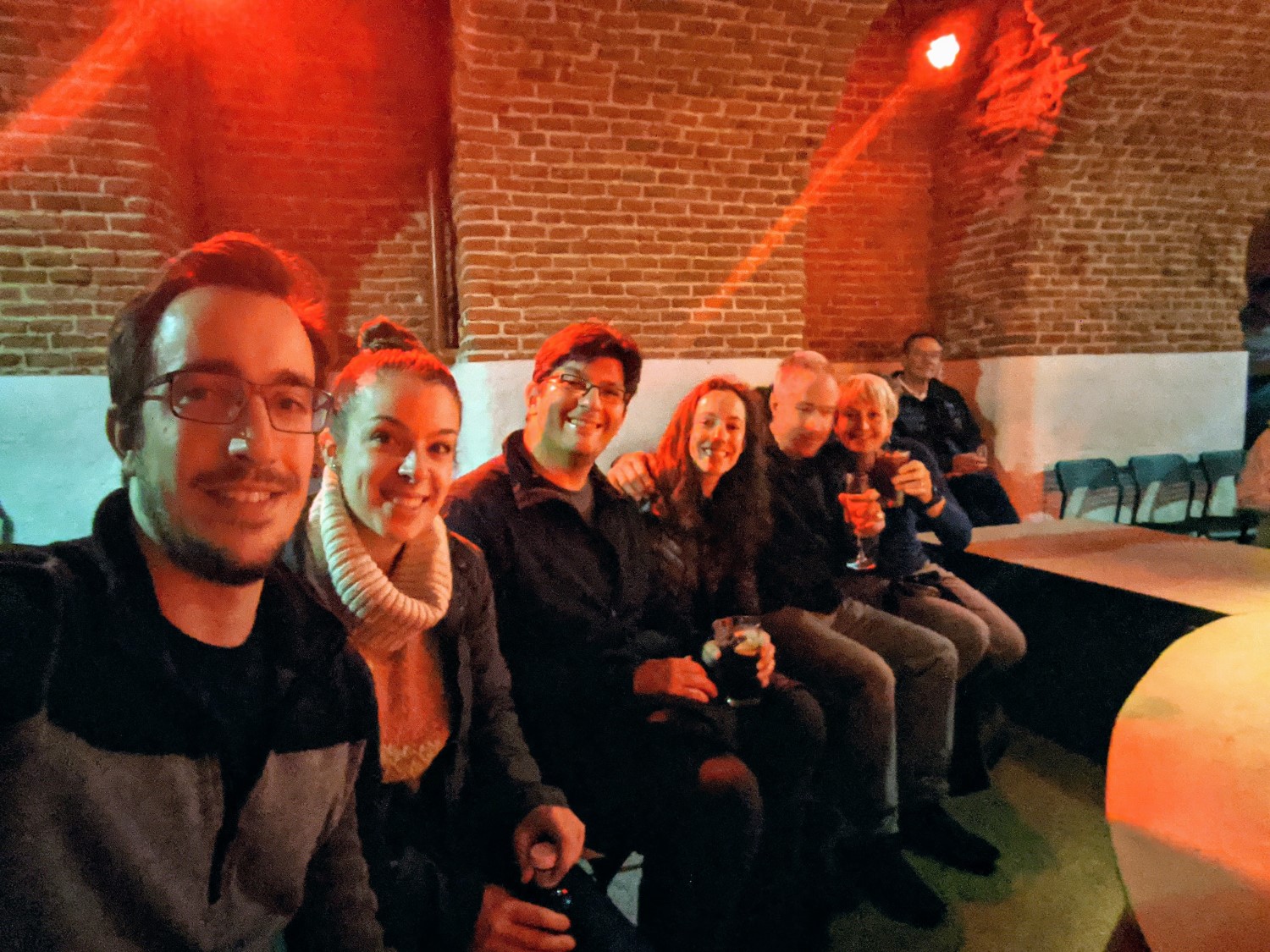 Thank you to Rick Steves for another fantastic audio walking tour that acquainted us with yet another major European city. It both began and ended at the Puerta del Sol, taking us to Plaza Mayor, past Almudena Cathedral and the Royal Palace, and down Calle del Arenal. Fittingly, we started at Kilometer 0, also known as the geographical center of Spain. 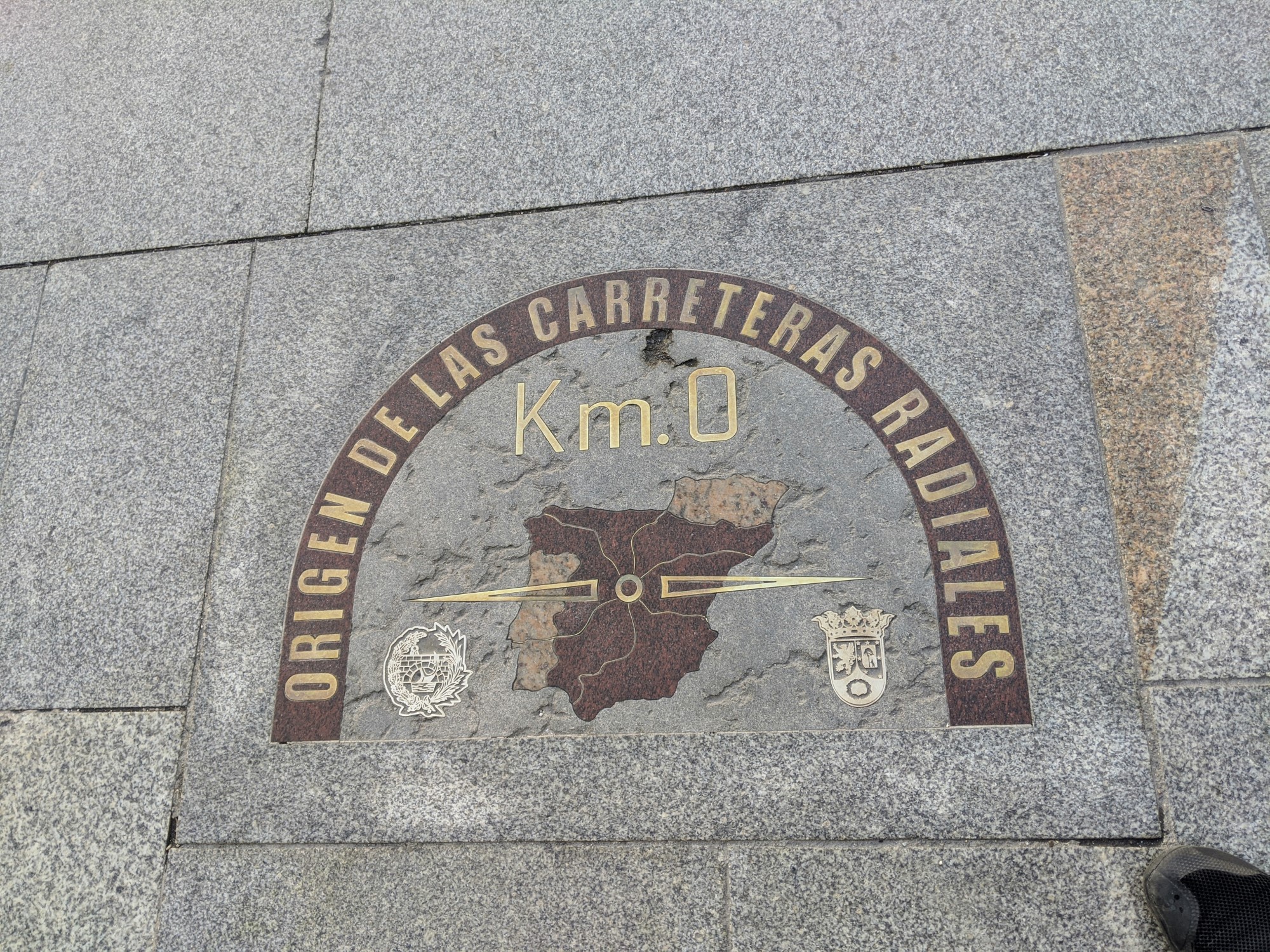 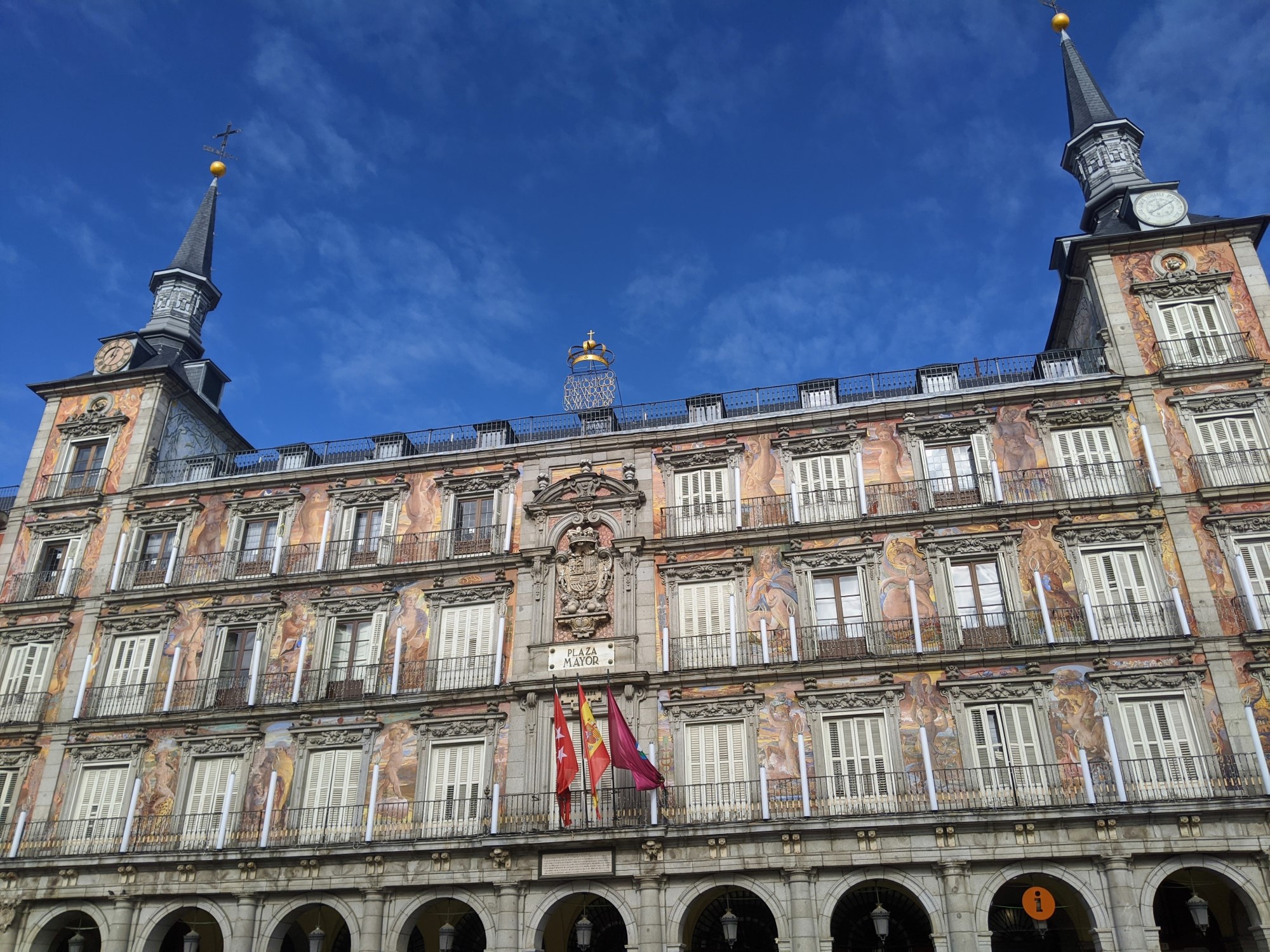 Of course we had to stop for churros… 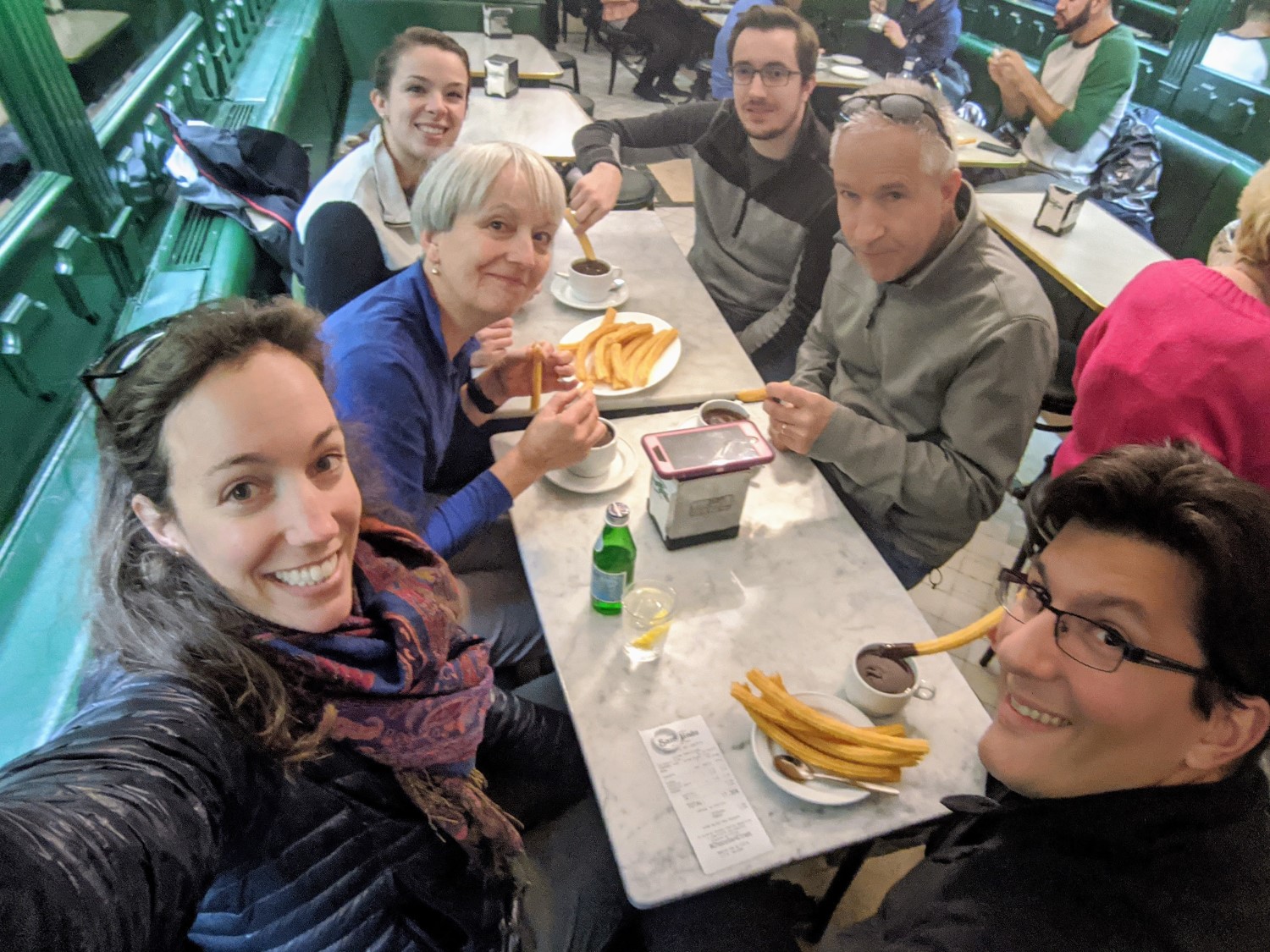 We made a priority stop at the Royal Palace. The timing was just right in that we were the first group to enter after the lunch break, so we had very few people to share the space with. 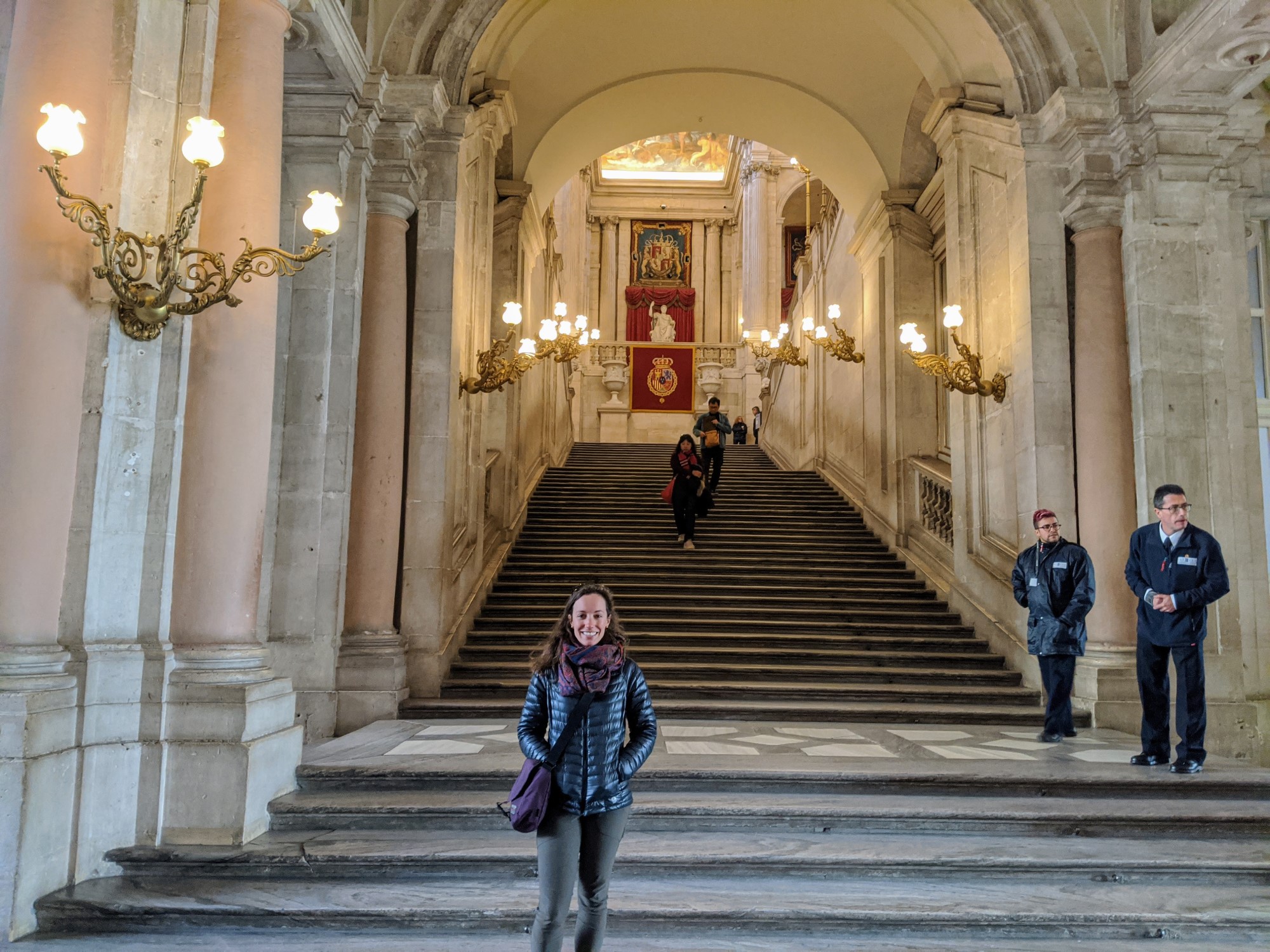 Madrid’s Royal Palace is nearly on par with the Vatican, just to give you an idea of the opulence and grandiose interior. Many of the rooms do not allow photographs, so I encourage you to check out their Instagram. 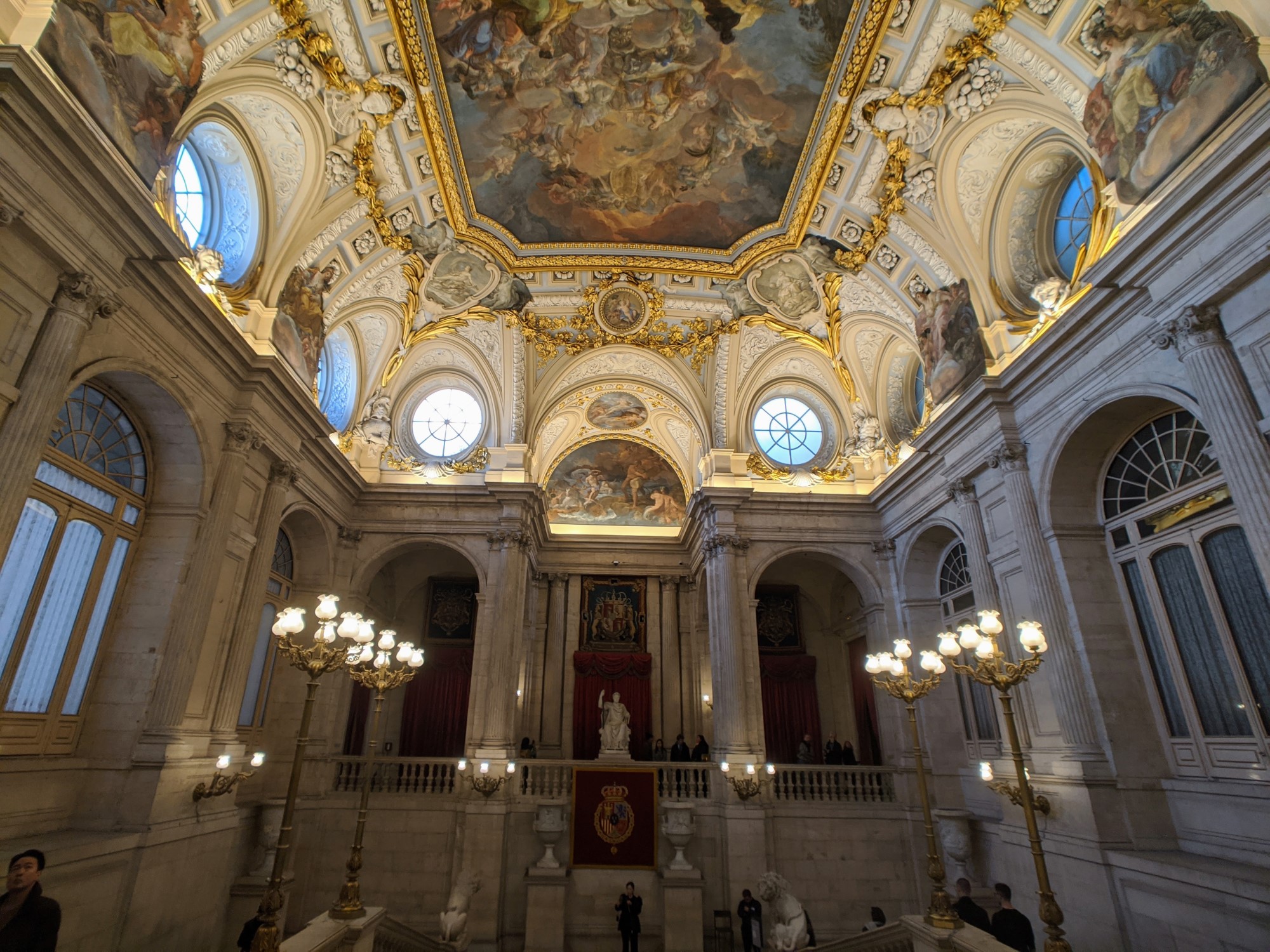 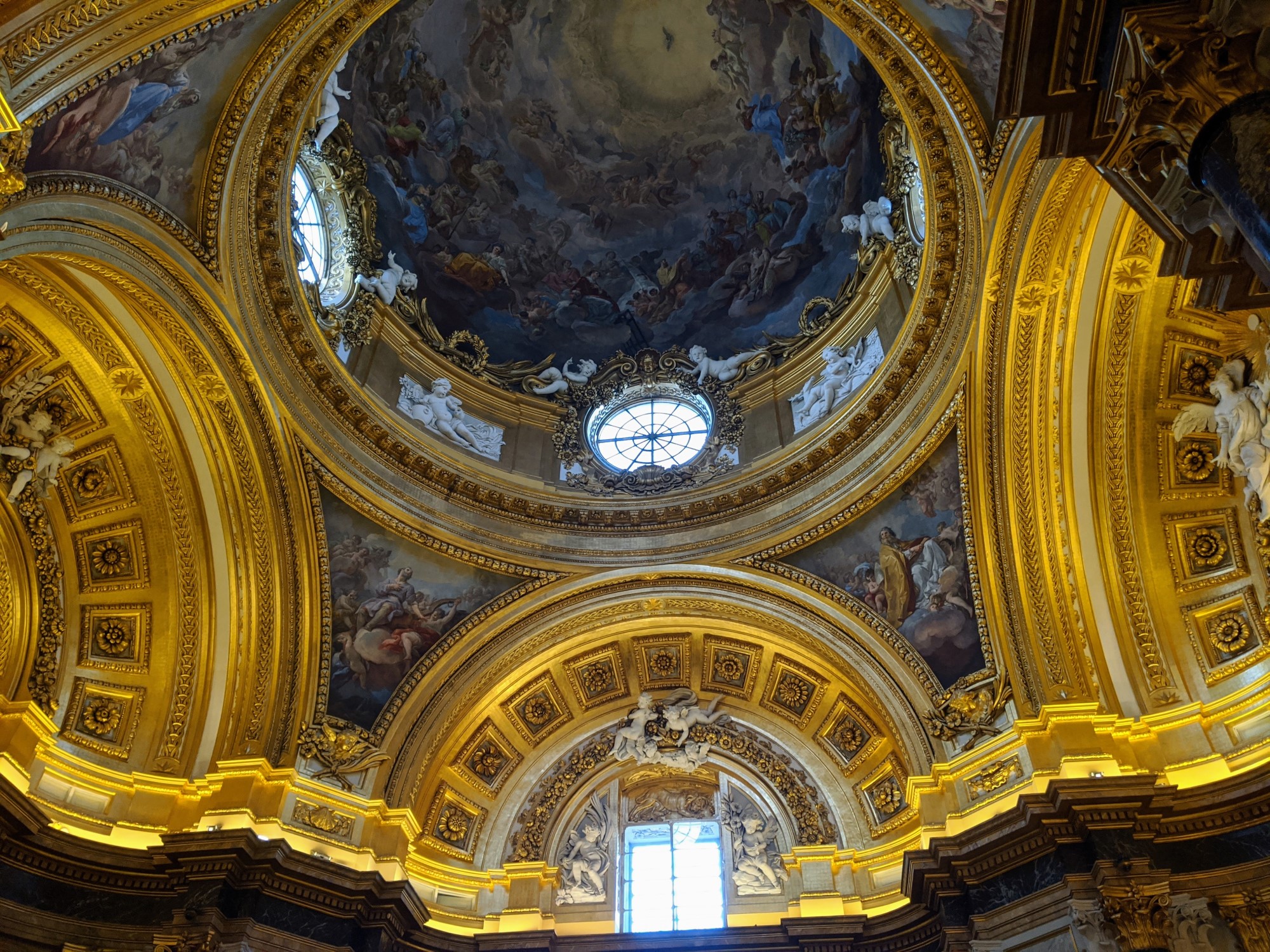 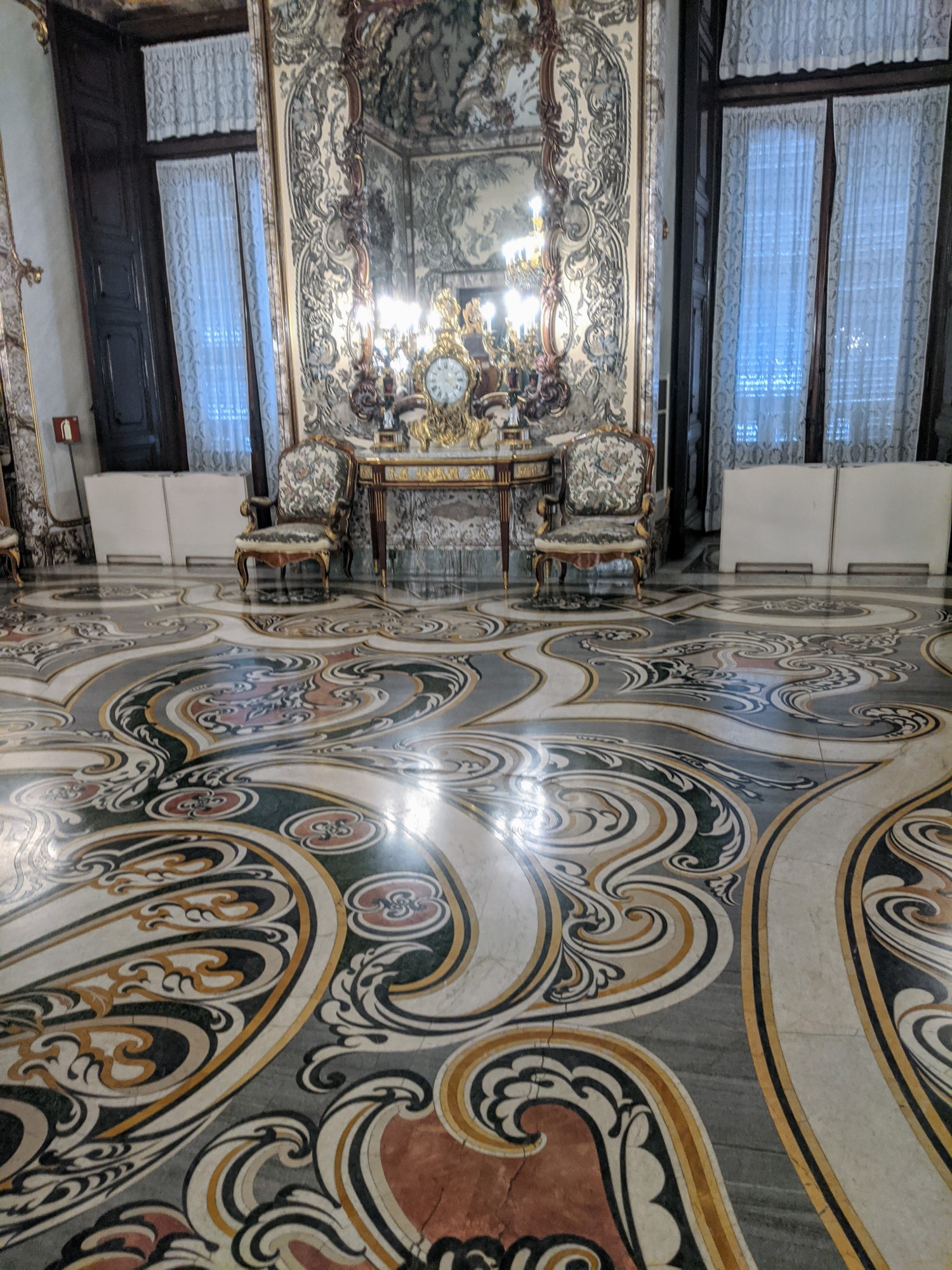 Yet another thing we adored about Madrid: the holiday lights. 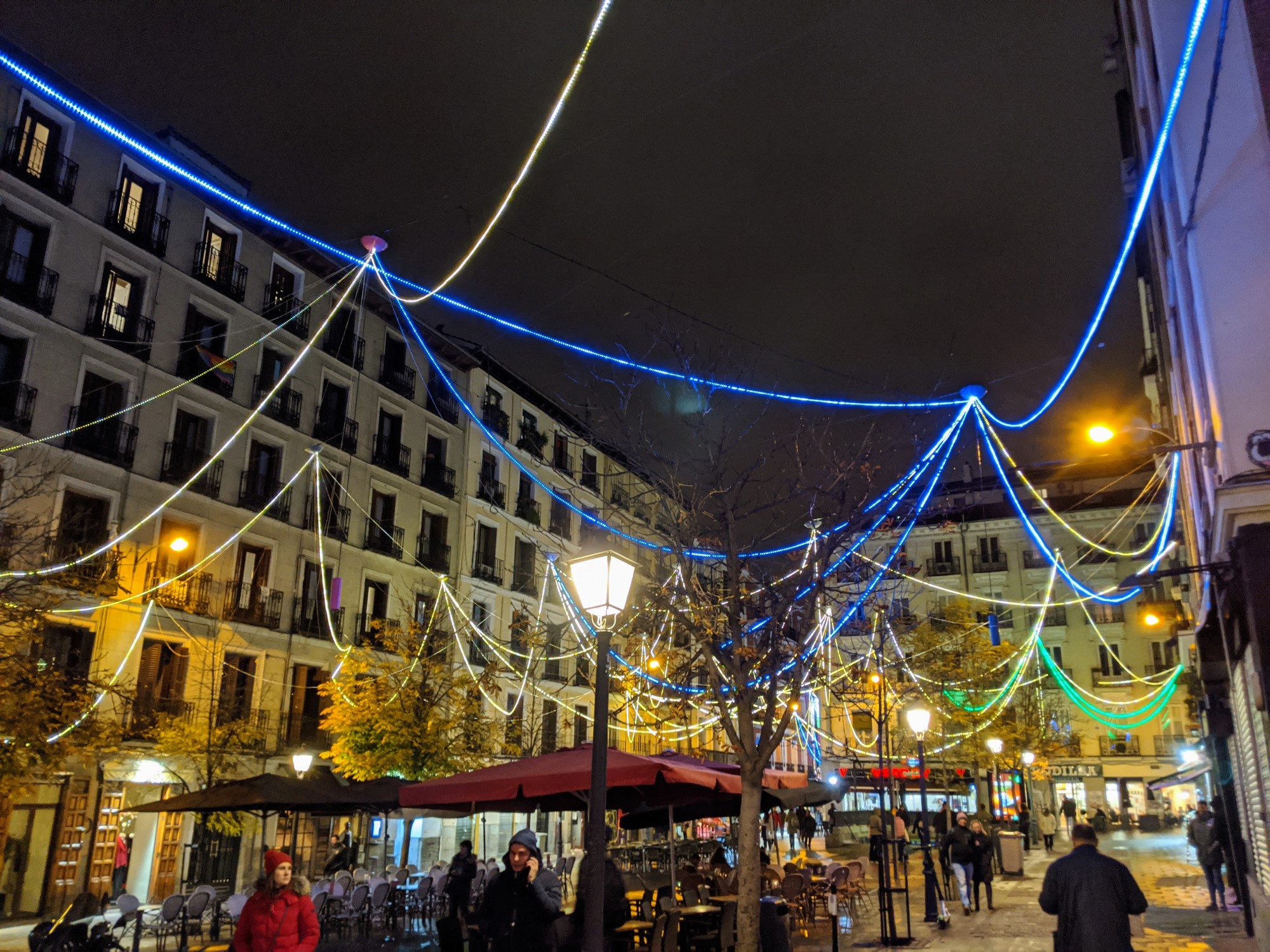 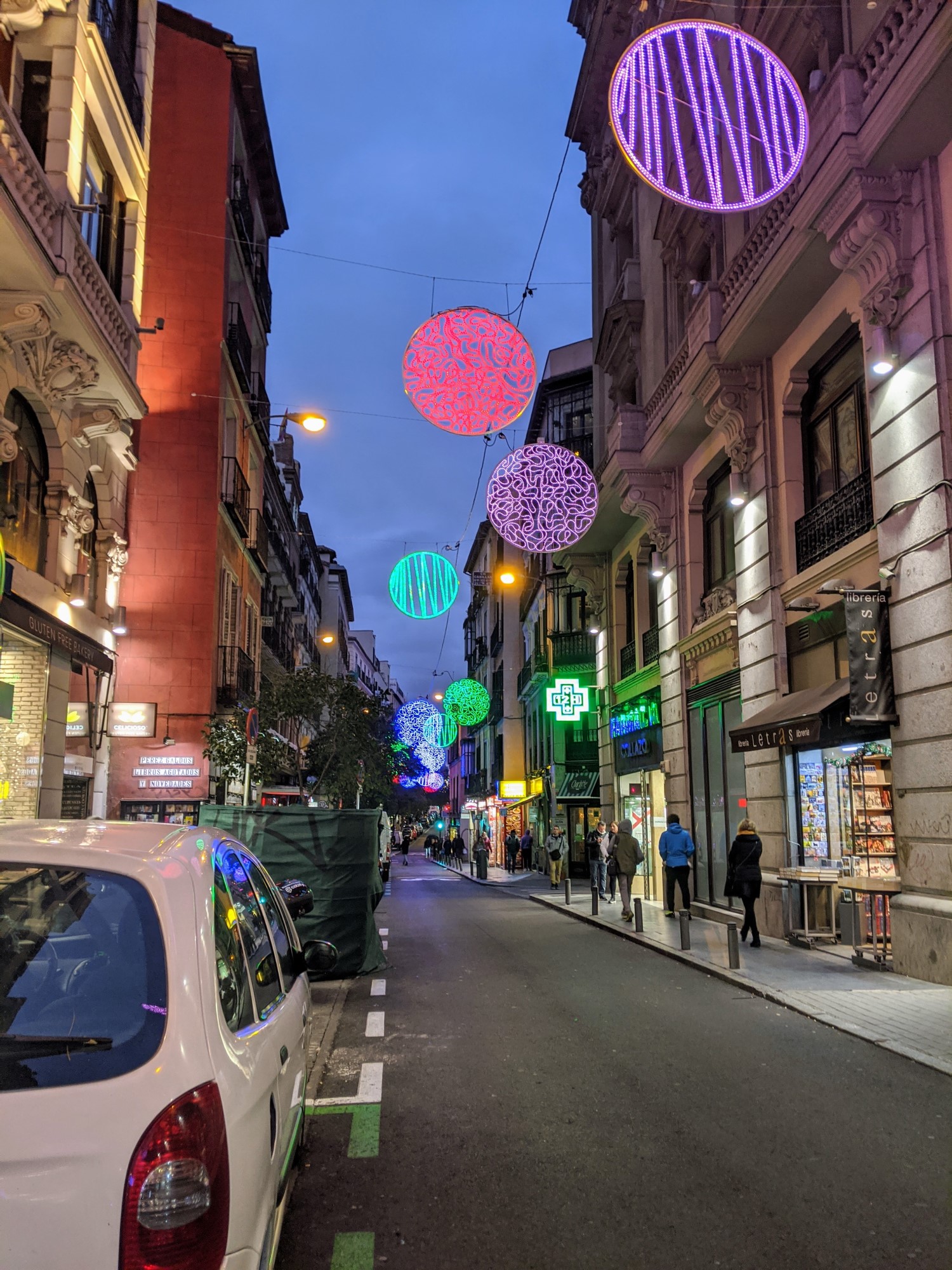 If it wasn’t so cold at night we would certainly have wandered the entire city to better explore the festive atmosphere. Nonetheless, we were able to enjoy the decorations walking to and from our destinations. The lighting absolutely added to the magnificence that is Madrid, and I look forward to returning in the future.

Unfortunately we only had ~3 days here, one of which I spent bedridden due to food poisoning. We totally missed out on the art scene but did, of course, find plenty of excellent coffee!

Painting can be seen here. (NSFW)

Madrid is a really cool and unique city. If I had to choose, I’d probably say I’d rather live in Barcelona, but there’s still so much to see and do in Madrid. Also, my cousin and his wife have since moved there, and it’d be fantastic to visit again with some local knowledge!

We definitely did not have enough time in Madrid- I look forward to returning!